Skip to main content
You are using an outdated browser. Please upgrade your browser to improve your experience.
Blog Home > Employee Stories

Why this LendingTree employee dreaded sharing her pregnancy news

It took me five months to tell my new boss at my new job that I was pregnant. Why? I was afraid of backlash. But instead of punishing glares or snide comments, at LendingTree, I got support, resources and a whole lot of congratulations from teammates and colleagues.

The sad truth is, though, that my story isn’t every mother’s story. I know exactly why I was nervous to break the news. Hopefully, by sharing my experiences, I can help encourage other women (and men) who are concerned about facing the stigma of having children while ascending the corporate ladder.

It was about a month or two into lockdown when I got baby fever. With a husband in the concert industry, I was used to a life of traveling around the world, expensive dinners and late nights out. A baby was never on my mind. However, as the weeks of lockdown rolled by, I started experiencing what some may call a more “normal life.” The husband and I got used to having each other around, our meal plans became more extensive and those board games that had collected dust in the closet became our daily excitement. For the first time in nearly 10 years, we were spending more than a few days or weeks together and it was, surprisingly, going well.

That baby itch never went away, though. If anything, it grew stronger. After some discussions with my husband about finances, family planning and all the other serious things that go with it, he was on board — let the games begin.

I want to point out here that getting pregnant isn’t exactly as easy as they made it seem in health class. No, one drop is not going to necessarily “do the trick”. Turns out, it’s hard work involving hormones, scheduling and way too many late nights on Google. As we tried for a baby for months and months, I watched as the “perfect timing” passed by. Then, I got a major opportunity by way of LendingTree.

I’ve always struggled to find my place in the corporate world. I began my career as a news anchor and reporter, jumping from station to station. After years of ambulance-chasing, always being on call and the daily grind of news life, I stepped out of TV to try to shatter the so-called glass ceiling. It’s taken six years of playing corporate chutes and ladders to find the right job. When LendingTree gave me a call, it sounded like the perfect opportunity.

After months of negotiations, role discussions and navigating the pandemic, we finally settled on a mid-September start date. It was finally happening. I was about to get my dream job at a time in the world when that was hard to come by.

My first week at LendingTree was everything I hoped for. I felt like I had finally landed in a place that could foster my development and leverage my skills while I struck that elusively perfect work/life balance. Then came the question from the husband: “What should we do about the baby situation?”

A question, I assume, that’s all too familiar to many aspiring mothers. Do we hold off while I build up my reputation at the company? Do we put our personal life first or is it best to put our family aspirations on hold?

The thought of holding off after so many months of trying wasn’t an option in my mind. Nothing had happened up to this point, so this “one time” probably wasn’t going to make a difference. What seemed like good logic to me was likely heavily influenced by the wine.

Hiding in plain sight, with baby

For the next several months, I became a master of disguise. Zoom happy hour? No problem, I have a mocktail for that. My social media accounts were locked down; no picture was going to get by me without being carefully selected to be as slimming as possible. It all became an obsession, but why? Why was I so afraid for my new job to learn I was pregnant? I had plenty of coworkers with kids that made regular appearances in Zoom meetings. Employee families seemed to be embraced and part of regular, everyday discussions. Yet, I had this fear that the trajectory of my career would become static if I shared my good news.

I began dreading the conversation with my boss. How would I tell her? What would happen to my career when I did? After five months, I asked her to meet me on a video call. I couldn’t even look her in the eye. I think I actually covered my face when I told her. The first words out of her mouth were, “Vita, this is amazing news! A baby is a good thing. Why are you so worried?”

She was right. Why was I so worried? I’ve got an idea.

At other companies, I heard the whispers at the water cooler about the woman who was taking too much time on her breastfeeding breaks, or the one who was working from home too often because her kids kept getting sick.

I’ve seen promising careers sidelined because a pregnant, one-man-band female reporter couldn’t carry the 50 pounds of equipment needed to do her job, and the company wouldn’t make any concessions. The worst part? Most of these women never felt like they had a voice to stand up for themselves. They put their heads down, managed the best they could and suffered in silence for fear of retaliation or termination. 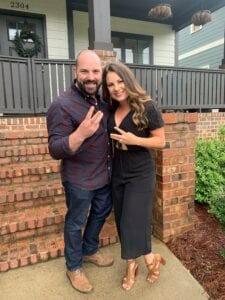 To say that LendingTree went above my expectations is an understatement. My news was embraced, congratulated and supported. I learned of companywide resources available to soon-to-be and current parents. The company helped me make a plan for my maternity leave and opportunities to advance my career continued.

While my story is a happy one, not everyone is as lucky, especially during a pandemic. A LendingTree survey found that 31% of parents said the hardest part of the pandemic has been trying to work from home while taking care of kids.

We need to do more to empower women, working moms and all working parents. This is not a female-only issue. Several male colleagues have shared similar stories and fears of asking for paternity leave or time off to care for and spend time with their children.

If there’s one thing we can learn from the pandemic, it’s that a better work/life balance is critical to a company’s success. Employees shouldn’t have to choose between being promoted and becoming a parent. The more companies adopt and embrace this culture, the more we can change society’s perception of what it means to have a family and a career.