More Than 4 in 10 Consumers Spent Less During Pandemic, but Not Everyone Had That Luxury

More than 40% of Americans are spending less during the coronavirus pandemic, according to the second report in a three-part series from personal finance app Stash and LendingTree. However, not everyone has been fortunate enough to be able to afford that. And for some, there have even been increases in spending.

Here’s a breakdown of our findings, including what Americans are spending money on and how things have changed since the onset of the pandemic.

As might be expected, the ability to spend less during the pandemic is largely tied to income, with those earning more being able to do so with greater frequency. The same sentiment applied when it comes to those who have spent more during this time. 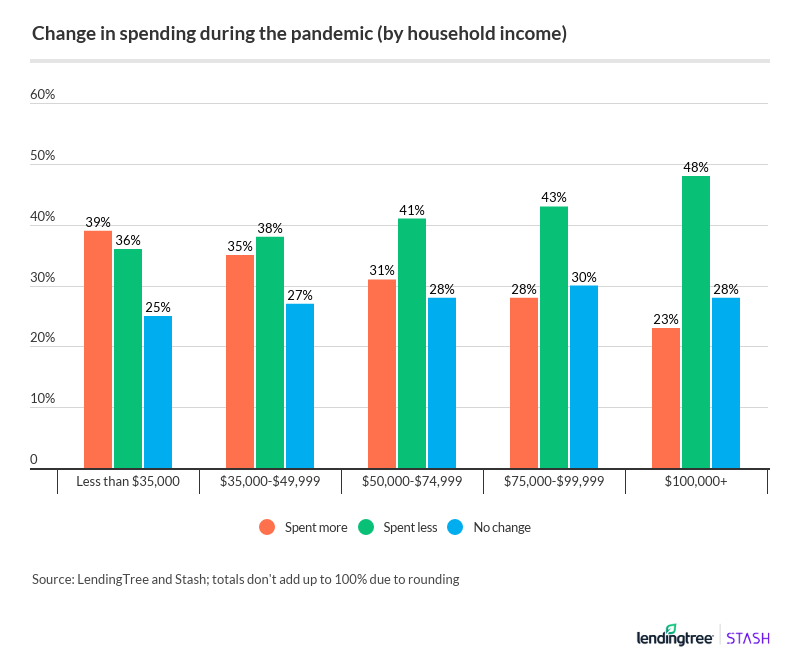 Additionally, Black and Latino consumers were less likely to trim their spending than white and Asian consumers. On the other hand, there didn’t appear to be a substantial gap in spending habits from a gender perspective, though women (33%) were slightly more likely to spend more than men (30%).

Where Americans changed their spending habits

The pandemic has changed so much in American life, and that includes the way consumers are spending their money. For example, just over a third of Americans spent money in entirely new categories during the coronavirus crisis. Of those who said this, the top new categories they spent in included:

Although only about 18% of respondents to the survey said they spent more on telemedicine or online therapy, there were certain segments that did so at greater rates.

For example, 21% of women increased spending on telemedicine or online therapy, versus 15% of men. And 21% of white Americans said they increased their spending in this category during the pandemic.

Younger Americans were more likely to spend on home office furniture and tech support. In fact, 29% of millennials and 26% of Gen Zers increased spending there, versus 21% of Gen Xers and 14% of baby boomers.

Although many of the spending patterns made sense given the changes the pandemic has brought, that didn’t always hold true for every category.

For example, although 67% of consumers decreased spending on dining out and/or nightlife, 22% of Gen Zers increased their spending in the category. And the silent generation (25%) was the most likely, by a wide margin, to spend money on travel for the first time during the pandemic. 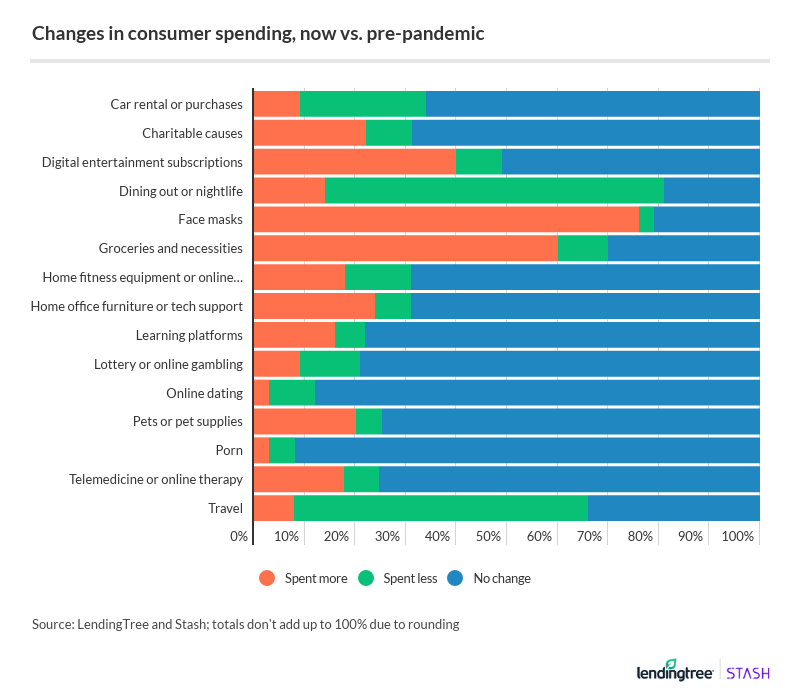 How spending habits are changing amid reopenings

Overall, almost 40% of Americans are spending less, though their reasons for doing so vary. And almost a quarter of those who earned less than $35,000 a year said they spent less because their employment status changed and required them to spend less.

“With parts of the country — and daily life — still closed down, now may be a good time to focus on building up your emergency fund, especially if you needed to tap it during the peak of the pandemic,” said Jeremy Quittner, resident money expert and editorial director at Stash. “For example, consider saving or investing the money you would regularly be spending on monthly commuter costs, travel or dining out.” 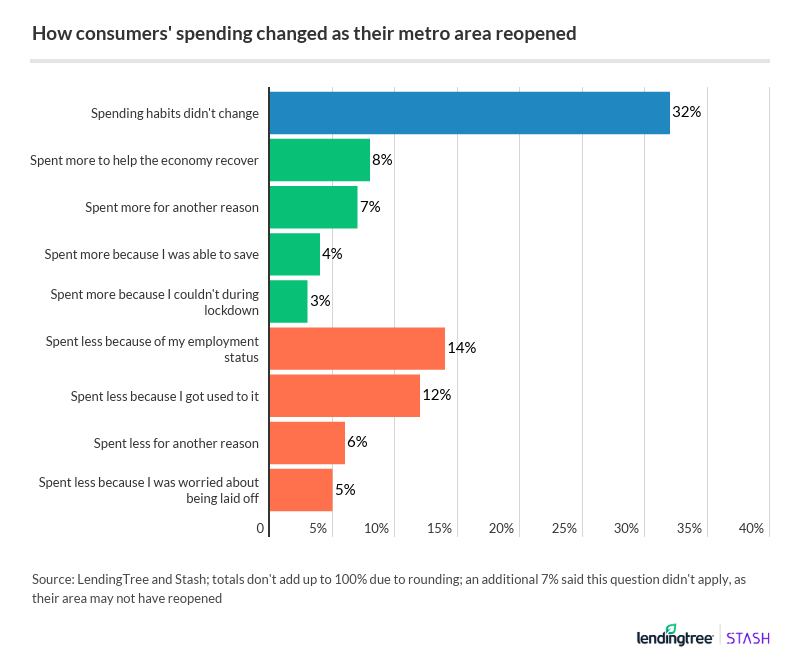 Not everyone changed their spending habits, though it’s worth noting that this may be due to the inability to cut costs, rather than an indication of economic stability.

“People are going to remain cautious for some time,” said Matt Schulz, LendingTree’s chief credit analyst. “Once a treatment or vaccine comes, I think the explosion in pent-up demand is going to be absolutely monumental. People want to buy. People want to get on airplanes and stay in hotels. They want to see their favorite band or team in person. That hasn’t changed.”

According to LendingTree data, credit card balances dropped in 90 of the 100 biggest U.S. metros between January and July 2020, while the average balance decline was 7%, or more than $400. Here are some other highlights from the data:

“When the pandemic began, I never would’ve expected it to shrink credit card balances, but that’s exactly what happened,” Schulz said.

This makes sense, he said, when you consider the fact that people had fewer places to spend money due to the lockdowns, as well as the boost Americans got from the economic impact payments and — for a period — $600-per-week unemployment benefits. This is in line with the rest of the data showing a large swath of Americans decreasing their spending.

“To their credit, many people took that extra money and put it toward knocking down debt,” Schulz said. “Then, once the debt was handled, they saved it. That’s left many Americans in a far stronger position financially today than they were when the pandemic began. If there’s one thing the pandemic has taught us, it’s this: We don’t have any idea when the next rainy day is coming or how hard it’ll hit, but you need to prepare for it while the sun is still shining.”

The importance of being able to weather times of financial turmoil has become all the more evident during the pandemic. Just over half of Americans feared for their job during the pandemic, 30% of which said that fear prompted them to save more money. 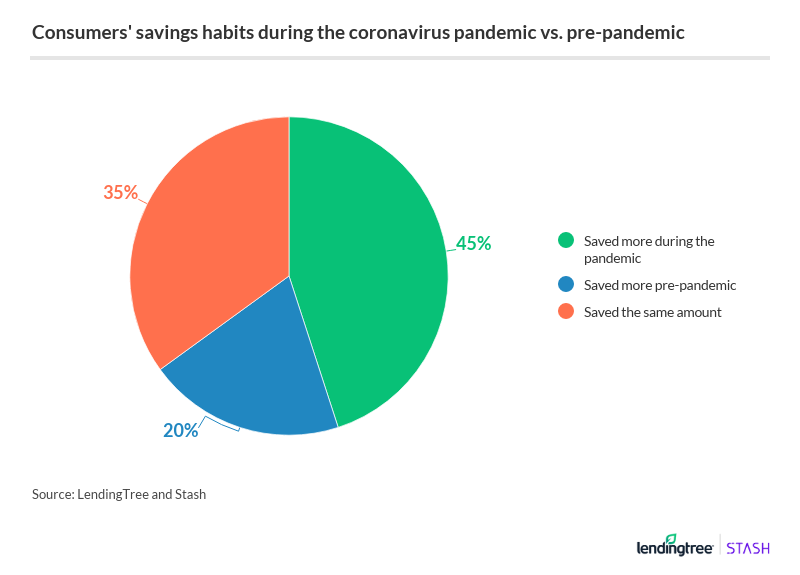 “While many people are struggling to make ends meet, the other side of the coin are those whose income has not been impacted by the pandemic,” said Sarah Berger, LendingTree’s millennial finance columnist.

She adds that for those who haven’t had a change in income, there’s likely an overall decrease in spending due to lifestyle changes (for example, less travel, dining out and certain entertainment expenses, as well as the ability to save their economic impact checks).

In general, saving money can be more difficult during this time of financial uncertainty, but there are methods consumers should focus on to boost their savings:

Generations are defined as the following as of August 2020:

Stash is a Paid Partner of LendingTree, LLC NMLS# 1136. LendingTree is a minority Shareholder of Stash.

Investment advisory services offered by Stash Investments LLC, an SEC registered investment adviser. This information is for informational and educational purposes only, represents an assessment of the market environment as of the date of publication, is not intended as investment, legal or tax advice and is subject to change without notice. The information should not be relied upon by the reader as research or investment advice regarding any issuer or security in particular. Bank Account Services provided by and Stash Visa Debit Card issued by Green Dot Bank, Member FDIC, pursuant to a license from Visa U.S.A. Inc. Investment products and services provided by Stash Investments LLC, not Green Dot Bank, and are Not FDIC Insured, Not Bank Guaranteed and May Lose Value.

More Than 4 in 10 Consumers Spent Less During Pandemic, but Not Everyone Had That Luxury

Just over 4 in 10 Americans cut spending amid the coronavirus pandemic, according to the second report in a three-part series from Stash and LendingTree.