You are using an outdated browser. Please upgrade your browser to improve your experience.
Personal Finance
How Does LendingTree Get Paid?

Places Where Millennials Carry the Most Debt (Non-Mortgage)

Student loans make up the biggest share of millennial debt, but auto loans are close behind.

The typical urban millennial carries significant debt, a new LendingTree study found. It revealed that the median debt balance for millennials living in the 50 biggest U.S. cities is $23,064.

“The millennial generation makes up the younger portion of adults, and as they build their careers, families and communities, they’re doing it encumbered by personal debt,” said Kali McFadden, the LendingTree senior research analyst who led the study.

But where have millennials gotten into the deepest debt? To find out, researchers analyzed anonymized credit report data of LendingTree users who live in the 50 biggest metro areas in the U.S.

Looking at debt balances (excluding mortgages) for those born between 1981 and 1996, we determined:

The results revealed a snapshot of millennials’ debt balances, along with the major U.S. cities in which millennials are the most (and least) indebted.

The 10 U.S. cities where millennials carry the most debt

The breakdown of these debts was similar to the average overall, with student debt and auto loans accounting for a larger portion of millennials’ outstanding credit balances in these cities.

Millennials in the South appear to be borrowing more — eight of these 10 cities are in this region, as defined by the U.S. Census Bureau. Texas, in particular, dominates the list of indebted millennials. San Antonio, Austin, Houston and Dallas are among the 10 cities where millennials owe the most.

Here are the cities where millennials are taking on the most non-mortgage debt. 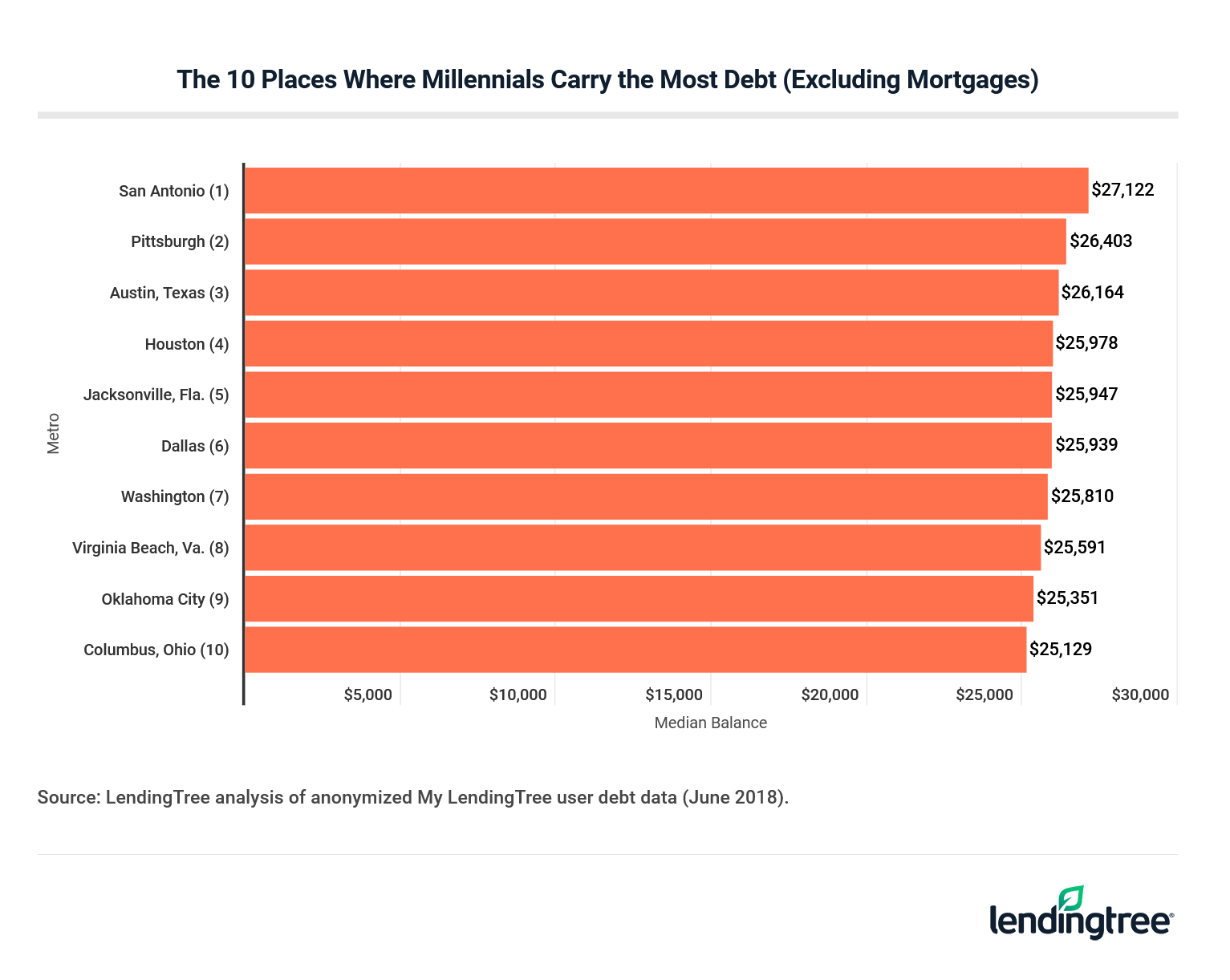 Millennials in this Texas city had the highest levels of debt in the nation, owing $4,058 more than the median debt balance for millennials across all 50 cities surveyed.

San Antonio’s millennials also tend to owe the most on their cars, with that accounting for 43.2% of their total debt balances.

The millennial cohort in Pittsburgh has a higher portion of student debt, at 45.7%, meaning educational loans account for almost half of what they owe.

Next is the capital of Texas. Here, young adults have some of the highest amounts of credit card debt, accounting for 18.1% of their total outstanding debts.

Millennials in Houston, like others in Texas, tend to owe the most on their car loans. In this city, auto loans make up 42.5% of the total balances of millennials’ outstanding debts.

The largest debts for Jacksonville millennials are their car loans, which are about on par with student debt. These two types of debt account for 38.5% and 37.1% of the totals millennials owe, respectively.

Dallas’ millennials most commonly owe more on auto loans than any other type of debt. These car loans account for 39.9%, on average, of total outstanding debts.

This city’s millennials have some of the highest levels of student debt, which make up 46.9% of the total amounts they owe. Interestingly, Washington also has the largest amount of millennials with six-figure debt — nearly 1 in 10 has debt that totals $100,000 or more.

Both figures agree with our previous study on student debt, which found that Washington’s residents are more likely to have a postsecondary or professional degree. They also have the highest levels of student debt in the nation, with a median student loan balance of $22,803.

Of the 10 cities where millennials owe the most, Virginia Beach is where this cohort has the highest portions of debt for both credit cards (18.9%) and personal loans (11.9%). Millennials in most other cities take on their biggest debts for major purchases such as cars or college. These higher credit card and personal loan balances could be a sign of above-average levels of consumer spending and borrowing among Virginia Beach millennials.

Among Oklahoma City’s millennials, car loans tend to be their biggest debt. These auto loans account for 39.3% of an average total debt for a local millennial.

Among the 10 cities where millennials have the most debt, those living in Columbus have student loans that account for the highest portion of their debt. Nearly half (48.1%) of money owed by millennials in this city takes the form of student debt.

The 10 metro cities where millennials have the least debt 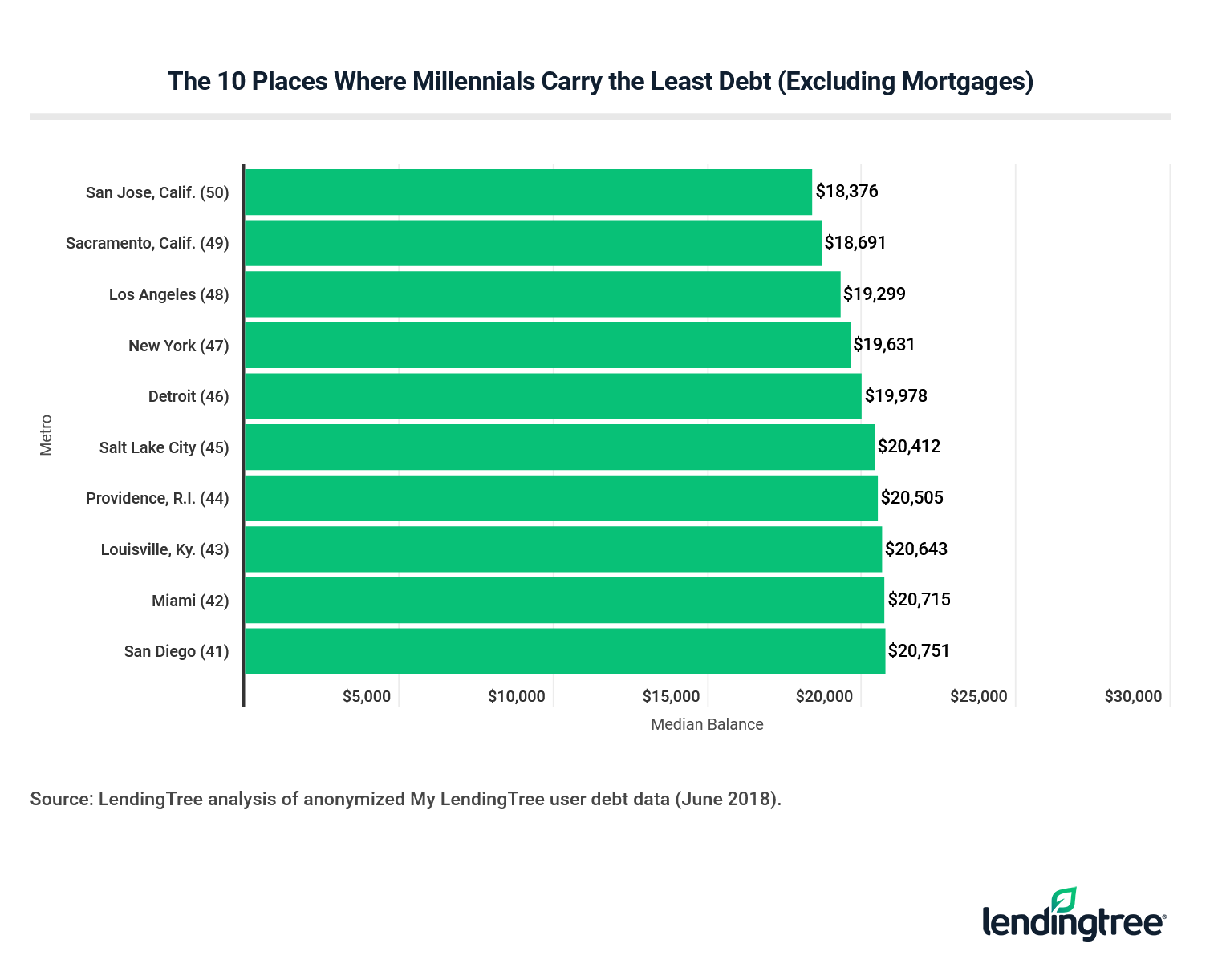 Our study also identified the 10 cities where millennials have the lowest debt burdens. Several of the nation’s biggest and most expensive cities, such as San Jose, Los Angeles and New York City, are where millennials owe the least — but that might not mean what you think.

“It’s worth noting that low debt burdens aren’t necessarily a good thing when thinking about the economic vibrancy of a community,” McFadden pointed out. “Some people have lower debt burdens because they don’t have access to credit, for instance, or haven’t completed college.” In other words, a lack of debt could be a sign that millennials can’t afford or can’t qualify to take out debt, even if they’re in need.

Additionally, unsecured debt such as credit cards and personal loans accounted for a larger portion of debt for millennials in these cities. In San Jose, for example, credit cards accounted for more than a quarter of outstanding debt — the highest amount of any city among the 50 cities surveyed.

How millennials can tackle their debt

Wherever they live, many millennials struggle with debt. Simply making payments on time each month can be a struggle, especially if you have high interest rates or owe a lot relative to your income.

But millennials who find themselves struggling to repay debt have options. Here are some tips borrowers can follow to tackle the three most significant categories of debt covered in this study. 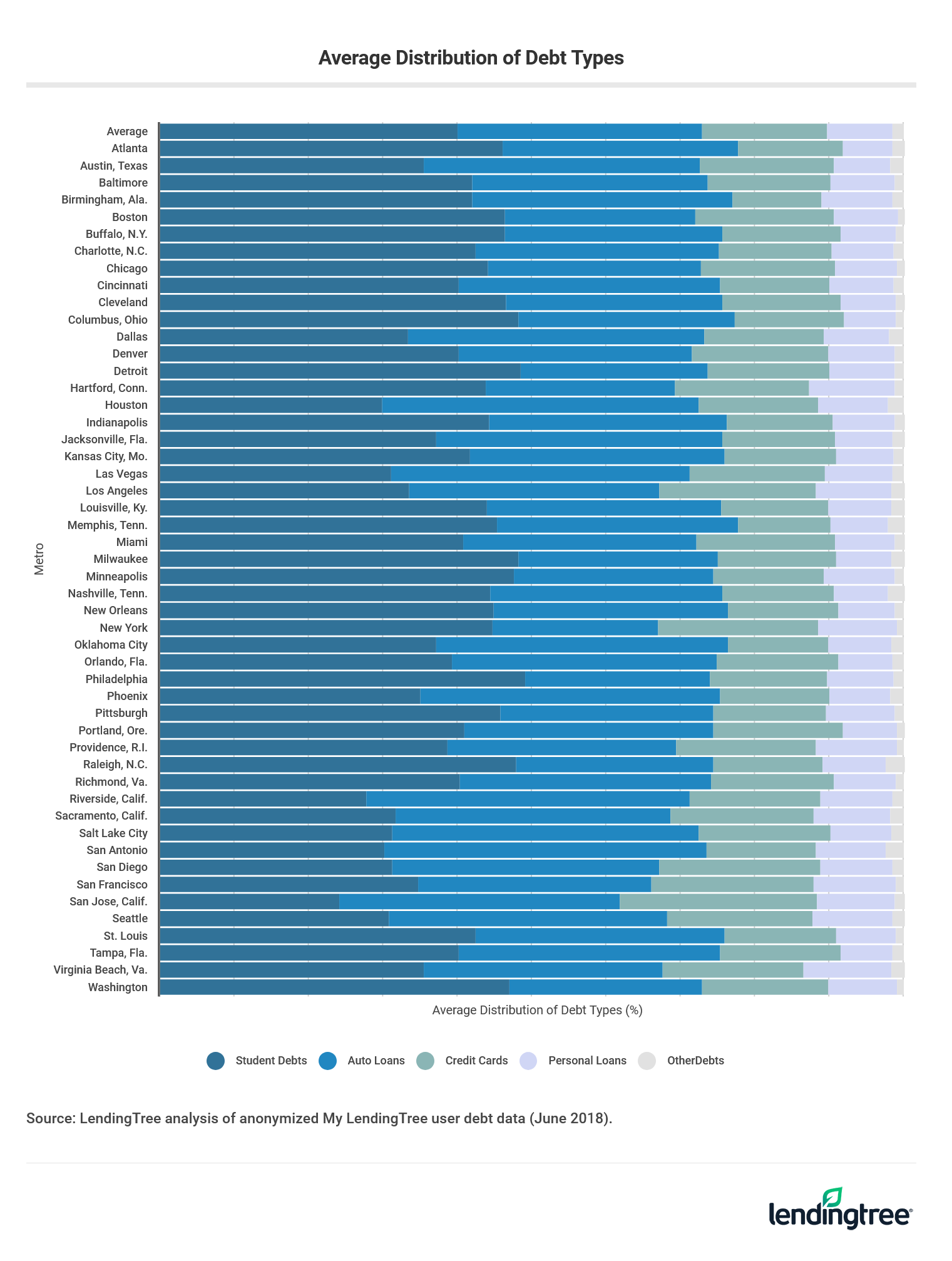