Places With the Most Student Loan Debt in 2019

Go ahead and call student loan debt a national crisis — just don’t forget that it affects some regions more than others.

Seven of the 10 metropolitan areas (cities and their surrounding areas) with the highest median loan balances are in the South, including locales in Georgia, Alabama, Louisiana and the Carolinas.

On the flip side, 9 of the 10 metro areas with the lowest median balances are west of the Mississippi River. With relatively lower debt, college graduates in Western states like California might have an easier time with repayment — especially if they received a degree for their troubles.

To understand exactly where the education debt burden weighs the heaviest, we studied the median balances in America’s 100 largest metros. Here’s what we found.

Places that owe the most in student loans 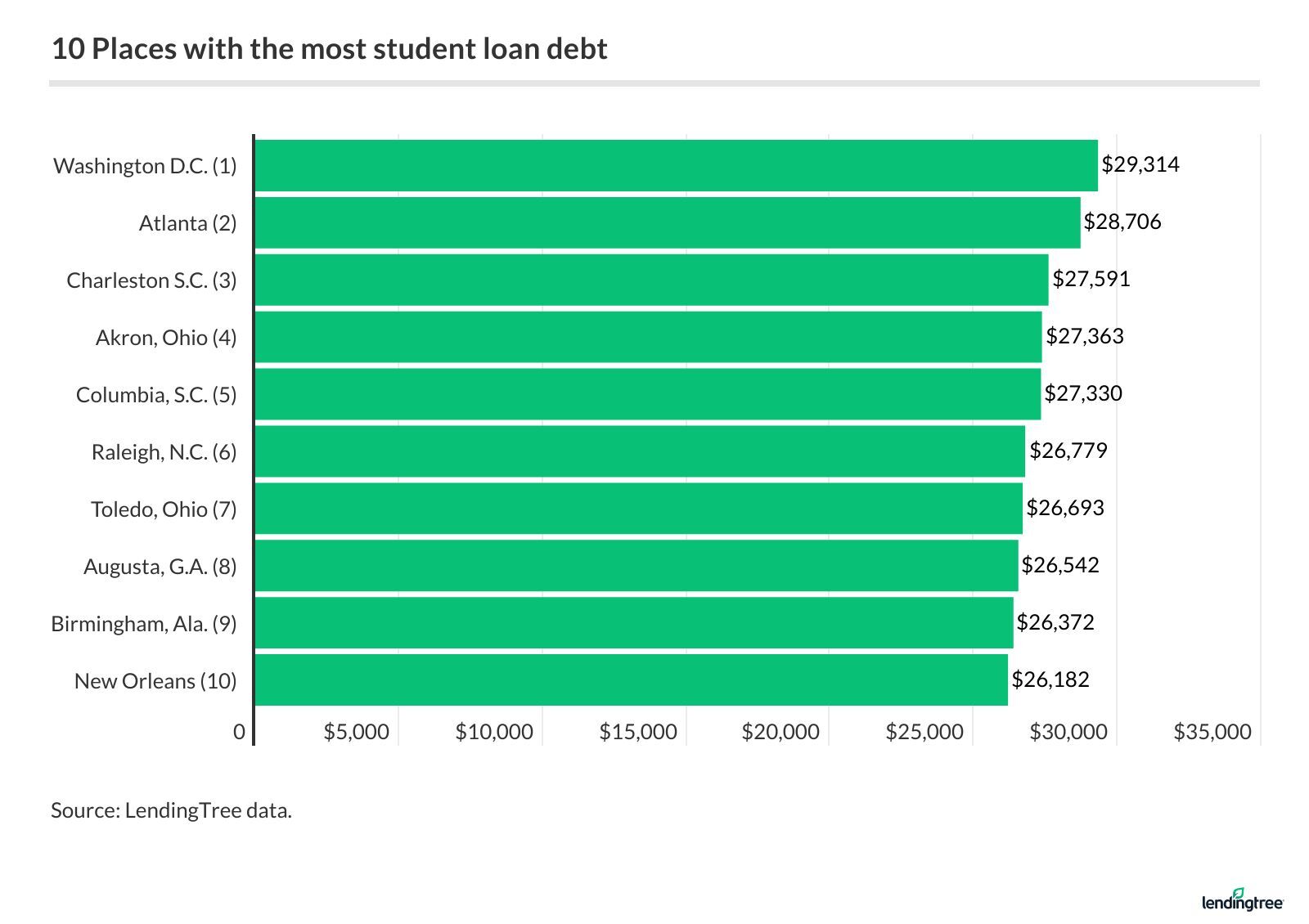 Roughly half of the people over the age of 25 in the Washington, D.C., metro have a postsecondary degree — that’s significantly higher than the 28% of all Americans who’ve earned a bachelor’s or higher.

Even more significant: Nearly 1 out of 4 have professional or graduate degrees, more than double the national rate of 10.5%. This helps explain why Washington also has the highest percentage of student debt holders who owe more than $100,000.

But that doesn’t necessarily mean these borrowers are in financial crisis, as most completed their degrees and are earning accordingly. While 22% of Americans left college before finishing, the same is true for only 16.5% of those residing in and around the nation’s capital.

Atlanta is another highly educated city — 37% of Atlanta residents ages 25 and older have completed at least a four-year education, and nearly 14% have a graduate or professional degree, which is higher than the nation as a whole (10.5%).

However, that doesn’t completely explain why about 13% owe more than $100,000, well above the 8.7% average of the metros we reviewed. The area is home to a plethora of higher learning institutions, including the Georgia Institute of Technology, Georgia State University, Emory University, Morehouse College and Spelman College. Perhaps the need for so many professors helps to explain why Atlanta is more educated — and in more student debt — than the nation as a whole.

Unfortunately, 1 in 5 Atlanta residents left college before finishing a degree, which is in line with the rest of the country.

The first of two South Carolina metros among our top five overall, Charleston placed third by a narrow margin. Still, the average borrower here has 4.6 loans, more than any of the 99 other metros we studied.

More students going to college also equals more student loans overall: About 34% of the metro area’s population has at least a bachelor’s degree, trumping the national average of 28%.

The first metro on our list north of the Mason-Dixon Line, Akron’s education rates mirror the nation’s — 31% of residents over the age of 25 have at least a bachelor’s, 11% have a graduate or professional degree, and just under 20% left school before completing a degree.

We found that 7.9% of residents Akron — a manufacturing hotspot and home to the University of Akron, among other schools — owe more than $100,000.

High balances brought Columbia into the top five of metros with the most education debt. About 45% of borrowers in the metro area had at least $50,000 in student debt — and more than 13% of were staring at a six-figure hole.

Interestingly, while the fellow Palmetto State cities of Columbia and Charleston ranked high on the list, Greenville, S.C., did much better, coming in at 39th overall for median education debt.

Places where student loan borrowers have the lowest balances 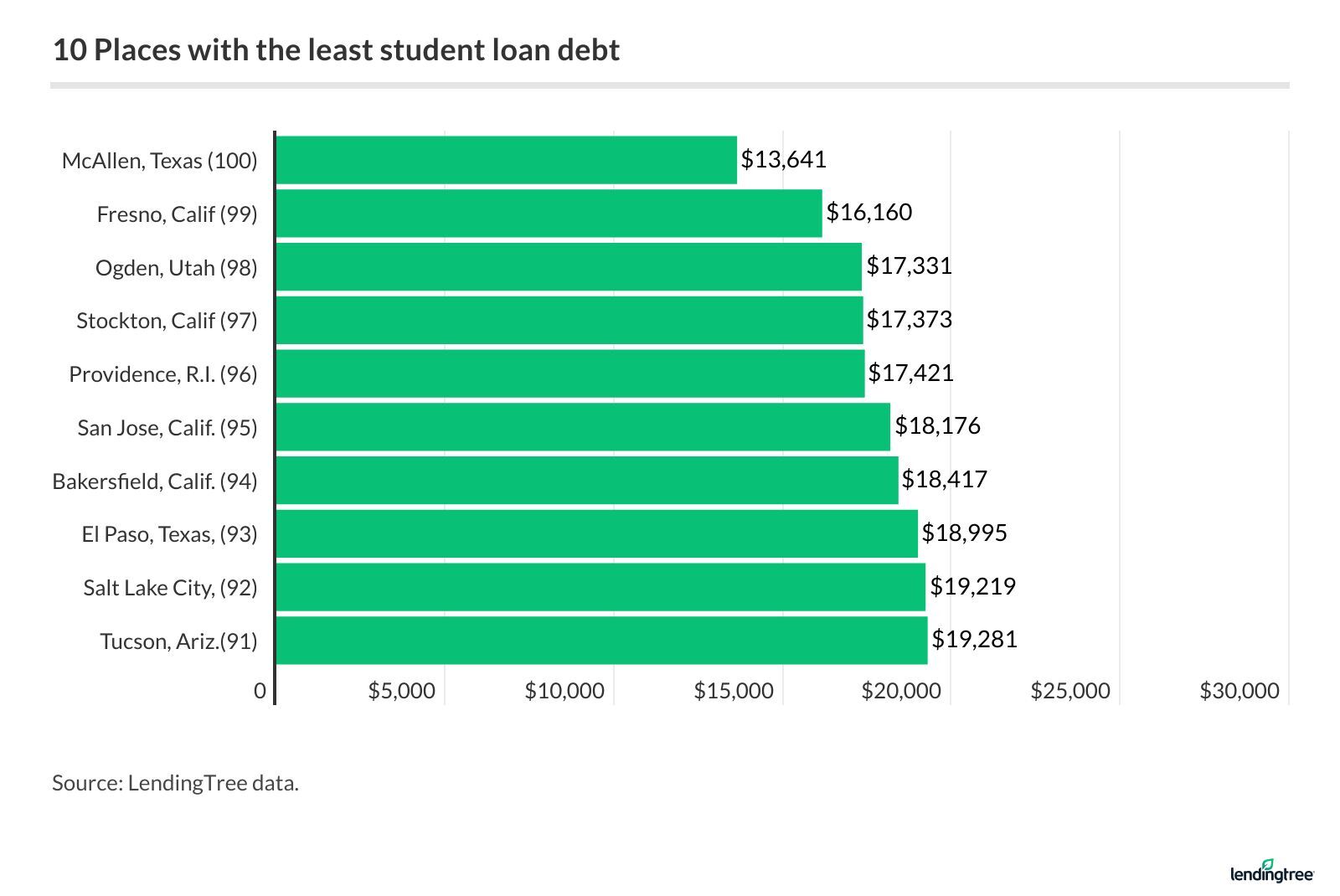 There’s a pretty good reason why residents of McAllen don’t carry much student debt: Fewer of them pursue college study. Only about 13% of those 25 and older have a bachelor’s, and just 5% have a graduate degree.

Likewise, the number of people who have some college experience (18%) is about 4 percentage points less than the nation as a whole.

This all translates into a lighter debt loan for area residents. Only 5% of borrowers in McAllen owe more than $100,000, the lowest percentage among the metros we reviewed.

Only 13% of people age 25 and over in Fresno have a bachelor’s degree, while 7% have graduate and professional degrees.

Unfortunately, 23% have taken some college courses without attaining a degree, slightly above the 22% national figure. This means that despite the low balances — only 7.2% owe more than $100,000 — more Freso residents are in a tough position when it comes to repaying student loans.

Utah ranks last among the states for average loan debt, at $18,838 per student, according to the Institute for College Access & Success, so it shouldn’t come as a surprise that Ogden and nearby Provo (86th) show up on the low-debt end of our list.

Ogden-based borrowers, however, might not be as equipped to repay their relatively smaller balances. About 28% of residents attend college but don’t earn a degree, some six percentage points above the national average.

At the home of the Ivy League’s Brown University, 19% of people over the age of 25 have a bachelor’s, and 12% have graduate degrees. This is a bit higher than the nation as a whole, but generally in line.

We found that 18% have some college experience but no degree, which is about 4 points lower than the country as a whole.

How the top 100 metro areas compare on student loan balances

Have you found where your metro area landed on our top 100 list?

If you live in a part of the country especially burdened by student loan debt, let’s hope you’re the exception to the rule. Alternatively, if you live in a place that’s less affected by the crisis, hopefully you’re not an outlier.

As explained in our study identifying where students have the most debt, your outstanding balance can be indirectly tied to your location. Perhaps you borrowed to attend a better private school or needed an expensive graduate degree to gain footing in your region’s job market.

Whatever the case might be, having a degree helps you find the income to foot the bill for repayment.

Beyond banking on a salary, you could consider the benefits of a move. Relocating to a metro area that ranks higher on our list might offer some combination of a lower cost of living, fewer tax burdens and greater access to state-run repayment assistance programs.

Still, your location is less important when it comes to loan-management strategies. It doesn’t matter where you live if you’re thinking of enrolling in income-driven repayment, for example, or reducing your interest rate via student loan refinancing.

What does matter is that you take the steps necessary to end your debt, regardless of where you reside.

Analysts determined the median loan balances within each metro area — plus the percentage of borrowers who owe more than $50,000 and more than $100,000 in loans — by reviewing 485,000 anonymized credit reports of My LendingTree users. Credit reports without student loan debt listed were excluded from our review.

My LendingTree is a free credit monitoring service available to the general public, regardless of their debt and credit histories, or whether they’ve pursued loans on a LendingTree platform, including LendingTree. My LendingTree has over nine million users.

Student Loan Default: What You Need to Know

Here’s our review of Funding University — or Funding U — which aims to offer student loans to borrowers “shut out by the bank requirements.”

READ MORE
Buying a House With Student Loan Debt: Here’s How to Do It

If you owe a lot in student loans, it can be difficult to take on a mortgage. But buying a house when you have student loans is possible if you’re careful.