Survey: About 40% of Student Loan Borrowers Pay Down Debt With Tax Refunds

The end of tax season is just weeks away. More than sixty-nine million taxpayers have already filed their returns for 2016 and more will do so by the April 18 deadline.

Most of these filers will also be getting a tax refund. So how do they plan to spend it?

One smart use of a tax refund is making an extra payment toward student loan debt. We recently conducted a survey to find out how many student loan borrowers plan to use their refunds to get their balance to $0 faster.

Among more than a thousand student loan borrowers surveyed who expect a tax refund for 2016, two out of five (39 percent) say they will use it to repay their student loans.

This includes 14 percent who say they plan to put their entire tax refund toward repaying student loans. An additional 25 percent plan to use at least some of their tax refund on student loan debt. 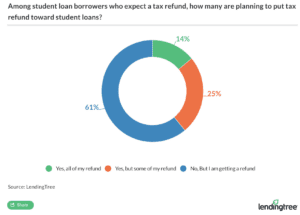 About eight out of 10 tax returns result in a refund. Additionally, the average tax refund for the 2016 fiscal year is $2,973 so far, according to the IRS. That’s a pretty decent windfall that can be put to good use by making an extra, lump sum payment toward student loans.

For example, if you apply that amount to a typical 2016 graduate’s $37,172 educational debt, it would shave a whole year off of their repayment period. And they would lower the amount of interest they pay over the life of a standard 10-year loan by $1,504.

Some tax filers might also miss out on the opportunity to save on their taxes thanks to the student loan tax deduction. Around three-quarters (77 percent) of student loan borrowers surveyed said they know they can deduct their student loan interest.

Borrowers who are unaware of these potential savings and fail to claim their student loan interest on their tax returns could be missing out on up to $625 in tax savings.

The survey also asked student loan borrowers how they file their taxes. Filing using an online tax software or an app was the most popular method used by 45 percent of respondents. 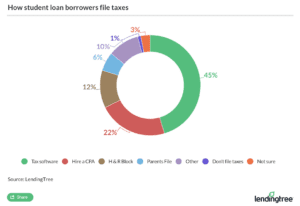 An almost equal amount of filers, 41 percent, say they have someone else do their taxes for them. This includes six percent whose parents file for them.

But it also includes a third of filers who pay someone to prepare and file their tax returns. In fact, the second-most popular filing method overall is to hire a CPA or an accountant, which 22 percent do. Another 12 percent rely on H&R Block to file their returns.

Filers are (mostly) honest on their tax returns

The survey revealed that 94 percent of filers do not think it’s okay to lie when filing taxes. The other six percent say it could be okay.

Respondents were also asked if they thought certain kinds of lies would be acceptable on a tax return. They could choose as many of the following as they think are acceptable: 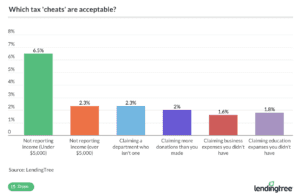 Respondents could also select “none of the above,” which respondents overwhelmingly did (89 percent).

However, leaving off income below $5,000 was the tax “cheat” respondents found most acceptable, with seven percent indicating they thought it was okay.

Student loan borrowers are smart and careful with their taxes

Overall, the survey results reveal that student loan borrowers are responsible tax filers. They are very unlikely to try to lie or cheat on their taxes. And if they get a refund, chances are they will put some of that cash toward student loan debt.

Survey Methodology: This survey was conducted as a Google Consumer Survey, run from March 11-14, 2017. It collected answers from 1,018 respondents who have student loans. The largest margin of error present in any survey response was 3.1 percent.

How to Find Grants to Pay Off Student Loans

Did you know there are programs that offer grants to pay off student loans? Learn about the different grant options that can help you pay back student debt.

Check out our latest picks for the best private student loans, as well as where to find other lenders that might suit you best.

READ MORE
How to Pay Off $300K in Student Loans

If you owe $300K in student loans — or more — you might feel like you’re doomed to a lifetime of debt. But really, you’re not.