When student loan balances seemingly grow each month — not shrink as they’re supposed to — it’s easy for borrowers to think the finish line keeps moving further away. That thought is even more common than you might imagine.

A new LendingTree survey found that 53% of borrowers believe they’ll be making student loan payments for the rest of their lives. That number jumps to 74% among borrowers with at least six figures to repay. (And note that these responses were from early February, when concern over the coronavirus in the U.S. was relatively mild.)

“It’s hard to juggle all of my expenses and actually make progress on paying off the actual loans, rather than just the interest,” one the respondents said.

Still, not everyone is pessimistic about the future of their repayment, with confidence varying by generation and gender, as well as whether the borrower in question has a strategy to deal with their debt. Here’s what we found …

More than 7 out of 10 borrowers with at least $100,000 in outstanding education loans said they thought their debt would outlive them. This is despite the fact that large student loan balances are common among relatively high-income earners — such as doctors, lawyers and other professionals — who are prime candidates to lower their rates via student loan refinancing.

Of course, even more modest debt totals can be daunting, especially for those earning lower wages. And income was just of four key obstacles that the survey respondents said were the biggest factor blocking a more successful repayment:

The pessimism over student debt repayment isn’t new. Our 2019 report on debt hindering personal milestones found that less than half (44%) of respondents were fully confident they could afford their ensuing monthly payment. 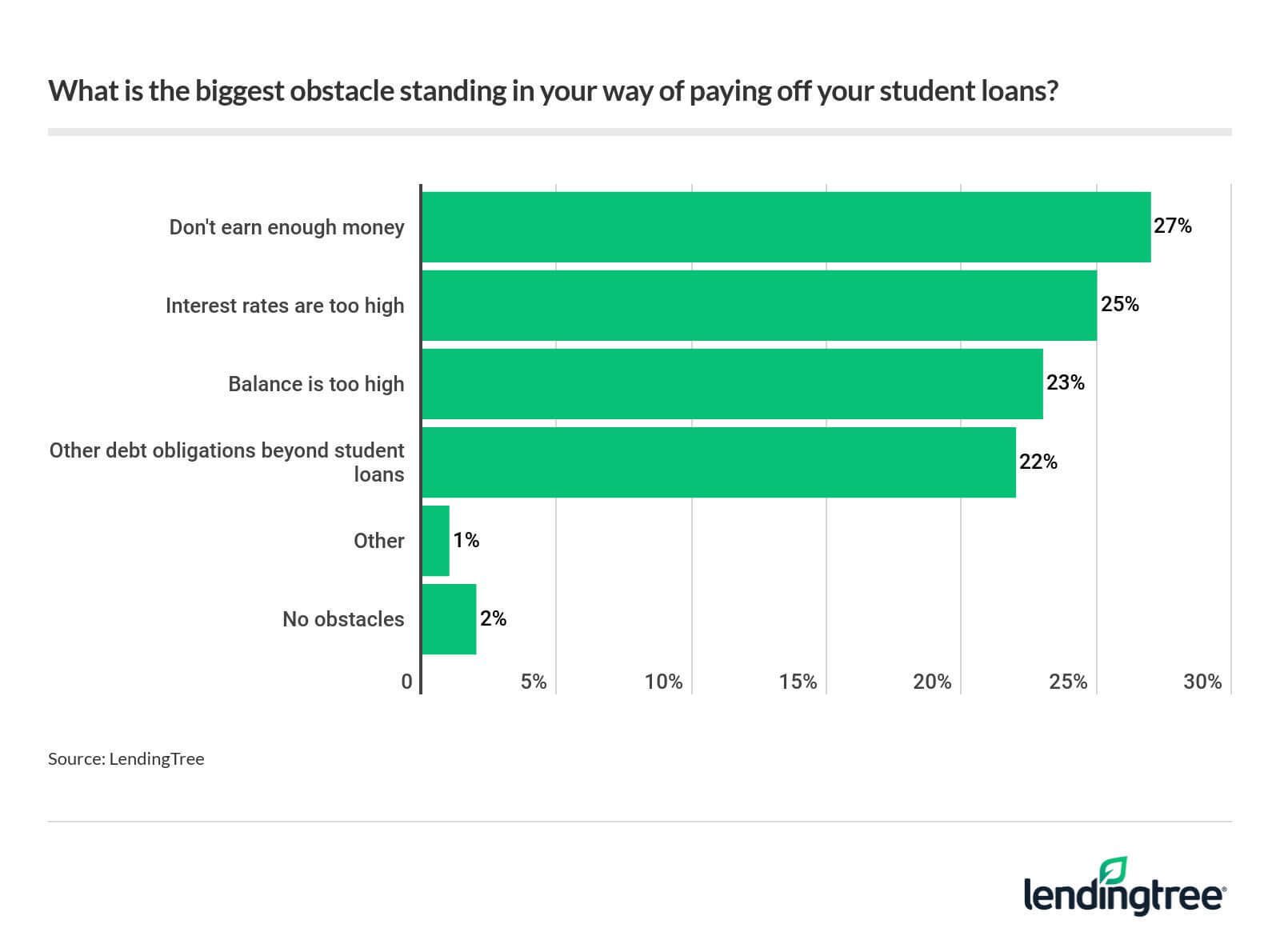 That’s to be expected, as research shows that a majority of parent PLUS loan borrowers — that is, Moms and Dads who borrow federal loans on their children’s behalf — struggle in repayment, putting their retirement in peril.

Besides older borrowers, female respondents were also more likely to show pessimism about repaying their loans. Nearly 6 in 10 (57%) said their education debt would prove to be never-ending, compared with about 5 in 10 (47%) of male borrowers.

These results echo past research by LendingTree indicating that women are more likely than men to see their student debt as unmanageable.

The obstacle in front of many borrowers — especially women — was income. Female respondents were more likely to say they don’t make enough money (30%) for their repayment, compared to 23% of males.

The difference between men and women in confidence surrounding salaries is very likely tied to the gender pay gap. According to our 2019 personal milestones survey mentioned above, only 44% of women said their annual salary was more than their student loan balance, compared to 59% of men. 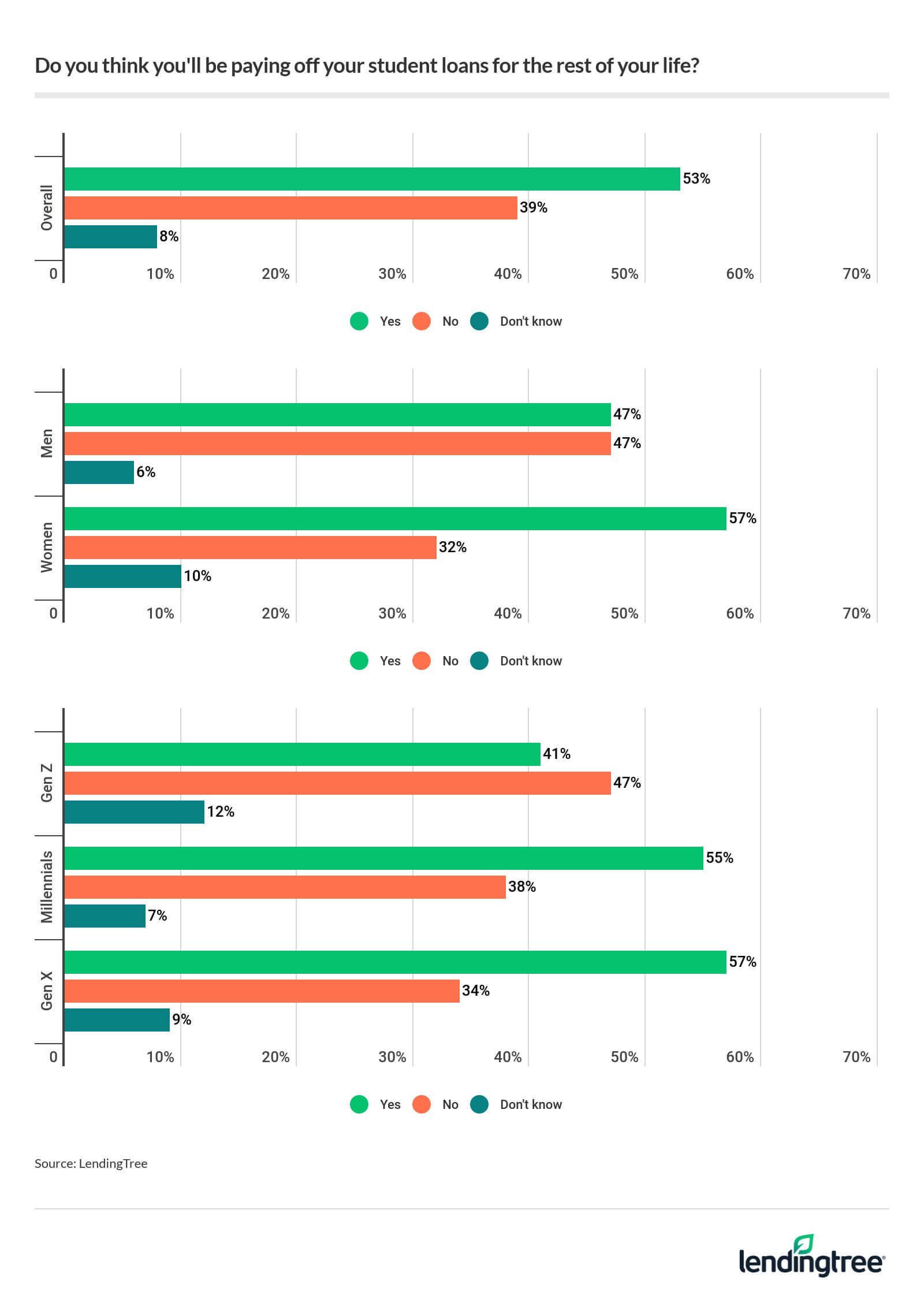 But while the glass is half empty, so too is it half full. About 47% of those surveyed said they planned to be free of their student debt within the next five years. To do so, 86% of these more confident borrowers said they were relying on at least one repayment strategy. Specifically …

Of course, feeling confident about repayment is also about control. And with measures like these, borrowers have more control over their fate. In fact, each of these tactics are also featured in our student loan payoff success stories. 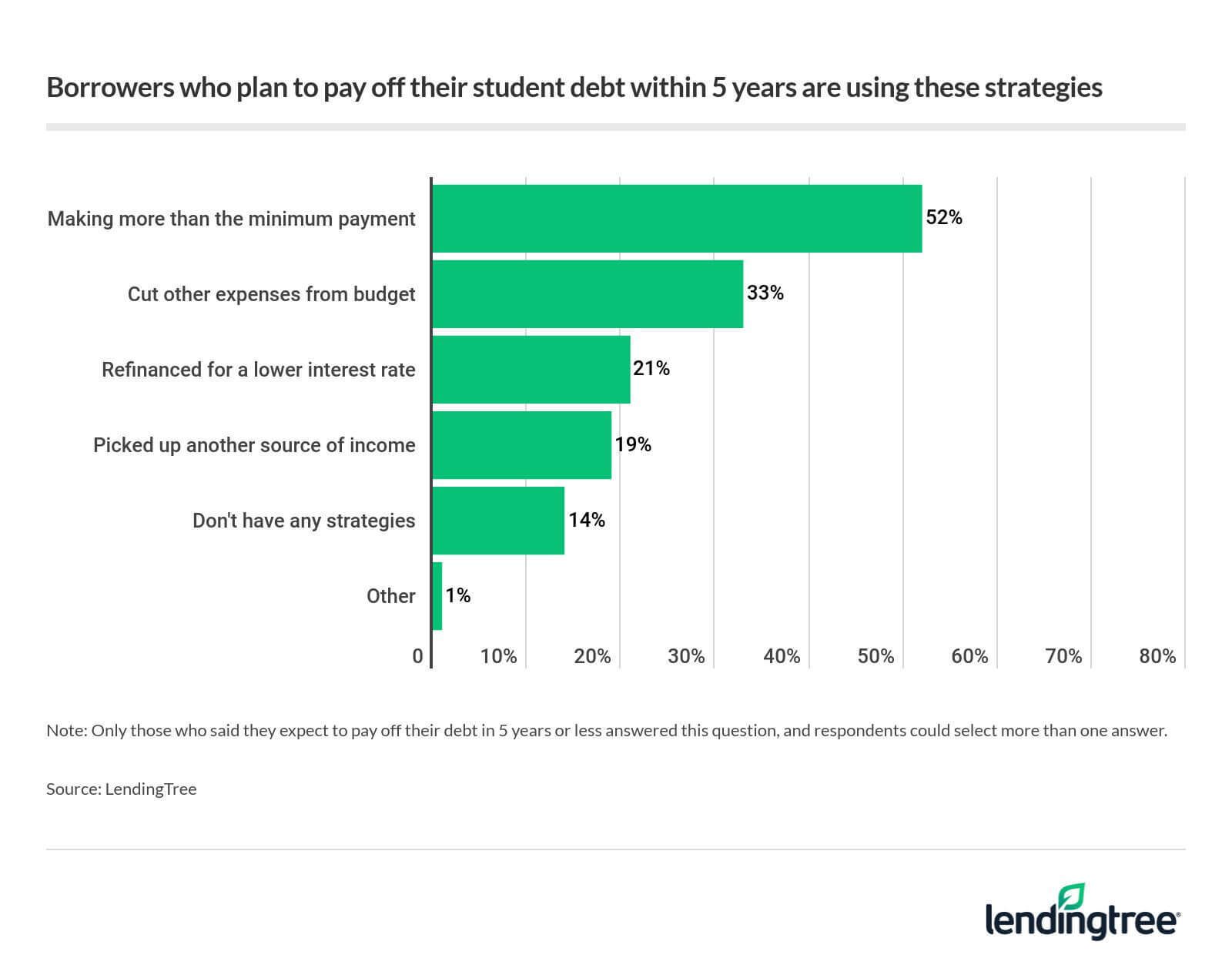 Confidence is key to a successful student loan repayment

You don’t have to major in behavioral economics to know that your attitude can affect your outcome. That’s why it’s so important for student loan borrowers to feel empowered about their repayment.

Unfortunately, as our survey results indicate, more than half of all borrowers don’t feel they’re in the driver’s seat — a finding that squares with our 2020 survey on student loan-induced depression.

To combat these unhelpful feelings, consider the strategies that the more confident borrowers surveyed are using. You can try sneaking in an extra payment or two. Or if you can’t afford that, take a hard look at your budget. Alternatively, if you don’t yet qualify for student loan refinancing, try improving your debt-to-income ratio with a moneymaking side hustle.

LendingTree conducted an online survey of 1,007 Americans who have student loan debt, with the sample base proportioned to represent the overall population. The survey was fielded online using Qualtrics from Feb. 5-10, 2020.

Applying early decision could hurt you or help you, depending on your situation. Here’s how to decide if it’s a good move.

READ MORE
What Is Your Student Loan Balance? Here’s How You Find Out

Knowing your student loan balance is very important. Use these tools to find the answer when you ask “How much do I owe in student loans?”

Tuition increases only worsened at the state level, with in-state tuition at public four-year universities rising by 99% in Louisiana.