While a higher salary can appeal to well-qualified applicants, employee perks often intrigue job seekers to accept one position over another. In order to build a team of experts and minimize turnover, it’s important for employers to offer a competitive benefits package and develop a strategic and attractive workplace culture.

We asked Americans what they care about when it comes to benefit packages this year and our findings were unexpected.

Although company benefits are not a top priority for everyone, 33 percent of survey participants said they have turned down a job due to the lack of benefits. Furthermore, we found that men value company benefits more than women. 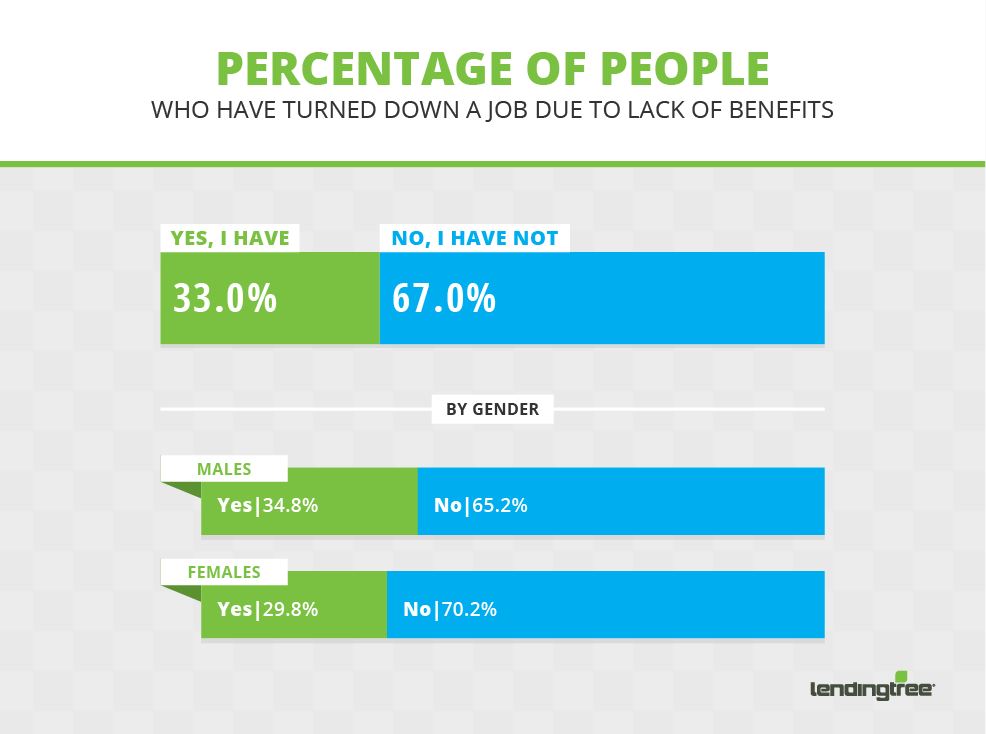 This statistic alone brings up a much bigger question: what benefits do people want? That’s why we asked Americans how paid time off (PTO), health insurance, 401K contributions, maternity leave along with a selection of secondary benefits weigh on their decision to accept a job offer.

Health insurance has been a hot topic of conversation for decades. More recently, it has gained even more attention as a major issue during the presidential election. Amidst all of the national and international coverage, it’s interesting to see how much people prioritize their health insurance options. The Affordable Care Act mandates employers with over 50 employees provide health insurance, but the company is not obligated to offer a specific plan.

We asked Americans which primary benefit they wish could be improved and over 32 percent would like to see improvements in their health insurance coverage. Not far behind was 401(k) matching at 31 percent. 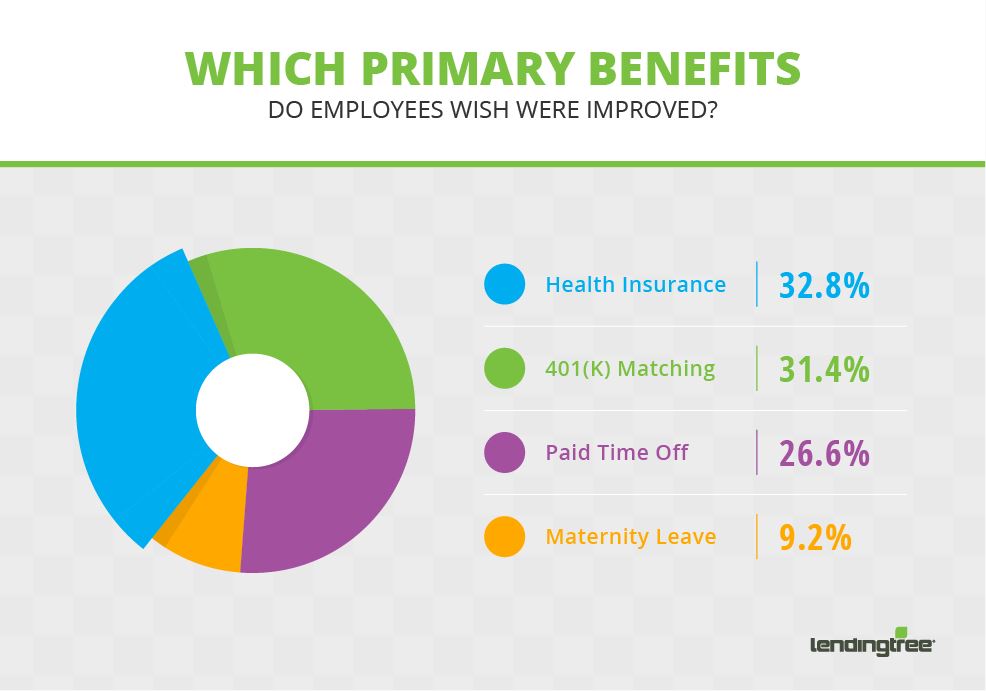 We found that gender played a role in the results with men prioritizing 401(k) matching, while women mainly prioritized health insurance coverage. Unsurprisingly, more women prioritized maternity leave over men, but it was still ranked lowest on the rankings of importance. 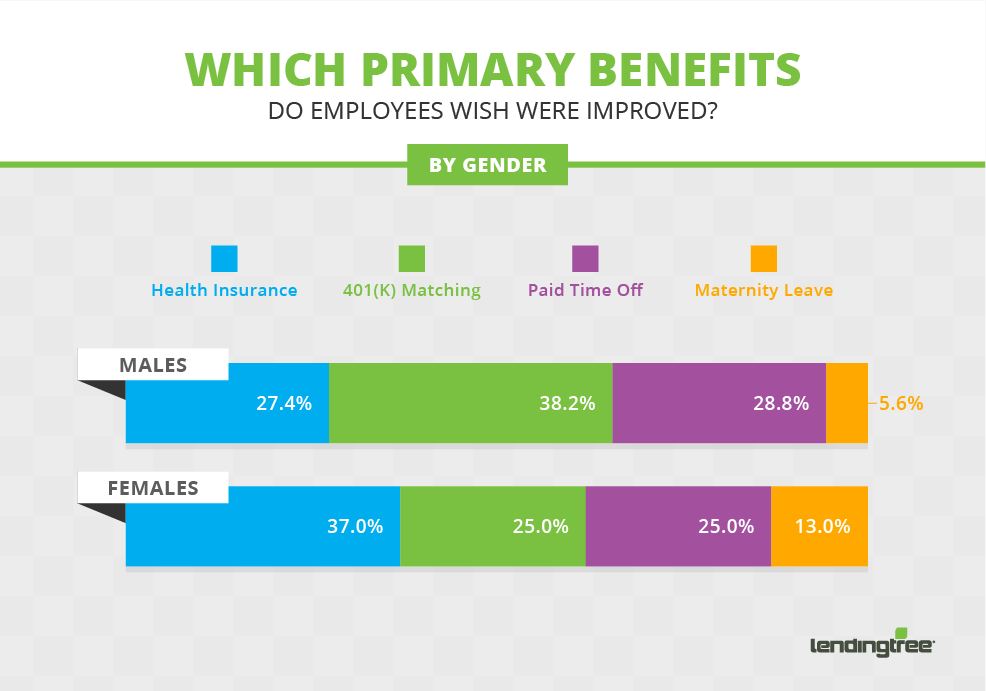 With health insurance offerings coming out as a top priority for Americans, we asked how much of their salary they would forgo for better coverage and found that only 40 percent of people would be willing to give up a portion of their income to see that improvement. Surprisingly, as the age bracket increases, the amount of people who wouldn’t be willing to pay more for health insurance on a monthly basis increases as well. 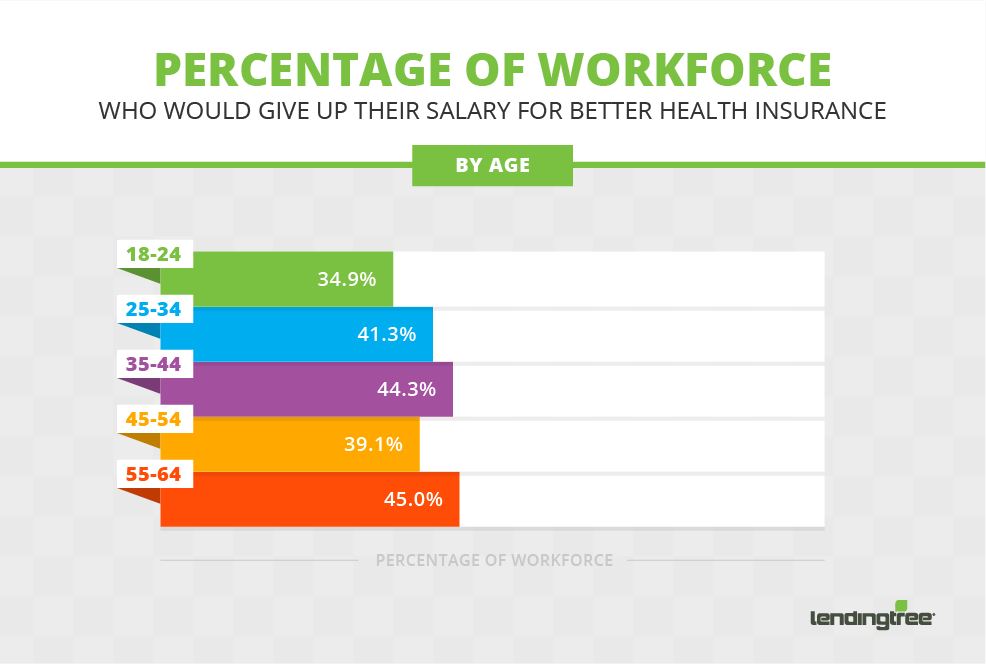 Evidently, many Americans may be satisfied with their health insurance plans through work, but if they were to see improvements in one of their primary benefit options, they would prioritize healthcare.

A 401(k) is a retirement savings plan that allows employees to invest a portion of their paycheck before taxes are taken out. As a part of many benefit packages, employers will match a percentage of the employee’s contributions. We asked Americans how much of their salary they would be willing to give up for a 2% increase in their 401(k) match and found that more than 36 percent of people would give up a portion of their salary for that benefit. 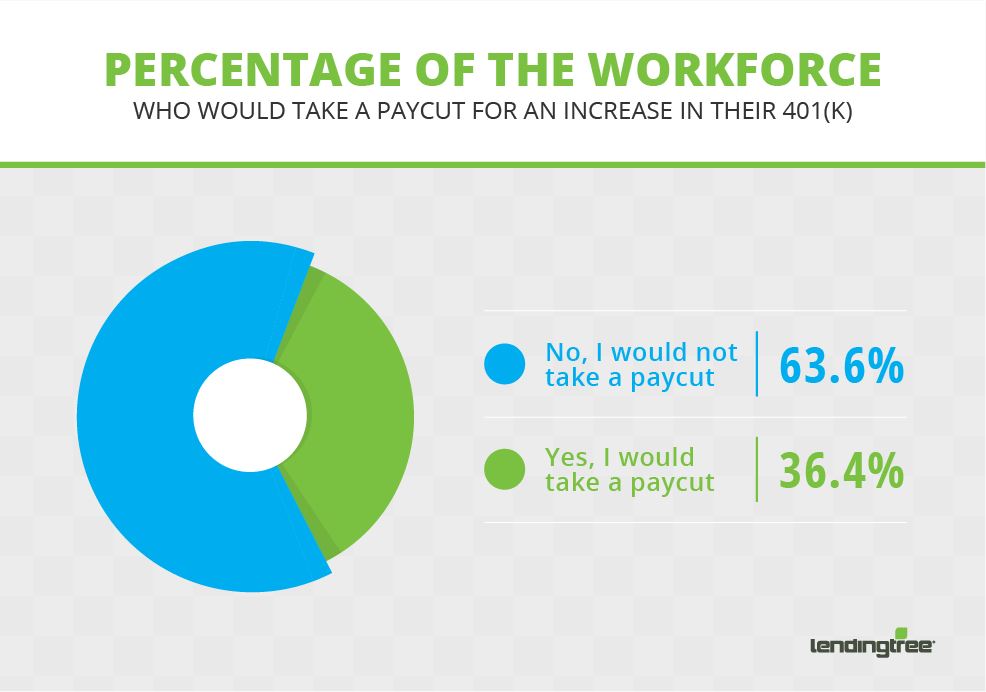 While salary is generally up for negotiation before a job offer is accepted, PTO typically slides under the radar. Although PTO is traditionally set in stone by the employer at an average of 8 days per year in the U.S., our research suggests that companies should rethink the amount of vacation days they offer.

We found that 31.6 percent of Americans would give up a portion of their salary for more PTO days. That said, the cost associated with offering additional PTO days shouldn’t be seen as an enormous burden on employers. This study sheds light on why more vacation time can actually increase productivity, performance and job satisfaction.

Our findings show that nearly 36 percent of people between the ages of 18 and 34 would agree to cut $1,000 from their salary if it meant they could enjoy five extra PTO days. While the millennial generation prioritizes vacation time the most, Generation X isn’t far behind with 30.5 percent willing to give up $1,000 of their salary for more time off. 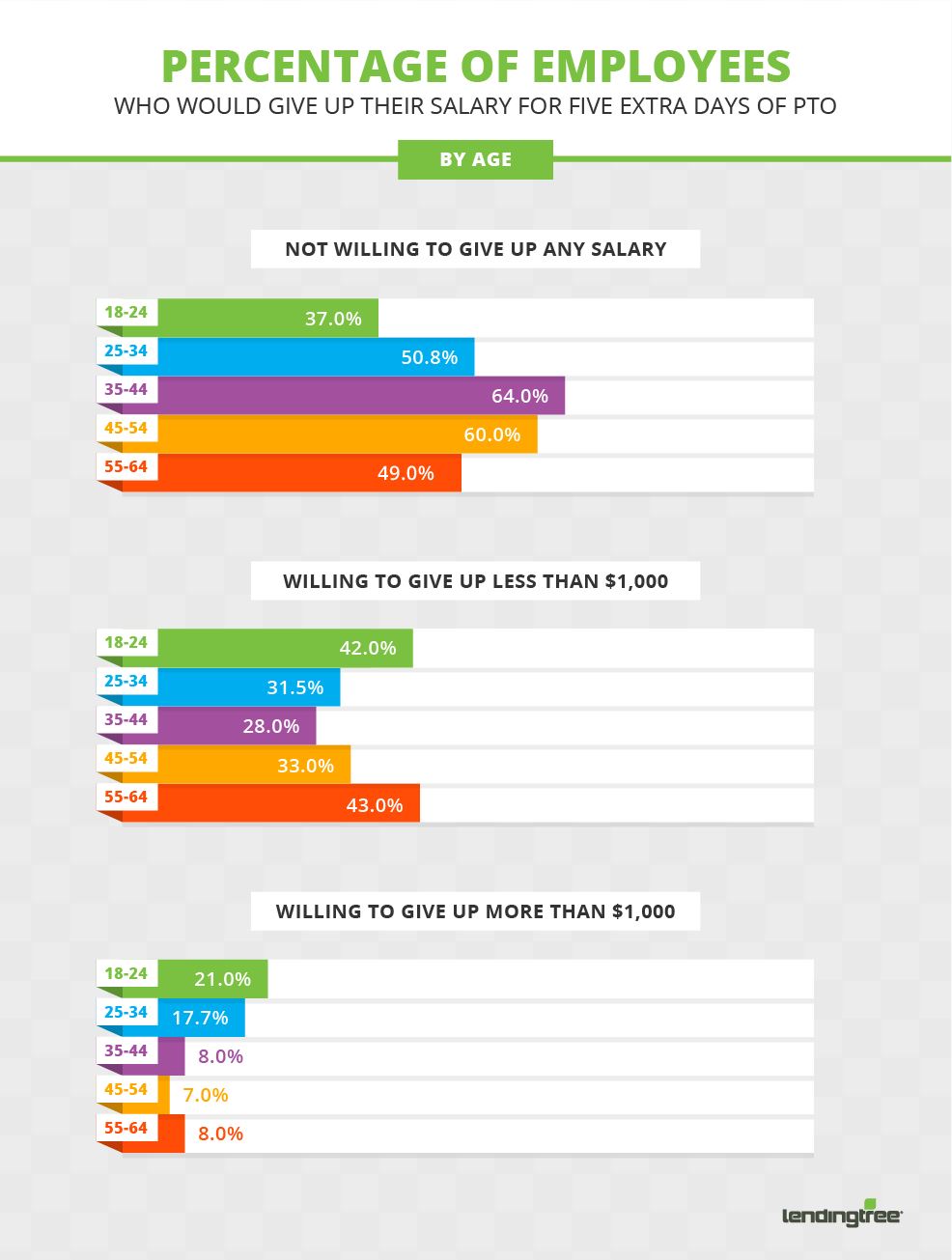 It’s worth noting that countries around the world such as Brazil, France and Malta, have set the bar by offering nearly triple the amount of vacation days that the U.S. does—some even putting federal laws into effect that require citizens to use their vacation days every year.

Whether the younger generation has higher expectations when it comes to benefit offerings or U.S.-based employers are finally opening their eyes to international standards, there is one clear verdict: benefit packages are becoming more and more competitive.

More and more, companies are introducing unique benefits to attract and retain their employees. Considering some of the trendiest benefits offered in 2017 are free lunch, free gym memberships, free technology (Kindle, Fitbit, etc), free happy hours and flexible work hours, we asked Americans which secondary benefits they would like to see introduced in their workplace. Overwhelmingly, flexible work hours took top priority. 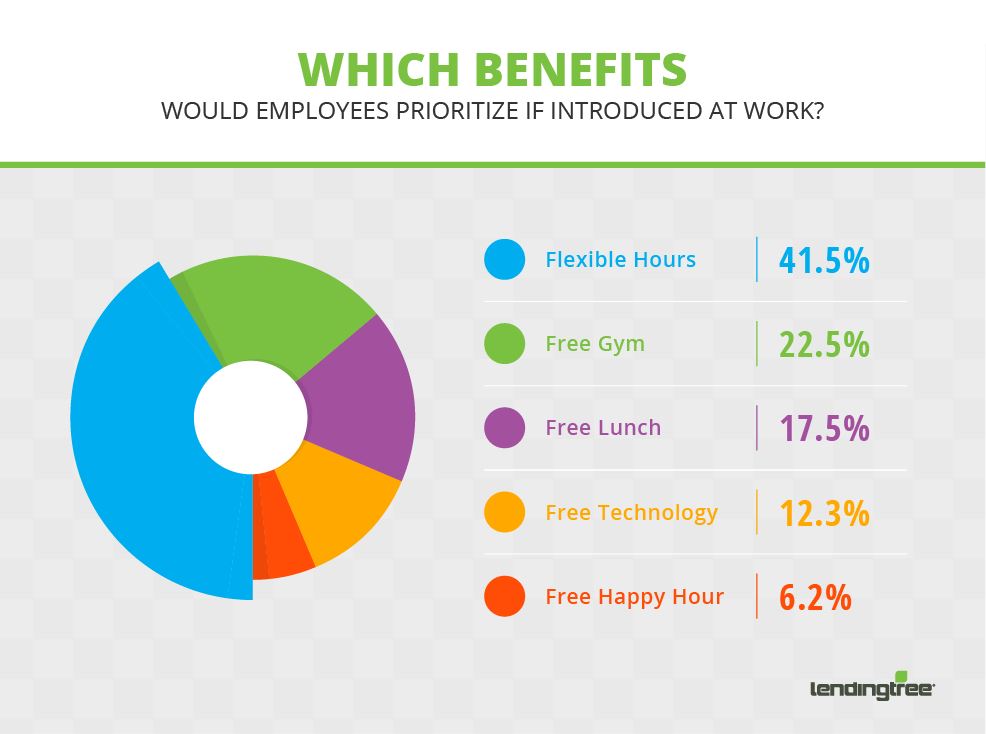 Flexible work hours are unquestionably one of the least expensive benefits for companies to introduce as long as they have the proper equipment available and the employee’s job description allows for it. With work-life balance being a major topic of conversation among Americans, it’s important for companies to accommodate the wants and needs of their prospective and current employees.

Companies should also be aware that age plays a role when it comes to secondary benefits. While the Millennial Generation prioritizes free gym memberships and free lunch, we found that a majority of Generation X rather flexible work hours. 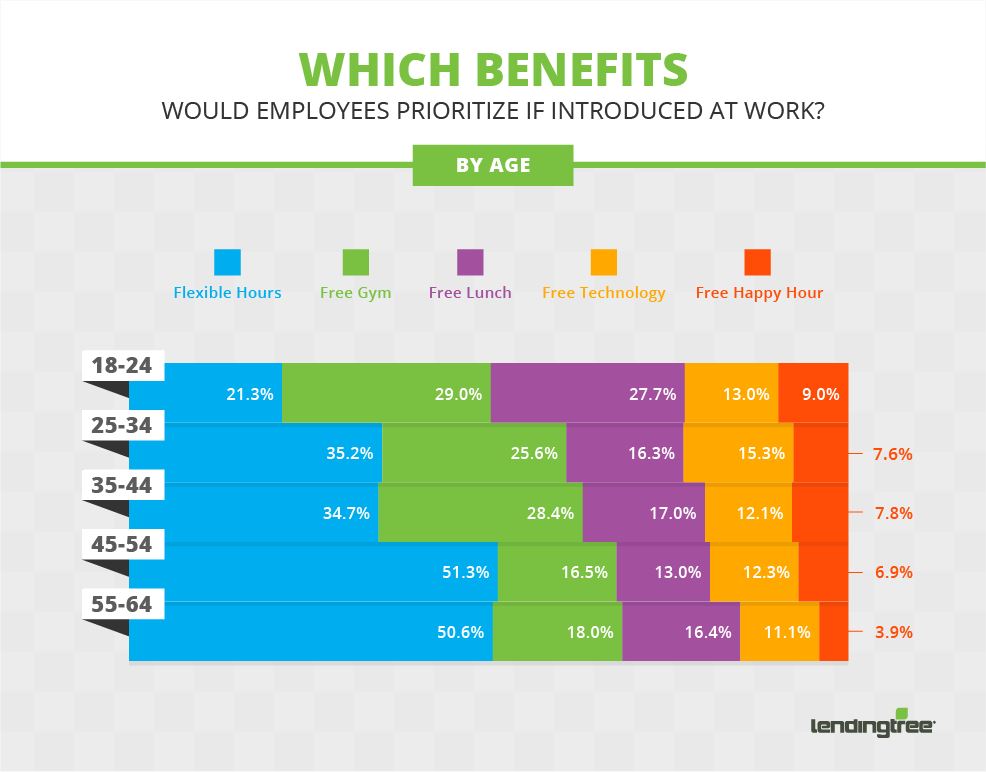 Overall, our research shows that health insurance and 401(k) matching weighs heavily on a prospective employee’s decision to accept a job. If companies are willing to consider introducing a secondary benefit, flexible work hours should take top priority.