It’s official: Americans love to stream. With more than 8 in 10 Americans saying they spend money on at least one streaming service — and 4 in 10 admitting that they mooch off someone else’s paid account — binge-watching is a national pastime.

That was among the key findings in a LendingTree survey of over 1,500 Americans on their streaming habits. The survey also revealed that parents are the group most likely to subscribe, Netflix is the most popular service and more than a third of streamers are earning credit card rewards on their subscription spend.

Sharing or swapping streaming logins happens all the time, said Matt Schulz, chief credit analyst for LendingTree. “If you’re keeping it within the family, such as a kid using mom and dad’s account when they go off to college, that totally makes sense,” he said. 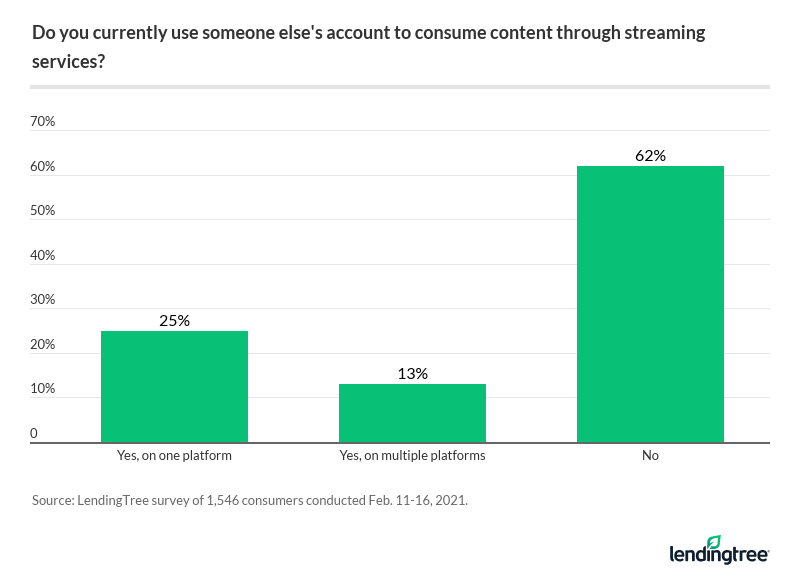 The most popular account to “borrow” is Netflix, cited by 52% of respondents, followed by Hulu (31%) and Disney+ (28%). On average, those who use someone else’s streaming account do so on three different platforms. 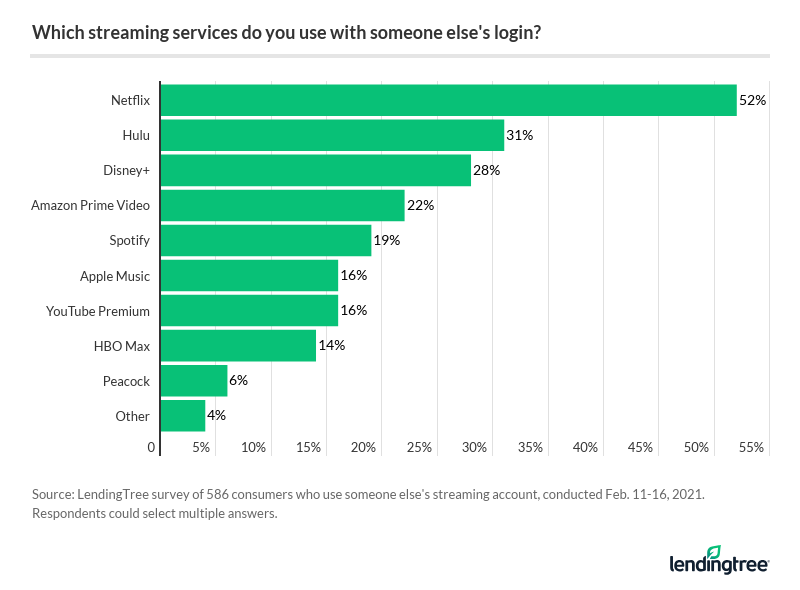 Among those borrowing someone else’s login, 6 out of 10 said the account belongs to a family member, while about a quarter borrow from a friend, 20% from a significant other and 5% from an ex.

Three-quarters of the non-paying users said they have a deal in place with the account holder: 45% said they swap account logins, 20% split the subscription cost and 10% worked out some other kind of agreement.

“It can make sense if you’d like to test-drive a new streaming service to see if you’d like it,” said Schulz. “Borrow your friend’s password, watch a couple of episodes of Wandavision or Bridgerton, see what you think and then, if you’re into them, get your own account.”

Then again, nearly a third (32%) of respondents admit they are secretly logging in without the permission of the account holder.

Not everyone thinks it’s fair to share (or steal) logins, though — especially baby boomers, as 66% said so. This is in direct contrast to the 48% of Gen Z who said it’s no big deal since these companies already make plenty of money.

For the most part, Schulz noted, it is unfair to the streaming company to use someone else’s account, since they rely on that revenue to create all of that buzzworthy content.

“However, the reality is that Netflix, Spotify and others know that you do it,” he said. “They assume a certain amount of mooching when they set their prices.”

They also know that many people who test-drive their content will eventually become paid subscribers, he added. This seems to be the case, since the majority (57%) of those who do use someone else’s account said they would purchase their own subscription if they were cut off.

81% spend on streaming subscriptions each month

Besides the people who share accounts, 8 in 10 people are paying for at least one streaming service of their own. Younger viewers are the more likely streamers — 92% of millennials and 89% of Gen Z, versus 80% of Gen X and 65% of baby boomers.

But the biggest market for streaming services seems to be parents with kids under 18, as 93% of those subscribe. According to Schulz, this comes as no surprise, especially during the pandemic when parents have leaned on in-home entertainment for kids stuck in lockdown.

Netflix is the most popular streaming service…

YouTube’s paid subscribers tend to be much younger, with just over a quarter of Gen Z subscribing versus just 10% of Gen X.

…but Netflix is also the subscription consumers would cut first

Of those who have a Netflix account, 27% said they would give it up over their other streaming subscriptions if forced to choose.

1 in 4 spend more than $50 monthly for multiple accounts

Parents with kids under 18 spend more money on streaming than anyone else — 34% said their monthly bill exceeds $50.

And the younger the viewer/listener, the more streaming services they have: 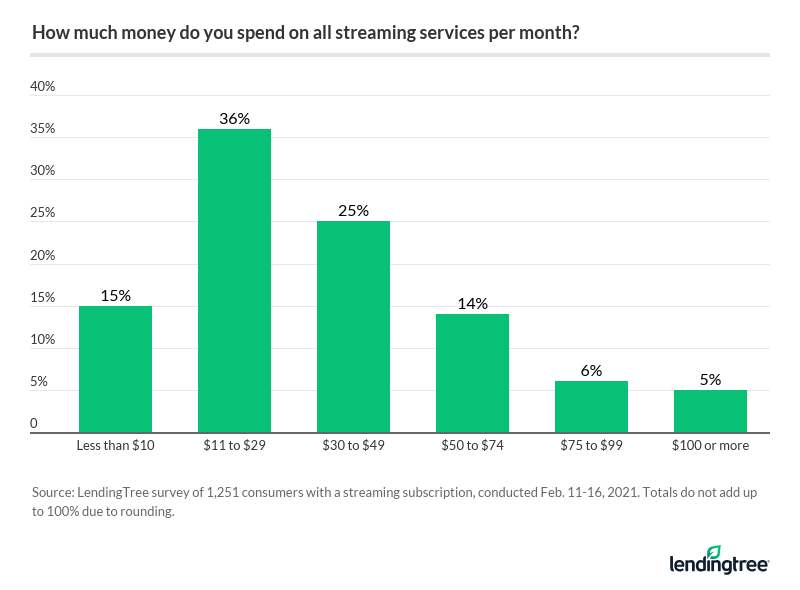 Some credit issuers offer bonus rewards for streaming, but only 37% of consumers are taking advantage.

“Credit card issuers have fallen in love with streaming rewards in the past year, so if you spend a lot of money on streaming, it’s worth looking into what your cards offer,” said Schulz.

Just be sure that you keep your spending in perspective, he added: “For example, don’t throw away a good grocery rewards card for one that gives more for streaming.” 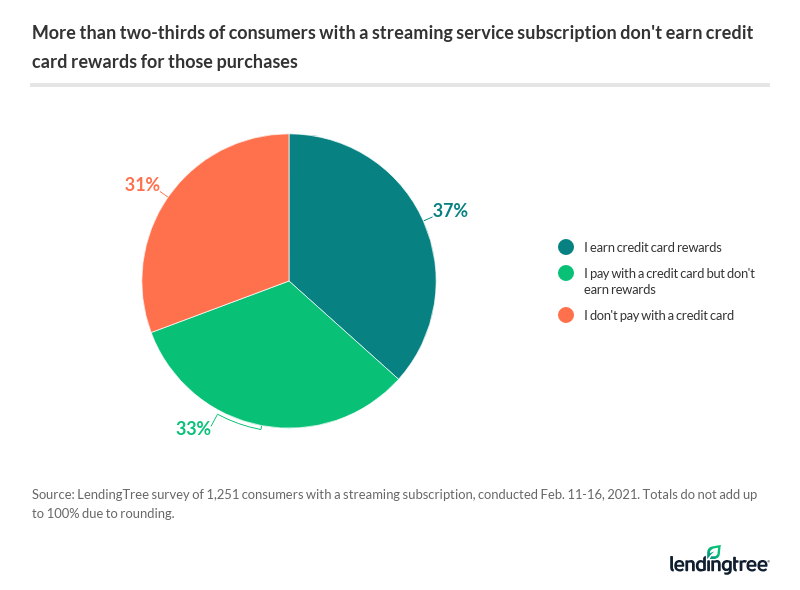 Tips to trim your streaming spend

Those small monthly charges can quickly add up, and many consumers have a small financial margin of error, said Schulz. If you’re hooked on streaming — especially while entertainment options are limited — here are some ways to keep it affordable.

Ditch the services you’re not using. Assess what you’ve watched over the past month or two, and if there’s a service you haven’t logged into, close it. “Streaming services make a fortune off of people who forget to cancel their accounts,” said Schulz. “Don’t be one of them.”

Make sure you opt out after free trials. You had good intentions — sign up for a free trial, watch the show everyone’s been talking about, then cancel. But oftentimes, people forget. To avoid this, Schulz recommends setting a calendar reminder.

“If you end up wanting to keep the service when that reminder pops up, that’s fine. But if you do want to cancel, the reminder will help make sure it gets done,” he said.

Watch out for streaming cost creep. You may have some wiggle room if you’re not going out much, but be sure you’re keeping track of escalating recurring charges. Itemize each individual service into your budget, said Schulz. “That way, if you need to cut back, you can easily see what you subscribe to and you can make decisions from there,” he said.

Look for deals. You may be eligible for free or discounted subscriptions. For example, if you’re a T-Mobile customer, Netflix is free on certain plans. Those who purchase an Apple device can get a free year’s subscription to AppleTV+, while Hulu, Spotify and Showtime offer a bundle package for students. Plus, some services are cheaper or free if you use versions that run ads.

Rotate/limit subscriptions. To further control those recurring monthly subscription charges, you can set a limit of, say, two subscriptions at a time. It’s fairly easy to cancel those you aren’t viewing as much and resubscribe at a later date.

LendingTree commissioned Qualtrics to field an online survey of 1,546 Americans, conducted Feb. 11 to Feb. 16, 2021. The survey was administered using a non-probability-based sample, and quotas were used to ensure the sample base represented the overall population. All responses were reviewed by researchers for quality control.