It was an announcement heard around the virtual world: In April 2022, Netflix announced its plans to crack down on password sharing.

Plenty of consumers — 30 million households in the U.S. and Canada, according to Netflix — will need to rethink their streaming strategy as the company makes it harder to share.

The newest LendingTree study finds that 38% of Americans use someone else’s login to access a streaming service, the same percentage as in early 2021. (Fair enough, sharing is caring.) However, if they lose access to their favorite subscription, 45% of those consumers don’t plan to purchase the service. Where did the love go?

Let’s take a closer look at how consumers are reacting to Netflix’s news and what their plans are for digital entertainment moving forward.

Netflix is threatening to crack down on password sharing — and it can be understandable why.

Almost 4 in 10 Americans (38%) use someone else’s password to access a streaming service, with this percentage being highest among Gen Zers (ages 18 to 25) (71%) who likely have their parents to thank for their access.

Women seem more prone to password sharing, with 42% admitting to using someone else’s login to watch streaming services, compared with 34% of men. Women, however, are less likely to do so without explicit permission from the account holder. While only 23% of women use someone else’s digital streaming account without the account owner’s knowledge, 52% of men report this.

But despite getting value out of these streaming services, 45% of consumers who borrow access to their favorite subscription service wouldn’t purchase an account if they lost access. 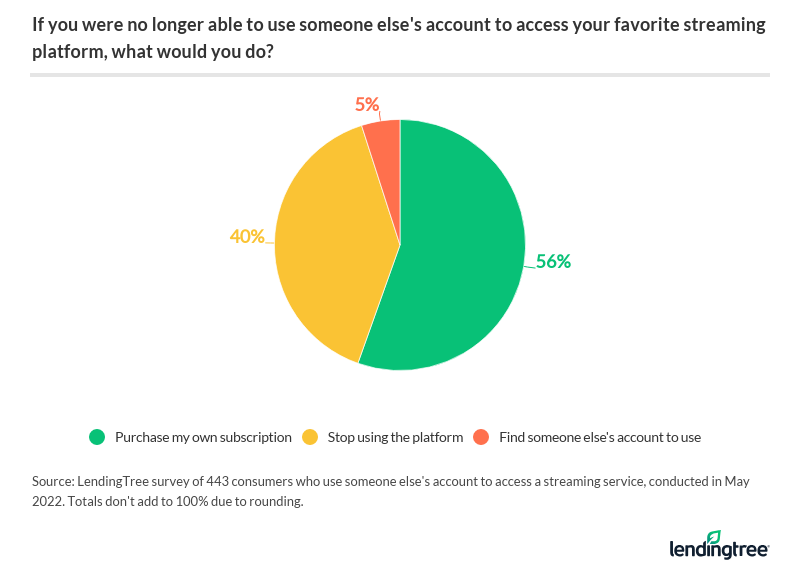 “Boomers are more likely to be on a fixed income than their younger counterparts are, so they just may not be as willing to pay for these streaming services,” says Matt Schulz, LendingTree chief credit analyst.

Gen Xers and baby boomers are also more likely than younger Americans to have cable subscriptions, Schulz says. Because of this, they might see streaming as a fun extra rather than an essential expense.

Amid this discussion, there don’t seem to be too many sleepless nights over password sharing, as more than half of consumers (55%) feel it’s fair to the company. More than a third of consumers (38%) say they believe the streaming company already makes a ton of money off their customer base — though we have a feeling Netflix disagrees.

Those with household incomes of $100,000 or more are least likely to feel that password sharing is fair to the streaming companies, likely because they feel less of an impact on their budget. More than half (56%) of consumers in this income group feel this way.

Streamers are spending more on subscriptions than last year

Just because someone uses a password to access one streaming platform doesn’t mean they aren’t paying for others.

Streamers are spending more than last year, with 40% saying they pay $50 or more a month this year, compared with 25% who said the same in 2021. 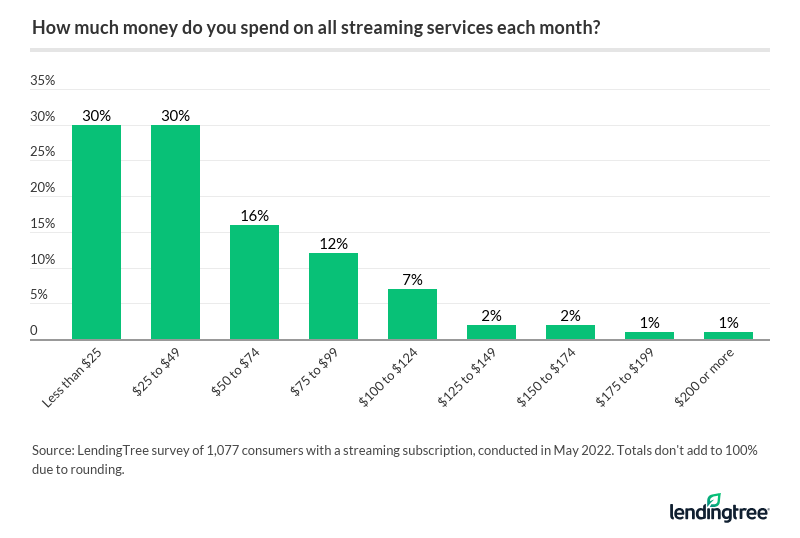 Some consumers are even doubling up and spending on both cable and streaming services, with 44% of those with cable still spending $50-plus on streaming every month.

“People love movies, TV and music,” Schulz says. “They were a lifeline during the past two years when so many of us spent so much time inside and isolated. But even in the best of times, people spend a huge amount of time and money on these things. That’s not going to change.”

But Schulz believes rampant inflation may slow streaming spending down.

“Tough economic times require tough choices,” Schulz says. “As much as we love streaming the latest shows and songs, they are a luxury for most Americans. For those with small financial margins for error who are struggling with skyrocketing gas prices and grocery bills, it might become necessary to cancel some of these streaming services for a while to help make ends meet a little more easily. It’s all about prioritizing what matters most.”

We highlighted how much streamers spend now, but how much are Americans willing to pay each month on a single streaming service? The majority of consumers aren’t willing to spend $20 or more on a single platform. Interestingly, 7% of respondents with children younger than 18 are willing to spend at least $70 on a service — higher than any demographic outside of consumers making $100,000 or more. This could likely be the case because parents of minor children have more people in their household to entertain.

43% of streamers canceled a subscription in the past year, and many switched to a new platform

On average, consumers pay for three streaming platforms, led by:

And while 43% of people with a streaming service subscription have canceled at least one in the past year, they didn’t necessarily do so to save money. 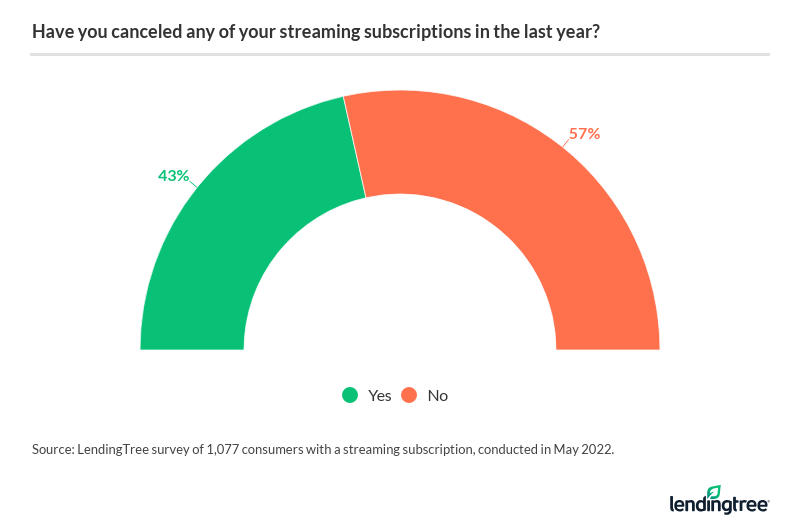 A desire to focus on specific content that meets their entertainment needs may be influencing their purchasing decisions, as 35% of streamers say they have more subscriptions than last year. This suggests that those who cancel choose to switch platforms.

Unlike cable subscriptions, which have traditionally been nightmarish to cancel, streaming services tend to be easier to stop and start quickly.

And what causes consumers to subscribe to a particular service? Half (50%) of consumers with a video streaming subscription subscribed to access a specific show or movie; 1 in 5 (20%) will cancel their subscription after watching that season or series. 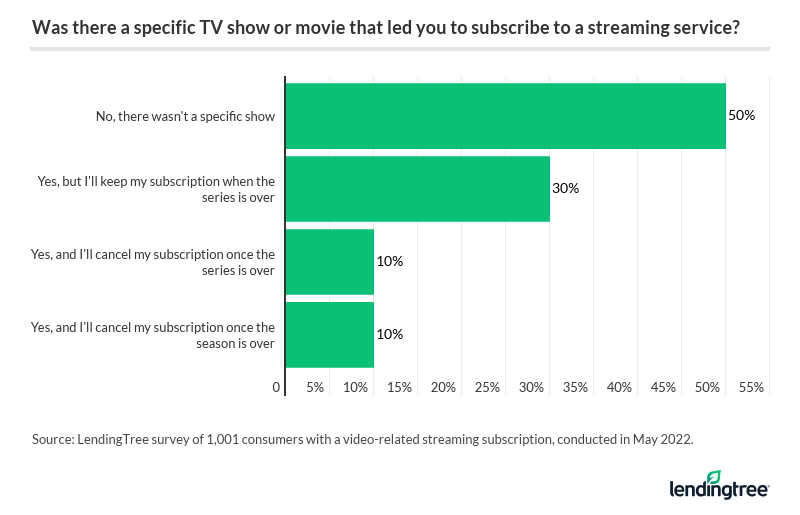 Women, Gen Zers, those with cable and parents with kids younger than 18 are most likely to subscribe to gain access to a specific show.

“People are far more likely to watch a buzzed-about show on one streaming service, cancel the subscription once they’ve watched and then jump to the next service and the next hot show,” Schulz says. “It puts enormous pressure on these streaming services to keep creating great content, because folks will take their entertainment dollar elsewhere if they don’t.”

Netflix, Amazon Prime Video and Hulu are streamers’ most-used platforms, so it’ll be interesting to see if consumers pony up and buy their own Netflix account if need be.

Netflix (14%) and Disney+ (12%) have the largest percentages of streamers that mooch off of someone else’s account, another reason it’s understandable why Netflix is feeling the push to crack down on password sharing. Will Disney+ be next?

Take a closer look at which streaming platforms are the most popular with consumers: 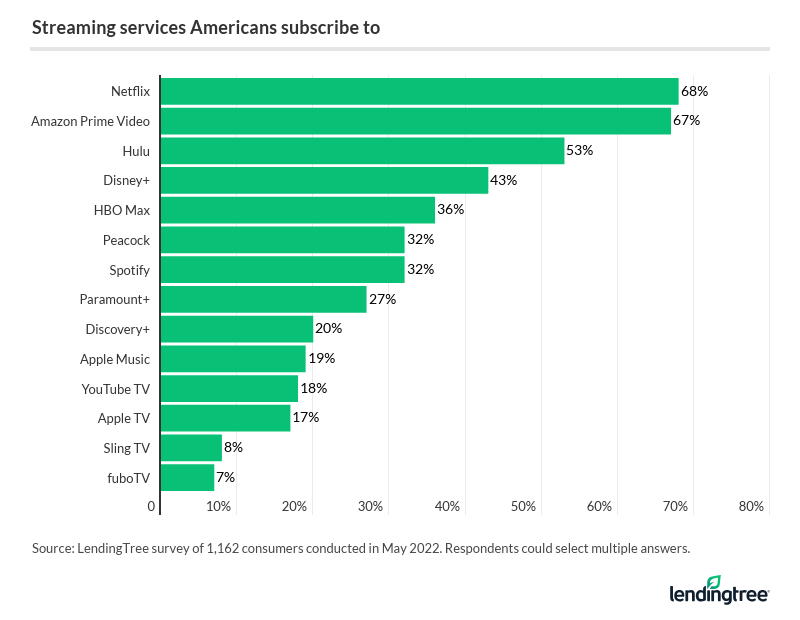 If someone is looking to buy a streaming subscription but wants to keep costs lean, here are a few options Schulz recommends for saving money.

LendingTree commissioned Qualtrics to conduct an online survey of 1,162 U.S. consumers,  fielded May 16-23, 2022. The survey was administered using a nonprobability-based sample, and quotas were used to ensure the sample base represented the overall population. All responses were reviewed by researchers for quality control.

45% of consumers who use someone else’s login for their favorite service say they wouldn’t purchase an account if they no longer had access to it.