Financial Resolutions and Goals in 2018

Americans are generally optimistic about their financial prospects in the upcoming year, and plan to tackle their debt first, according to a 2018 New Year’s survey commissioned by LendingTree.

Some of our key findings were:

Fewer than 10% of respondents said they expected their finances to worsen in 2018. Most economic indicators appear to be positive for Americans right now. Jobless rates are at their lowest levels since 2000, while home prices continue to rise in most markets, and stocks continue their nearly decade-long rally. Meanwhile, a recent overhaul to the federal tax system will mean more take-home pay for many Americans in 2018.

There weren’t many differences in optimism between the sexes: Men were only slightly more pessimistic about their financial prospects than women.

The survey found that many people are planning on making some changes that may affect personal finances in 2018. Twenty-seven percent of respondents expect to purchase a new car in 2018. This was followed by 23 percent who plan to move or relocate sometime this year, 20 percent who expect to switch jobs and 13 percent who believe they’ll become homeowners in 2018. 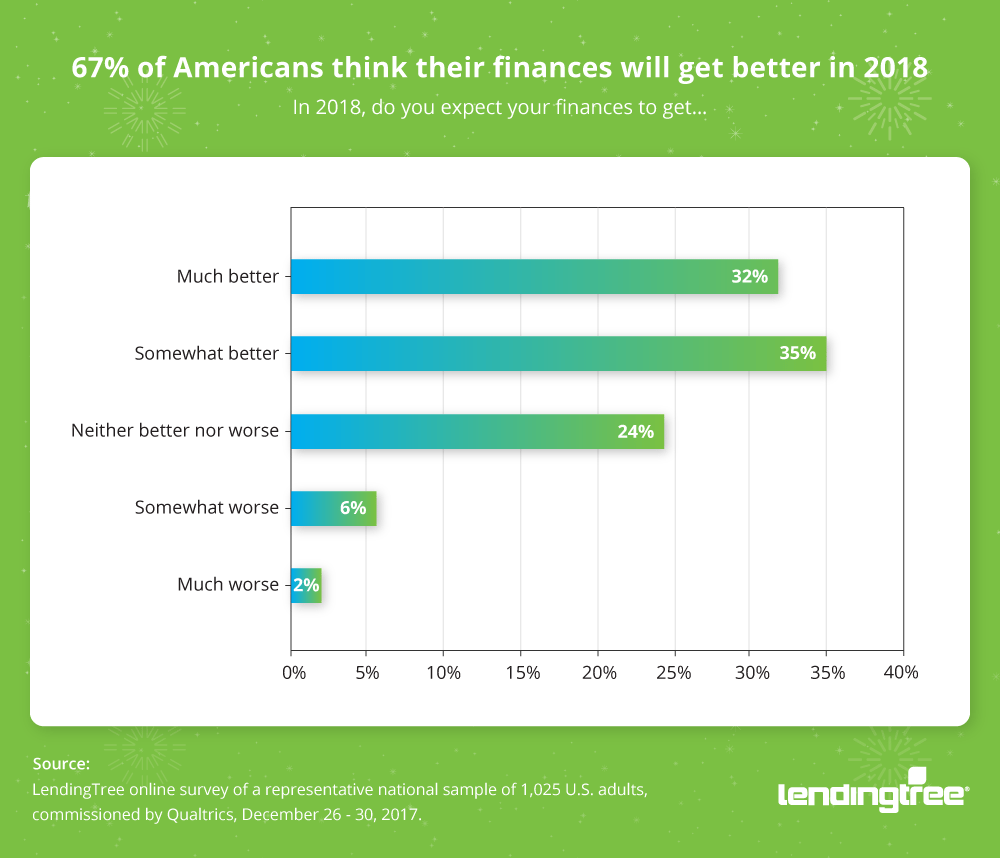 That’s not to say Americans had no financial concerns, and a majority of those we surveyed had more than one financial concern. Topping the list of concerns were unexpected expenses (43%). Making ends meet was a worry for one-third of everyone asked (34%), followed by healthcare costs (29%).

Perhaps unsurprisingly, fewer younger Americans were concerned about healthcare costs than boomers and older Americans. Twenty-two percent of millennials listed healthcare costs as a concern. But that still was a significant worry; only making ends meet (30%) and unexpected expenses (39%) were listed by more millennials. For those over age 50, healthcare expenses ranked as the second largest worry, and 40 percent noted it was a financial concern in 2018.

But every demographic we asked listed unexpected expenses as their top concern. Forty-three percent of Americans list it as a concern. Previous studies have shown that an even higher percentage of Americans don’t have an emergency fund that could be used to at least partially pay for those events.

Only 5 percent of those we asked said they had no financial worries. Millennials were the least worry-prone, listing an average of “only” 2 financial worries, while boomers had 2.1 worries on average. 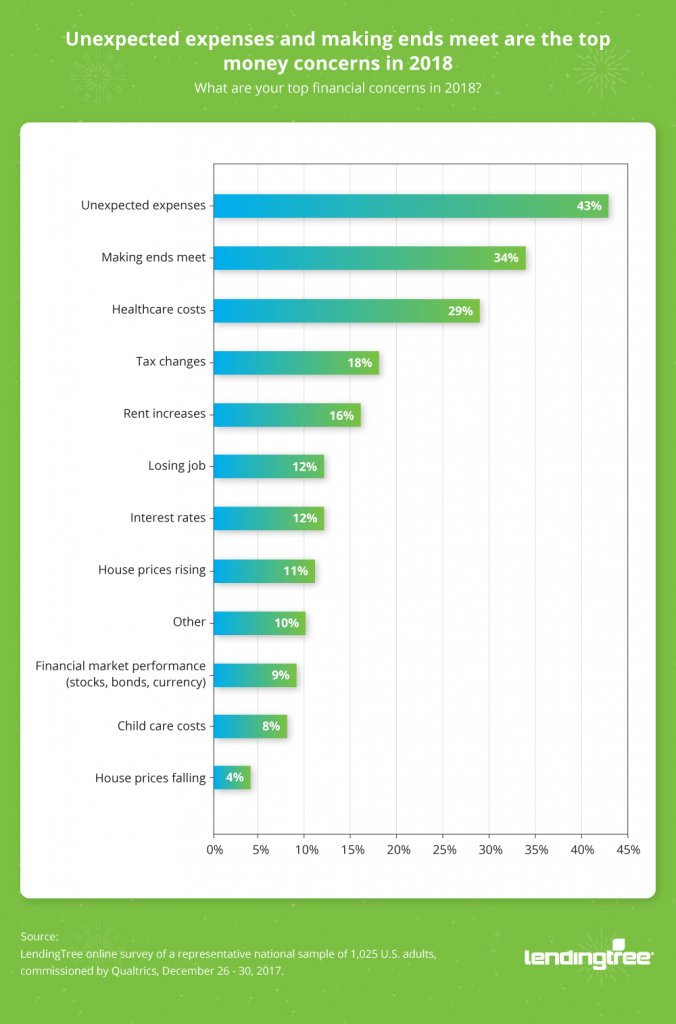 Home prices will rise, according to most (though some would welcome a fall)

We also asked Americans about what they thought would happen to house prices and rental where they currently live. While not an absolute majority, more of those asked expect home prices to rise, as opposed to remaining level or falling. The percentages were similar no matter the respondents’ age or gender. Only 10 percent of respondents expect home prices to fall. 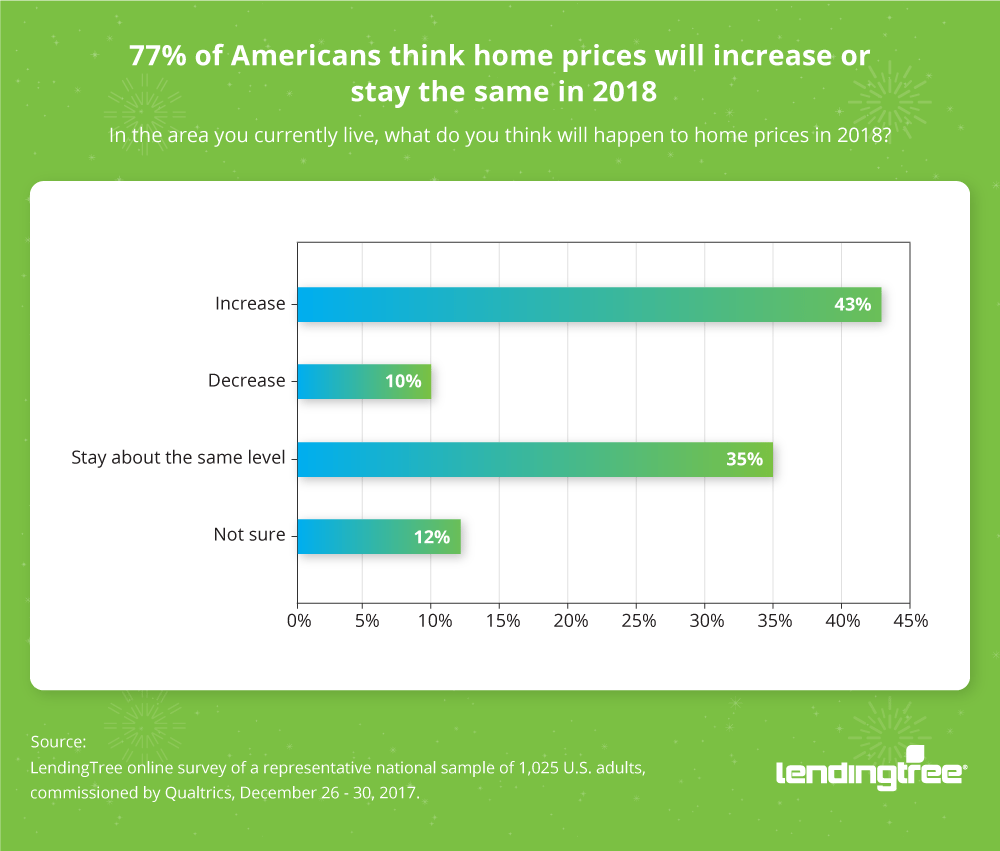 Somewhat more Americans we asked expect home rental prices to rise – 49 percent. And only 7 percent expect rents to decrease in 2018.

Windfall would most likely be used to pay down debt

If you suddenly stumbled upon $10,000, what would you do with the money? Most likely, Americans said they would retire debt.

Thirty-six percent of those we asked suggested that paying down debt – whether it was credit-card based, or from an existing mortgage or loan – was their preference, easily outpacing the next most likely answers of investment (14%) and spending on family (12%). 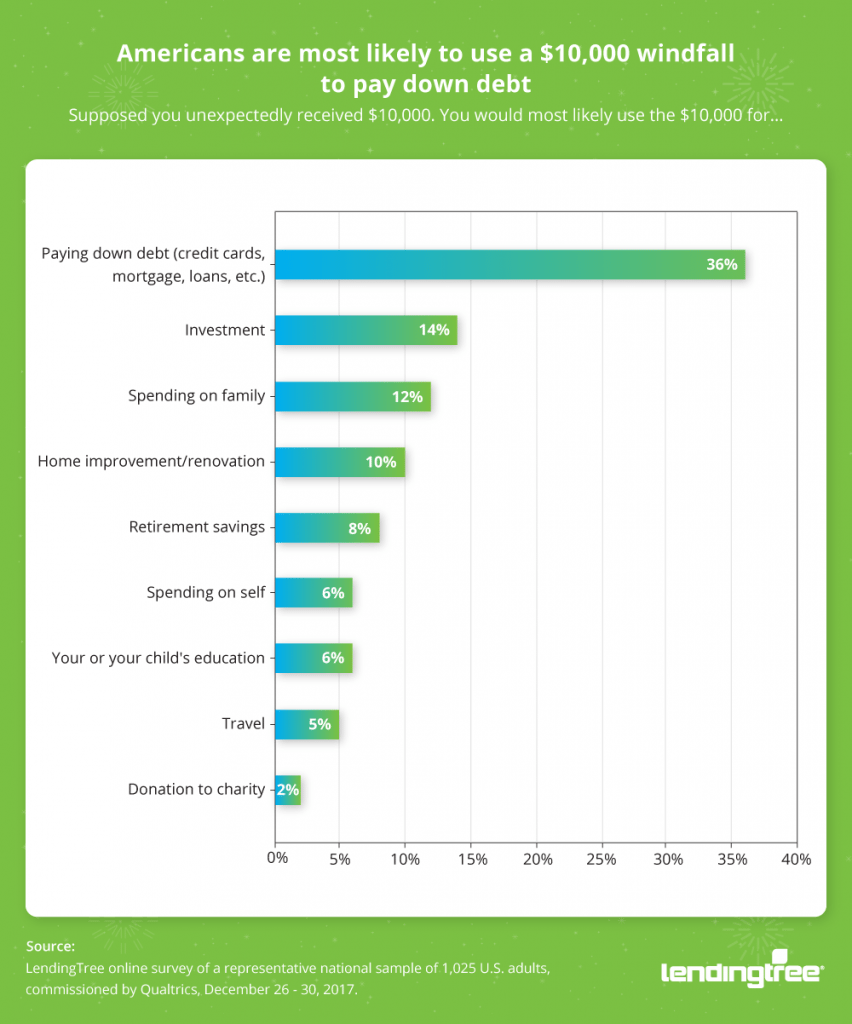 Debt consolidation is on the mind of many, but the methods are less clear

We asked Americans if they thought they might consolidate the debts this year. Overall, 13 percent of Americans were considering debt consolidation.

But when we asked those 13 percent if they knew where they would obtain the financing for the debt consolidation, more of them didn’t know where versus those who did. Only 40 percent of those looking to consolidate their debt knew where they would go to accomplish that task (the most popular choice was going to a bank or credit union). 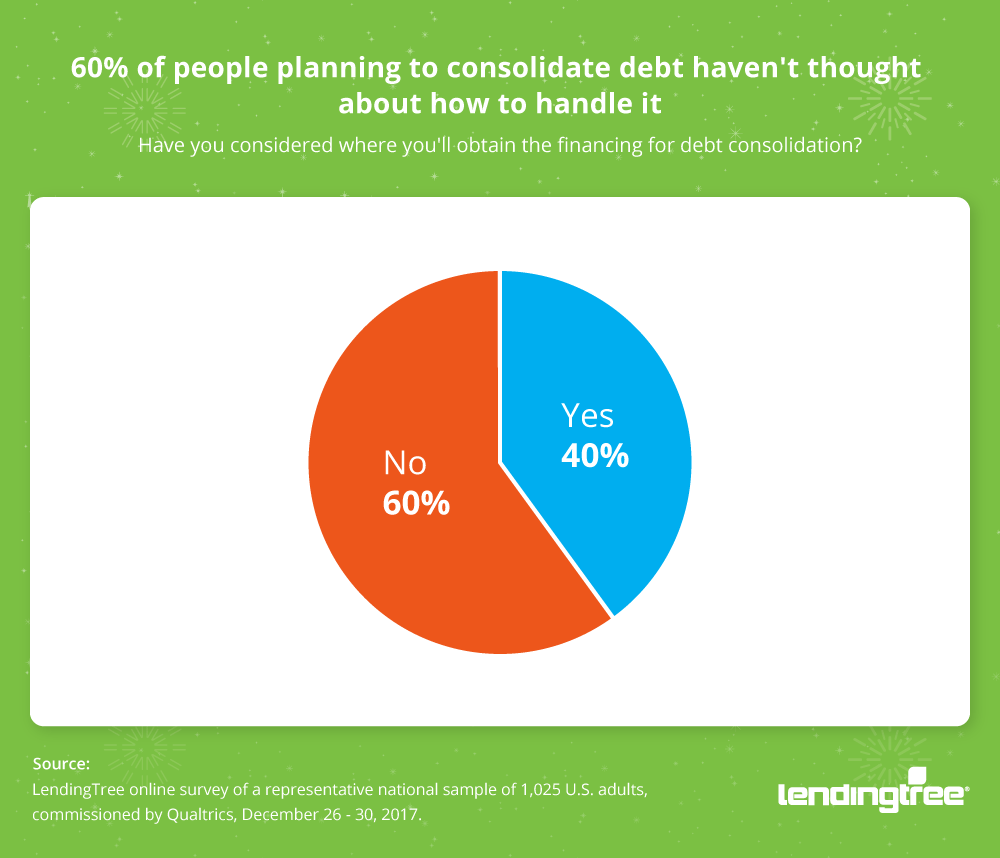 Despite some uncertainty about the specifics, Americans expressed that paying off debt was the financial matter they were most confident about accomplishing in 2018, outpacing that of controlling spending and pay raises. Thirty-one percent said they were confident they would pay off debt this upcoming year. Indeed, most people chose the financial concerns they have the most control over (like controlling spending and paying down debt) than more economic matters that were largely out of their control (like home prices and financial market performances). 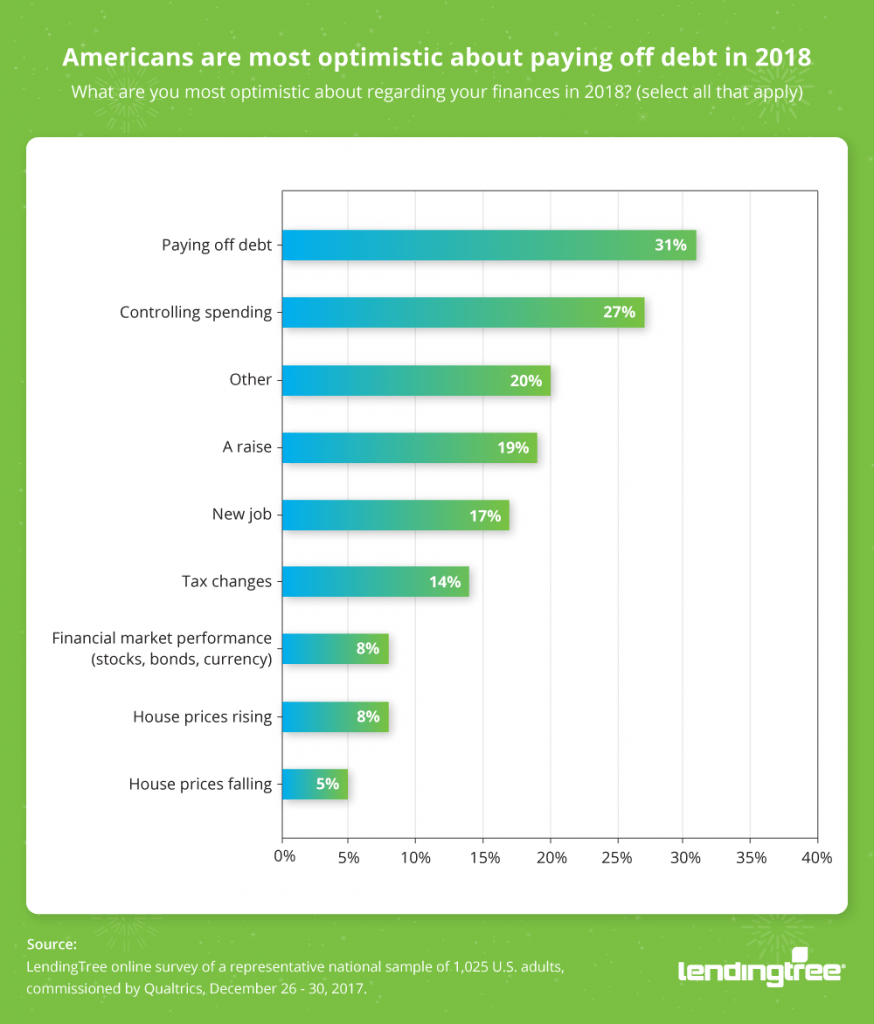 Finally, we asked Americans about their budgeting habits. Almost everyone we asked – 95 percent – budgets at least once a month. And furthermore, most Americans were, dare we say, compulsive about it. Fifty-five percent budget a few times a week, and 30 percent budget every day. 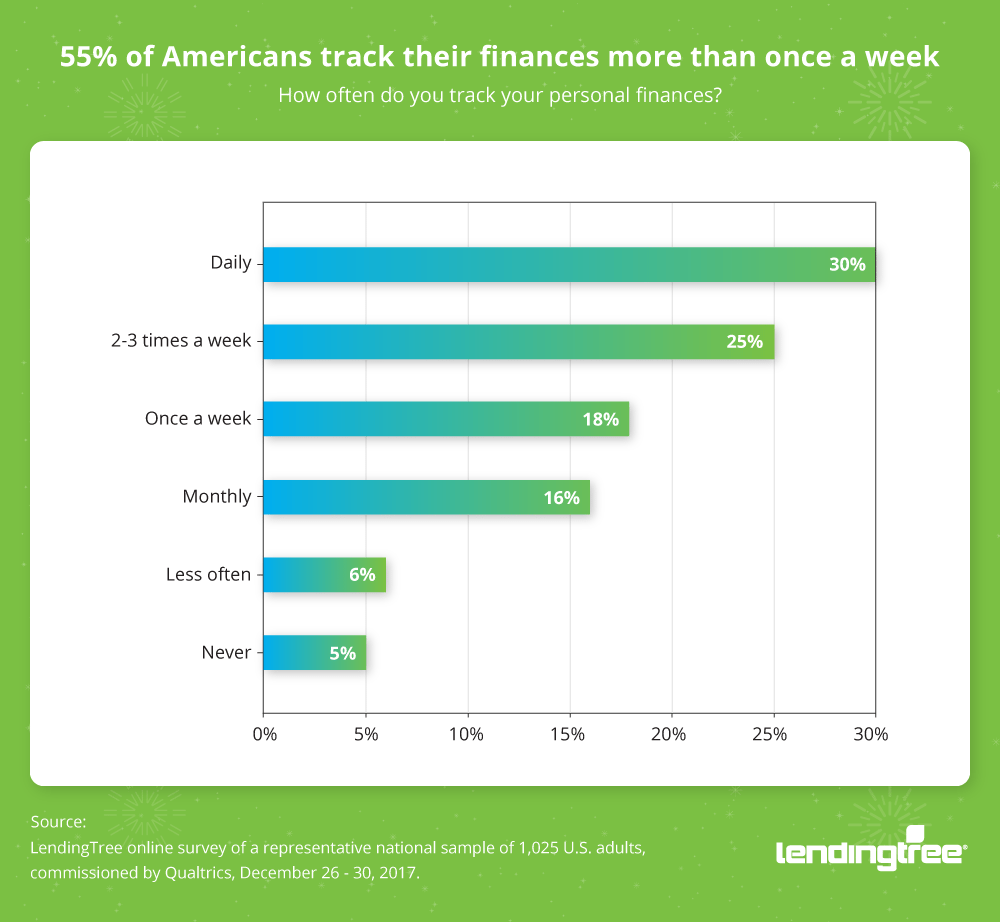 The rise of smartphone apps perhaps explains the numbers behind our finding. Nearly half of the people we asked use either a smartphone budgeting app or an computer-based budgeting program to manage their finances. But old-fashioned paper is still relied upon but many. Twenty percent prefer pen and paper, and an additional 13 percent rely on account statements sent by their financial institutions. 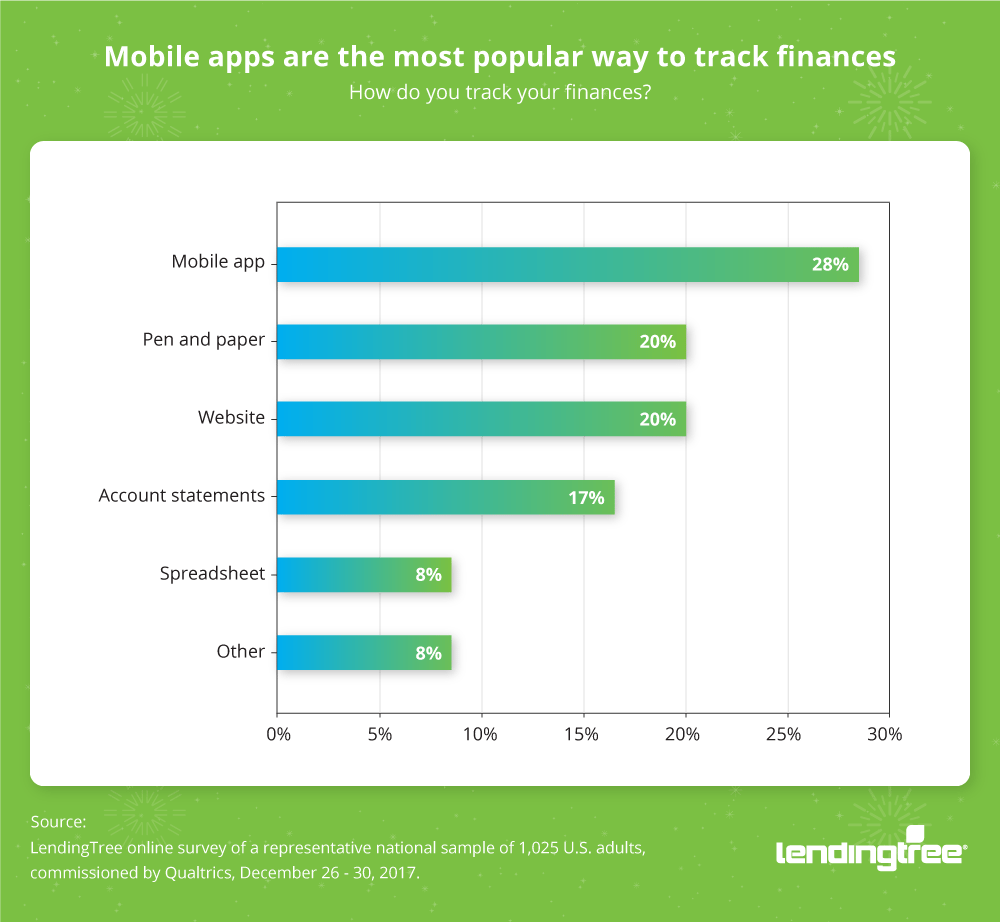 We surveyed more than 1,000 Americans on their financial goals and sentiments in December 2017, and commissioned Qualtrics to administer the survey on December 26-30, 2017.