More Than 196 Million Americans Used a Delivery Service Within the Last Year, and About 30% Admit to Overspending

More than three-quarters of Americans have placed an order with an on-demand delivery service in the last year, according to a recent LendingTree survey of more than 1,000 consumers. Fueled by the pandemic, many shoppers have grown accustomed to getting all sorts of items — from food and groceries to medicine and household items — delivered to their door. Some, notably, are even spending more than they can afford.

See which delivery services are most popular, who’s using them and if the trend is expected to grow.

With retailers like Amazon and food deliveries from apps like UberEats and DoorDash leading the way, more than 3 out of 4 Americans are using on-demand delivery. The youngest consumers are most likely to be placing orders from home, including 92% of Gen Z and 89% of millennials, with food delivery the most popular category. Meanwhile, for the 77% of Gen X and 56% of baby boomers waiting for the delivery truck to pull up, it’s mostly for retail purchases.

With the popularity and availability of on-demand delivery, some credit card companies have started offering bonus points and rewards programs aimed at consumers who spend regularly on delivery or rideshare services. As such, 37% of respondents said they’ve opened a new rewards credit card specifically to take advantage of such programs. Among younger consumers, the percentage jumps even higher: 51% for Gen Z and 53% for millennials. 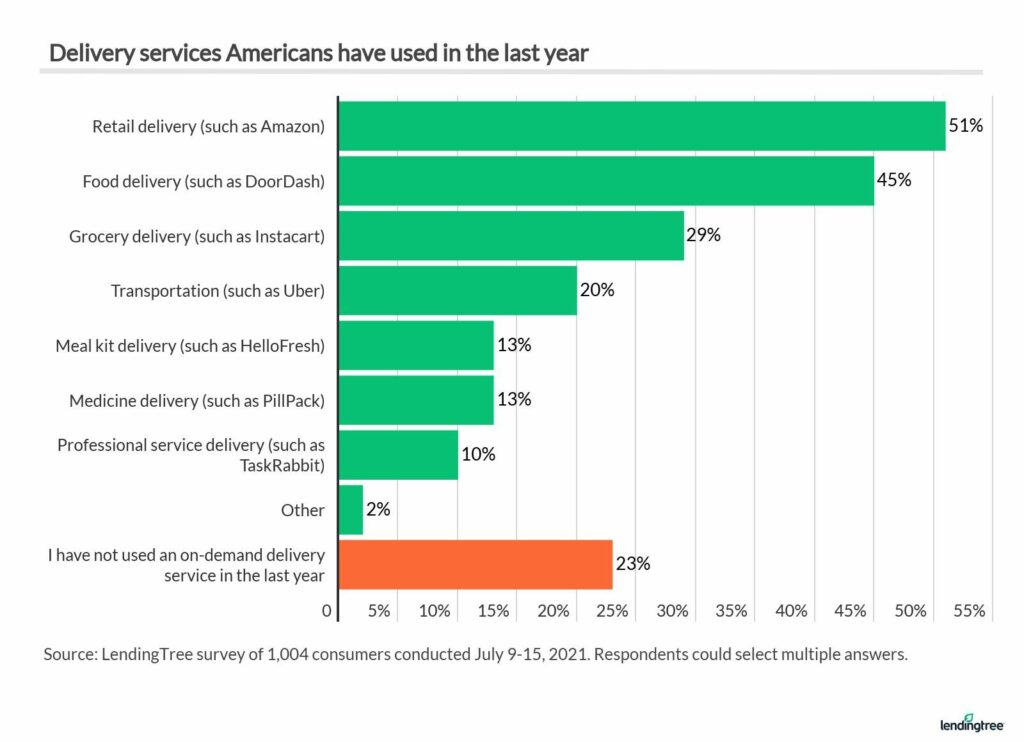 Consumers are willing to spend big to save time and effort

Across all demographics, the average monthly spending on delivery services totals nearly $2,000 per year ($157 per month). Some groups, though, are spending more than others: For example, parents with children under 18 spent more than any other demographic at $260 per month — that’s over $3,000 per year.

For anyone who’s had to go shopping while lugging strollers, diaper bags and young kids, it’s easy to understand why people are willing to pay more to avoid those exhausting trips. In fact, parents may even tell you that they save money by not having kids add extra items to their shopping carts. Not to mention that during the pandemic, many parents may feel safer keeping their unvaccinated tots out of crowded stores.

Regardless of parent status, younger consumers in general are the ones spending more on delivery than older generations. Both Gen Zers and millennials spent just over $200 per month, while Gen Xers stayed in the $150 ballpark and boomers spent just under $80. This could be attributed to the comfort level of using apps and online platforms to place orders. 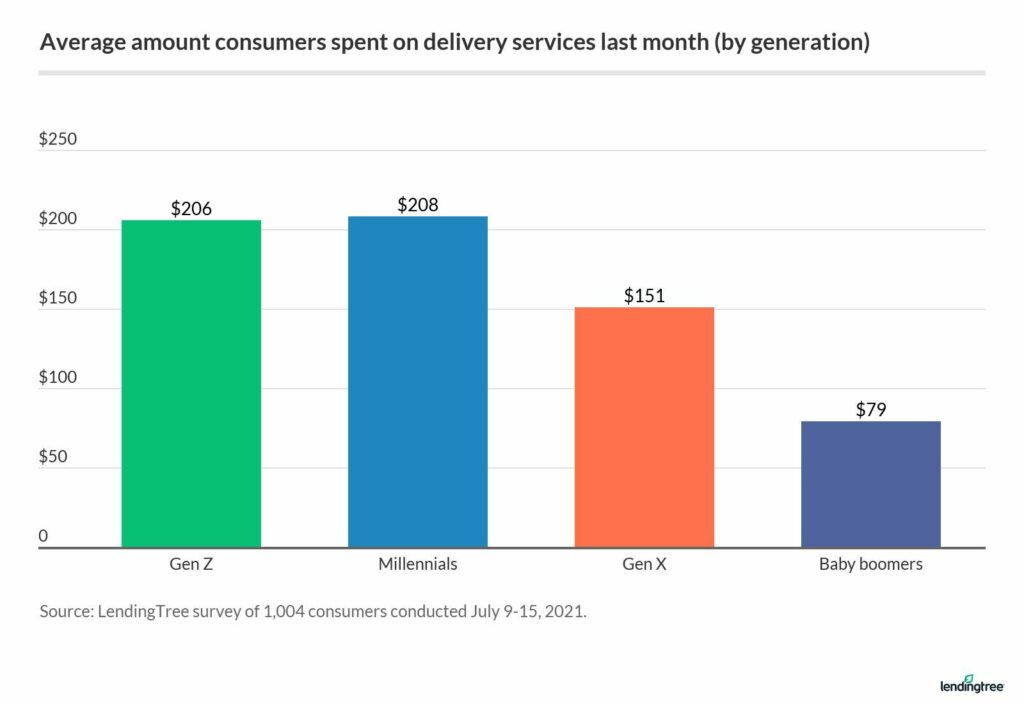 Many people relate to the idea that “time is money” and, therefore, are willing to pay for the convenience of not having to drive to, shop for and lug their purchases. In fact, 70% of Americans said they’re willing to spend extra money — say, an extra $10 per week on groceries to avoid setting foot in the store. While more than one third (37%) would spend no more than $50 per month on delivery fees, nearly 1 in 5 (19%) said they would shell out an extra $100+ for home delivery services. 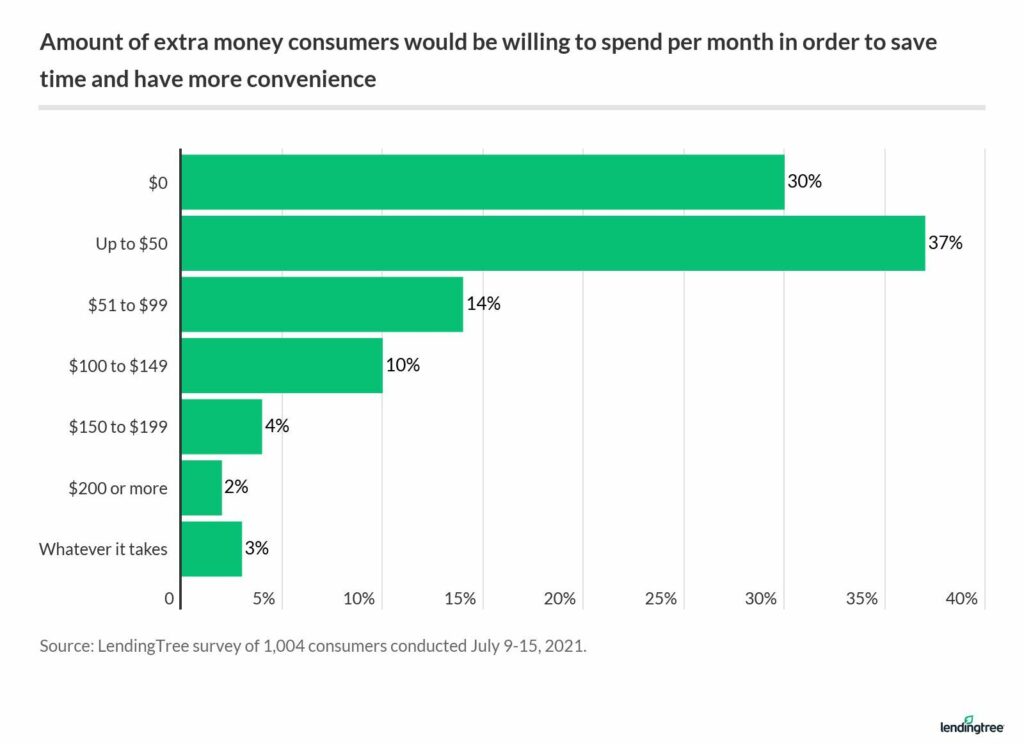 Of course, sometimes, the cost of delivery convenience is sometimes beyond what a consumer’s budget allows — but that’s not stopping some people from being on a first-name basis with Amazon and UberEats drivers. In fact, nearly 3 in 10 (29%) of Americans admit to spending more than they can afford on delivery services. Overspending is most prevalent among younger consumers (48% of Gen Z and 39% of millennials) and parents with kids under 18 (48%), all of whom own up to blowing their budgets on delivery services.

Most increased their usage of delivery services during the pandemic, and 45% will continue that frequency in the future

There’s no doubt that the coronavirus pandemic increased the usage of on-demand delivery services in many households. The survey found that those placing orders at least once per week went from 30% pre-pandemic to 37% during the pandemic.

Some consumers even said they used on-demand delivery services daily during the pandemic, including 15% of Gen Z and 10% of millennials. 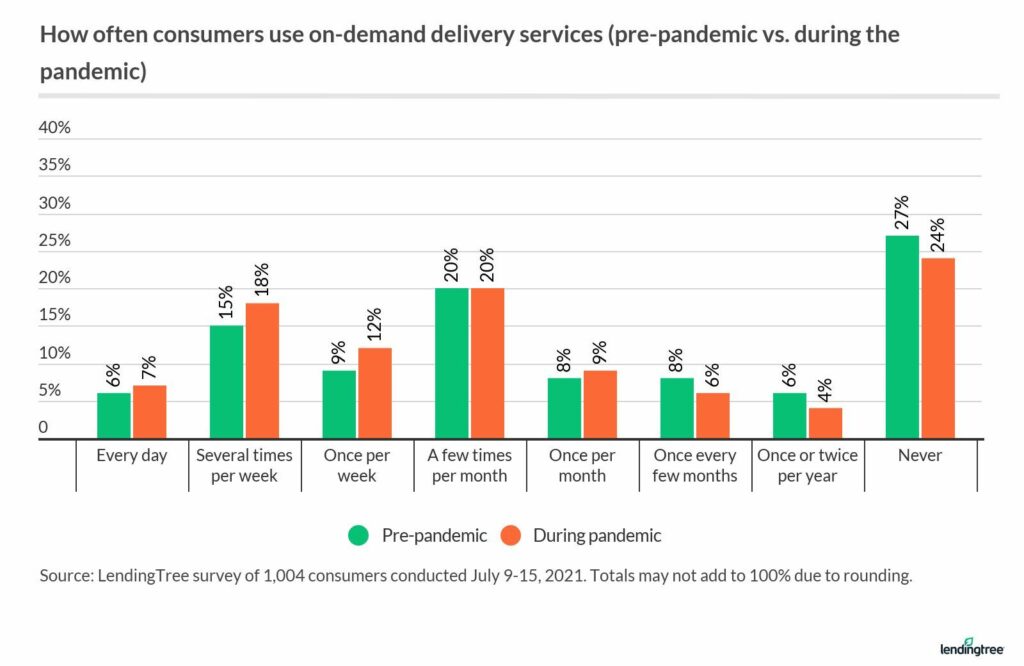 Even when restrictions ease and people feel safer, on-demand delivery habits are here to stay for nearly half of Americans — 45% said they will continue using delivery services just as often as they did during the pandemic. However, the group that spent the most on delivery (parents of kids under 18) noted being less likely than respondents overall to continue once the pandemic subsides.

Reliance on delivery services all comes down to what consumers value. For instance, baby boomers were most likely to cite “not having to leave their homes” as their top reason for ordering (65%), while millennials (37%) chose “saving time” more than the other demographics and 25% of Gen Z said they turn to delivery to “save money.”

Overall, here’s how respondents ranked what they valued most when it comes to delivery services:

Enjoy the convenience of delivery without breaking the bank

Having everything from personal care items and clothing to food and meal kits delivered right to your home — sometimes in the same day — adds up. Here are some ways to enjoy deliveries without blowing your budget:

LendingTree commissioned Qualtrics to field an online survey of 1,004 U.S. consumers, conducted July 9 to July 15, 2021. The survey was administered using a nonprobability-based sample, and quotas were used to ensure the sample base represented the overall population. All responses were reviewed by researchers for quality control.

More Than 196 Million Americans Used a Delivery Service Within the Last Year, and About 30% Admit to Overspending

Fueled by the coronavirus pandemic, many shoppers are spending more using on-demand delivery services, with some admitting to spending too much.