1 in 4 Americans Are Currently Boycotting a Product or Company

Companies today need more than good products at fair prices to succeed — they also need to reflect their customers’ values.

The latest LendingTree survey of more than 2,100 consumers discovers that 1 in 4 Americans are currently boycotting a product or company they’d spent money on in the past. Why? Not approving of specific corporate political donations is the No. 1 reason, but the way companies treat their employees and handle social issues is also an influence on them.

“It means that millions and millions of Americans have felt strongly enough about a company to take their money elsewhere,” says Matt Schulz, LendingTree chief credit analyst. “And those with the highest incomes are the most likely to boycott, making it an even bigger deal for businesses.”

25% of consumers are boycotting a product or company

While 1 in 4 Americans are currently boycotting a product or company they’d spent money on in the past, certain consumers are more likely to boycott than others. That includes:

The following graphic walks through response rates among key demographics: 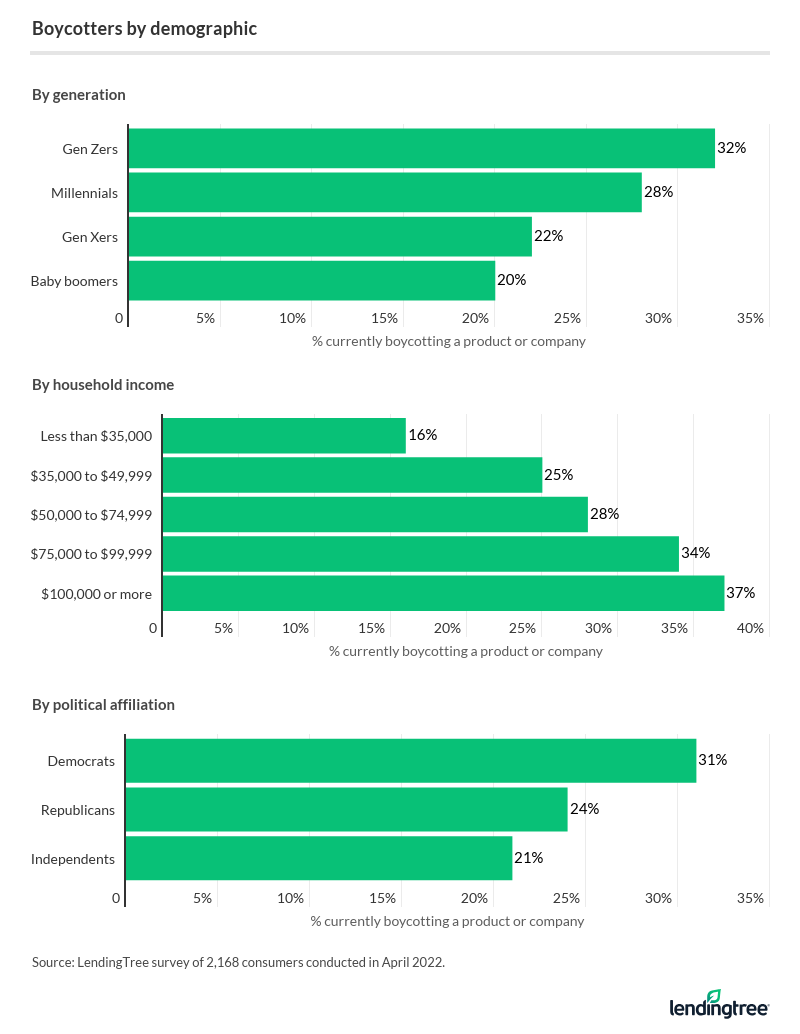 Gender and location can also influence how likely someone is to boycott. Men (29%) are more likely to boycott than women (21%). Meanwhile, boycotting appears to be more common in the Northeast and West (29% are currently boycotting) than in the Midwest and South (both 22%).

While a quarter of Americans boycotting a product or company they used to spend money on may seem like a large percentage, this rate is declining. The last time LendingTree conducted this survey in July 2020, 38% were boycotting at the time. This may have been because tensions were running especially high that summer — the coronavirus pandemic was continuing along with protests in the wake of George Floyd’s murder, furthering a sense of fear, stress and confusion.

Boycotting extends past products and companies for some. Nearly a quarter (24%) of respondents haven’t traveled to a specific state or country due to legislation or policies they disagree with. This percentage rises significantly with high-income earners — again.

Those with a household income of $100,000 or more are the most likely to choose not to travel to locations that have policies or legislation they disagree with (35%), followed by:

Why is boycotting companies so common nowadays?

“Companies seem to be less afraid to take a political stance than they once were,” Schulz says. “Businesses were once afraid of saying anything that could possibly offend anyone, but that’s largely a thing of the past. Now businesses are leaning into politics, knowing that some might be horrified and turn away, while others might see it as a new reason to embrace that brand.”

What is motivating consumers to boycott these products and companies? The No. 1 reason is political donations (39%), followed by treatment of their employees (34%), the company’s stance on social issues (33%) and their policy positions (30%). 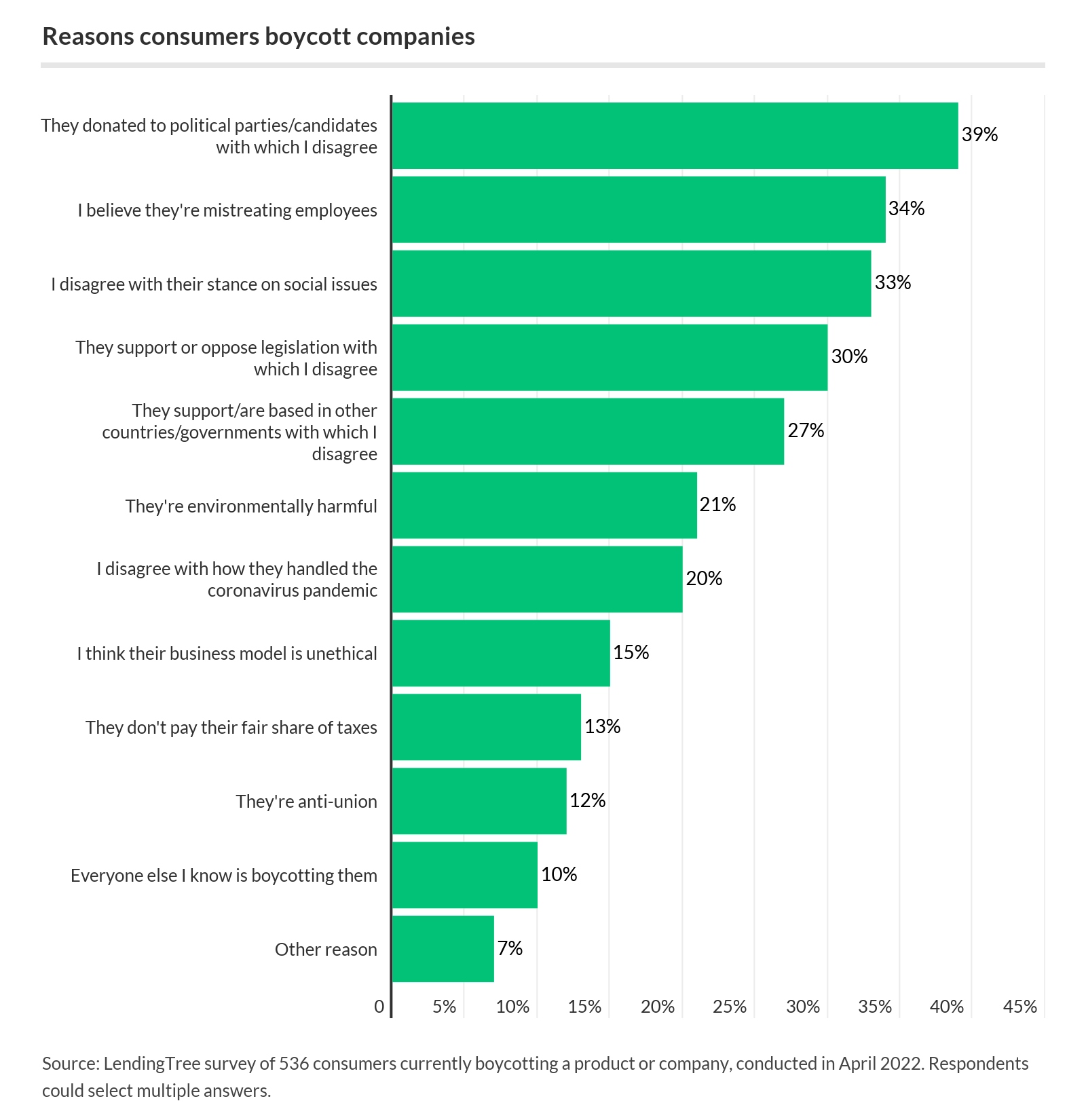 Among the top reasons why, Democrats and Republicans differ. Democrats are most likely to cite the company donating to political parties or candidates they disagree with (43%), while Republicans cite disagreements on social issues (36%).

“Politics — us-versus-them and picking sides — is driving so much of American life today, so I am not in the least bit surprised that political issues are causing people to boycott,” Schulz says. “However, I also think that people are more and more willing to let their voices be heard in support of causes they believe in or against things they have issues with. That’s true on both sides of the political spectrum and can be a really good thing, but it isn’t without risk.”

Under the right circumstances, many would be willing to go back to patronizing businesses they boycotted.

Loved ones play an outsized role in whether someone is influenced to boycott a company. Almost half (47%) say friends and family influence their decision to boycott, followed by politicians (20%) and celebrities or influencers (19%). 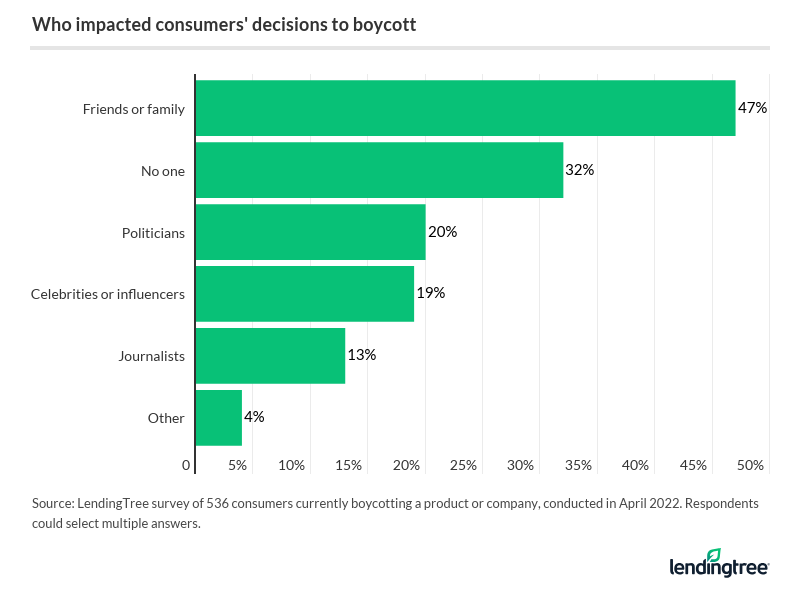 Age plays a prominent role, too. Gen Z boycotters (34%) say celebrities or influencers have impacted their decision, while only 4% of baby boomers report the same star-struck influence.

“It is inevitable that you will be influenced heavily by those with whom you are closest,” Schulz says. “It’s also no surprise that we tend to follow those with power, money, glamour and influence. None of that is new. However, it also seems that we as a society are spending more time listening only to people who share our views and vilifying those who don’t.”

Schulz believes there’s nothing inherently wrong with being influenced by parents, siblings, presidents, musicians, athletes or anyone else. The issue, he says, is when you stop listening to everyone else and stop thinking critically about what you hear.

Overall, 62% of consumers say they’re more likely to buy a product or service from a company that shares their beliefs on important political or social issues.

In 2022, more Americans are more willing to cut ties with a favorite retailer. More than half (52%) say they would do so if the company publicly supported a person or cause they disagree with, up from 41% in 2020.

How much money someone has could give them more options to “vote” with their dollars. Those in six-figure-earning households seem to be better able to afford to pay close attention to the beliefs of the companies they shop with — and they’re not afraid to wield their spending power.

Among households with six-figure incomes:

“The fact that the richest Americans are the most likely to boycott is a huge deal,” Schulz says. “The more money you have, the more sway you can have over a business.”

Schulz says the survey findings hint that boycotting is a bit of a luxury.

“It can certainly be easier for higher-income Americans to be choosy with how and where they spend their money, while lower-income Americans may not be able to do the same,” Schulz says. “They’re too concerned about keeping food on the table or building up their emergency funds to worry about making a political statement, even for something they believe in with all their heart.”

Take a look at the following graphic for more income insights: 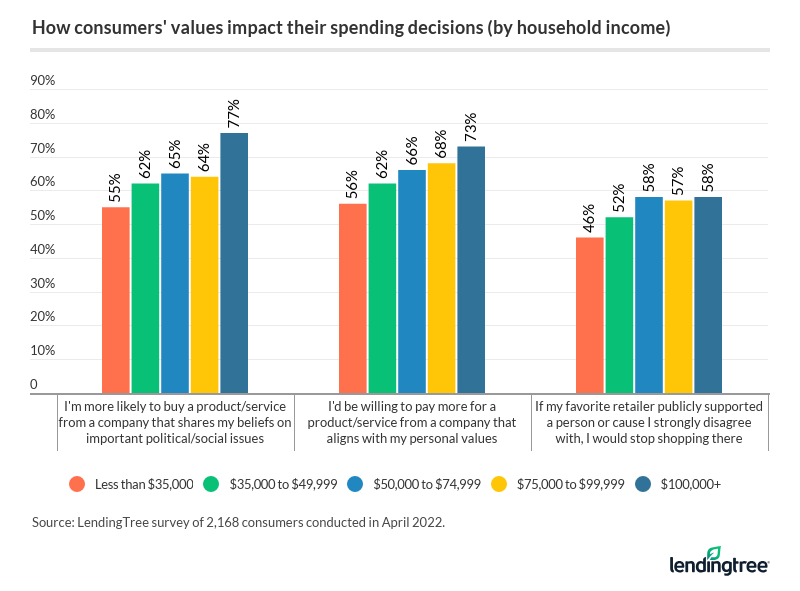 ‘Boycotting is a personal choice that doesn’t work for everyone’

Is boycotting an effective way to bring about change? More than half (58%) of Americans believe so.

All generations feel similarly about this. More than half of each generation — Gen Zers (60%), millennials (58%), Gen Xers (56%) and baby boomers (60%) — all think that boycotting can lead to change.

That being said, each consumer needs to decide individually if boycotting a business is worth it.

“Boycotting is a personal choice that doesn’t work for everyone,” Schulz says. “It’s a great thing when your spending aligns with your values, but the truth is that it won’t always. For example, people shouldn’t feel bad if they simply can’t afford to spend more money to shop with a company whose views they support. Difficult financial times require tough choices.”

Schulz believes the decision to boycott comes down to priorities.

“As you think about whether to boycott, it is important to think not just about your budget, but also about your values and what lines you simply will not cross,” Schulz says. “Then, you can let those choices guide you when choosing whether or not to boycott.”

LendingTree commissioned Qualtrics to conduct an online survey of 2,168 U.S. consumers on April 4-8, 2022. The survey was administered using a nonprobability-based sample, and quotas were used to ensure the sample base represented the overall population. All responses were reviewed by researchers for quality control.