With the third pandemic summer just around the corner, music fans are gearing up for the return of concerts and music festivals. And according to the latest LendingTree survey, attendance is expected to return to pre-pandemic averages this year — with concertgoers ready to shell out dough to make up for lost time.

We surveyed more than 2,000 U.S. consumers about their concert plans and budgets. Keep reading to learn how concertgoers are spending their money and who’s using reward points or miles to pay for their related expenses.

More than a quarter (26%) of Americans say they plan to attend a summer concert or festival, with 12% expecting to do so in the fall. And those numbers are bound to rise, as an additional 29% say they don’t have any firm plans yet, but would still like to attend one this year. 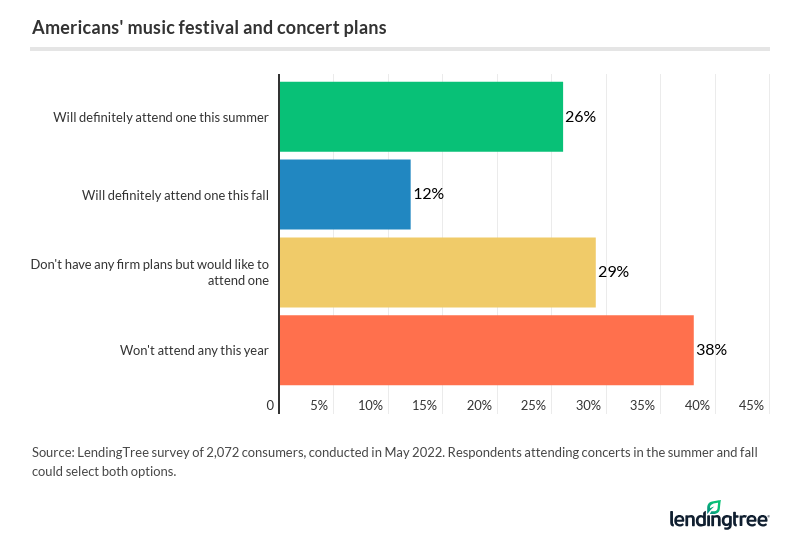 Schedules are notably fuller this year, too. Concertgoers plan to attend an average of four concerts or festivals in 2022, up from last year’s average of three and a return to the pre-pandemic average. Overall, while millennials are slightly more likely to have concert plans this summer, Gen Zers have the most shows on their schedules — they’ll see an average of four shows this year.

Men also have more concerts scheduled than women. On average, men have three shows on their schedules, while women plan to see one.

With spending on the rise, more than a quarter of concertgoers expect to take on debt

Venues might be filling up again, but wallets are looking thinner. While almost half of concert attendees (47%) expect to spend between $100 and $499, nearly a third (32%) plan to spend $500 or more — 10 percentage points higher than pre-pandemic attendees.

Gen Zers are more likely to have higher budgets than any other age group, with 41% planning to spend $500 or more. On the other hand, just 21% of baby boomers ages 57 to 76 plan to do the same, making them the most fiscally conservative age group. While men are also more likely to spend higher than women, the difference is more prominent as the budgets get bigger: 18% of men plan to spend $1,000 or more, versus 11% of women.

“Inflation will hugely affect concertgoers this year,” Schulz says. “It’ll cost more to drive or fly to the show. It’ll cost more to buy merchandise or refreshments at the show. There’s virtually no aspect of the experience that won’t be touched somewhat by inflation.”

More spending isn’t the only difference in concertgoers’ financial plans. This year, more than a quarter of concertgoers (26%) say they’ll likely take on debt this year to offset their concert costs — more than double (12%) the percentage of total respondents who’ve taken on debt for a concert before. Among Gen Zers — the most likely group to take on debt — 41% of concertgoers say they plan on doing so, up from the 21% total who said they have before. Following that, 31% of millennial concertgoers plan to take on debt, but only 18% of respondents in this age range have done it before.

After concerts came to a near-halt at the height of the pandemic, music fans say that taking on debt this year is worth it. The two groups most likely to take on debt are particularly inclined to believe the pandemic justifies their expenses: 25% of Gen Zers and 27% of millennials say they think it’s worth taking on debt to see a show or concert this year, compared with 18% of all concertgoers.

People plan to spend differently, but the top concert costs are generally the same

With spending on the rise, what’s in most concertgoers’ 2022 budgets? Among the most common concert expenses, food and drink rank highest across all demographics — 60% of concertgoers plan to purchase refreshments during their concert or festival experience. 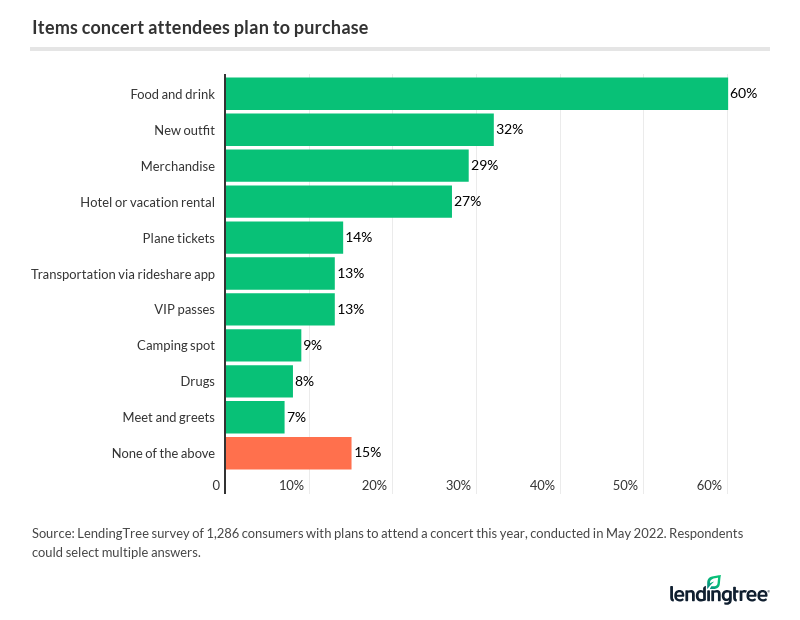 Travel costs are also common, as 27% plan to spend on a hotel or Airbnb and 14% plan to pay for a plane ticket; this comes as about 1 in 3 (30%) concertgoers plan to see at least one show out of state. And with 43% of Gen Zers planning to attend one or more out-of-state concerts — the most of any group surveyed — it’s no surprise that they’re also more likely to purchase plane tickets (23%) and book a hotel or Airbnb (32%).

Consumers are splurging on seats — especially for their favorites

Not only are concertgoers planning to spend more in 2022, but they’re also more willing to shell out extra cash for their seats. Nearly 4 in 10 (38%) concertgoers say they’ll spend more money to get nicer seats than before — and they’re willing to pay up to $328 to see their favorite artists.

Compared to their older counterparts, the two youngest age groups are the most eager to spend more for their spots. Millennials (48%) are more likely to splurge on seats this year than Gen Zers (41%), but the youngest generation says they’re willing to pay the most for their favorites. On average, Gen Zers are willing to shell out $398 for their favorite artists, while millennials say they’ll pay up to $383 on average.

As the music scene heats up for the summer, concertgoers are using their rewards to help offset rising costs. Among those attending a concert, more than 4 in 10 (44%) will cash in on credit card reward points or miles to pay for part of their expenses.

High earners are the most likely to use reward points for their concert costs, with more than half of the two highest income groups — those earning $75,000 to $99,000 and those earning $100,000 or more — reporting they plan to do so. By generation, millennials (52%) and Gen Zers (49%) are the most likely to use rewards well above the percentage of Gen Xers (39%) and baby boomers (33%) who plan to do the same.

Men are also more likely to use credit card rewards than women. Just over half of male concertgoers (51%) report they would; on the other hand, just over a third (37%) of women report similarly.

While concertgoers should be cautious, Schulz says the benefits of using reward points can go a long way.

“Concerts are so expensive these days that every little bit can help, and credit card rewards can help you extend your concert budget in a big way,” Schulz says. “Whether you’re using cash back, saving on fuel with a new gas credit card, getting a free hotel night or redeeming miles for a flight, rewards can save you a lot of money.”

Some consumers don’t discriminate if it means getting a deal

Americans are willing to buy cheap tickets regardless of who’s playing — if they even know. One in 5 (20%) consumers have purchased an “early bird special” ticket for a music festival, which will typically offer lower prices before full lineups are announced. An additional 32% say they haven’t done so, but would consider it.

In general, younger audiences say they’d see any artist if they can get a deal. More than a quarter (28%) of Gen Zers and 24% of millennials say they’ll go to any concert they can get cheap tickets for. On the other hand, just 13% of Gen Xers and 6% of baby boomers feel similarly.

Regardless of whether you’re planning to put more cash toward your concerts this year, nobody likes to overspend. Consider these tips to keep your costs low:

LendingTree commissioned Qualtrics to conduct an online survey of 2,072 U.S. consumers, fielded May 6-10, 2022. The survey was administered using a nonprobability-based sample, and quotas were used to ensure the sample base represented the overall population. All responses were reviewed by researchers for quality control.

According to the latest LendingTree survey, attendance is expected to return to pre-pandemic averages this year.