Despite End-of-Year Bump, Credit Card Openings in Q4 2020 Were Down Nearly 20% From Previous Year

The number of credit card openings jumped 7% between the third and fourth quarters of 2020 — a potential sign of a comeback — though originations were still down 19% from the fourth quarter of 2019.

LendingTree researchers analyzed 100,000 anonymized credit reports to look for trends. We used a separate sample of 1,000 credit reports to find that credit card limits tightened amid the coronavirus pandemic before an upswing in the fourth quarter.

Credit card originations declined steadily once the pandemic took hold in 2020 — hitting rock bottom by the second quarter. But as the initial economic shock of the crisis subsided, new card openings began turning around, most prominently in the third quarter and a bit more in the fourth. 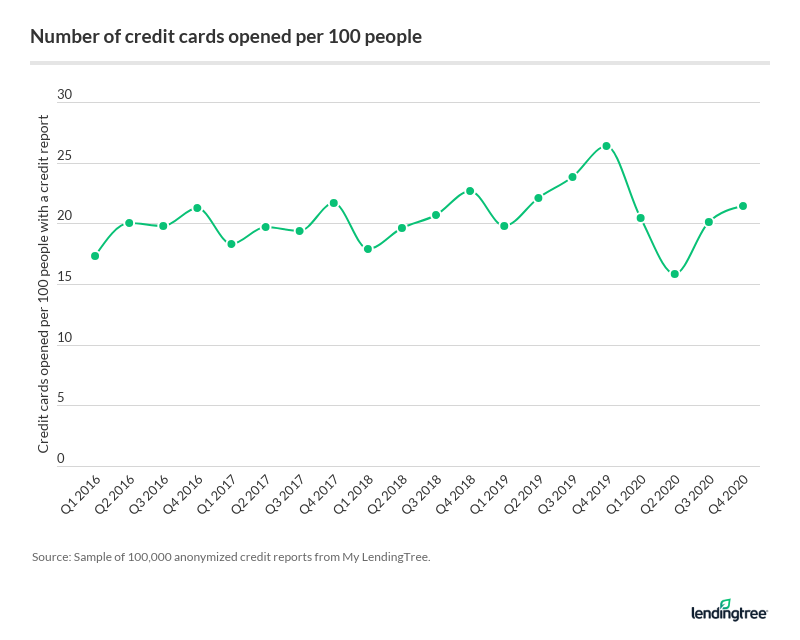 “Credit card openings cratered in the second quarter of 2020, in large part because a huge spike in unemployment meant that millions of Americans had become risky to lend to overnight,” Schulz said. “Banks didn’t know what to do, so they pulled back.”

In addition, issuers had to shift their focus onto their hardship programs rather than acquiring new customers, he added. “That slowly changed as 2020 rolled on, but we’re still not close to where things were before the pandemic began,” Schulz said.

“Once the pandemic is in the rearview mirror, the credit card marketplace could see a boom time like they’ve rarely seen before,” Schulz said. “There’s likely to be an absolute explosion of spending and an arms race to acquire new cardholders.”

While a large group of Americans have been financially devastated by COVID-19, those who are flush with cash and tired of lockdowns will be poised to get back to spending. “I hope that spending boom happens in late 2021, though I suspect much of it may have to wait until 2022,” Schulz said.

Both retail and bank and credit union cards saw year-over-year declines between the fourth quarters of 2019 and 2020, but the latter were the hardest hit. Retail cards saw a more modest drop of 10%.

Store credit cards are typically more friendly to those with thin or damaged credit than bank cards, said Schulz, and people who were hurting financially may have sought these products as a lifeline.

“Store-branded cards are frequently offered to those with imperfect credit,” he said. “The issuers of these cards were already comfortable with a fairly high level of risk, so they saw no reason to pull back.”

Should you apply for a credit card amid the coronavirus pandemic?

It’s fine to apply for credit during the pandemic, Schulz said. What you don’t want to do, however, is use that new credit as an excuse to go on a spending spree: “The last thing you need in volatile economic times is to spend money unnecessarily.”

For those struggling with existing card debt, it pays to reach out to your creditor to discuss their credit card relief programs.

“You don’t need excellent credit to get help from your card issuer,” Schulz said. “Millions of Americans, including folks from all along the credit spectrum, have been helped by banks’ hardship programs.”

Just be mindful that it’s up to you to take the proactive step to ask for help.

A look at 1,000 My LendingTree credit reports found that the end of 2020 saw a rise in average credit limits from the end of 2019.

What’s noteworthy is that credit limits were the highest in the fourth quarter of 2020, versus the first quarter in every other year since 2016. This anomaly further illustrates the impact that the trajectory of the pandemic had on the credit card industry.

“Millions of Americans had their credit limits slashed or had cards closed altogether as banks scrambled to shrink their risk in the early and middle parts of the year,” Schulz said. 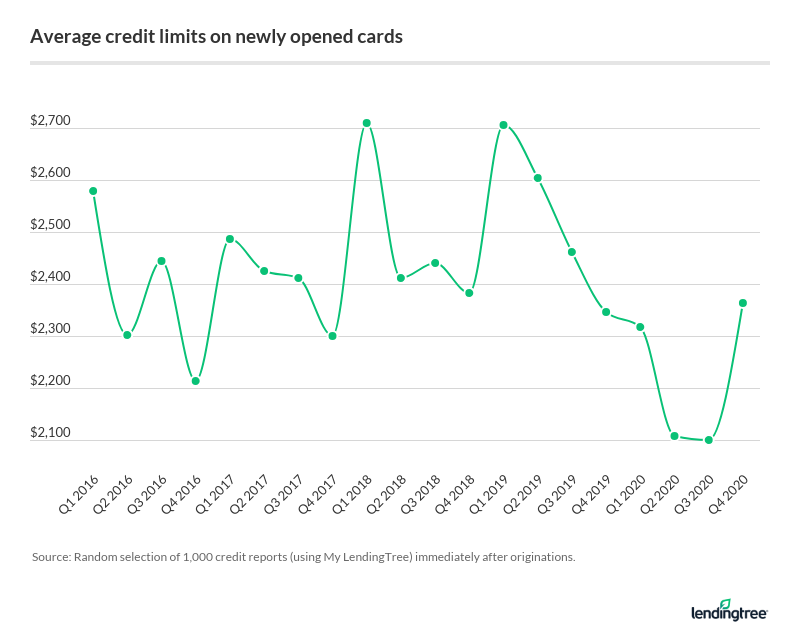 However, some people might have been given an increase as part of a hardship program from a card issuer, or simply because they felt more confident and financially secure at the end of the year and asked their issuer for one.

“As the economy recovers, I’d expect credit limits to rise significantly,” Schulz said. “Banks aren’t going to want to do anything to keep their best customers from going on that post-COVID splurge that many are planning.”

What to do when your credit limit increase is denied

Anyone can ask for a credit limit increase, but that doesn’t mean your issuer will always say yes. If you’re denied, you can try one of these tactics:

Analysts used a random sample of 100,000 anonymized credit reports from My LendingTree to count the number of credit cards that originated per quarter from 2016 through 2020. Additionally, we randomly selected 1,000 credit reports immediately after originations in the same periods to calculate average credit limits.