One Year After the Equifax Breach, 9 in 10 Americans Stepped Up Fight Against Identity Theft

In the year since the announcement of the Equifax data breach, which exposed the personal information of some 148 million Americans, 91% of consumers said they took some sort of action to protect themselves from identity theft, according to a new survey from LendingTree.

Equifax publicly announced the data breach on September 7, 2017. As the one-year anniversary of that announcement neared, LendingTree commissioned Qualtrics to ask 1,037 Americans with a credit card or debit card if they had taken any of 10 actions aimed at detecting, preventing or protecting themselves from identity theft. More than 9 out of 10 respondents said they had done at least one, and the average respondent had done three.

The most common actions taken were:

“People have clearly been spurred to action, and that’s great news,” said Matt Schulz, chief credit analyst for LendingTree. “Whether they’re reacting to the Equifax breach or any of the other myriad data breaches we’ve seen recently, Americans are taking concrete steps to protect themselves and their money.” 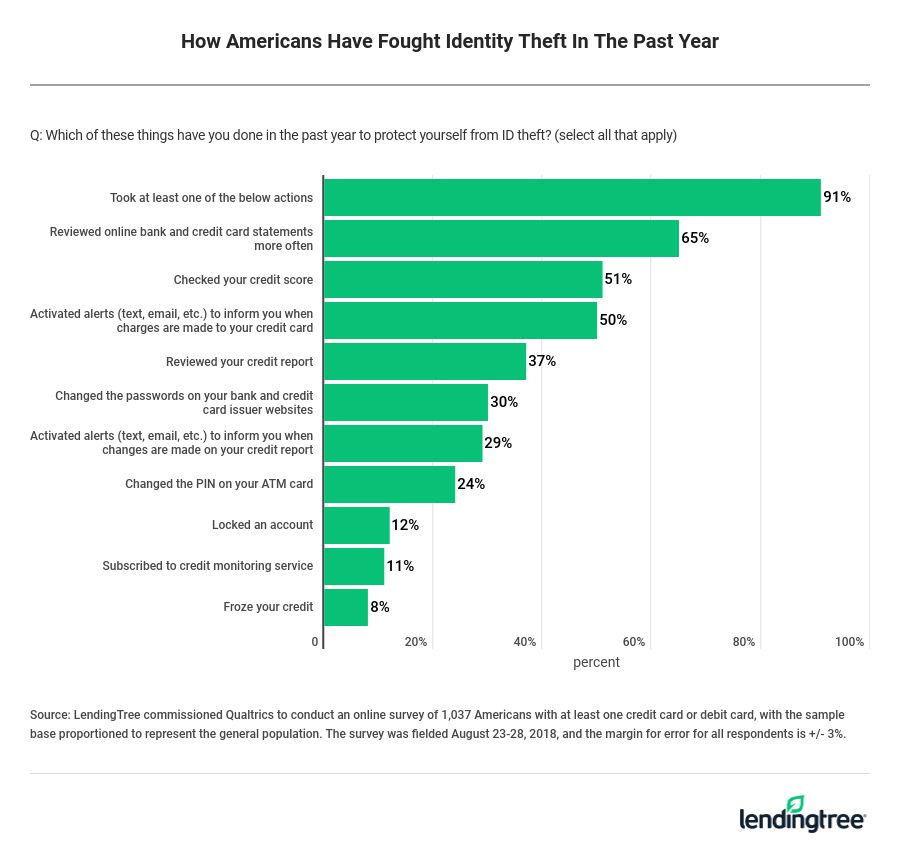 More than 8 in 10 Americans (81%) said they are being more diligent about looking for signs of identity theft than they were a year ago. That includes 41% who are being “much more” diligent. Those most likely to say they’re much more diligent include parents with children under 18 and consumers with household incomes at least $100,000.

Two-thirds of respondents (67%) said they always check their credit card and bank statements every month to make sure that the charges are accurate. Older and more educated Americans are generally more likely to say they do so. On the other hand, 13% of those who make less than $25,000 said they never check their bank and credit card statements — that’s at least triple the percentage seen for any other income level. 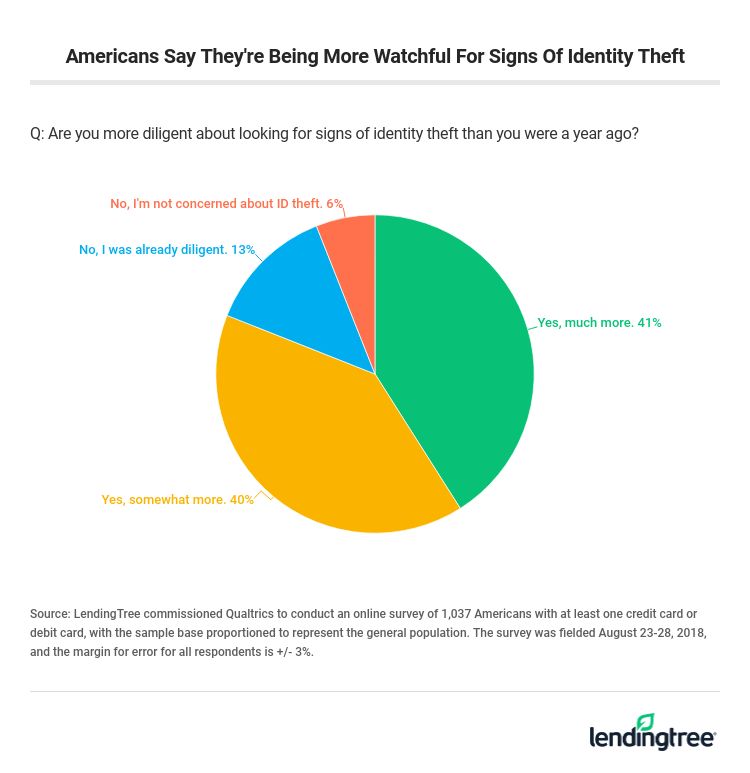 “That’s troubling,” Schulz said. “Lower-income folks have so little margin for error that even the smallest mistake or fraud can make a really big difference.”

Despite all of the actions being taken against fraud, it’s also clear that the next big breach might not be as impactful. More than half of Americans (52%) say they’re less bothered by data breaches now because they assume their information is already out there. 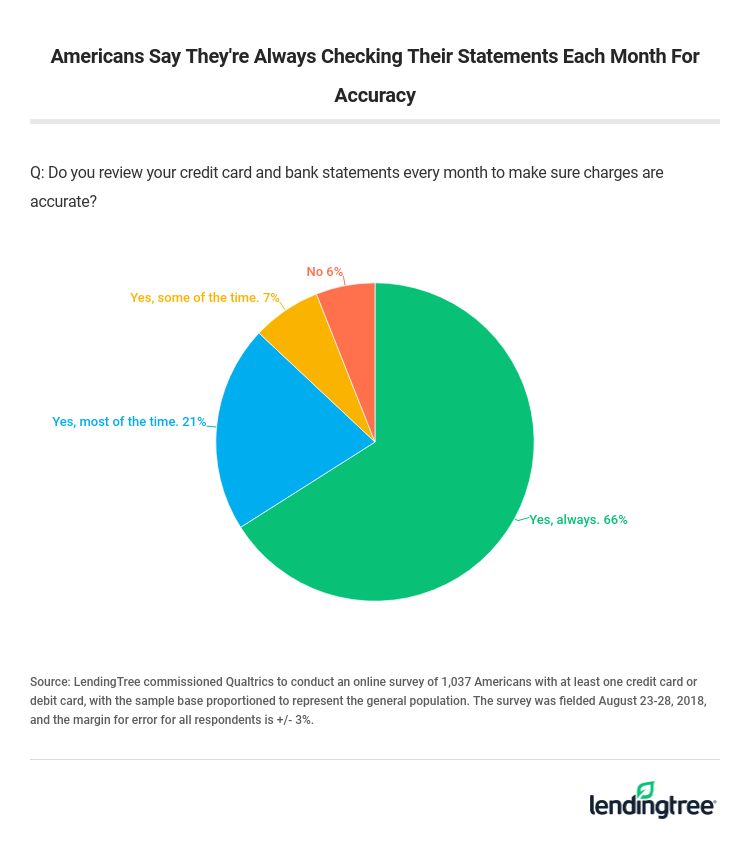 Other key findings include:

Tips for dealing with identity theft and data breaches

You should make it a habit to review your bank account information often so you verify your information is accurate and detect potential fraud early. Schulz recommends checking your online bank and credit card statements once a week, checking your credit score once a month and reviewing your credit report from all three credit bureaus at least once a year. The latter can be done for free via annualcreditreport.com. These actions don’t take very long, but they’re very important.

A credit lock vs. a credit freeze:

A credit lock puts you in primary control of your credit report. You decide when to lock or unlock your report with a simple tap, click or swipe via the credit bureaus’ app or website. And, a credit lock is free to use for two of the three bureaus — Equifax and TransUnion.

That’s in comparison with a credit freeze, where you receive a PIN that is necessary to lift or remove your freeze. Currently, freezes may cost you each time you temporarily lift or permanently remove your freeze, depending on your state. However, beginning September 21, 2018, a new law takes effect that makes all credit freezes free. As of now, Experian is the only bureau to charge for access to their credit lock service, but they do not charge to place, lift or remove credit freezes.

It’s also key to note that credit freezes are mandated by law — they have to be available to consumers, while credit locks do not. As a result, if something goes wrong, a freeze may provide more recourse than a lock.

Ultimately, the decision to lock or freeze your credit is up to you, but we recommend sticking with a credit lock since it’s a more convenient way to safeguard your data than a credit freeze and you can easily control your credit in real time without a PIN.

Here’s how to lock your credit report and the cost (if any):

Here’s how to freeze your credit report and the cost (if any):

Take note: While a credit lock or freeze can make it harder for fraudsters to open new accounts, it doesn’t protect against all types of fraud.

If you see something, say something

If you spot a charge on your account that doesn’t look right, call your credit card issuer and if you see a new account on your credit report that you didn’t authorize, report it to a credit bureau. “Don’t wait. Quick action can head off other issues,” Schulz said.

Don’t let your guard down

Bad guys are smart, and they can be patient. Schulz stated, “Just because a breach recedes from the headline and you haven’t had any incidents, that doesn’t mean that you’re in the clear. Once your information is out there, it’s out there forever.” Therefore, you should continue to review your account information regularly, whether there was a recent breach or not. 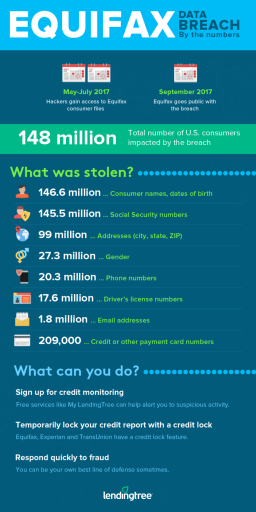 LendingTree commissioned Qualtrics to conduct an online survey of 1,037 Americans with at least one credit card or debit card, with the sample base proportioned to represent the general population. The survey was fielded August 23-28, 2018 and the margin for error for all respondents is +/- 3%.

One Year After the Equifax Breach, 9 in 10 Americans Stepped Up Fight Against Identity Theft

In the year since the announcement of the Equifax data breach, which exposed the personal information of some 148 million Americans, 91% of consumers said they…