Nearly Half of Consumers Have Holiday Gift-Giving Guilt

The holiday spirit spurred a record number of American shoppers to open their wallets this holiday season. According to the National Retail Federation and Prosper Insights & Analytics, 189.6 million U.S. consumers shopped from Thanksgiving to Cyber Monday, and spending was up 16% compared to the same time period in 2018. Yet, despite their generosity, almost half of shoppers felt some kind of guilt about their gift-giving, according to a new report from LendingTree.

We’ll break down why shoppers felt guilty about gifts they gave or received, what to do if you’re experiencing post-holiday shopping regret and ways to plan ahead for the next holiday season. 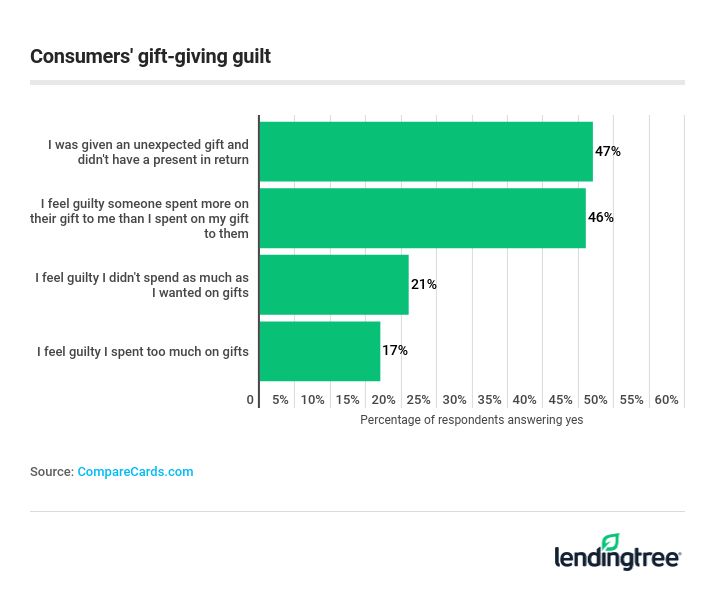 Unexpected gifts, spending too much, led to guilty feelings

If you feel like holiday shopping is a chore that must be ticked off your to-do list, you’ve got plenty of company. But it’s worth trying to slow down and be strategic about it to avoid falling into the regret trap.

According to the survey, nearly 70% of consumers reported having at least one holiday shopping money regret, ranging from not being able to spend enough on gifts to succumbing to impulse shopping or overspending.

These are the top regrets that weighed on holiday shoppers this season:

“The holidays are stressful,” said Matt Schulz, chief credit analyst at LendingTree. “Shopping during that time can be a frenetic mess, and many, many people just power through to get it over with, only to wish in the end that they’d taken a more thoughtful approach.”

Millennials report having the most gift guilt

The good news is that 62% of consumers surveyed this holiday season said they were satisfied with the amount of money they spent on gifts. However, among those who did feel remorse, millennials took the lead. Some felt bad about spending too much on gifts (about 24%) and some felt regret over not spending as much on gifts as they would have liked (about 26%). Given the financial burdens facing this generation, not having enough to spend on gifts could be a contributing factor.

Almost 1 in 4 shoppers made holiday purchases while drunk

If you drink and shop, your head might not be the only thing hurting the next day. Out of all survey respondents, 23% said they had made a purchase this holiday season while drunk either “once or twice” or “many times.” Shoppers in the Gen X and millennial age groups were the most likely to make purchases while intoxicated, with about 32% of the first group and 31% of the latter group admitting to having done so.

To keep your spending under control during the holidays, you need to stick to a plan. And it’s no secret you’re less likely to do that if you’re shopping under the influence of alcohol.

“[Consumers] should create a reasonable budget for their spending, as far in advance as possible,” said Martin Lynch, compliance manager and director of education at Cambridge Credit Counseling. “Creating a holiday budget in August or September makes it easy to approach the spending process more thoughtfully, especially if the goal is to focus on avoiding spending more than you can afford.”

If you tend to go over budget, putting down the credit card might help.

“Some consumers find that making all of their purchases in cash helps them appreciate the true costs they’re incurring, and that keeps their spending in check,” Lynch said. 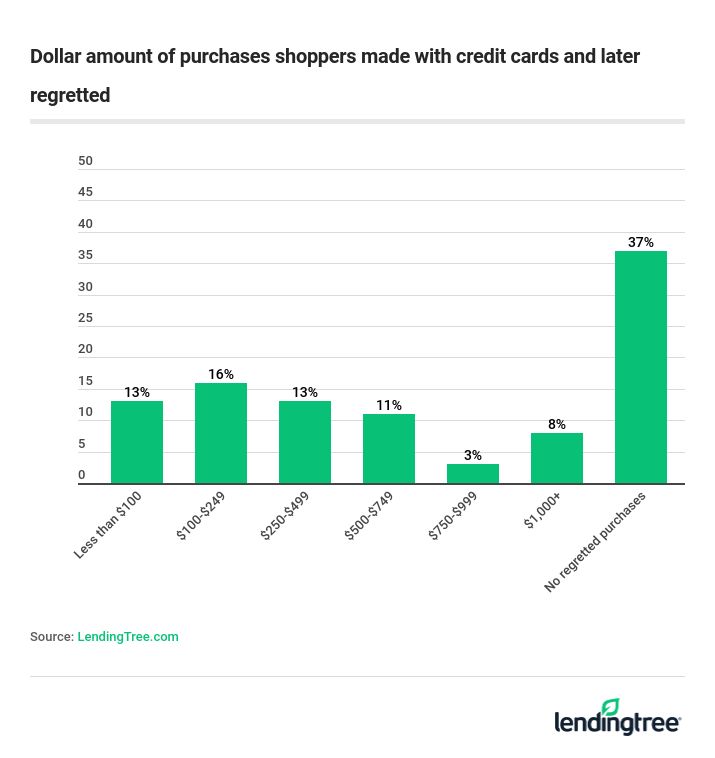 How to cope with post-holiday shopping guilt

If you find yourself with some post-holiday shopping guilt, don’t let it drag you down.

“What happened has happened, and what’s important now is how you handle it,” Schulz said.

If you’ve taken on credit card debt or spent too much, helpful steps include:

If you’re worried about both paying off debt and rebuilding your savings, a good first step is to focus on creating or maintaining an emergency fund so you can cover unexpected expenses without going deeper into debt. Once you have that built up, you can then focus on repaying debt in larger chunks before contributing more to savings.

Planning ahead, sticking to a budget and talking with family members to set expectations are all important parts of making your holiday shopping a successful experience. One way to try to get family and friends on board is to establish a tradition which can be both fun and cost-efficient.

“I come from a large family [with] five brothers and sisters, and we now have many nieces and nephews,” Lynch said. “Several years ago, we started drawing names from a hat. We were pretty open about the fact that our growing extended family was one day going to overcome our budgets, so the decision to draw names was easy for us.”

It’s also smart to start saving far in advance. You may want to think about opening a separate savings account earmarked solely for holiday gifts. Setting up a biweekly or monthly automatic transfer for a reasonable amount each month can help you save up over time.

Money can be a stressful topic at any time of the year, and especially so during the holidays. If you don’t want to end up feeling regret about your holiday shopping, creating a budget early in the year, setting aside money each month, and working with family members to make sure everyone is on the same page can reduce your stress and increase your holiday cheer.

And if you already feel guilty about the shopping you did for the holidays that have just passed, take those feelings and turn them into positive behavior for the year to come.

“Ultimately, overspending is a little like breaking a diet,” Schulz said. “It happens. People aren’t perfect. The key is making sure that it doesn’t happen to too big a degree too often.”

LendingTree commissioned Qualtrics to conduct an online survey of 1,120 Americans. The survey was fielded from Dec. 20-23, 2019.

Nearly Half of Consumers Have Holiday Gift-Giving Guilt

The holiday spirit spurred a record number of American shoppers to open their wallets this holiday season. According to the National Retail Federation and…