Holiday Blessed or Stressed? 56% of Gift-Givers Are Feeling the Pressure This Season, With Parents, Millennials and Women Topping the List

As the holidays approach, many Americans are feeling like their wallets are stretched thin. If costly Thanksgivings weren’t enough to stress consumers, more than half (56%) of those planning to give a holiday gift say they’re worried about it — with affordability as the No. 1 reason for stress.

We asked more than 2,000 U.S. consumers about their gift-giving stressors — here’s what we found.

Majority of Americans plan to give a holiday gift, but most are stressed about it

This year, 81% of Americans plan to give a gift for the holidays. It may be worth reaching out to your well-off aunt or uncle this year, as six-figure earners (89%) are the most likely to give a holiday gift. Parents with children younger than 18 are also high on the list at 84%.

On the other hand, inflation may be cutting into low-earning consumers’ holiday budgets. Those earning less than $35,000 are the least likely to give a holiday gift: Just 71% of this demographic is participating in gift-giving this year — 18 percentage points lower than six-figure earners. Those without children are also less inclined to give a gift, at 78%.

Lack of affordability is the leading cause of gift-giving stress

Cash is tight this year, and fulfilling your gift-giving responsibilities may be a little more difficult. In fact, for those giving a gift this year, their top concern is not being able to afford presents (28%). 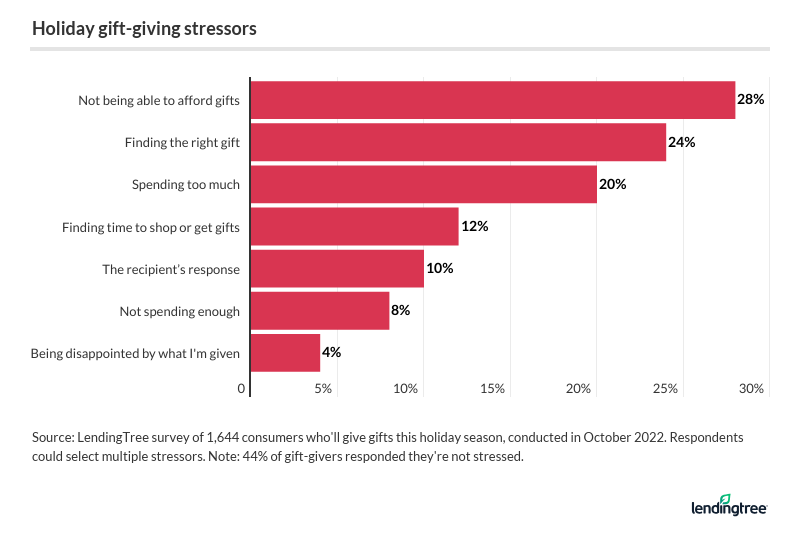 According to LendingTree chief credit analyst Matt Schulz, inflation is to blame for those struggling to afford a gift.

“The truth is that your holiday spending dollar won’t go nearly as far this year as it did last year,” Schulz says. “That means that if you haven’t increased your holiday spending budget — and unfortunately, many Americans simply can’t — you’re going to have to make some sacrifices. One of those sacrifices might just be giving fewer gifts this season.”

Across demographics, women (37%) are most likely to cite an inability to afford gifts, though parents with young children (35%) aren’t far behind.

Most gift-givers don’t feel pressure from others, but some feel it from family

You’re not alone if you’ve ever felt the pressure to give a gift: Most givers say they haven’t felt gift pressure from outside sources this year (68%), but nearly a third (32%) say they feel it from family and/or friends. 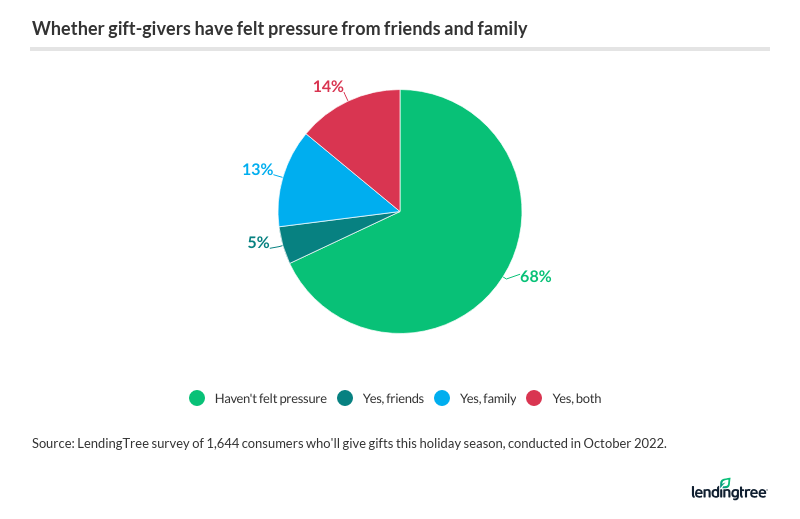 “A budget helps reduce your gift-giving stress by allowing you more control,” he says. “It can help you know exactly how much you can afford to spend on gifts this holiday, and if you end up still going a little overboard with gift shopping, it can show you places where you can trim your expenses to make up for it. That’s a big deal. It’s far, far better than flying blind and hoping for the best.”

Meanwhile, 21% of gifters are reducing stress by giving gift cards this year, with baby boomers (ages 57 to 76) (27%) the most likely group to do so. Following that, 17% are making wish lists — that method is most common among women and Gen Zers, at 19% for both.

Gift-givers are also reducing stress by:

Looking at what givers like receiving might shed some light on what the best gifts may be. Responses indicate that they might be trying a little too hard to find the right gift, as 27% of gifters prefer to receive cash. Other popular answers don’t involve personalized material gifts: 16% would rather have gift cards, while 14% prefer experiences.

When it comes to who these givers expect gifts from, 31% expect their significant others to spend the most on gifts for them this holiday season — particularly married respondents (45%) and six-figure earners (41%). Meanwhile, 24% expect their children to shell out the most for them, a figure that’s highest among parents with adult children (42%) and baby boomers (40%).

Although many may feel stressed about giving this year, 83% of givers say it makes them feel good to give — regardless of what they get in return. 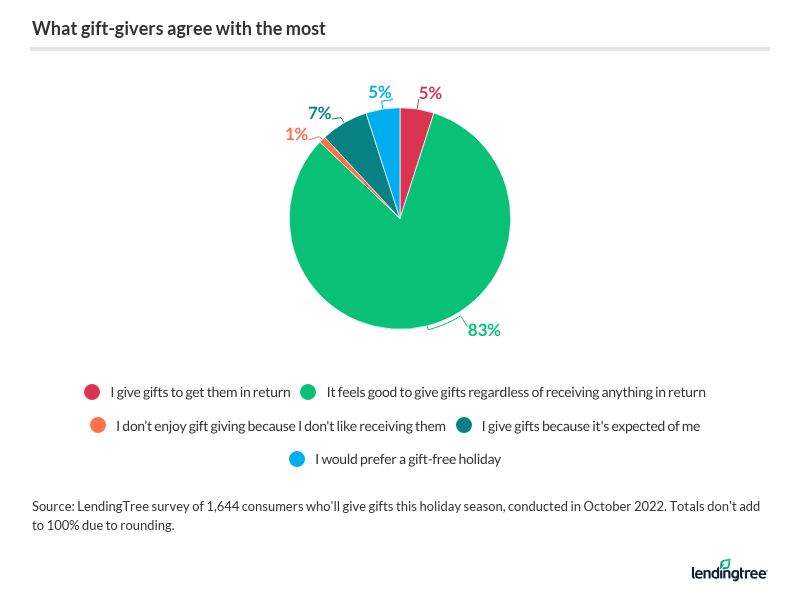 Meanwhile, 7% give gifts because it’s expected of them. The next popular responses? Gifters are equally likely to say they prefer a gift-free holiday and give a gift to receive one in return, at 5% for both. Gen Zers are the most likely group to give gifts in order to get them, at 11%.

If you’re among the consumers stressed about gift-giving this year, Schulz says that credit cards can help ease your financial burden — so long as you use them right. Particularly, he recommends:

READ MORE
Nearly Half of Consumers Have Holiday Gift-Giving Guilt

The holiday spirit spurred a record number of American shoppers to open their wallets this holiday season. According to the National Retail Federation and…