Another Thanksgiving approaches. Although life has relatively returned to normal, many consumers may struggle to feel the holiday spirit. As inflation remains high, only 26% of Americans expect to host Thanksgiving this year — a four-year low — according to the newest LendingTree survey.

We asked more than 1,500 U.S. consumers about their Thanksgiving plans. Keep reading to learn how much money potential hosts plan to put toward their Turkey Day celebration and who’s feeling financial strain this holiday.

Only 26% of Americans plan to host Thanksgiving this year

Still, consumers have time to lock in Thanksgiving plans, so those figures aren’t set in stone. While 41% say they aren’t hosting Thanksgiving, 33% say they might — which could significantly boost the percentage of hosts. 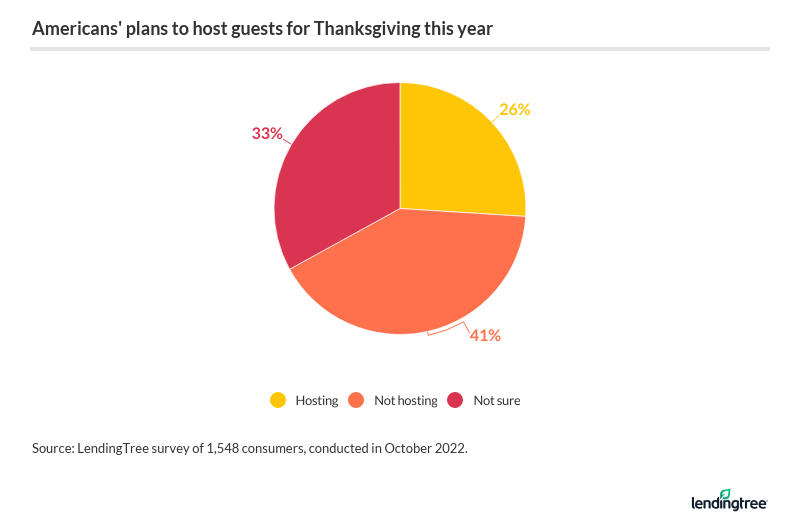 More than half say inflation is impacting their holiday plans

Regardless of whether they’re hosting Turkey Day, 56% of Americans say inflation is affecting their Thanksgiving plans or budget. Parents with children younger than 18 (67%), millennials (65%) and those making less than $35,000 (61%) are the most likely to feel this way, while baby boomers (42%), six-figure earners (47%) and parents with adult children (48%) are the least likely.

Consumers are most likely to say they’re couponing more this time (27%), but they’re also likely to change food choices (23%). Though the question went to all respondents rather than those planning to host, 16% also say they plan to cut back on the number of guests at the dinner table. 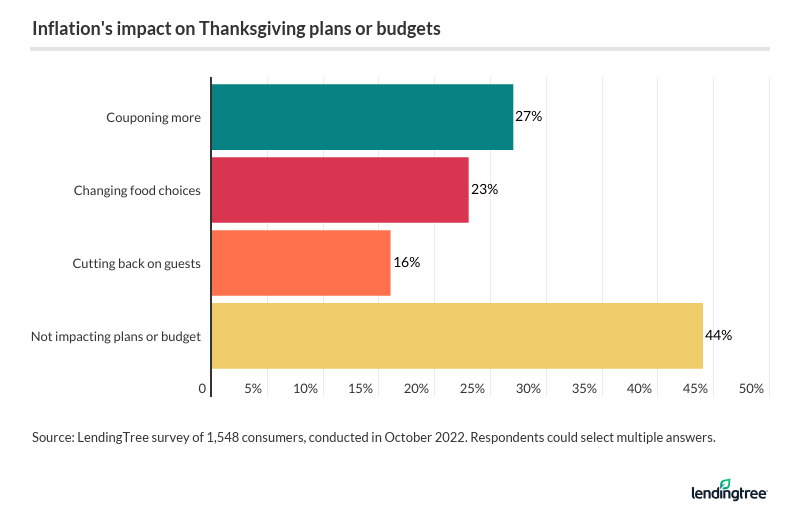 It’s easy to understand why potential hosts are looking to cut costs: They expect to spend an average of $267 on food and drink and $129 on new housewares for Thanksgiving. Notably, men plan to spend more on average on Thanksgiving food and beverages ($306) than women ($228).

Regardless of what they’re prioritizing, potential hosts plan to spend an average of $396 in total, though some groups are more likely to shell out than others. Particularly, six-figure earners plan to spend the most. At an average of $527, they’re the only demographic group to spend above the $500 mark. Following that, parents with kids younger than 18 ($500) and Gen Zers ($498) expect to be big spenders this Turkey Day.

But in spite of these expected costs, 57% of hosts say they have a flexible budget. That leaves 23% who’ll pay whatever they need and 20% that say they have a strict budget.

Thanksgiving food costs are on the rise

Rising food costs have been a common pain point for consumers throughout the year, and potential hosts are particularly likely to feel it in their wallets during the holiday. Overall, consumers can expect to spend 17.5% more on a typical Thanksgiving grocery list.

Your mashed and scalloped potatoes come at a particularly hefty price hike, with the cost of Russet potatoes up by 45.5% and red potatoes up by 38.2% compared to last year. And it wouldn’t be Turkey Day without the turkey, either — this year, you can expect to pay 6.5% more per pound of frozen turkey than last year.

Changes to the average retail prices for popular Thanksgiving foods

These higher food costs notably impact potential hosts’ budgets, especially as they expect to serve dinner for an average of nine guests.

Potential Gen Z hosts, in particular, can expect to shell out — they plan to have the fullest dining rooms, with an average of 12 people attending. Six-figure earners are the only other demographic with an average number of guests in the double digits, seating an average of 10 people this year.

Over a quarter of consumers say Thanksgiving is a financial strain

Regardless of whether they’re hosting or attending the feast, just over a quarter (26%) of consumers say Thanksgiving spending is a financial strain. Across demographics, parents with kids younger than 18 (37%), those with an annual household income of less than $35,000 (34%) and millennials (34%) are most likely to feel the stress.

Potential hosts will likely rely on credit cards to ease the financial burden. This year, 25% of potential hosts plan to use a credit card to cover at least some of their Thanksgiving expenses. 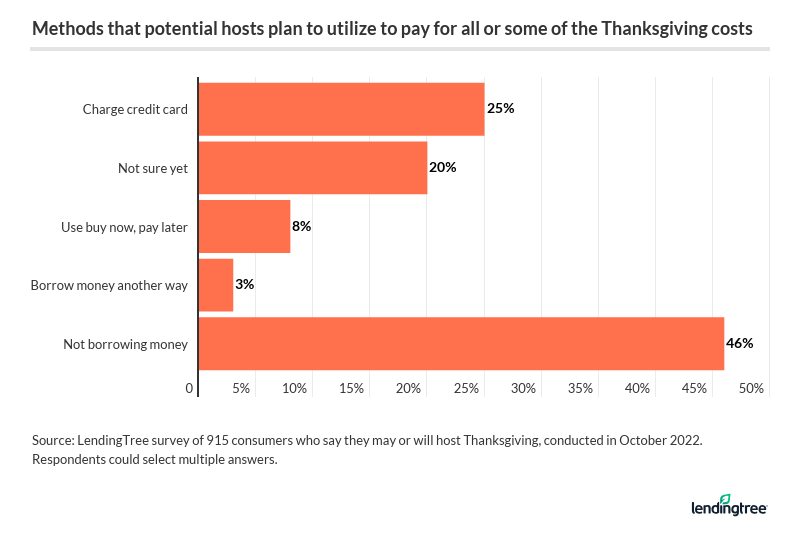 However, it might be a problem when it comes time to pay the bills, as 42% of hosts who’re paying with their credit cards don’t expect they’ll pay off their debt in one billing cycle. To break it down:

LendingTree chief credit analyst Matt Schulz says rising costs could be to blame for the hefty amounts of debt that consumers expect to put on their cards.

“It’s not just the turkey, the decorations or the gas to drive to see your parents,” he says. “It’s all of it. That makes for a really big challenge for the average family who is already having to work harder to make ends meet because of rampant inflation.”

Potential hosts don’t shoulder all the financial stress, though. In fact, they hope their guests share the burden, as 63% of them think some of their guests will either offer money or bring food and beverages to offset the cost of hosting.

With an arguably hefty financial burden this holiday season, some potential hosts are already regretting their decisions. Overall, 11% say they regret hosting already, while 16% aren’t sure. Six-figure earners and parents with kids younger than 18 are the most likely to regret their decision to host (both 16%). That’s followed closely by millennials and Gen Zers (both 15%). 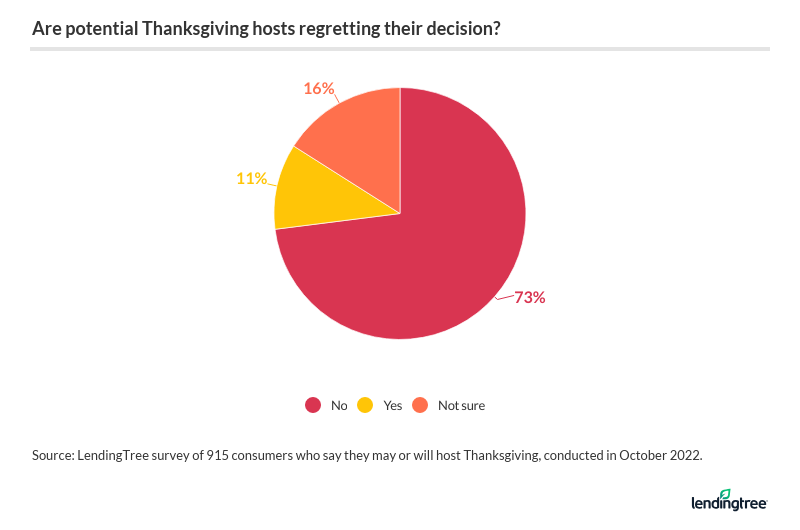 This Thanksgiving may be a financially stressful time for many, but just because costs are higher this year doesn’t mean you have to forgo the festivities entirely. To celebrate Turkey Day without taking on an unmanageable financial burden, Schulz recommends the following:

LendingTree commissioned Qualtrics to conduct an online survey of 1,548 U.S. consumers ages 18 to 76 from Oct. 5 to 6, 2022. The survey was administered using a nonprobability-based sample, and quotas were used to ensure the sample base represented the overall population. All responses were reviewed by researchers for quality control.

Despite widely reported price increases, hosts are still planning to spend an average of just under $400 — though that’s 18% less, on average, than last year.

READ MORE
Thanksgiving Spending Up 53% in 2020, Despite Smaller Gatherings During Coronavirus Pandemic

This year, Thanksgiving gatherings will be slightly smaller, perhaps due to the coronavirus pandemic. Hosts also plan to spend 53% more than in 2019, a LendingTree survey found.

READ MORE
Thanksgiving Hosts to Spend $300+ This Year, While Most Guests Won’t Pitch In

Despite spending over $300 this year on Thanksgiving, few hosts will receive financial help from guests. That’s according to a new survey from LendingTree.