64% of Cardholders Say Inflation Is One of Their Biggest Money Concerns, and It’s Forcing Them to Rely More on Plastic

As prices for groceries, gas and everything else continue to rise with inflation, nearly two-thirds of Americans say they’ve been turning to credit cards to make ends meet — that’s according to a recent LendingTree survey of more than 1,200 credit cardholders about inflation’s impact on their wallets.

“Many Americans already had a razor-thin financial margin for error,” says Matt Schulz, LendingTree chief credit analyst. “But now, thanks to skyrocketing inflation, any wiggle room that those families had in their budget might just be gone.”

More than 8 in 10 Americans reported inflation has had a negative impact on their monthly budgets and expenses, and 56% said they wouldn’t be able to get by if it wasn’t for their credit cards.

When you factor in interest rate hikes, more consumers may be heading toward a credit card debt spiral. Find out which demographics are struggling the most, along with money management tips to help you navigate through this inflationary period.

The majority of people (64%) are worried about inflation slashing their budget; more than a quarter said inflation is their single-biggest concern. 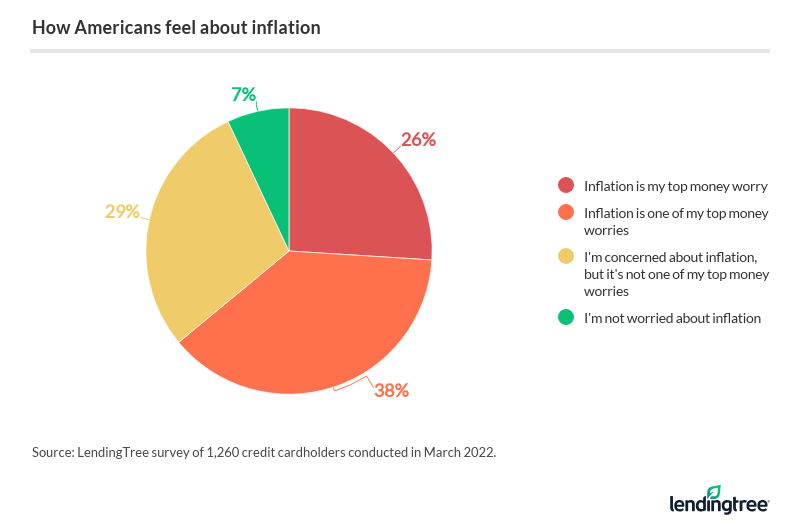 Baby boomers are more worried about inflation than any other generation, with 67% saying it’s a top concern, followed by millennials at 66%.

“A large number of boomers are on fixed incomes, or will be in the near future, so any increase in inflation hits them particularly hard,” says Schulz. As for millennials, he called this economic climate “yet another gut punch” to a demographic that may have young families, or otherwise be in “one of the most expensive times of their lives” — “it’s keeping them from growing any sort of financial cushion.”

“The highest-income Americans are more likely to have savings and investments to draw on in difficult financial times. They’re less likely to sweat a few extra dollars spent at the grocery store or at the pump,” says Schulz.

Paying a bit more here and there is adding up to financial frustration for most people, with 83% of respondents reporting negative impacts of inflation on their monthly budgets and expenses. Among baby boomers, many of whom are on a fixed income, that percentage rises to 90%.

When asked to pick which prices they’ve noticed increasing most, these were the top three choices identified by consumers:

For many, the persistent pain at the pump and more expensive household necessities has them turning to plastic.

More than half rely on credit to cover monthly expenses

With higher costs and stagnant income, 56% of consumers said their reliance on credit cards has increased. (Reliance is defined as them not having enough money in their bank account to afford their purchases otherwise.)

Of that group, 23% are using credit to cover their basic necessary expenses like food or housing, while 33% are paying for their extras, like dining out or entertainment, with plastic. 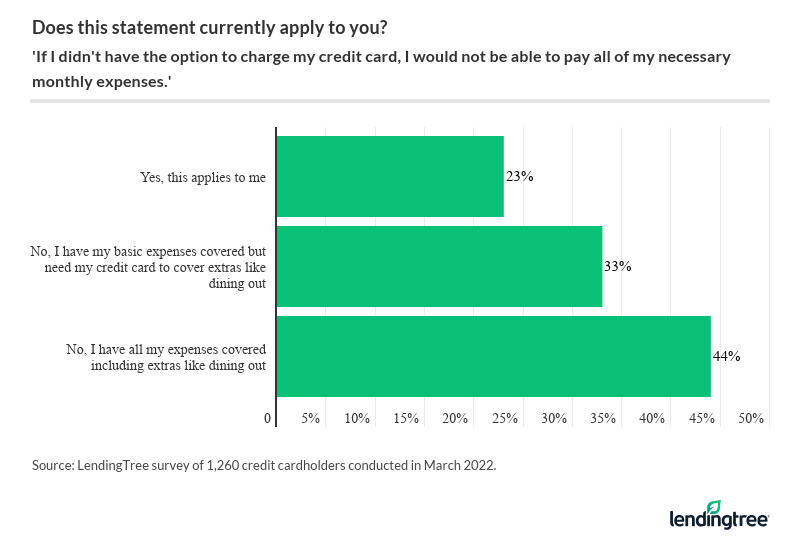 “Regardless of why you are relying on credit cards, it is important that your budget reflects your priorities,” says Schulz. For those simply trying to keep the lights on and put food on the table, those priorities are really straightforward, he added. But if you’re relying on your cards for fun extras, it can be a little more complicated. “In either case, having a budget is a must,” says Schulz.

Some groups, including 68% of Gen Zers and 66% of millennials, as well as 64% of parents with kids younger than 18, are relying on credit cards more than others.

As for the top 5 areas where cardholders rely on credit cards the most, fun is the biggest category, but the next four involve basic needs:

Compared to last year, 28% of cardholders said their reliance on credit has become more prevalent. That percentage rises among some groups, too, including 36% of those making less than $35,000, 35% of millennials and 33% of parents of young kids.

“Raising a kid has always been crazy-expensive, and inflation is making things far worse,” says Schulz. “That has forced even more parents than usual to lean on credit cards to get by, and that can spell trouble down the road.”

About 1 in 2 cardholders are in credit card debt

Just over half of cardholders in the survey (53%) said they are currently carrying a balance on their credit cards, up slightly from 50% this time last year — with most people blaming inflation for their debt. Gen Xers have a higher percentage in debt (64%), however, as well as by parents with young kids (63%). 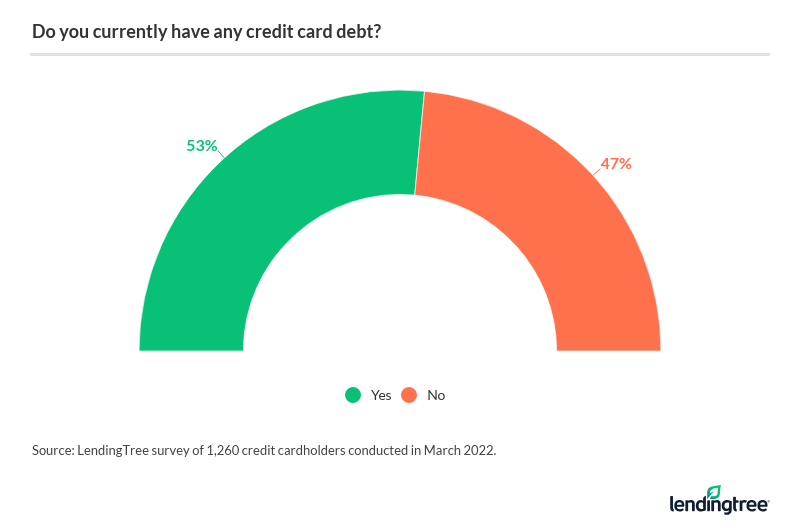 Some consumers are using up their entire available credit limit, too, with 31% of cardholders maxing out several times per year. Gen Zers are most likely to hit their card’s spending limit (51% do so multiple times a year), as are parents of young children (42%). Maxing out cards can hurt your credit utilization (the percentage of available credit you are using) — the higher your utilization, the bigger the negative impact on your credit score.

Unfortunately, inflation plus existing credit card debt can create a vicious debt cycle. For example, of those relying on their cards for monthly expenses, 71% are already in debt compared to 39% who are not. Also worth noting: One-third of the indebted cardholder group wouldn’t be able to pay for basic expenses like food and housing if they didn’t use their cards.

“The cycle of debt is so hard to break,” says Schulz. “If you’re constantly relying on credit cards to make ends meet, there’s just no opportunity to build savings and give your family a little bit of breathing room. Then, when you factor in that credit card interest rates are rising, too, and those increases are only likely to accelerate in the coming weeks and months, it makes for a very, very difficult situation.”

Inflation is complicating things for people living paycheck-to-paycheck already. Here are a few strategies that can offer some temporary relief.

LendingTree commissioned Qualtrics to conduct an online survey of 1,260 credit cardholders, conducted March 10-15,  2022. The survey was administered using a nonprobability-based sample, and quotas were used to ensure the sample base represented the overall population. All responses were reviewed by researchers for quality control.

64% of Cardholders Say Inflation Is One of Their Biggest Money Concerns, and It’s Forcing Them to Rely More on Plastic

As prices for groceries and gas continue to rise with inflation, nearly two-thirds of Americans say they’ve been turning to credit cards to make ends meet.