Thinking of asking your credit card issuer to lower your interest rate or waive an annual fee? Your chances of success aren’t at the stratospheric levels seen in previous years, according to a new report from LendingTree, but they’re still high enough to make it well worth making the call.

For the fourth straight year, LendingTree asked credit cardholders whether they’d asked their card issuers for certain breaks, including a lower APR, a waived annual fee and a waived late fee. What we found was that while some requests, such as a waived balance transfer fee or a later payment due date, were more likely to be granted, others — such as a lower APR or a waived annual fee — were less likely to be successful than if they asked last year.

So while your chances of getting your credit card’s APR reduced are the lowest they’ve been in four years, it is still very likely to happen if you ask. Seven in 10 cardholders who asked for a reduction got their way. The success rate was even higher for the three other issuer requests, hitting 80% or higher. In a time of skyrocketing inflation, rising interest rates and general economic uncertainty, that is definitely something cardholders should take advantage of.

What is less clear is whether these lower success rates are a blip or the start of a trend. Either way, cardholders who could benefit from one of these breaks would be well served to ask for them sooner rather than later.

Requests for a lower APR, waived annual fee or late fee less likely to be granted

No one should ever pay their credit card issuer a penny more than they have to. That’s true in the best of economic times, and it is certainly true today as consumers wrestle with inflation and rising interest rates.

For years, one of the best ways to avoid paying the bank more than is necessary has been to simply call and ask for a break. That is still the case today, though the latest data from LendingTree reveals that banks are becoming less generous with some of those breaks, including some of the most impactful ones. 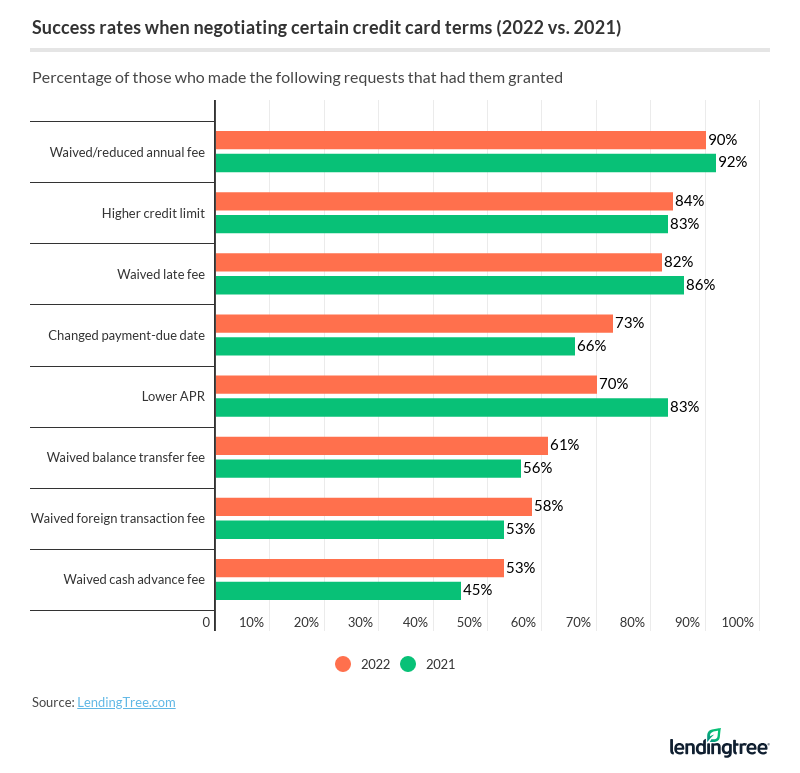 The biggest decrease was with the request for a lower APR. Last year, 83% of those who asked for one received one. This year, that number fell to 70%, a significant drop. The good news is that a success rate of 70% is still really high, and the average APR decrease that issuers granted was about 7 percentage points. However, it is troubling that the break that can have the most impact took the biggest hit.

Why is it so impactful? Consider this:

Unfortunately, banks were also less likely to waive or reduce annual fees and late fees this year, too, though only slightly. 90% of those who asked for a lower annual fee got one (down from 92%) and 82% of those who asked to have a late fee waived were successful (down from 88%). Still, even with the decrease, those chances for success are high, hinting that even those with imperfect credit may be able to get their way if they just ask.

While those asking for lower interest rates might be less likely to get their request approved, those making other types of requests are actually seeing their odds improving. That includes those asking their issuer to waive a balance transfer fee or a foreign transaction fee.

Other requests that were more likely to be granted this year than last:

Fewer cardholders asking for most common requests; men still most likely to ask

In our 2021 report, we saw a record number of cardholders asking for help. Nearly 3 in 4 people (72%) who had accrued a credit card late fee asked to have it waived. Nearly half (46%) of those with an annual-fee card asked to have it waived or reduced. More than 1 in 4 cardholders (27%) asked for a lower APR. Even then, though, there was plenty of room for improvement.

Our latest report, however, shows a reversal of that trend.

The percentage who asked for a waived late fee fell by 31 points, those who asked for a waived or reduced annual fee fell 25 points, for a lower APR fell 12 points and for a higher credit limit fell 11 points. The decreases themselves weren’t a surprise — even with higher inflation, many people find themselves in better financial situations than they did a year ago as COVID-19 cases wane and life climbs more toward normalcy — but the magnitude of the decreases were eye-opening.

Not all the trends were bad, however. More cardholders asked for balance transfer fees, foreign transaction fees and cash advance fees to be waived or reduced, as well as for a later payment due date.

Men were most likely to make these requests, as were millennials and Gen Z. For example, 18% of men asked for a lower APR on their credit card versus 11% of women; and 27% of Gen Zers and 22% of millennials made that request, compared to just 8% of Gen Xers and 6% of baby boomers.

The bottom line: It is worth your time to ask, especially if your credit is good.

You may have more power over your credit card issuer than you realize. The sky-high success rates revealed in this report — though some are a bit lower than in previous years — are proof of that. From a lower interest rate to a waived cash advance fee, you have a better than 50% chance of getting your way with every request, and often that chance is 70% or higher. (If you have good credit, those chances are likely even greater.)

When you combine those strong odds with the amount of money you can save, especially when your card’s APR is lowered, there’s no doubt that it can be well worth your time to ask.

Still, not enough people do. The two biggest reasons for not asking? People didn’t know they could, and they didn’t think they’d be successful. This report aims to end those misconceptions once and for all.

These findings should also serve notice that people should make these requests sooner rather than later. For example, we don’t know whether issuers will continue to be stingier about reducing cardholders’ APRs. However, given that the Federal Reserve is likely to raise interest rates several more times this year, making it more expensive for banks to lend money, it is a distinct possibility that issuers will continue to become less receptive to those who ask for lower rates.

Here are some tips for asking for certain breaks from your credit card issuer:

LendingTree commissioned Qualtrics to conduct an online survey of 1,224 credit cardholders, conducted March 10-15, 2022. The survey was administered using a non-probability-based sample, and quotas were used to ensure the sample base represented the overall population. All responses were reviewed by researchers for quality control.

Thinking of asking your credit card issuer to lower your interest rate or waive an annual fee? Your chances of success aren’t as great as in previous years.