COVID-19 and Credit Cards: Nearly Half Who Added Debt During Pandemic Blame Inflation

As we mark the two-year anniversary of the coronavirus pandemic shut downs, many Americans are still experiencing its financial and credit impact — but in very different ways. It’s almost a “tale of two pandemics,” in which 30% of Americans went into debt while another 30% say they actually improved their credit score, according to a LendingTree survey of 1,249 consumers.

“There was a huge disparity in how Americans were affected by the pandemic financially, no question about it,” says Matt Schulz, chief credit analyst at LendingTree. “Some folks emerged from the last two years ahead of the game, while others had their financial worlds absolutely devastated.”

Among those who are dealing with debt, nearly half (48%) put the blame on inflation while 34% cite income loss. We delve deeper into which demographics report credit struggles, how credit issuers have responded and strategies for keeping your post-pandemic credit health in check.

Just about half of consumers (48%) say that their credit card debt changed — for better or worse — during the coronavirus pandemic. 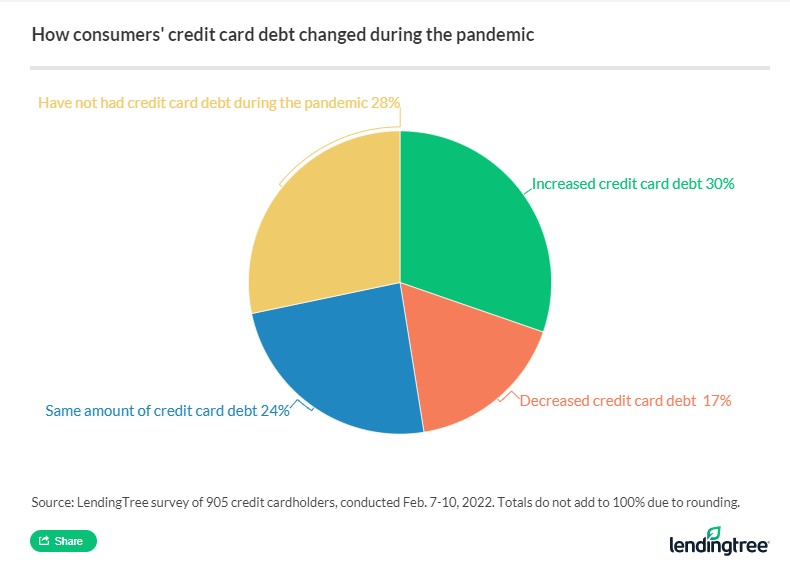 The most popular answer, however, was the 30% of people who added credit card debt — with the biggest debt driver cited by those consumers being inflation. Considering that Consumer Price Index data reported a 7.5% increase from January 2021 to January 2022, it’s understandable that those with already-stretched budgets are struggling.

Parents with kids under 18 (40%) were more likely than any other demographic to experience more debt during the pandemic, and that’s despite the expanded child tax credits. Other groups more prone to racking up debt were millennials (39%) and lower income earners (37%).

“Inflation has been such a massive story and placed such hardship on so many Americans that it makes sense that it would be at the top of the list,” says Schulz. He also notes that income loss and medical costs are always major credit card drivers, pandemic or not. The other game changer is the pandemic’s version of retail therapy.

“We’ve seen many cases where folks have overspent to make up for how crummy the last two years have been,” he says. 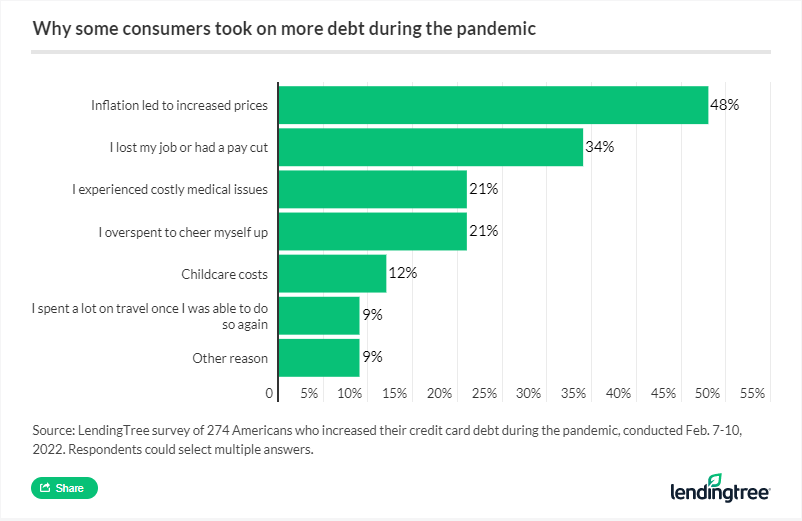 One of the unfortunate results of carrying extra debt loads is sometimes not being able to make credit card payments on time, as was the case for more than a quarter of cardholders (28%). In fact, the demographic groups most likely to have missed a payment — parents of younger children (45%), millennials (42%), those earning less than $35,000 (36%) and women (33%) — are closely aligned with the groups of consumers who were also more likely to have added debt.

The correlation makes sense, notes Schulz. “Late payments can definitely cause debt to pile up. Depending on how late you are, you could get hit with a penalty interest rate, which can often be near 30%,” he says.

Not only can late fees and penalty rates make your balance grow even faster, but missed payments can wreck your credit score, forcing you to settle for higher interest rates on future loans, notes Schulz: “That can cost you a fortune over the years.”

It’s always a good idea to get in touch with your credit issuer if you’re struggling to make payments and see if there’s a hardship plan that can help. But calling could be worthwhile even after you miss a payment: A previous LendingTree report found that 88% of those who asked their issuer to waive a late fee were successful.

For some consumers, the pandemic actually provided an opportunity to reduce their credit card debt (17%). 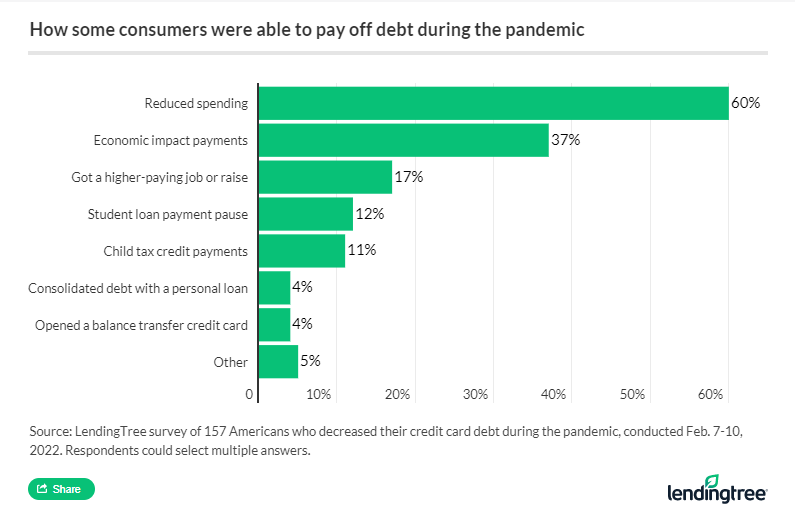 “With lockdowns, reduced spending and deferments on other loans and government stimulus, millions of Americans paid down their credit card debt and other high-interest debt significantly in the past two years,” says Schulz. “That’s a very good thing, both for your wallet and your credit score.”

Card closures and credit limit reductions were very common at the start of the pandemic (as a prior LendingTree report found) — but in some cases, it’s still ongoing. The survey revealed that 14% of consumers had their limits cut in the past six months. What’s more, 13% had an issuer close a card entirely in that same time period.

“Card issuers close credit cards or slash credit limits to minimize their own risk,” says Schulz. This is especially true for accounts that are dormant. “If a card isn’t being used and doesn’t have an annual fee, the issuer isn’t making any money off of it, making the card expendable to the bank,” he adds.

The best way to avoid this happening is to use your cards for small charges, such as recurring streaming-service subscription payments. “That way, the card is being used, but you aren’t spending extra to do so,” says Schulz.

If your card is closed or the credit limit is slashed, you could ask your issuer to reconsider, or ask the issuer of another card for an increased credit limit. “Doing so can help minimize the damage to your credit score caused by the closure or reduction,” says Schulz.

Some say the pandemic had a positive impact on credit scores

For consumers who were able to make financial improvements during the pandemic, three out of 10 saw their credit scores improve as a result. 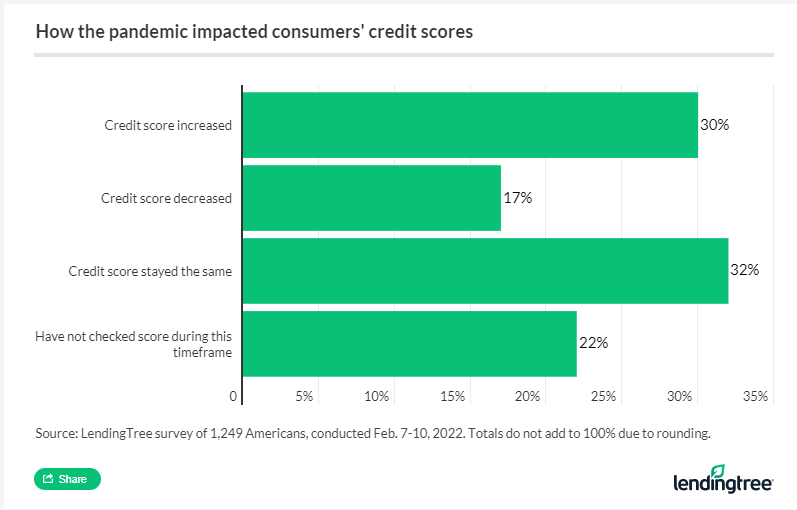 Unfortunately, the group that could benefit from a score boost the most — those earning less than $35,000 per year – had the smallest percentage reporting an increase (21%).

Of course, 22% of respondents admitted that they haven’t checked their score in the past two years, including nearly a third of the youngest consumers, Gen Zers. This is troubling, according to Schulz — not just because it’s important to know where you stand, but also since you might miss signs of potential identity theft.

“If your score drops significantly and you haven’t done anything to cause it, it could be that a fraudster has opened up an account or two in your name and run up balances without paying it off,” he says. “If you don’t check your credit report or score, you might not know otherwise.”

The coronavirus crisis didn’t stop nearly one-third of consumers (32%) from opening up a new credit card. In fact, the top reasons cited for doing so were to earn rewards (44%) or score a sign-up bonus (33%). 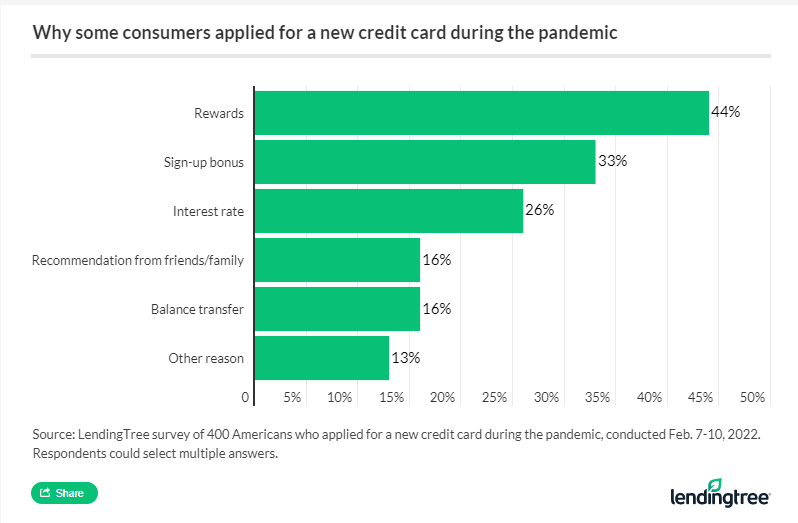 Some consumers — 14% — simply chose to change their primary card in order to focus on rewards that best reflected their new pandemic-impacted lifestyle. Card issuers saw this and made some tweaks to their programs.

Overall, about one in five (21%) of consumers say they are cashing in on their credit card rewards or points/miles more often than they were prior to the pandemic, which Schulz says is a good thing if they’re being used wisely. “Rewards points and miles are depreciating assets. They’re never going to be more valuable than they are today, so hoarding them is a bad idea,” he says.

Rewards or not, about one in three Americans (33%) say they’re using credit cards more often than they were before the pandemic.

No matter which credit pandemic tale you relate to, these key strategies can help you maintain your credit health.

Keep tabs on your credit score and credit report. Knowing where you stand is important so you can decide if your budget needs some attention. Everyone can access their free credit report from the three major credit bureaus (Experian, Equifax and Transunion) via annualcreditreport.com, while free credit scores are widely available via your credit card accounts and perhaps your bank or credit union.

Use technology to your advantage. One of the best ways to avoid late payments, which can wreck your credit score, is to set alerts and use your credit account’s other tools. “Automatic payments can make paying late a thing of the past, and they’re typically easy to set up,” says Schulz. Just don’t get in the habit of paying only the minimum due, he adds, as that can lead to long-term debt.

Analyze your spending to see if your current cards are providing value. “If you haven’t reviewed your cards in the past few years, you probably should,” says Schulz. How you spend can change dramatically over the years, and what you have in your wallet may not fit your lifestyle anymore. “Take the time to review what rewards and perks your card offers, along with what categories you spend the most on and make sure that they match up. If they don’t, it is probably time for a new card,” Schulz adds.

Get serious about debt payoff. One tool that may help: Balance transfer cards that offer introductory periods of 0% or low APRs. “They can make a huge difference for folks with credit card debt,” says Schulz. “Not only can they reduce the amount of interest you pay and how long it takes to pay off your debt, it can also streamline your finances.” That’s because you can take balances from multiple cards and consolidate them into one, letting you focus on making just one payment.

Give your budget a thorough review. Whether you’re trying to find a little bit more money to pay toward your credit card debt or to deal with rising grocery and gas prices, a financial audit can help. “Budgets are living documents. They need to be reviewed, tweaked and updated regularly to make sure they’re effective,” says Schulz. “Life has changed a lot for many of us in the past two years, so if you haven’t checked your budget recently, now is a great time to do so.”

LendingTree commissioned Qualtrics to conduct an online survey of 1,249 consumers from Feb. 7-10, 2022. The survey was administered using a nonprobability-based sample, and quotas were used to ensure the sample base represented the overall population. All responses were reviewed by researchers for quality control. 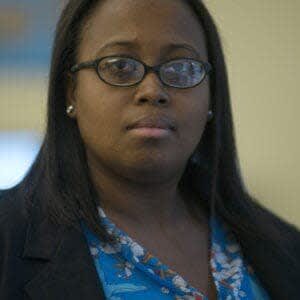 COVID-19 and Credit Cards: Nearly Half Who Added Debt During Pandemic Blame Inflation

30% of Americans went into debt while another 30% say they actually improved their credit score, according to a new survey from LendingTree.