One in four American credit cardholders said they’ve involuntarily had their credit limit slashed on at least one of their credit cards or even had a card closed by their issuer in the past 30 days, according to a new report from LendingTree.

After analyzing the data from this survey, we were surprised by the large number of cardholders who said they had their credit limit slashed or their credit card closed involuntarily. Because of that, we chose to run the survey a second time in order to confirm our findings. After analyzing the second round of data, we were confident in presenting the original set of data here.

The results showed that nearly 50 million American credit cardholders said they have had their credit limit slashed or their card closed in the past 30 days.

Given the enormous impact of the coronavirus outbreak on the American economy – and especially the unprecedented spike in unemployment that has occurred in recent weeks – it is no surprise to see banks reining in lending. Something similar happened a decade ago when lenders slashed credit limits and closed card accounts at the outset of the Great Recession.

Why would an issuer cut your limit? To minimize risk. In good economic times, banks are more than happy to give cards and bump up credit limits for good borrowers because lenders are confident that they’ll get repaid. In uncertain economic times, when a consumer’s financial life can literally be turned upside down in a day, banks get nervous. That available credit suddenly looks like an untenable risk, so banks often rein it in, to the chagrin of the cardholder. It’s clear from this data that lenders are repeating their actions once more. 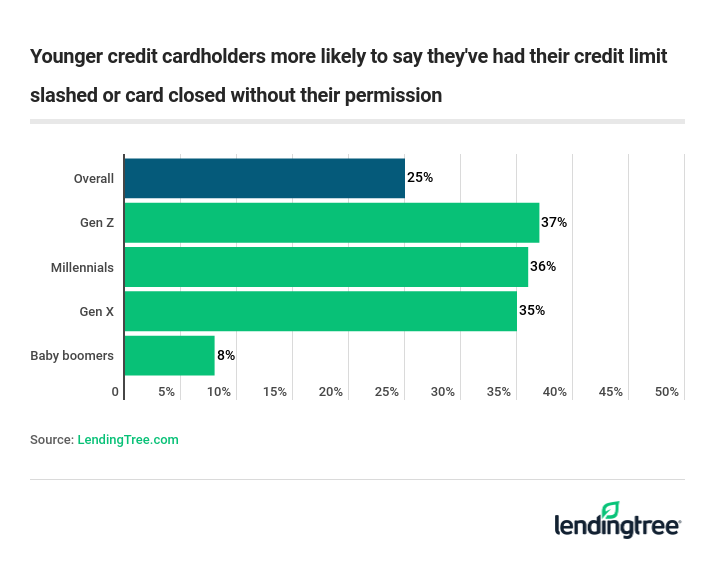 Big impact at a tough time for cardholders

While the moves make bottom-line sense for card issuers, they don’t make it any easier for cardholders, as for many of them, the reductions and closures come at the worst possible time.

The unfortunate truth is that many Americans see their credit cards as a lifeline – a de facto emergency fund – to cling to in difficult times. Surely, many consumers intend to use their cards to help bridge the gap between their last pre-layoff paycheck and their first unemployment check. Having their cards’ credit limits slashed makes that much harder.

Complicating things more, banks aren’t required to inform cardholders that their limits are being slashed, except in a few cases. (For example, if a reduced credit limit leads to an over-the-limit fee being charged to the cardholder, the fee cannot be charged unless the bank gives the cardholder 45 days’ notice.) For most other major changes to a credit card’s terms and conditions – think APRs and annual fees – the Credit CARD Act of 2009 requires issuers to give cardholders 45 days’ notice before a change can be made.

Just 16% of respondents said they knew that their issuer typically didn’t have to inform them about the lower credit limit. That means that an awful lot of cardholders may get an unpleasant surprise at just the wrong time.

We don’t have data on how much the credit card limits were reduced by. However, the median credit limit today is about $20,000, according to data from LendingTree, so it’s likely that many cardholders are seeing their available credit reduced by thousands of dollars.

Add in the fact that 30% of cardholders said they’re using their credit cards more than ever since the beginning of the outbreak, and you see that these limit reductions and card closures can have a major impact on cardholders’ budgets. 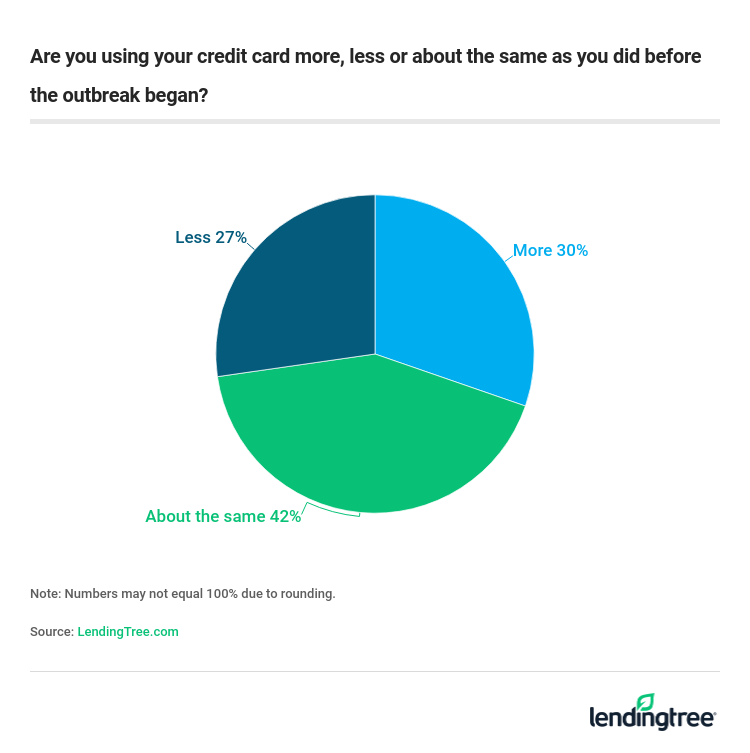 Reduced limits can hurt your credit, too

Lower credit limits and closed credit cards don’t just impact how much you can spend on your cards. It can also have a huge effect on your credit. That’s because your credit utilization rate can take a hit as a result.

Your utilization rate is the second-most important factor in credit scoring formulas, second only to your payment history. That means that a big hit to your utilization rate will likely hurt your credit score, and it’s an additional hurdle that no one whose financial lives have been flipped upside down by the coronavirus outbreak needs to face right now.

If you don’t carry a balance each month, the lower credit limits won’t have as much of an impact on your credit. (If your balance is $0, your utilization rate is going to be 0% whether you have limits of $100 or $100,000.) But that’s simply not a reality for many cardholders today nor will it be for some time.

The bottom line: Take steps to minimize the damage – or possibly avoid it altogether

Ultimately, there’s nothing you can do that is guaranteed to keep a bank from reducing your credit limit or closing your card altogether. The bank will do what it is going to do. That doesn’t mean, though, that you can’t take some steps that might help.

The best thing you can do to protect a card you think might be in danger of having its limits slashed or being closed is simply to use it more. Historically, we’ve seen that dormant or rarely-used cards are the most likely to be closed or have their credit limits slashed in tough economic times. Why? Banks make money on cards when they’re used, either through fees or interest. If a card isn’t used and doesn’t have an annual fee, the issuer doesn’t make money off of it. If the issuer isn’t making money off the card, they are more likely to see the card as expendable.

However, the last thing anyone should do now is spend more money than they feel comfortable on anything. The good news is that you shouldn’t have to. Here are a few tips to help improve your chances of keeping your card unaffected – or to minimize any damage that might be done.

LendingTree commissioned Qualtrics to conduct an online survey of 1,039 credit cardholders, with the sample base proportioned to represent the overall population. The survey was fielded April 22-24, 2020.