More credit cardholders are asking their card issuers for breaks on late fees, annual fees and interest rates than ever before, according to a new report from LendingTree — and they’ve never been more successful.

That’s especially true for women, who significantly narrowed the gender gap when it comes to both asking for breaks and getting those requests granted.

The report also found that the financial impact of the pandemic was the biggest factor driving cardholders to ask their card issuers for help. Those who had experienced some sort of income loss in the pandemic were the most likely to ask for help, and they were sometimes just as likely to have their requests granted as those whose income hadn’t been impacted. 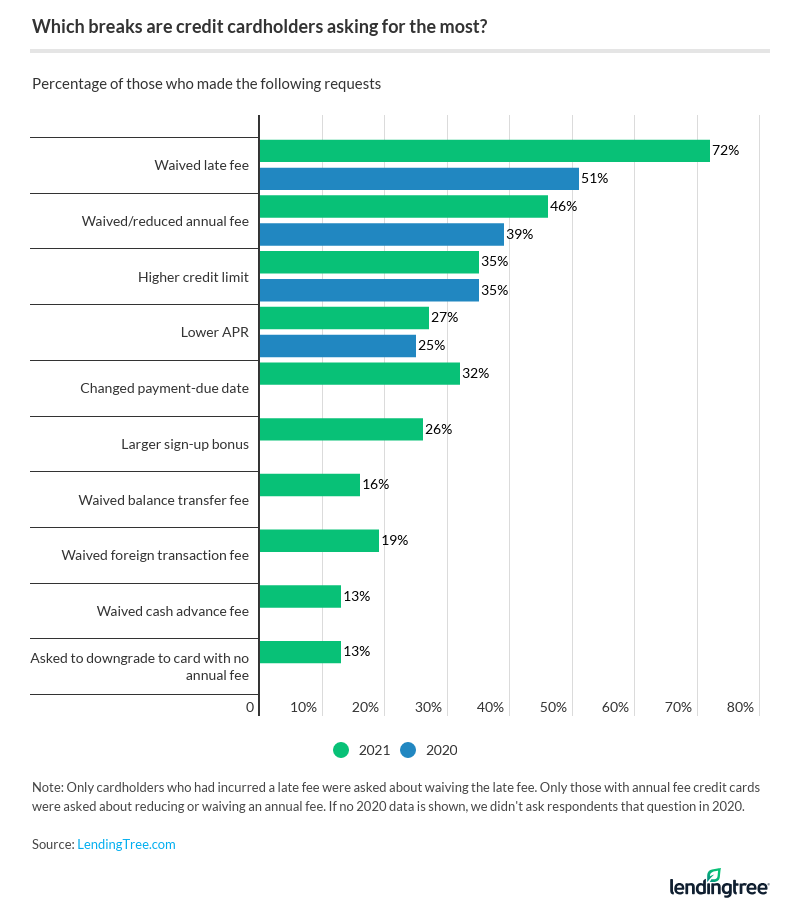 Lower APRs: The most important request

Percentage of cardholders making the request: 27%, up from 25% last year
Success rate: 83%, same as last year

When it comes to credit card terms and conditions, many things can be negotiable. Ultimately, it never hurts to ask. However, not all these changes are created equal.

If you have credit card debt and are wondering which of these requests to make first, choose asking for a reduced APR — it’s the move that’s likely to have the biggest impact.

A 10 percentage-point reduction may sound like a lot, but that was both the median and the average reduction that people got who were successful with their request.

Before you make the call, come armed with ammunition in the form of other offers you’ve seen at a site like LendingTree.com or that you may have received in your snail mail. Take that offer and use it to frame the conversation: “I’ve been a good customer of yours for a long time and I like my card. However, the APR is 25% and I’ve just been offered one with a 19% APR. Would you be able to match it?” As our survey data shows, they’ll likely be willing to work with you, at least to some degree.

Waived or reduced annual fees: The request most likely to be granted

Percentage of annual-fee cardholders making the request: 46%, up from 39% last year
Success rate: 92%, up from 90% as last year

If your card’s annual fee is causing you to rethink keeping the account open, you may be surprised to know that you can ask to have that fee waived or reduced — and your chances of success are quite high.

In fact, in this past year, issuers were increasingly more likely to waive a fee altogether (though usually just temporarily, like for one year) than simply offer to reduce it.

That’s good news for cardholders, and yet another reason to make the call.

Before you make the call, think about what you will accept. If you ask for a fee to be waived altogether and they only offer to reduce it, is that good enough? What if they offer you extra rewards points or miles or make some other counteroffer instead of a reduced fee? And perhaps most important, what if they say no? As with many negotiations, you have more leverage if you’re willing to walk away, so that could be an option. However, you shouldn’t make that threat unless you’re willing to follow through with it, and you shouldn’t follow through with it unless you’ve thought about what that would mean for your credit.

No one likes to pay their credit card bill late, but it happens from time to time. The best thing you can do if your payment is late is to call your card issuer and ask to waive that fee, which can run anywhere from about $30 to about $40.

Just pick up the phone and be polite. If you’re a long-time customer with good credit and this is your first offense, the odds are in your favor. In fact, some card issuers will even waive a first late fee as a matter of policy. If you’ve been late multiple times in the recent past, however, your chances probably aren’t as good. Even so, it never hurts to ask.

Percentage of cardholders making the request: 35%, same as last year
Success rate: 83%, up from 82% last year

Increasing the limit on your credit card can be extremely useful in a couple of ways. For one, it can give you a little extra spending power if you need it. It can also help you improve your credit score by lowering your utilization rate if you’re carrying a large balance — that is, how much debt you have compared to your available credit. The amount you owe, including your utilization rate, is the second most important factor impacting your credit score, so lowering that rate can have a real impact.

A higher credit limit can be dangerous, however — if all that extra credit just leads you to spend more money and rack up more debt, it simply isn’t worth it.

Start with a number in mind based on your current limit. The average increase reported in our survey was about $1,500, but your situation will vary. If your current limit is $500, a $1,500 bump might be asking too much. However, if your current limit is $5,000, that request might be just fine. Think about why you’re asking for the increase — for some extra spending power or to help your credit score — and then decide what to ask for. Just remember that it’s always better to start a negotiation by asking for a little too much. That way, when you negotiate, you can give a little bit and still get what you want.

Negotiating other card terms: You can ask, but your success rate won’t be as high

Again, many terms are negotiable with your credit card. In years of doing interviews on this topic, I’ve been asked from time to time about other breaks that people could ask for beyond the four mentioned above. This year, for the first time, we expanded our survey to include waived balance transfer, cash advance and foreign transaction fees, as well as upgraded sign-up bonuses and changes to payment due dates.

The good news was that many people are asking for these breaks — the bad news is that their chances of success, in many cases, aren’t great.

The most common requests and the ones most likely to be successful were changes to payment due dates. About one in three cardholders said they had asked for one in the previous year, and 66% of those who asked got their way.

Conversely, the least common requests and ones the least likely to be successful were for waiving a cash advance fee. Just 13% of cardholders asked and just 45% of people who asked were successful.

Still, that means that even in the worst-case scenario, you have a nearly 50-50 chance of having your request granted, if only you would ask. If in doubt, pick up the phone and make the call.

The good news, however, is that in most instances, that gap is closing.

The biggest movement came with the most important request.

Both of those changes are good news.

The impact of the pandemic

It’s impossible to overstate the impact the pandemic had on the results of this survey.

Nearly half of all cardholders (47%) asked for at least one of the aforementioned breaks from their card issuer in the past year, and 71% of those who did said the pandemic was their biggest reason for doing so.

Men were more likely than women to say so (76% versus 67%) — which is surprising, given the disproportionately large impact the pandemic has had on women, including higher unemployment.

Much of this success is likely attributable to card issuers’ hardship programs, which have helped many Americans in the past year. These programs are designed to help cardholders through short-term rough patches by giving them breaks on fees, interest rates, minimum payments and more, and they kick into gear during disasters like hurricanes and wildfires — and pandemics.

Our survey showed 17% of cardholders asked for a break from their issuer for the first time this year. The word getting out about these programs, especially in the early days of the pandemic, surely drove more people to make these requests.

The fact that so many people are asking their card issuers for a break and getting those requests granted is certainly a good thing.

Still, even with that growth, far too few people ask their credit card issuer for better terms and conditions. Our survey shows that many people simply don’t know that they can make these requests, while others didn’t think they’d be successful or don’t like to negotiate.

The truth is, however, that people have way more power over their credit card issuer than they realize, and they only need to wield it to save themselves some real money.

It’s incredibly important to know that you have options during a global, economy-wrecking pandemic, of course, but it is also a good idea even in the best of times.

The more fees you can avoid and the more interest rates you can lower, the better — and as this survey shows, often all it takes is a simple phone call to make it happen.

LendingTree commissioned Qualtrics to conduct an online survey of 1,250 credit cardholders, conducted Feb. 24, 2021 to Mar. 2, 2021. The survey was administered using a non-probability-based sample, and quotas were used to ensure the sample base represented the overall population. All responses were reviewed by researchers for quality control.