71% of Americans Have Never Donated to a Political Campaign, and Most Won’t in 2022

The midterms are approaching, which means American voters are getting ready to hit the polls. Although Americans may cast their ballots this election cycle, many aren’t pulling out their wallets. The majority don’t plan to donate to a political campaign in 2022, according to the latest LendingTree survey. Going further, most Americans have never contributed to one before.

LendingTree surveyed more than 1,600 U.S. consumers about why they’ve donated (or haven’t) to a political campaign. Additionally, we asked how people who’ve donated made their contributions, from credit card to cash to check. Here’s what we learned.

Majority of Americans haven’t donated to a political campaign

U.S. politics have grown increasingly divisive, but most consumers aren’t reacting with their wallets. In fact, just over 7 in 10 (71%) of Americans say they’ve never donated to a political campaign. 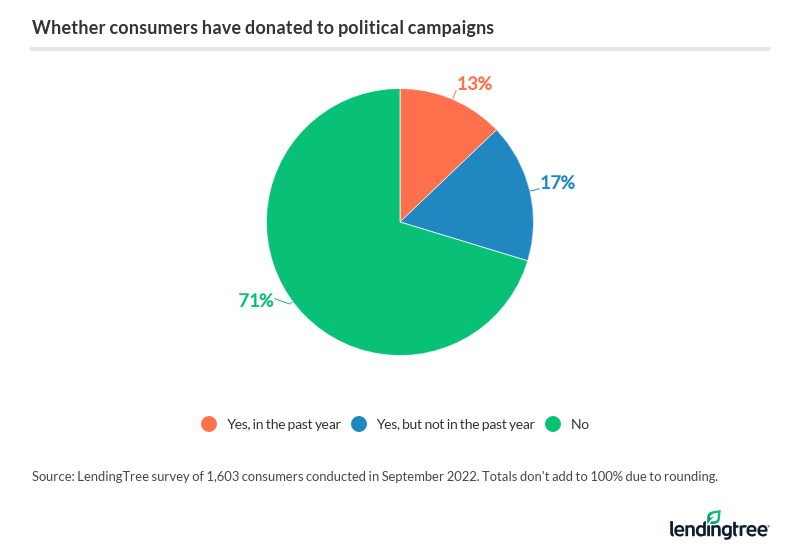 The reason younger consumers top the list may be due to social media. Of those who’ve donated, 45% have done so after seeing a social media post from the candidate or party’s channel asking them to do so.

Most don’t plan to donate this year — here’s why

Despite an especially tense lead-up to the midterms, 66% don’t plan to contribute to a political campaign in 2022. (Another 16% of consumers are on the fence.)

As inflation continues to cut into most consumers’ budgets, rising costs may play a large role for those skipping donations this year. Among Americans who won’t contribute, 46% say they can’t afford to do so — the most common response. Meanwhile, 43% say they’d rather spend their money elsewhere.

Beyond that, distrust and apathy are common themes. Among the other reasons for forgoing donations:

When breaking down the 34% of Americans who plan to donate this year, one political party dominates. Democrats are the most likely to give money, with 29% planning to contribute to a political party or candidate. On the other hand, just 14% of Republicans say they’re planning to do the same — just 5 percentage points higher than the percentage of independents who expect to give (9%).

Regardless of the political party to which they belong, those who plan to contribute aren’t only thinking about the midterms. In fact, 9% plan to donate money to presidential candidates in 2022, though no major candidate has formally entered the 2024 race. Meanwhile, 7% of Americans plan to contribute money to a U.S. congressional candidate’s campaign, though just 35 of 100 U.S. Senate seats are up for election (all 435 U.S. House seats are up for grabs). Local politics also make the list, with 6% planning to donate to a statewide, district or local office candidate.

Some other common reasons for donating include:

Most consumers who’ve donated before aren’t increasing their donations this year. Of those who’ve previously contributed to political plans and plan to do so this year, 39% say they’ll donate about the same as they did before. However, a quarter (25%) will donate more. 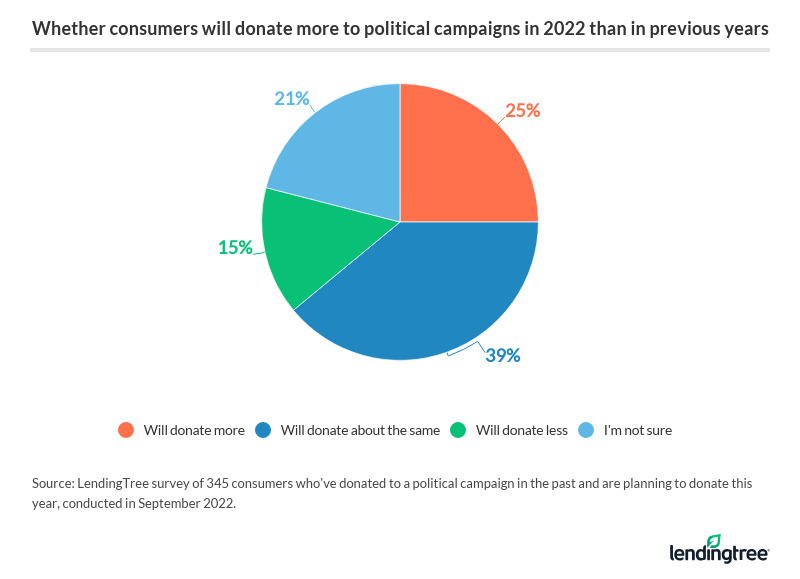 Still, even those who donate more likely aren’t shelling out much. According to estimates from research group Open Secrets, just 0.5% of Americans contributed more than $200 in 2021-2022. Although that percentage is small, those donors make up 73.7% of all political contributions.

When it comes to the payment methods they’ve used, those who’ve donated generally prefer plastic over paper. Of those who’ve previously contributed to political campaigns:

“When spending comes too easily, overspending often isn’t far behind,” Schulz says. “That’s true even with political donations. You have to be thoughtful in figuring out how much to give. As much as you love the candidate you’re supporting, going into debt to donate to them probably isn’t your best choice, especially in times of rampant inflation and rising interest rates.”

That’s not the only way convenience impacts political donors. In fact, 22% of those who’ve contributed to political campaigns say they’re enrolled in automatically recurring political donations.

Americans believe there’s too much money in politics

Regardless of whether they plan on donating, nearly 9 in 10 (89%) Americans think money has too much influence in politics. 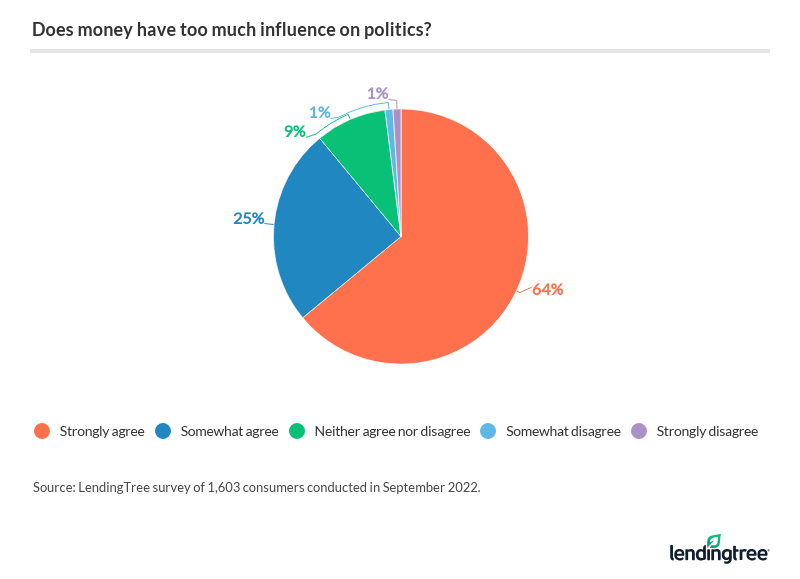 By age group, baby boomers are the most likely to agree with this sentiment, at 92%. On the other hand, Gen Zers are the least likely — just 83% of the youngest cohort agree.

Still, most Americans increasingly believe their financial contributions don’t matter. Only 27% believe their political donations make a difference, down from 35% in 2020. Democrats are still the most confident that their contributions matter. While 46% believed so in 2020, that figure is 38% in 2022.

Schulz believes inflation may be partially to blame for consumers’ declining optimism. Still, he says that shouldn’t deter Americans from donating.

“There’s what seems like an infinite supply in politics today, and it can make it seem like your little $10 or $25 donation means as much as a grain of sand on the beach,” he says. “Giving $20 to your favorite presidential candidate probably doesn’t matter much in the grand scheme. Giving $20 to your local city council or school board race may be something else entirely. Ultimately, however, it’s about putting your money toward what matters most to you, regardless of whether that money has a big or minimal impact.”

Given that donors are most driven by their passion for a particular issue, what political problems are on consumers’ minds? Amid a year of high inflation, 59% of Americans say the economy is the most important issue in upcoming elections. 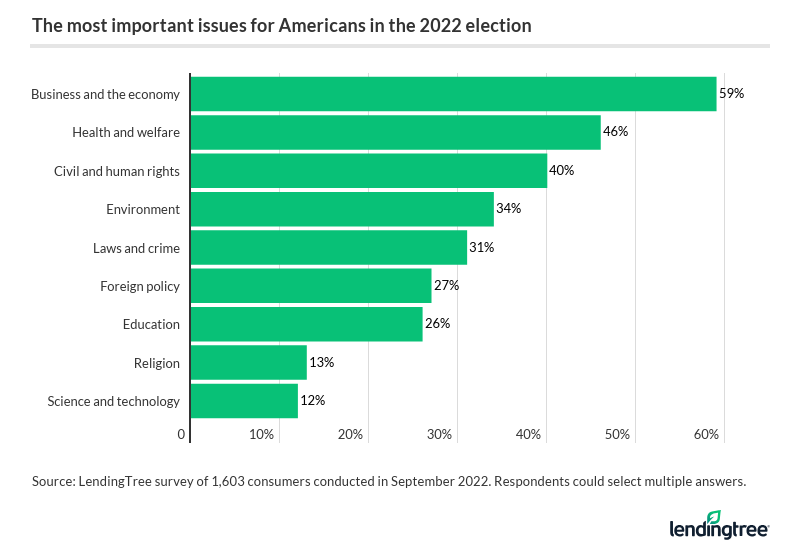 Business and the economy consists of topics such as jobs, taxes and monetary policies. Health and welfare includes Medicare and Medicaid, Social Security and unemployment. Civil and human rights, meanwhile, includes abortion, marriage equality and gun control. Some of the other topics consumers were asked about include:

“Inflation is clearly an enormous concern for consumers,” he says. “It impacts virtually everything we do and helps shape our views on how well our current leaders are doing their jobs. For some, it will spur them to donate more toward their candidate of choice. For others, it may dampen their enthusiasm about a candidate and keep them from donating anything at all.”

What to keep in mind when donating this midterm election cycle

As Americans increasingly focus on November’s races, you may feel motivated to donate to a political candidate or party you support. Increasing costs may feel particularly disheartening, but Schulz says that shouldn’t stop you from donating. He offers the following advice:

LendingTree commissioned Qualtrics to conduct an online survey of 1,603 U.S. consumers ages 18 to 76 from Sept. 23 to 24, 2022. The survey was administered using a nonprobability-based sample, and quotas were used to ensure the sample base represented the overall population. All responses were reviewed by researchers for quality control.

Millions of Americans say they’re ready to give money to help political campaigns, even if they had never done so before.

The latest LendingTree survey discovers that 1 in 4 Americans are currently boycotting a product or company they’d spent money on in the past.