The coronavirus pandemic has drastically altered the way Americans spend money. In many cases, that has meant cutting back — but one area where many consumers are spending more is on subscription services.

A recent LendingTree survey found that 1 in 3 respondents had purchased a new online subscription as they sheltered at home to reduce the spread of the virus as well as to entertain children after schools have closed.

As might be expected, streaming subscriptions have seen a wave of sign-ups as people look for ways to fill their time for themselves and their families without having to come in contact with the outside world. For example, Netflix added 15.8 million subscribers in the first quarter of 2020, according to a letter to shareholders. And according to an April article in The Guardian, Disney+ almost doubled its subscriptions between February and April, hitting 50 million subscribers. 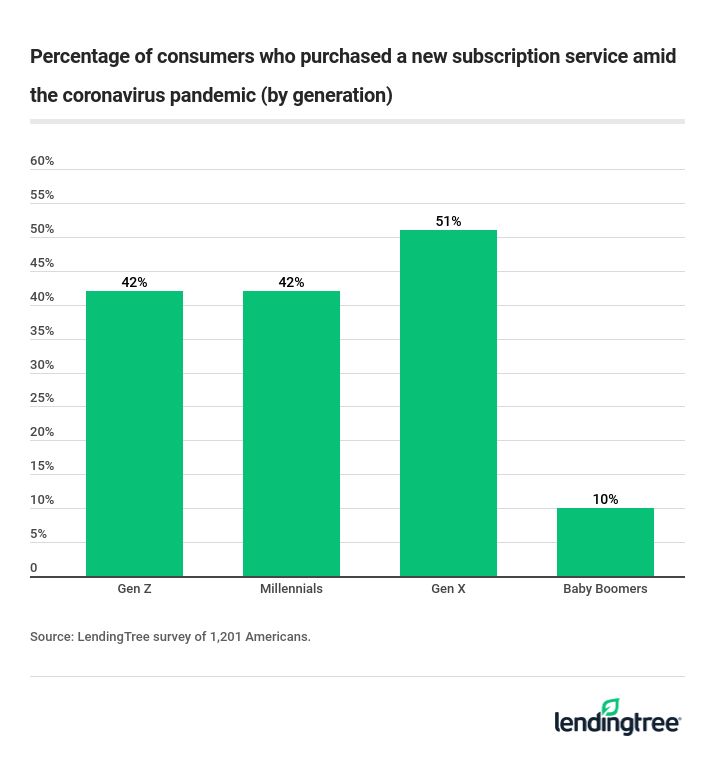 “Even though we aren’t leaving the house, people need to be entertained,” said Matt Schulz, chief credit analyst at LendingTree. “They want to see new shows, eat interesting new foods, feel the rush of a good workout. Without those, this difficult time would be far worse.”

When asked to select why they signed up for a new subscription, 39% of respondents said that they did so to reduce having to leave the house to purchase necessities. Millennials led the pack with 43% saying so.

Another popular reason cited was to support businesses during this period of economic uncertainty caused by the COVID-19 pandemic. This was most popular among members of Gen Z, with 22% saying so.

Parents most likely to sign up for streaming, food delivery services

With rampant school and day care closures, it’s no surprise that 41% of survey respondents who got a new subscription said the main reason they signed up was to entertain their children. Nearly 60% of those who are parents of children under 18 years old purchased a new subscription of some kind. 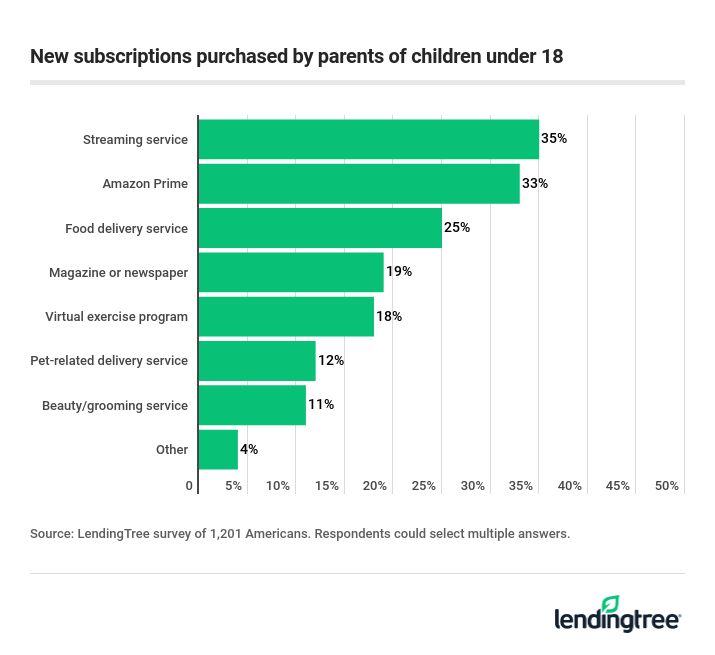 The three most popular new subscriptions reported for parents were as follows:

For all of these services, parents were more likely than the average respondent to sign up. Here’s what the overall numbers looked like:

“As a parent, I can tell you that streaming services have been absolutely essential,” Schulz said. “While most parents don’t want their kid sitting around all day just watching screens, the reality is that a little screen time for kids can often free up parents to get other things done — or even just slip away for a moment of zen on a crazy day.”

How to avoid overspending on subscriptions

The average amount consumers reported spending on new subscriptions due to coronavirus-related circumstances was $192.30. Millennials led all age groups, spending an average of $315.90 on new subscription services. This represents a significant increase over normal spending, considering that a LendingTree survey from March 2020 found that the average American spends just over $50 per month on subscriptions.

Baby boomers spent the least on new subscriptions, at an average of $43.40.

If you’re thinking about adding a subscription, evaluate what your spending patterns look like right now. For example, staying at home more might mean you’re saving on gas, but spending more on utilities. And if you’re cooking more at home rather than dining out at restaurants, that could mean savings on dining but more spent on buying groceries.

“When deciding whether to subscribe, remember your budget,” Schulz said. “That new streaming service may have all the buzzworthy shows that people are talking about, but if you’re wondering where your next paycheck will come from, you may need to pass.”

LendingTree commissioned Qualtrics to conduct an online survey of 1,201 Americans, with the sample base proportioned to represent the overall population. The survey was fielded April 3-6, 2020.

Our survey found that 1 in 3 respondents had purchased a new online subscription as they sheltered at home to reduce the spread of the coronavirus.