After an exciting NFL playoffs season, it’s Super Bowl time! However, instead of matching or exceeding the amount of money spent last year on Super Bowl-related activities, many Americans plan on scaling back.

According to LendingTree’s survey of more than 2,000 Americans, Super Bowl spending is expected to be down 19% from 2021, and more than a quarter of respondents says they won’t be tuning in at all. On the other hand, 3 in 10 do plan on placing a Super Bowl-related bet (including on the Puppy Bowl!), and many of those bettors will be using a credit card to do so.

Find out who plans to do the biggest game day spending and gambling, and score some credit card sports betting tips that’ll increase the odds of keeping your finances intact.

Fans will spend less on the big game this year

While Americans spent an average of $108 on last year’s Super Bowl (including food, drinks, decor, betting and more), this year, respondents expect to shell out just $88. 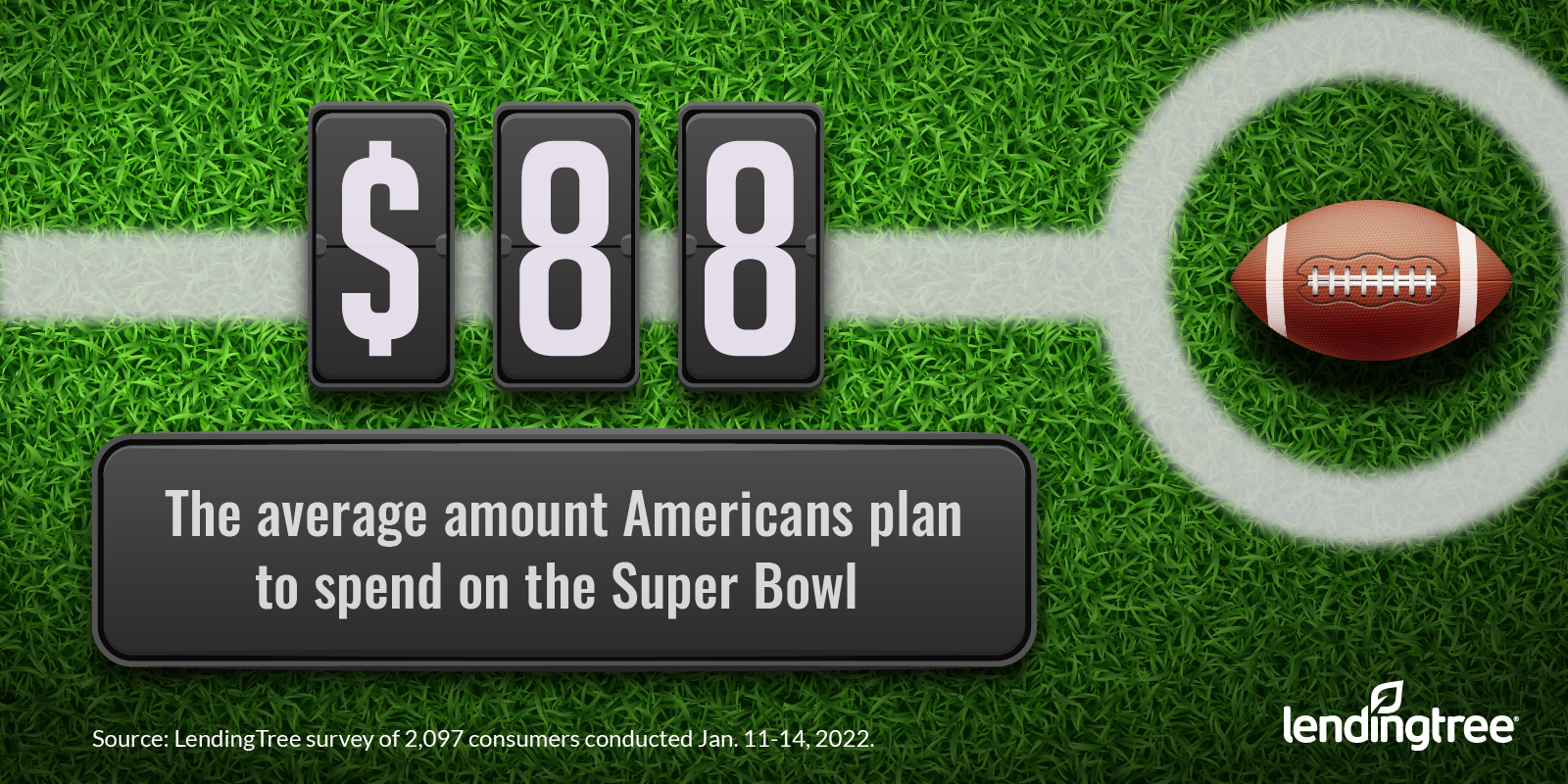 Matt Schulz, chief credit analyst at LendingTree, says he’s surprised that people plan to spend less on this season’s Super Bowl, but he has one theory. “While many Americans had a little extra cash in the bank last year at this time thanks to reduced spending and some government stimulus, most people have likely burned through that cushion,” he says. “That may prompt more people to take a little more low-key approach to watching the game.”

Of course, not everyone will be downplaying Super Bowl Sunday. Millennials say they will spend the most ($138) among the age groups, while high-income fans (earning over $100,000 per year) plan to go over the $200 mark.

Regionally, Northeast fans expect to spend the most ($144), around double other areas’ fans — and they’re also more likely to get in on some betting action than the other regions.

Professional sports often dominate the discussion in the Northeast more so than college sports, which are a bigger draw elsewhere, Schulz notes. “Combine that with the fact that incomes tend to be higher in that part of the country and that several big states in that region have legalized sports betting, and it stands to reason that folks in that area would be more likely to bet on the big game,” he says.

Surprisingly, more than a quarter (28%) of respondents say they don’t plan to watch the game at all — a greater percentage than last year, when 21% say the same.

Schulz is skeptical of that response, though he admits that last year’s game had enormous star power with Tom Brady and Patrick Mahomes quarterbacking.

“The Super Bowl is one of the few things left in this country that everyone feels they have to stop and watch when it happens,” he says. “It is an event that is bigger than the game itself and will likely be that way for a long time, no matter who plays in it.”

Gen Zers and millennials most likely to place game bets

Overall, 3 in 10 Americans plan to do some Super Bowl gambling — a number that Schulz says seems lower than expected. “Sports betting is a colossal business in this country and is only getting bigger because it is getting easier and easier to do. And nothing draws bettors’ interest quite like the Super Bowl.” 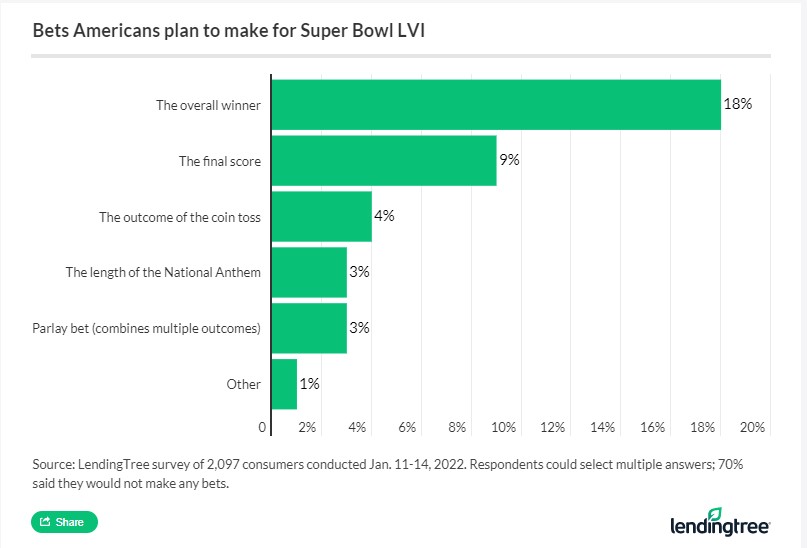 However, some groups are more into making wagers than others, including Gen Zers (42%), millennials (41%) and men (36%). “There’s no question that younger males are the biggest driver,” says Schulz.

The good news is that most people (62%) are aiming to keep their betting budget in check, planning to gamble less than $100.

One-third of Super Bowl gamblers plan to place their bets using a credit card. This is likely related to the fact that more than half (52%) will be using a mobile sports betting platform. 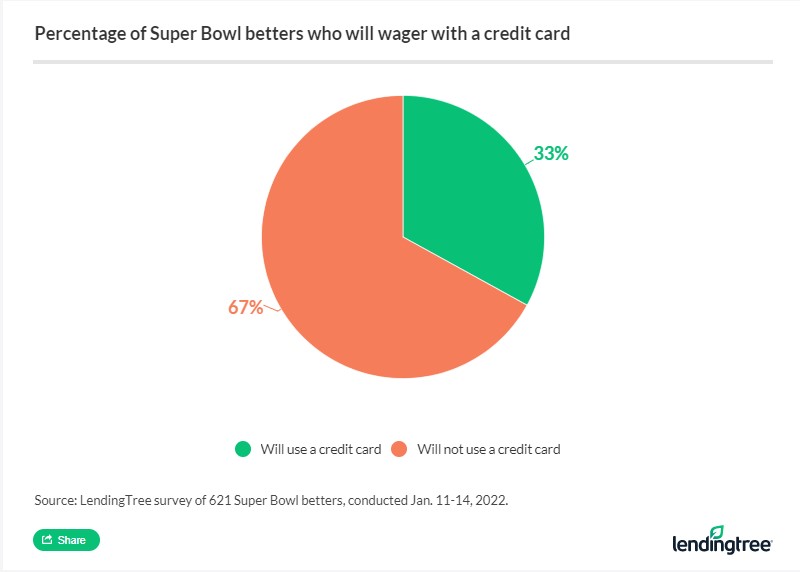 While Schulz expects credit card issuers to become more comfortable with the growing legalization of sports gambling, he warned that credit cards and sports betting can be a volatile mix for some. “Done in moderation, gambling with your credit card can be largely harmless fun. Done recklessly, it can wreck lives,” he says.

You should check with your card issuer to see how online gambling is treated — in some cases, it may count as a cash advance transaction, which typically means much higher interest rates and less favorable terms. You also may not earn cash back or rewards as you would with other types of purchases.

In some cases, gambling could pay off — if you can manage to pick a winner. Last year, 14% of people say they came out ahead, while 8% lost money on the big game.

It’s also worth noting that some people aren’t just betting on the game itself — the survey found that 35% of Americans would actually rather bet on the Puppy Bowl than the Super Bowl (in particular, 44% of women versus 25% of men).

Though he loves watching the Puppy Bowl, Schulz was surprised to hear that it was such a popular source of betting, quipping, “Make no bones about it: Doing anything more than placing a little fun wager on something like that is probably a doggone bad idea.”

LendingTree commissioned Qualtrics to conduct an online survey of 2,097 consumers from Jan. 11-14, 2022. The survey was administered using a nonprobability-based sample, and quotas were used to ensure the sample base represented the overall population. All responses were reviewed by researchers for quality control. 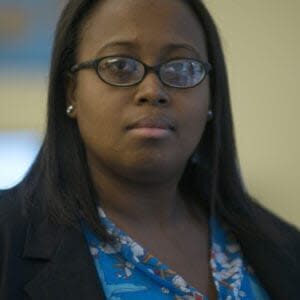 LendingTree’s survey reveals Super Bowl spending will be down 19% from 2021, and more than a quarter of respondents says they won’t be tuning in at all.