Tax Refunds Are $3,660 on Average — See How Much Taxpayers in Your State Receive

Every spring, American taxpayers must reflect on their income from the previous year to square away their earnings with Uncle Sam. Most are relieved to find out they’ve overpaid on their federal income taxes and are owed a refund, but an unfortunate few are left with an expensive tax bill.

Just over three-quarters of Americans are owed a refund when tax season rolls around, and they receive $3,660 on average, according to the latest study from LendingTree. Researchers analyzed the most recent IRS data to estimate the average tax refund and see where taxpayers are owed — and owe — the most.

Tax season provides a much-needed stimulus to help people bolster their savings or pay off debt they accrued over the holidays, so it’s significant that most taxpayers can expect to get a federal income tax refund. According to the most recent IRS data, from tax year 2018, 76% of taxpayers received a refund, while 21% owed money to the IRS. 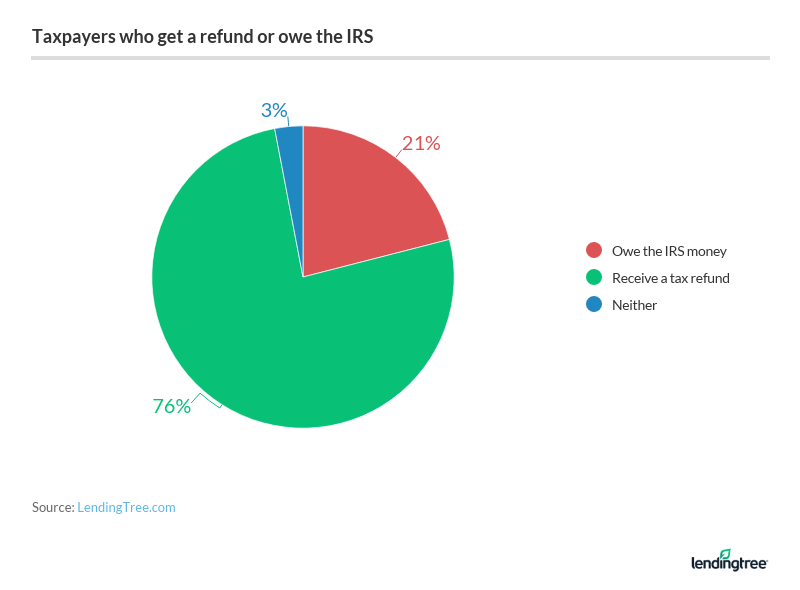 In some states, a higher proportion of residents will get a tax return than in others, and likewise for those who owe. For example, just 14% of West Virginia residents owed money to the IRS in tax year 2018, while 83% were owed a refund. In California, more than a quarter (26%) of residents had to pay the IRS, and 71% got a refund.

Taxpayers who were owed a refund got $3,660 back on average. That’s a big deal for many households, since 4 in 10 Americans rely on their tax refund, according to a LendingTree survey published in February 2020.

Residents of certain states tend to receive larger refunds than others. Wyoming taxpayers who received a refund got back $4,602 on average — that’s about double the amount than that of Maine residents, who received the smallest refunds at $2,743.

But there are no distinct commonalities that stand out among the groups of states that got larger or smaller refunds, as each one has its own unique demographics.

Florida also has a sizable population of adults 65 or older, at 21%, which is much higher than the national average of 17%. But the same is true of Maine, which also has a 21% share of adults 65 and older but received the smallest tax refunds of any state.

A dollar can take you much further in some states than it can in others, and the same is true with your tax refund. To put into perspective how long an average tax refund would last for residents, LendingTree researchers compared the average tax refund to the median rent in each state.

For Americans as a whole, the average $3,660 tax refund would cover about three and a half months’ worth of rent. In Wyoming, a $4,602 tax refund could cover almost half a year’s worth of rent payments, assuming the state median rent of $818. See how other states in our analysis compare: 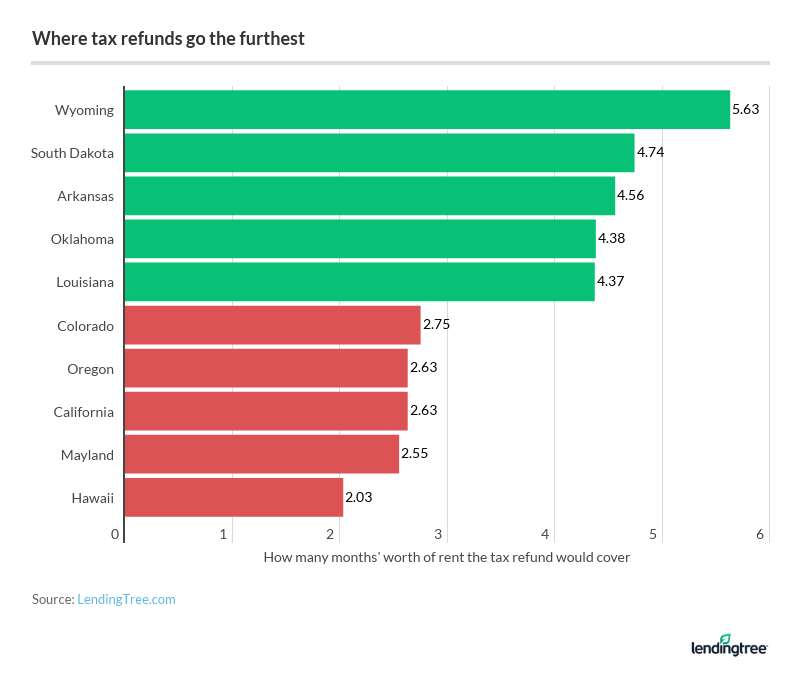 Some of the states where taxpayers received the largest federal income tax refunds also have high costs of living.

For example, residents of the District of Columbia got some of the biggest refunds in the country, but that refund won’t take them as far as it would in a state where the cost of living is lower. Our nation’s capital has the third-highest median rent of any state on our list at $1,516. So, the $4,403 tax refund would pay for less than three months’ worth of rent, comparatively.

Many people dread doing their taxes due to the sheer amount of math involved, but others dread tax season because they know they’ll be left owing thousands of dollars to the IRS. About a fifth (21%) of taxpayers end up with a tax bill. On average, they need to pony up $5,620 to the IRS, which is worth more than five months in rent payments.

In North Dakota, people who owe taxes are stuck with a bill well over $7,000 — that’s worth nearly nine months’ of rent payments, since the median rent is just $808. In California, where the median rent is $1,520, the high tax bill is slightly less burdensome. A $6,500 tax bill would eat up a little more than four months’ worth of rent.

Tip: It may seem like an injustice when you’re the one stuck with such a high tax bill in April. If you’re searching for tax debt relief, consider enrolling in a payment plan with the IRS or settling your tax debt for less than what’s owed with an offer in compromise (OIC). If all else fails, you could consider putting your tax debt on a personal loan or a credit card with a 0% intro APR offer.

LendingTree researchers analyzed the latest IRS tax data, which is from tax year 2018, to estimate the average tax refund and taxes owed in every state. Specifically, researchers looked at the number of tax returns that underpaid on their taxes and found the average amount underpaid. We then compared that to housing costs from the 2018 U.S. Census Bureau American Community Survey one-year estimates.

For people who owe taxes, researchers looked at the number of returns with taxes due at the time of filing and found the average amount of taxes owed.