The Most Maxed-Out Places in America

Credit card balances in the U.S. are now almost $800 billion, the highest since 2009, according to Federal Reserve data. While not all of those balances represent debt that won’t be paid off each month, many consumers struggle with credit card debt. One clear signal that a consumer might in trouble with credit is having at least one card that is “maxed-out,” with a balance that is equal to the total credit limit allotted on the account.

That being said, a maxed-out card is not always a sign of distress. For example, if a consumer is very loyal to one card each month, charging close to the limit and paying it all off on time, this pattern will still show as using nearly 100 percent of a card’s limit. But as long as the owner has no problem paying it off in full each month, it’s usually not a problem.

That’s why when LendingTree sought to find out which cities in the U.S. are truly “maxed-out” on credit, we didn’t just look at where people have at least one maxed-out card. We also looked at how high their balances across all cards are vs their total credit limits. A user with both a maxed-out card, and high balances on other cards could be struggling with debt.

We started with a sample of over a million anonymized LendingTree users in 50 of the largest metropolitan areas.

Then we created a “Maxed-Out Score” between 0 to 100, with 100 signaling metros where consumers are most maxed out on their credit.

We scored the metros on each of these metrics and then weighted the ratings evenly to create the final score and ranking.

Looking across the U.S., most consumers are actually pretty healthy when it comes to their use of credit — less than 20 percent of consumers had at least one card maxed-out and utilization rates of around 30 percent.

But some places stand out more than others. 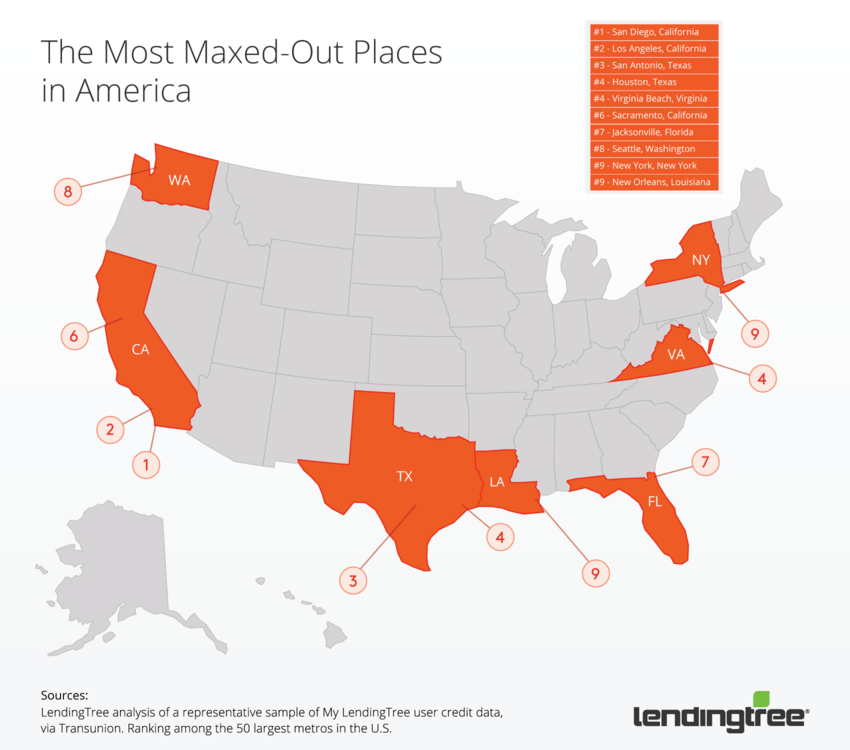 San Diego residents carry $6,629 in credit card balances on average. Nearly one in five (18 percent) have at least one card maxed-out. That’s second only to Oklahoma City, where 18.5 percent of residents have a maxed-out card. But San Diego residents also use more of their credit lines overall, with 32.8 percent utilization. That combination makes San Diego the highest-ranking metro on our scale.

Los Angeles residents also push their credit further than most, with 17.5 percent of residents having at least one maxed-out card. Those that do have a maxed-out card have 1.33 maxed-out cards on average. Balances average $6,472, a touch lower than their neighbors to the South in San Diego, helping utilization come in at 32.0 percent versus San Diego’s 32.8 percent.

Houston and Virginia Beach tie for fourth place on our list.

Houstonians are now dealing with the recovery from Hurricane Harvey, and based on our findings, they might be less ready to handle unexpected expenses than the denizens of other big metros.

Houstonians carry an average $6,936 in outstanding credit card balances, more than the other metros in the top 5 of our rankings. However, the metro’s redeeming quality is its slightly lower rate of residents that have at least one maxed-out card — 17.9 percent versus 18 percent in our No. 1 maxed-out city, San Diego. 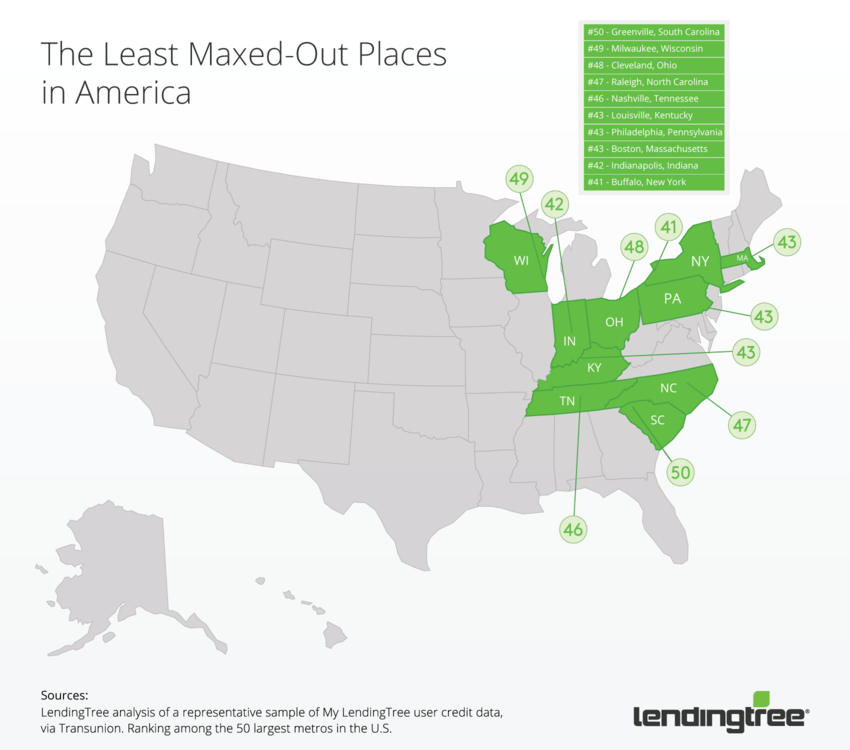 The least maxed-out place in our ranking was Greenville.

Just 15.1 percent of residents have a maxed-out card account in their credit file. While that’s not as low as Milwaukee, with its 14.2 percent, utilization in Greenville is lower. Residents have an average utilization rate of 27.6 percent, versus 28.4 percent for Milwaukee.

Average credit card balances in Greenville are $4,672 — roughly 30 percent lower than those in the most maxed-out metro, San Diego.

Milwaukee is a close second among least maxed-out cities. As mentioned above, at 14.2 percent, it actually has a slightly lower percentage of residents with at least one maxed-out card than Greenville, but has a slightly higher utilization rate of 28.4 percent.

Another Great Lakes city, Cleveland, is also among the least maxed-out cities. Only 14.5 percent of residents have one or more maxed-out credit cards, and the utilization rate is just 28.9 percent.

Consider a structured repayment strategy. It’s easy to stick to making minimum payments, but doing so can let debt linger for much longer than necessary, with interest accruing along the way.

The debt snowball and debt avalanche methods are both popular ways to tackle credit card debt. The snowball method requires prioritizing payments on the smallest balance first to get a quick win. The avalanche method prioritizes paying off debt with the highest interest rates first and working your way down.

A study by the Kellogg School of Management at Northwestern University found the snowball method of prioritizing the smallest balances first was most associated with successful debt payoff, especially when consumers closed accounts as they were paid off, preventing the temptation to charge them up again.

Call and ask for a lower rate. Some credit card issuers will offer a lower rate to responsible customers in hopes that you’ll remain loyal to the card. Use this opportunity with caution. While a lower rate might lower your monthly payment, it’s better to continue paying a higher monthly payment to eliminate the debt more quickly, with more of the payment going toward principal rather than interest.

Refinance if you’re disciplined. Moving your debt to a lower rate card or consider debt consolidation to pay off existing credit debt can make a lot of sense. Not only can you potentially reduce the amount you’re paying in interest (if you are able to qualify for a card with a lower APR or 0 percent APR promo offer), but less money spent on interest means more money going to the principal balance and a much faster payoff. But be advised: Moving debt off a card tempts some to use an open credit line for more spending.

Closing accounts after the debt is transferred is a strategy, though it can lead to a lower credit score since closing accounts lowers available credit potentially raises credit utilization. That can make it more difficult to secure the best rates if you choose to refinance debt in the future.

LendingTree used a statistically relevant sampling (over one million) of anonymized LendingTree user data. The rank of percentage of users in each metro with at least one maxed-out card was weighted evenly with the rank of the average utilization of revolving credit in each metro, creating a maxed-out score from 0 to 100.