Study: College-Educated Women Face Larger Gender Pay Gap, Even If Women Are More Likely to Enroll and Graduate Than Men

Despite the gender pay gap being hotly debated over the years, the conversations haven’t resulted in much change. Women are rising through the ranks when it comes to higher education, but a degree doesn’t necessarily lead to an increase in pay. In fact, women with bachelor’s degrees or higher earned just 76% of what men did in 2019, according to the latest LendingTree study.

However, that percentage does climb gradually when you look at all full-time working women — 25 and older — regardless of degree. In this specific group, women earned 80.8% of what men did in 2019. But to find the year when women with bachelor’s degrees had a closer earnings ratio to men than working women 25 and older in general, you have to go back to 1999. 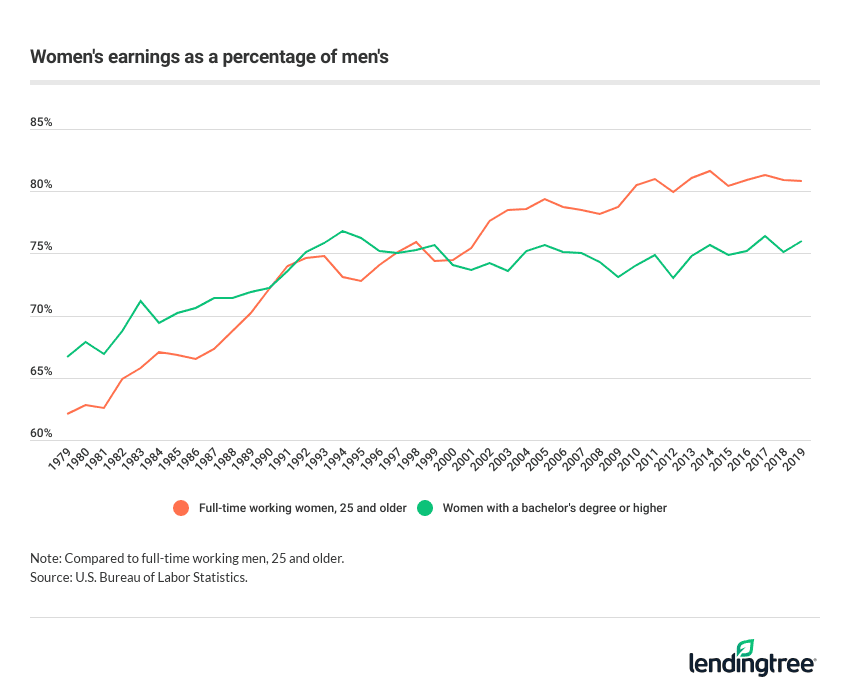 The earliest data available shows college-educated women used to face a smaller gender pay gap than their less-educated peers, with them earning a higher percentage compared to men than women in general every year between 1979 and 1990.

In 1991, that trend turned, however, and the gender pay gap for all women sunk to lower than that for women with bachelor’s degrees — with college-educated women earning 73.6% of what their male counterparts earned versus 74% for women overall.

In 2019, women with less than a high school diploma (76.7%), female high school graduates with no college (75%), women with some college or an associate degree (74.4%) and women with bachelor’s degrees or higher (76%) all earned about a quarter less than men.

Women have been the majority student at U.S. colleges since 1976 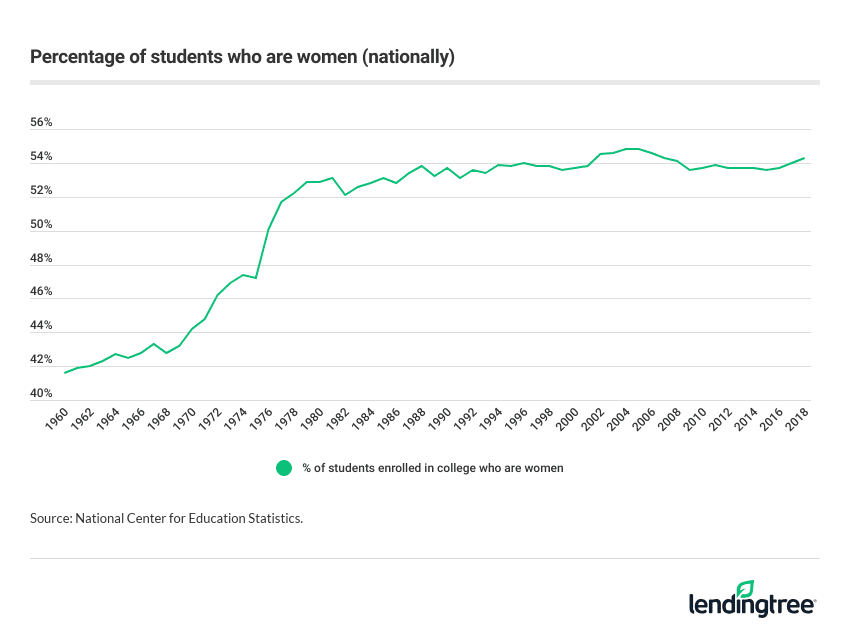 When it comes to male college students, enrollment has also risen higher in recent years. In 1976, there were 1,170,326 first-time degree or certificate-seeking male students in degree-granting postsecondary institutions. By 2018, that number was 1,317,522.

However, the number of enrolled male students has ebbed and flowed significantly since 1976, dropping as low as 984,558 in 1994.

Certain states appear to attract more female students than others. Both New Hampshire (61.9%) and Minnesota (61.7%) lead the way — followed closely by Delaware (60.9%) — as the states with the most female students enrolled in college.

North Dakota, Wyoming at the bottom with less than 54% of students being women

Similar to the three states at the top of this list, these three have a commonality that could help explain the enrollment figures. Montana (49.7%), Wyoming (49.1%) and North Dakota (48.8%) have female populations of less than 50%, according to U.S. Census Bureau data.

When it comes to graduation rates, women are much more likely to complete their degrees than men. For example, 39.7% of men in the 2013 cohort — this is the latest data, which represents anyone who entered school that year and graduated within four years — graduated, compared with 49.9% of women.

LendingTree senior writer for student loans Andrew Pentis believes the rise in college enrollment among women is part of a valuable strategy.

“These statistics bear out that women are more likely, if even by a slight margin, than men to view education as the ticket to advancing themselves and climbing the socioeconomic ladder,” Pentis said. “And, of course, they’re right. Data has long shown that college and advanced graduates earn far more money over their career than peers who don’t attend or complete higher education programs.”

Pentis believes the first step toward closing the gender gap is for people to get more comfortable talking about compensation with their bosses or human resources departments. He said American workplaces are generally secretive about who earns what, which means that workers must put in the research to understand how to fight for their worth.

“You will become more confident in that negotiation once you have done some homework,” Pentis said.

He shared a few tips for making this research easier:

Heavy amounts of student loan debt and high monthly payments caused by attending college can be even more stressful for those being underpaid.

“Unless you work for a company with an open salary structure, you’re not necessarily going to know what your male colleagues are earning,” Pentis said. “So it falls to female workers to start the conversation. Decades of income inequality shows that employers themselves aren’t going to get it started.”
Share Article

Firstmark Student Loan Services Review: What You Should Know

Does your student loan lender use Firstmark? Our Firstmark student loan review has everything you need to know about this servicer.

READ MORE
PenFed Student Loan Refinancing Review: Is It Right for You?

Hoping to lower your student loan interest rate or payment for PenFed student loans? Find out if refinancing your loans is the right option for you.

READ MORE
3 Obstacles That Can Affect Financial Aid for Immigrants

As a legal U.S. immigrant, you’re eligible for federal assistance for college. But applying for financial aid for immigrants can be challenging.