Why the Australia Student Loan System May Have the Right Idea

The Australia student loan system differs sharply from the one in the U.S., and those differences are telling.

For example, U.S. student loan borrowers who use the standard, 10-year repayment program will have their monthly payments remain the same for the life of their loans, even as their income fluctuates. Essentially, it’s like a mortgage payment.

But such is not the case with the Australian student loan system, where income determines repayment.

To get a handle on these important differences, let’s take a deeper look at:

How student loans in Australia work

Under HELP, borrowers do not have to make any loan payments until their income reaches a certain threshold, and the figures are adjusted annually. Repayment for the 2020-2021 academic year begins at 1% of a borrower’s income once it reaches 46,620 Australian dollars (about $33,300).

After that, the repayment rate scales up based on how much the borrower makes. There are 17 additional income thresholds up to 136,740 Australian dollars (about $98,000), beyond which repayment is set at the maximum 10% of income. That means Australian college graduates who land high-paying jobs right out of school extinguish their debt quickly, and those whose income remains low have a lower student loan repayment obligation.

As a result, a given Australian college grad extinguishes their education debt within eight to 12 years, according to a 2018 New York Times report. In the U.S., the average time it takes to repay student loan debt varies from 17 to 20 or more years, depending on factors such as: 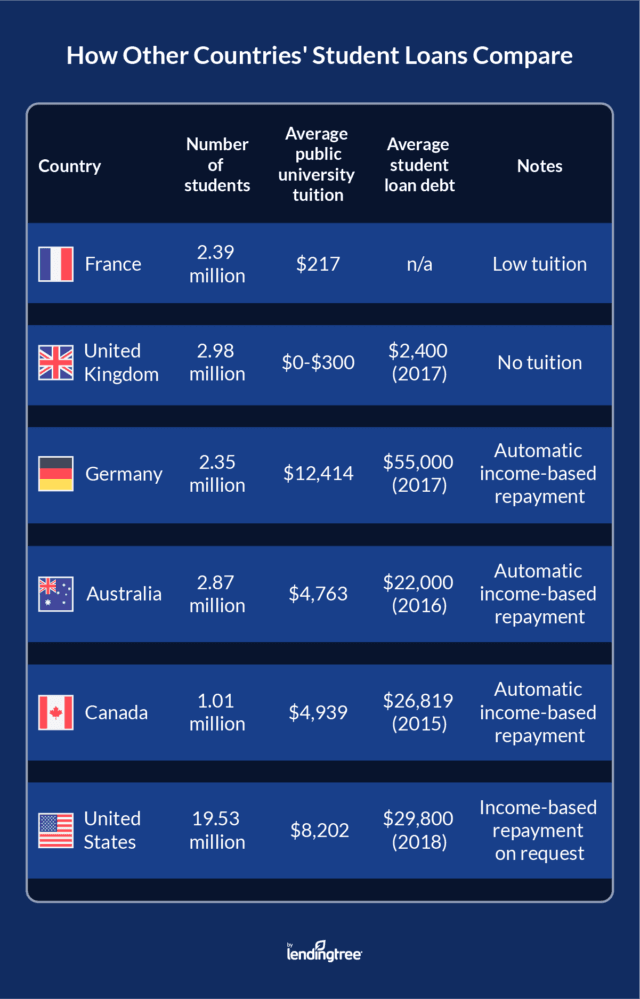 Information above was gathered by LendingTree, based on rates and currency conversions as of Aug. 6, 2019, unless otherwise specified.

Emulating the Australia student loan system in the U.S.

There’s one important thing to note about the U.S. student loan system: When President Lyndon B. Johnson signed the Higher Education Act of 1965 — which, among other things, provided financial assistance to students — fewer people pursued college degrees, and tuition was much cheaper than it is today.

Johnson had good intentions in creating these educational programs, but he probably couldn’t have predicted just how expensive college would get within a few generations. And although the law has been amended since its initial passage, the size of America’s student loan debt crisis suggests more changes are needed. (For more on the scope of U.S. school debt, check out our student loan debt clock.)

In fact, the differences between the U.S. and Australia in the price and scale of higher education pose a major obstacle to bringing Australia’s system here. In Australia, taxes are a slightly larger share of the country’s gross domestic product, and Australia also has a much smaller population than the United States does.

“To roll out [a program like Australia’s HELP] across America would be a massive economic impact because of the size of the population and the vast number of educational institutions,” said Michelle Hutchinson, a personal finance communications executive and graduate of Macquarie University in Sydney, Australia.

Mimicking the Australia student loan system in the U.S. could lighten the burden on borrowers, but it would take a large infusion of money first to roll out programs like HELP.

“The economy will benefit but it would be a medium- to long-term gain if it did that,” Hutchinson said.

Members of Congress and candidates for the White House in the U.S. have increasingly campaigned on proposals to reduce college costs and make student loans easier to repay. Some have even proposed making all public colleges free or eliminating existing student debt. But only time will tell whether any of these plans are enacted, or whether the U.S. can move to a more Australian way of dealing with student loans.

For more international coverage beyond Australian student loans, check out:

Our MPOWER review finds a student loan lender that doesn’t require cosigners or credit history, and is helpful for international students.

READ MORE
Your Guide to Student Loan Forgiveness for Teachers

Explore our guide to student loan forgiveness for teachers, where we break down available options that could help teachers get out of debt.

This Sallie Mae student loan review will walk you though the pros and cons of borrowing from them, along with other key details.