A LendingTree survey of over 1,000 undergraduate students found that nearly half admitted to spending more than they could afford on a spring break vacation. And more than 1 in 5 borrowers reported taking out extra student loans to finance their spring break activities.

Nearly half of college students have overspent on spring break

Nearly 1 in 3 college students are planning to vacation with friends this spring break. Among those traveling, 43% will go to a beach in the U.S., while just over 1 in 10 will head to a beach abroad.

On average, college students expect to spend around $620 on spring break, with senior-year students planning to spend the most, at almost $760.

But this price tag isn’t necessarily within students’ budget, as 45% of survey respondents (including 54% of senior-year students) said they had spent more than they could afford on a spring break trip at least once during their college career. 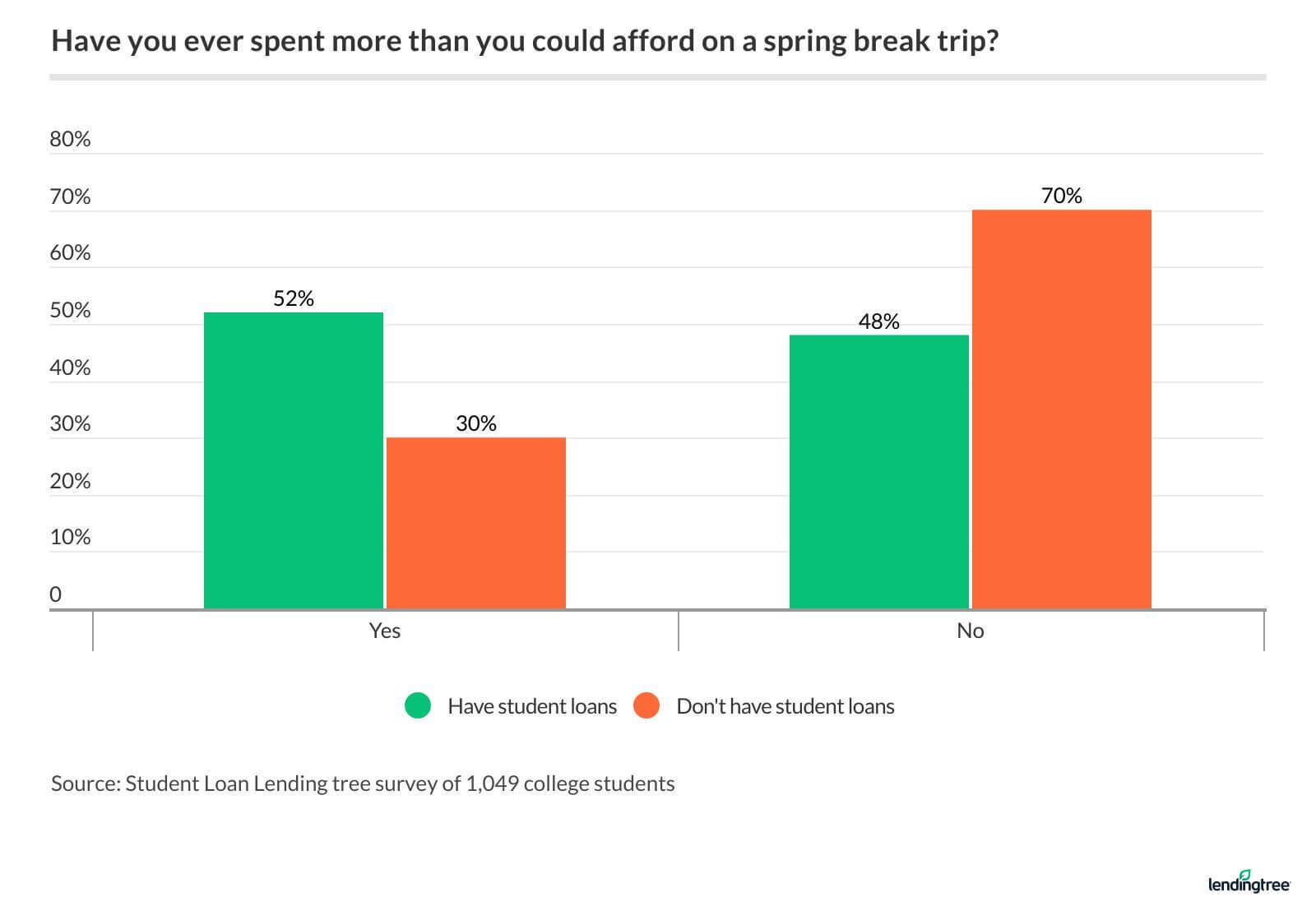 Despite the high price tag, most students value spring break as a time to unwind. Among those who spent more than they could afford, 68% said their reason was simply to have fun.

Meanwhile, 33% said they overspent on their spring break because they “didn’t want to feel left out,” and 39% said the trip seemed like a once-in-a-lifetime experience.

One in four students said they hadn’t expected to spend as much as they did, but 25% also said their trip was worth the debt. 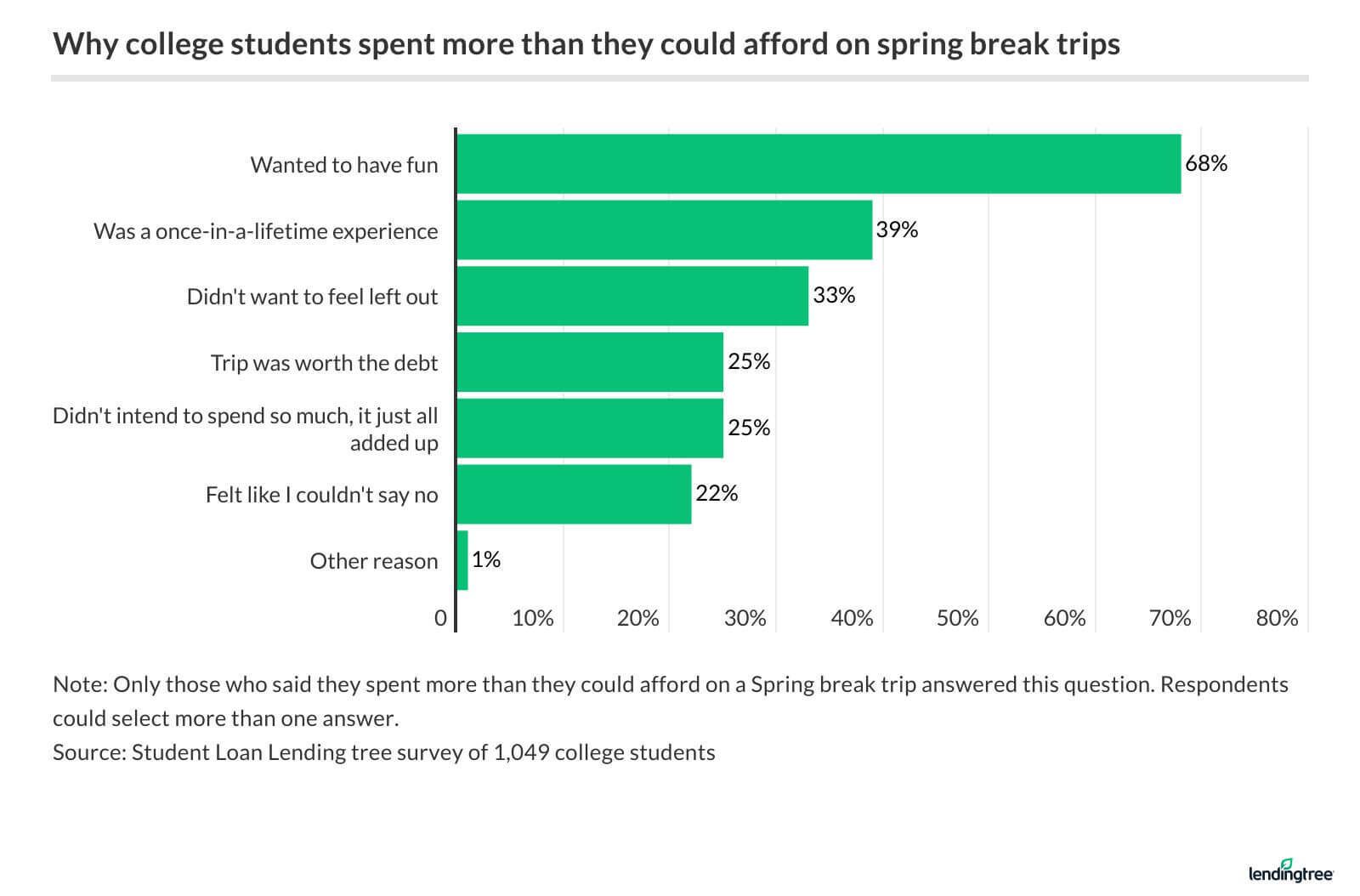 Student loan borrowers were especially likely to anticipate credit card debt, with 29% saying they thought they would incur debt, as opposed to 15% of their student loan-free peers.

Some student borrowers take out extra loans for spring break

Along with credit cards, student loan borrowers have also relied on student loan money to pay for spring break costs. In fact, 22% of borrowers said they’d taken out more loans than they needed to fund their trips.

The biggest spring break expenses are food and plane tickets

On average, these borrowers said they had previously shelled out about $1,200 of their student loan money on spring break.

Among those who planned to use student loan money on their upcoming break, 69% said they would use at least some of it to buy food, 44% said they would buy plane tickets, and 43% cited entertainment.

Hotel rooms or Airbnbs, shopping and alcohol or drugs were also big spending categories, with 42%, 34% and 22% using their loan money to cover those expenses, respectively. 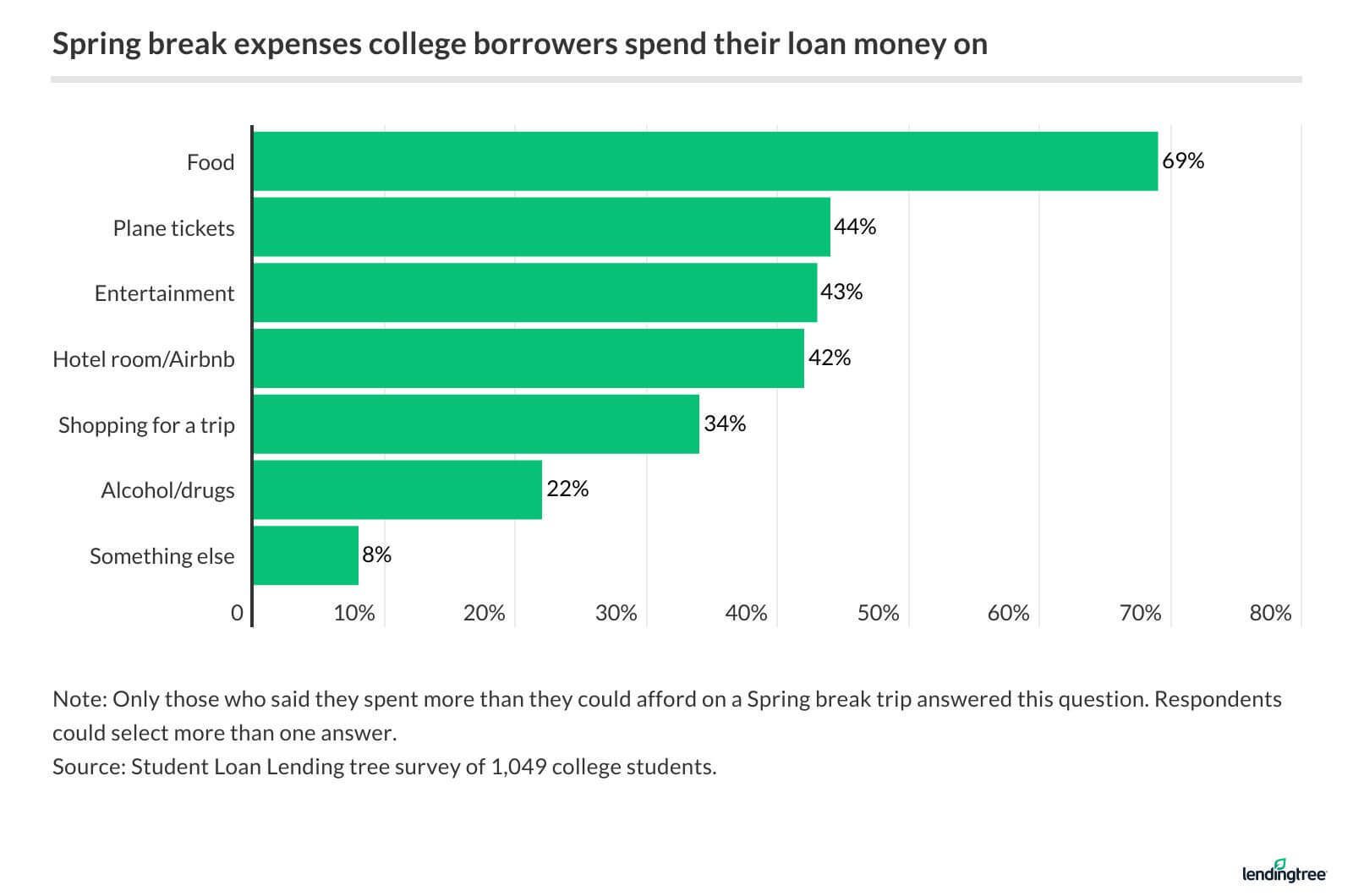 Many students turn down spring break due to the cost

While some students are using credit cards or student loans to pay for spring break travel, the majority are skipping spring break due to the expense.

Among all respondents, about 80% either “completely” or “somewhat” agreed with the statement “it seems like everyone else at college is doing something fun for spring break, but I can’t afford it.” Student loan borrowers were especially likely to feel this way (84% vs. 74% for non-borrowers).

Among all students, 51% said they’d been invited to do something for spring break but turned down the invitation due to financial constraints. Here too, student loan borrowers had to turn down plans more often than their debt-free peers, with 57% reporting that this had happened versus 39% of non-borrowers.

A word of caution about taking on debt for spring break

Spring break can offer a reprieve from hectic studies. It is an opportunity to let loose and decompress. But you might regret the expense in years to come if you take on debt to pay for it.

Because of compounding interest, you’ll end up paying more on your student loans than you originally borrowed (especially with unsubsidized loans). So that $620 to $760 spring break trip could potentially cost you more money after you graduate.

The same goes for credit card debt, which usually carries higher interest rates than student loans. So even though the price tag might not seem so bad today, it could balloon in the months and years to come.

If you’re determined to go on spring break, the following steps to save money:

You might also consider an alternative spring break experience, such as volunteering through an organization that provides scholarships to cover your expenses.

LendingTree contracted with Qualtrics to conduct an online survey of 1,049 undergraduate college students. The survey was fielded Feb. 10-18, 2020.

What Is an FSA ID and Why Do I Need It for FAFSA?

Changes are ahead for student loan borrowers with the release of the new FSA ID, which replaces the Federal Student Aid PIN. Here’s what you should know.

Income-driven repayment (IDR) plans can be a huge help, but note that the government requires you to recertify your plan annually. Here’s how to do it.

Exit counseling teaches you how to pay back your student loans. Here are some key points and pitfalls every borrower needs to know.