It’s no secret that millennials are swamped with student loan debt. While more millennials have obtained bachelor’s degrees than those in generations past, they also borrowed the most to earn those degrees. As of 2018, outstanding student loan debt in the U.S. surpassed $1.48 trillion, almost one-and-a-half times what Americans owe on credit cards.

According to an analysis of Federal Reserve data by MagnifyMoney (which is owned by LendingTree), all this debt is hampering millennials’ chances for long-term financial success.

And while it’s likely that those without student loans tend to include more people from wealthy homes, the massive disparity between those who owe and those who don’t suggests that educational debt can supercharge the difference in income.

If you’re a millennial, your financial journey since graduation has probably been an uphill battle. Here’s how student loan debt has held your generation back, along with our advice on how to conquer your debt once and for all.

The wealth divide between households with student loan debt and those without it has been widening over the past few decades.

That difference had nearly tripled by 1998, when under-35 households with student loan debt had a net worth 36% less than their debt-free peers. The former had an average net worth of $68,687, while the latter held an average of $108,146.

In 2016, the gap had grown to 75%, with student loan-saddled millennial households having an average net worth of $29,087, compared with $114,376 for student loan-free households. In other words, millennials unburdened by student loans held over $85,000 more than those who still had debt from college or graduate school.

Even though a college degree typically leads to a higher-paying job, the student loans that often go with it can significantly undermine your ability to build wealth after graduation. 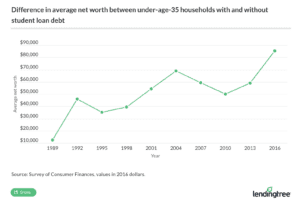 If you’ve got student loans, you know those payments can be a struggle to make month after month. According to our analysis, millennials with student loans are putting a significant amount of their paychecks toward their debt — leaving them with less money in the bank.

In fact, holders of student loans had 46% less in their savings and checking accounts in 2016 than millennial college graduates without debt. The former group had a median bank balance of $5,500, while the median for other millennial grads was nearly twice that, at $10,180. 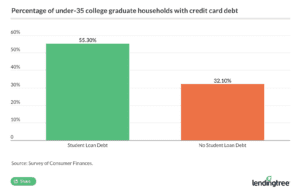 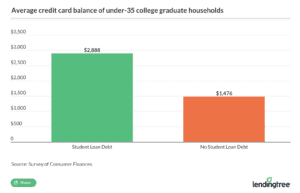 If student loan bills are eating up a big part of your income, you might use credit cards to finance big purchases. But credit card debt tends to be even harder to pay off than student loan debt because of high interest rates and the temptation to overspend. Caution is key when it comes to paying with plastic.

Student loans get in the way of saving for retirement

Considering that millennials with student loans have less money in the bank, it should come as no surprise that they also have less saved for retirement. After all, once you’ve paid your student loan bill and other recurring monthly expenses, you might not have much left over to contribute to your 401(k), individual retirement account (IRA) or other nest egg account.

When it comes to preparing for the future, the earlier you can start, the better. Thanks to the power of compound interest, any amount you can set aside today can grow significantly over time.

Student loans seem to be an obstacle to homeownership

When it comes to buying a home of their own, millennials can encounter many challenges.

The high cost of rent is one of them, with nearly 21 million households paying more than 30% of their income on rent, according to Harvard’s Joint Center for Housing Studies. While rent costs have gone up, wage growth has remained stagnant, even for those with college degrees. This makes it all the more difficult to save for a down payment and other costs associated with buying a home.

And student loans create further obstacles, resulting in lower rates of homeownership among millennial graduates with student loans (34%) than among those without (36%). Those who have managed to buy a home end up with a lower-value home and a bigger mortgage, compared to their contemporaries who don’t carry education loans.

What’s more, homeowners with student loans had to take on even more debt to buy their homes, possibly because they weren’t able to save as much for down payments. Their median mortgage was $104,000, versus $98,000 for those without student loans.

Not only does student loan debt get in the way of buying a home, but it also forces millennials to take on even more debt to realize their goal of owning a home.

Get proactive about reducing your student loan burden

Although you might feel you got tricked into taking on debt at a young age, burying your head in the sand about your student loans will only make a difficult situation worse. Instead of giving up hope, try to get proactive about paying off your debt.

If you can make extra payments, you can get out of debt faster and save money on interest. Create a budget to see if you can spare any extra cash each month. Look for areas where you can cut down on spending. Some people even take drastic steps, such as downsizing their apartment or selling their car, to get rid of debt as fast as possible.

If you’re working, find out what steps you can take to get a pay raise. Or consider changing jobs altogether to boost your salary. Alternatively, you might take on a side hustle, such as driving for Lyft or running errands for TaskRabbit, to increase your income and throw that extra money toward your loans.

You can also look into state-based and private programs that offer student loan repayment assistance for your private or federal student loans. And some employers even offer a student loan matching benefit to help you pay off debt.

Finally, some borrowers could benefit from refinancing their student loans. If you have decent credit and a steady income — or can apply with a cosigner who does — you could qualify for a lower interest rate than what you have now, as well as choose new repayment terms. As a result, refinancing could save you money on interest and help you pay off your student loans ahead of schedule.

Whatever you decide, make sure you’re being strategic about the best way to manage student loan repayment. Even though student debt has held back millennials in major ways, there are steps you can take to overcome this obstacle and reclaim your financial freedom.

Methodology: We examined the Federal Reserve’s Survey of Consumer Finances to compare households headed by someone under age 35 with student debt versus those without. All monetary amounts are expressed in 2016 dollars (the date of the latest survey).

Looking for student loans? Here’s your guide to all the federal student loan types out there, as well as how to apply for them.

READ MORE
Are Student Loans Bad or Good Debt? Here’s What You Need to Know

Juno seeks to save you money with better rates on student loans by using collective bargaining. Here’s our review of their service.