You are using an outdated browser. Please upgrade your browser to improve your experience.
News
How Does LendingTree Get Paid?

Technology can simplify things when it comes to money. You don’t always have to carry your credit card, you can invest from your phone and you can get an overview of your finances with minimal effort.

These are some of the ways connecting your bank account to other platforms can be helpful. And many are embracing the convenience it affords. In fact, 58% of consumers are linked to another platform or service, according to the latest survey of more than 1,000 Americans from LendingTree. But there can be downsides to this, too. Data breaches, for example, can quickly turn a convenience into anything but that.

To understand how people are using connected accounts, the survey also looked at the reliance on budgeting apps, reactions to data breaches and demographics on who’s using these features.

The survey also asked how people who have at least one connected account use those services: 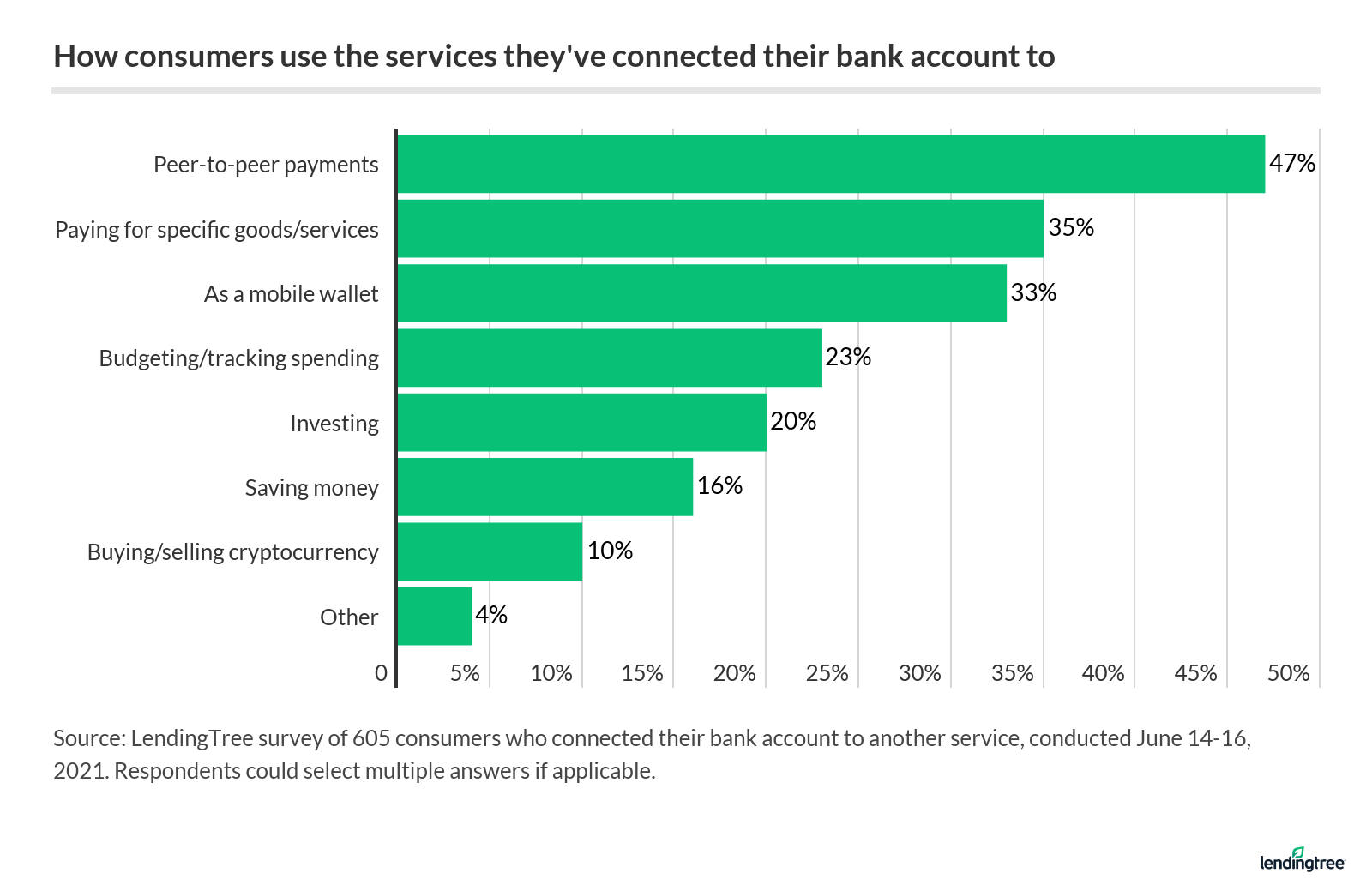 “Many money management apps like Mint.com are simply ‘read-only’ and can be invaluable when it comes to tracking your money and having a big picture of your finances,” she says.

Would you conduct your banking through a connected app if you could?

Given the general convenience of these kinds of payment apps, it makes sense. Once set up, you don’t have to know banking information (like routing and account numbers) to transfer funds to other people. They’re often free to use. And you might even find a reminder feature built into these apps. These allow you to keep track of payment requests more easily, like getting reimbursed for an Airbnb booking.

“What worries me about connecting your bank to another platform is, of course, the security issue,” Mangla says. “While peer-to-peer apps are generally safe, you are assuming some risk when you use them. And anytime you’re giving your login credentials to another site or app, you are further exposing yourself to a certain amount of risk.”

The survey also looked at whether a data breach resulted in disconnecting from compromised apps. Most (about two-thirds) say they didn’t unlink their account: 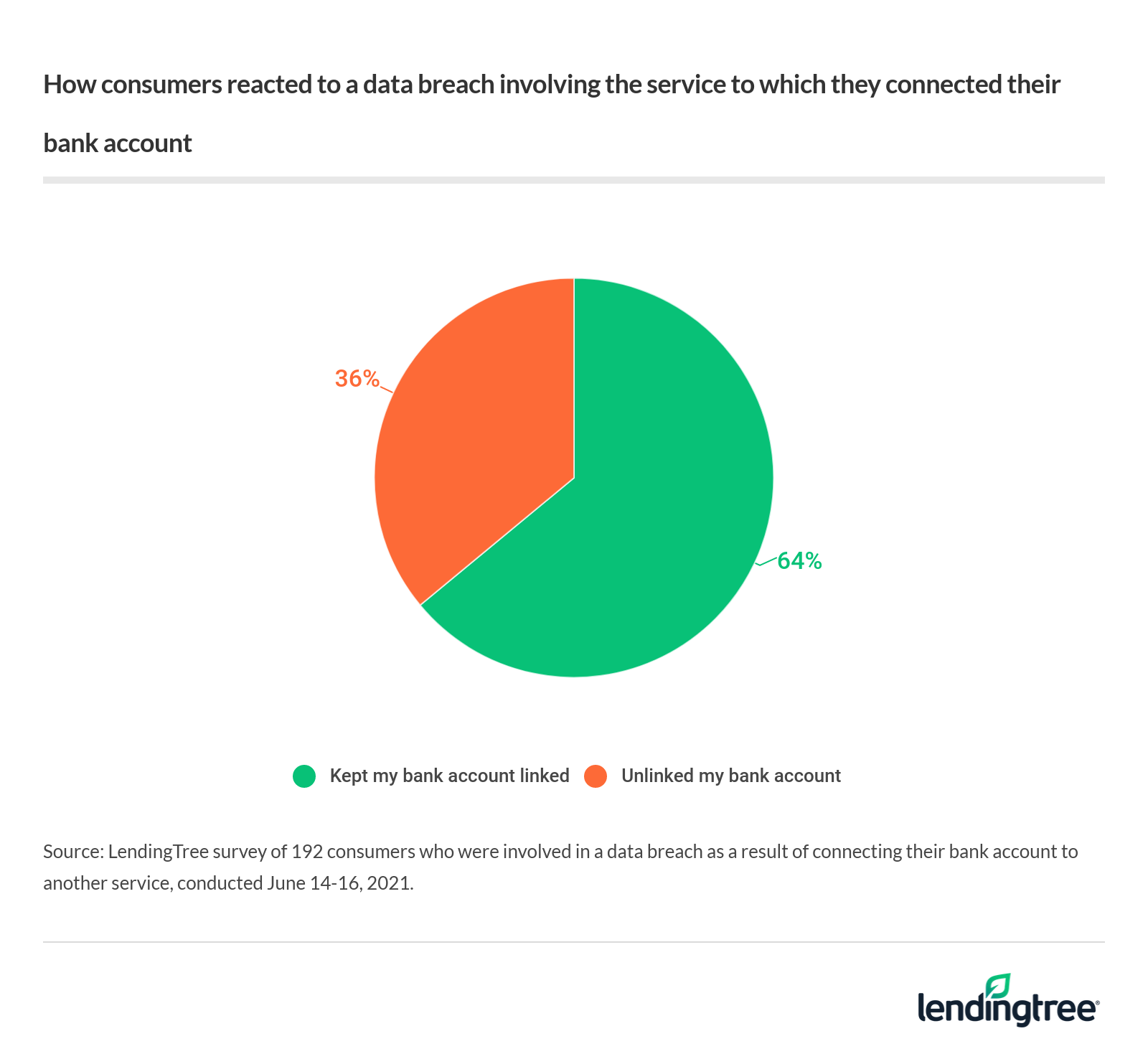 Assuming you still use — and find value in — a connected app, it’s best to take swift action after a data breach:

If your Social Security number is compromised, you may also want to consider a credit freeze to prevent others from opening new accounts in your name.  If you aren’t using the connected app, deleting your account is also a good idea. Companies may also offer assistance in dealing with the fallout of a data breach, like identity theft. If your personal details are leaked, it’s worth considering.

On this note, the survey also found that 68% of consumers say concerns about data privacy keep them from connecting their bank account to potentially helpful apps or services. And those earning between $75,000 and $99,999 (78%) and Gen Zers (74%) are warier of this than others.

Financial mobile apps and the services that consumers crave the most

By a wide margin, fraud alerts are the most desirable feature among financial apps: 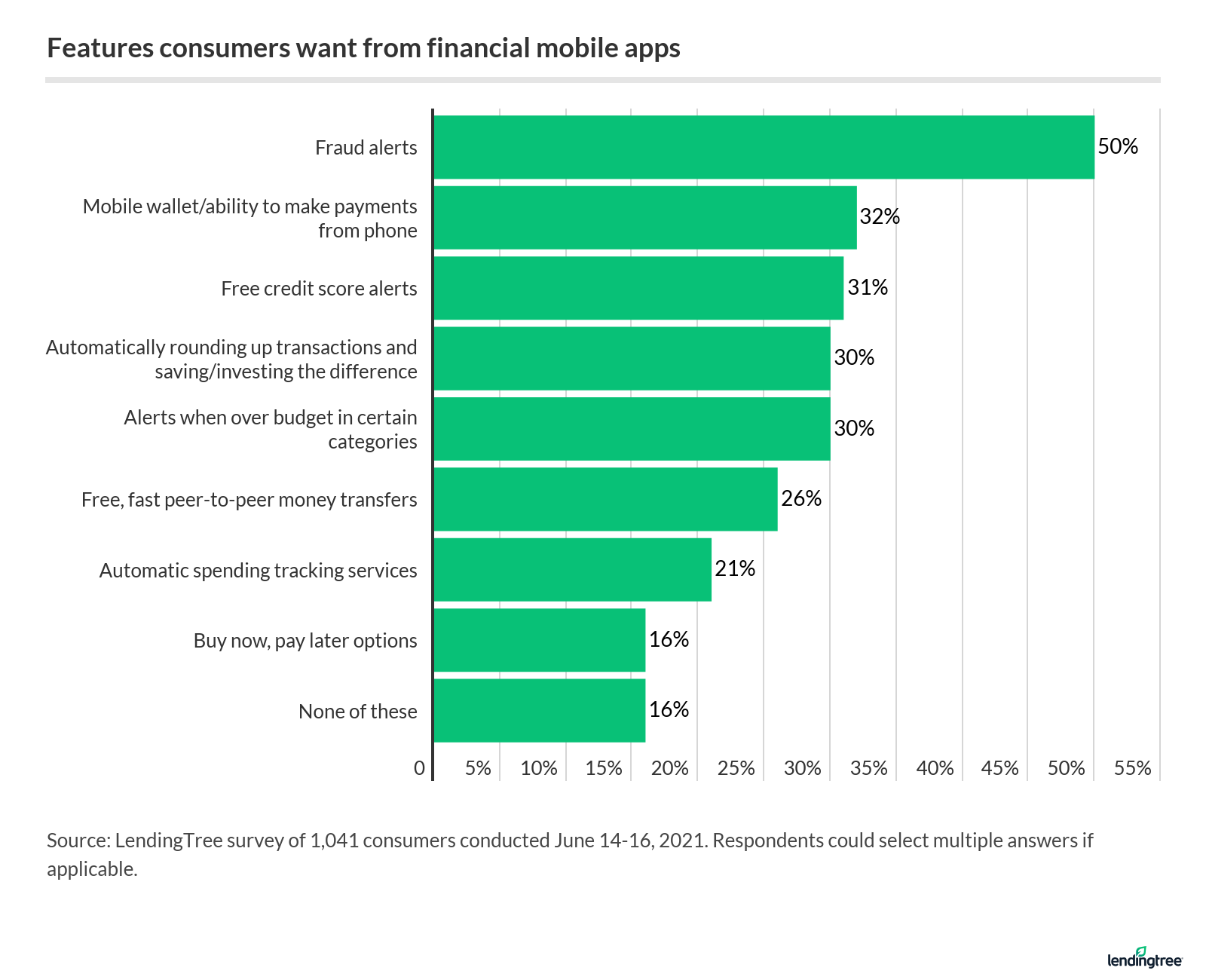 Interestingly, while half of respondents are interested in fraud alerts, only a quarter of Gen Zers are.

“Financial apps can be a huge help,” says Matt Schulz, LendingTree chief credit analyst. “We’ve all got to-do lists that are 100 miles long, and if we can use technology to help us keep everything straight, we absolutely should. These apps are especially useful when you’re just getting started with credit and managing your money.
“For example, seeing a big drop in your credit score for no apparent reason can be a sign that you’ve recently been a victim of identity theft. Apps like ours at LendingTree can help you spot those changes quickly so you can do something about them.”

Thirty-nine percent of respondents agree that budgeting apps are critical to help them stay on top of their finances. And some demographics took to this idea in greater numbers:

“There’s no one-size-fits-all answer for how best to manage your budget,” Schulz says. “Whether you prefer pencil and paper, Excel spreadsheets or the latest budgeting apps, they can all be super-effective. It’s all about knowing yourself and how you like to do things. That said, many of these budgeting apps offer tools to help streamline your processes and can make things much easier on you.”

And while older Americans tend to be less interested in these kinds of tools (just 21% of baby boomers say budgeting apps are critical to their financial management), Schulz says they would be well-served to embrace this technology.

“I understand some of the concerns that folks may have, but the truth is that this technology really can make managing your money easier — and that’s a pretty big deal,” he says.

Where is banking heading from here?

For many, the coronavirus pandemic brought the problems of brick-and-mortar banking to the surface, emphasizing the importance of virtual options like those afforded by connected apps. So it makes sense that more than a third (36%) of consumers say they would be excited if their bank teamed with a big tech company like Google or Apple. 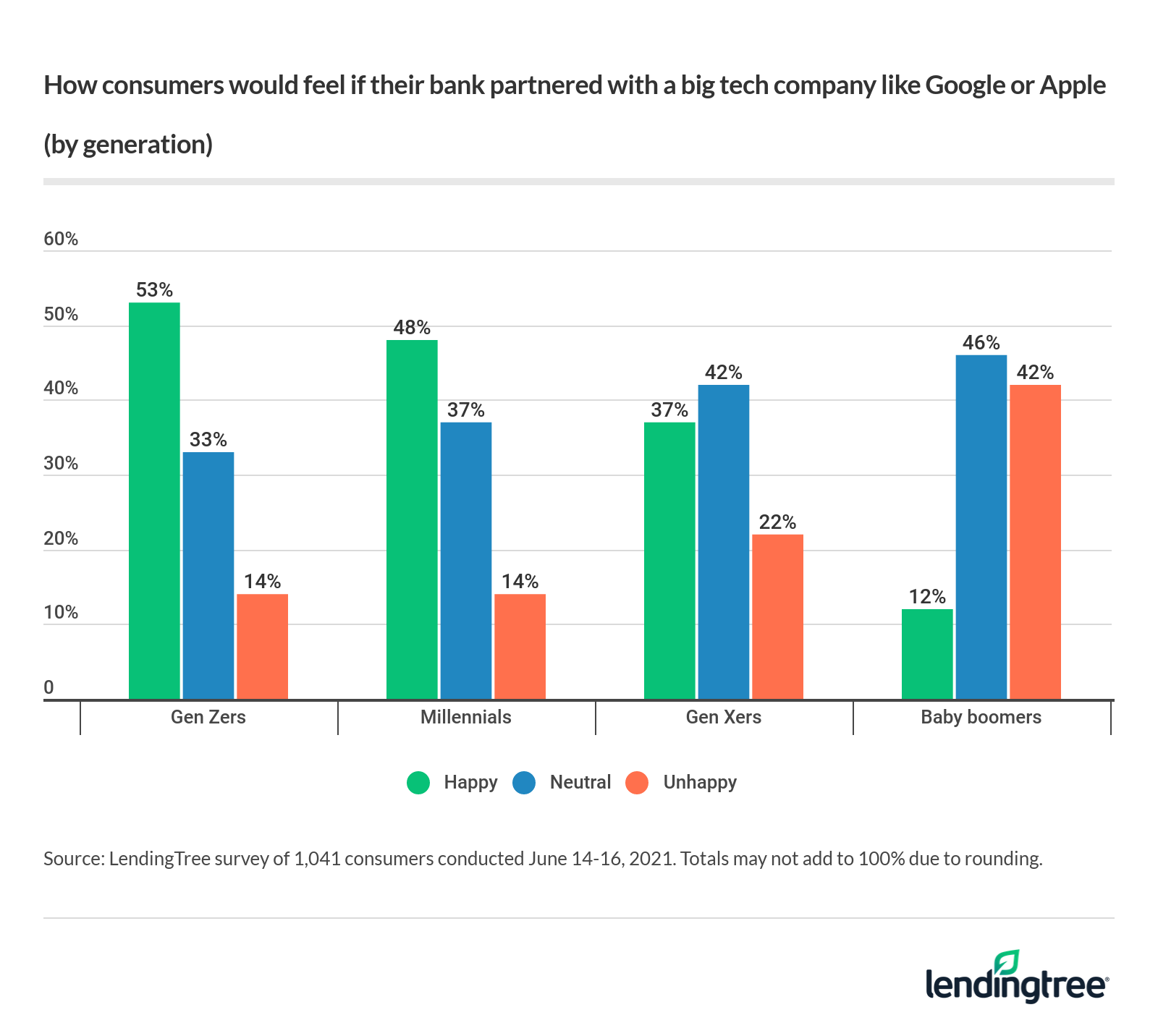 The survey also looked at traditional versus fintech banking attitudes, finding that 27% would prefer the latter option, but the majority preferred sticking to a traditional bank.

Following the established trends, younger folks, as well as men and high earners, are generally more likely to be interested in fintech banking than their counterparts. For example, 39% of millennials and 36% of Gen Zers express interest, versus 8% of baby boomers.

The options afforded by connected bank accounts often come with trade-offs: The potential for security risks via data breaches versus the convenience of paying back your friend instantly, and getting a better feel for your budget. And as we move toward an increasingly more connected world and more people embrace these kinds of technologies, it seems that it’s a trend that’s here to stay.

LendingTree commissioned Qualtrics to field an online survey of 1,041 Americans, conducted June 14-16, 2021. The survey was administered using a non-probability-based sample, and quotas were used to ensure the sample base represented the overall population. All responses were reviewed by researchers for quality control.