You are using an outdated browser. Please upgrade your browser to improve your experience.
Business LoansBusiness Funding
How Does LendingTree Get Paid?

Venture Capital Financing: Is It a Good Idea for Your Business?

Uber, WeWork and Airbnb started with an infusion of venture capital financing, and those businesses continue to make billion-dollar investment deals as their valuations rise.

Although your startup may not skyrocket to similar levels of success, you may be interested in securing investments to get up and running. While banks and other lenders are often hesitant to loan money to new businesses, some startups are prime candidates for venture capital financing.

High-risk, fast-growing businesses tend to be most attractive to venture capitalists, who either invest individually or as part of a private equity firm, said Angelo Santinelli, an entrepreneurship professor at Babson College in Massachusetts. Venture capitalists typically look for companies that can provide a quick and substantial return on an investment.

If your startup is in this category, we’ll try to help you determine if venture capital financing is the right funding choice for your business.

What is venture capital financing?

Venture capital is a form of equity financing, which can be obtained in exchange for ownership in the company. Rather than borrowing from a bank or alternative business lender and paying back your debt, you could receive money from an investor who would help expand your business while earning a share of the profits.

Venture capital funding is typically for early-stage companies with potential for high growth. Venture capitalists, or VCs, invest in these startups with the expectation that the risk will result in significant returns as the businesses become successful.

VCs invest on their own or on behalf of equity firms that make major investments in new businesses. A traditional VC would typically make an investment of $5 million or more, while an investment from a micro VC usually ranges between $500,000 and $2 million.

Businesses that operate as C corporations are most likely to be candidates for venture capital financing since many VCs do not invest in LLCs or S corporations for tax purposes. A C-corp structure allows investors to avoid pass-through taxation on business income and buy and sell stock more easily.

Venture capital is typically invested during five stages of the business’s life:

When a VC makes an investment, the business owner receives the funds in a lump sum, Santinelli said. During each stage, you would determine how much funding is necessary to bring your business idea to fruition. You would receive the money upfront and then seek additional funding as the business moves into different stages, he said.

Venture capital financing can be a risky arrangement for both business owners and investors. VCs typically invest in quite a few businesses with the expectation that several will fail, Santinelli said. They look for companies that could have a big payoff to offset the anticipated loss.

How to secure venture capital financing for your business

From your first VC meeting to payday, here’s a look at what you can expect when seeking venture capital financing. 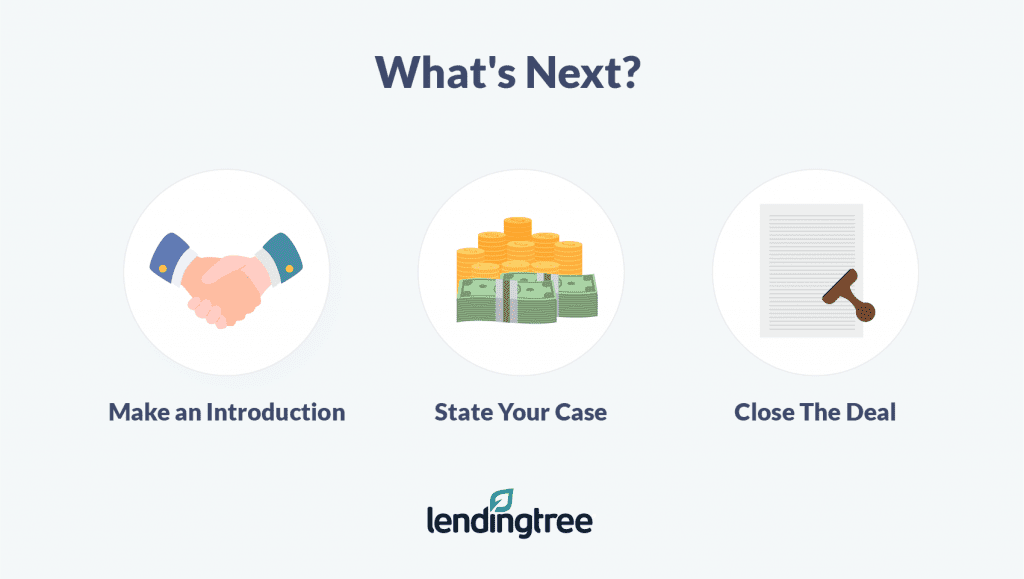 VCs are typically inundated with emails containing business plans from hopeful entrepreneurs, Santinelli said. Instead of cold-calling or emailing an investor or VC firm, it’s best if you can find someone to make an introduction. You could search online for other business owners in your industry who have received investments from the VC you’re eyeing.

“Find the investors that are actively investing in your area of business and look for a warm introduction,” Santinelli said.

You might consider hiring an advisor or consultant who could help you find a VC, Santinelli said. VCs often rely on advisors to provide information about business owners who have already been researched and vetted.

“VCs have to be ruthless with their time,” Santinelli said. “The things that get noticed are the things that come through trusted advisors.”

Before a VC decides to invest in your company, they’ll review the details of your operation. You can expect a VC to look for an experienced team, a large addressable market and an engaging product and vision.

You should also present a pro forma statement to show how much money you’re trying to raise and why, Santinelli said. A pro forma statement outlines how the company’s performance and results would change if investors put a certain amount of money into the business.

Review the term sheet and close the deal

If you’re trying to obtain financing from a VC firm, you may meet with several people before the deal is done, Santinelli said. You could first meet with an associate, who may then set up a meeting with a partner of the firm, who could then ask you to make your pitch in front of a larger group of partners, he said.

Santinelli likened the process to dating — after the first few dates, you would be invited to meet the family; then, eventually, you may start planning a wedding. With VC financing, the financing deal would be the wedding and the term sheet would function somewhat like the prenuptial agreement, he said.

Although the term sheet usually is not a legally binding document, it would outline the basic terms of the investment and what is expected of both parties. The term sheet would likely include the amount of money being offered, the percentage of the company being exchanged and any conditions or investor demands. The expected date of the investment would also be included.

After reviewing the term sheet, you’d sign a number of legal forms to close the deal, including:

Keep in mind that the process of closing the deal would be indicative of how the relationship with the VC would be going forward, Santinelli said. If there are issues, either party can walk away before the final documents are signed.

“Oftentimes, business owners will say they don’t like the way the deal is going,” he said. “If you can’t remedy that, you should vote with your feet and walk away.”

Before bringing in investors, consider both the benefits and disadvantages of obtaining venture capital financing.

VCs prefer to invest in businesses that are in large, fast-growing markets to quickly gain a sizable share of the company, Santinelli said. That’s why innovative tech companies like Uber or Lyft are able to raise such a great amount from VCs, he said.

If your business isn’t going to be the next Uber, that doesn’t mean you can’t secure venture capital financing. VCs also invest in knowledgeable business owners who show the ability to build strong teams, Sanitinelli said.

“I often hear VCs say, ‘I’ll invest in a B idea with an A team,’” Santinelli said. “The right team can sometimes make a B idea an A idea.”

Once you accept VC financing, those investors then have a say in business decisions. Investors also own a stake of the company — most VCs require at least 20% ownership of the business, Santinelli said. They become strategic advisors to the business and will likely challenge your decisions.

“If you don’t want to be second-guessed, don’t raise venture capital,” Santinelli said. “They are there to push back.”

Besides taking ownership of the business, VCs may include a vesting clause in your agreement, Santinelli said. A vesting clause would require you to stay with the business for a certain number of years before you become eligible to receive the full value of your share.

“They don’t give you money and not have you on the hook to stick around,” he said. “Vesting is that hook.”

Unfortunately, many small businesses don’t demonstrate the potential sought by VCs, Santinelli said. Rather than seeking venture capital financing right away, Santinelli suggests that most startups should seek other business financing and focus on building positive cash flow.

“For most small business owners, unless you’re in that high-risk, high-reward industry, most would be better off getting money from friends and family or local bankers,” Santinelli said.