Countless Americans hope daily for a return to normalcy, even though what we consider normal may not return any time soon  — or at all. It’s especially true for small business owners. In fact, 4 in 5 New Orleans small business owners think it’ll take at least four months for business to return to normal, if at all. This is up from just more than 3 in 5 amid the first COVID-19 wave.

LendingTree researchers used U.S. Census Bureau Small Business Pulse Survey data from the 50 largest metros to see where business owners’ outlooks have changed the most since the pandemic’s first wave. We specifically looked at small businesses that think it’ll take at least four months to recover, as well as those that don’t think they’ll return to normal or have already closed.

We also looked at national sentiment, including operational challenges, financial stress and expected recovery. Here’s what we learned.

Gloomy expectations rise most in New Orleans, San Antonio and Birmingham, Ala., amid 2nd wave

Across the 50 metros, an average of 70.9% of small businesses believe it’ll take at least four months to recover — if at all. And, in general, small business owners had a gloomier outlook for the future during the second wave than during the first. This was the case in 34 metros, where expectations worsened between waves. (In another six, expectations remained the same.)

New Orleans, San Antonio and Birmingham, Ala., small business owners experienced the largest shift in expectations between the first and second COVID-19 waves. Between the end of April and the beginning of December, the perception that it would take at least four months to recover increased in those metros by at least 16 percentage points.

In fact, New Orleans reinstituted Modified Phase One on Jan. 8, which sets a 25% capacity at many businesses, including:

New Orleans relies heavily on tourism, so additional restrictions — including indoor seating being prohibited at bars and breweries and indoor live entertainment being banned at these establishments — can contribute to the gloominess from small business owners. This is especially true during Mardi Gras season, though Orleans parish parades have already been canceled for 2021.

Wylie noted that she isn’t surprised so many business owners aren’t feeling hopeful for the future. “Conditions continue to change, and entrepreneurs continue to adapt, but operating in a constant state of uncertainty is surely exhausting,” she said.

If small business owners choose to stay open, Wylie believes they’ll need to remain as flexible as possible and come up with new revenue streams.

“Continue to save as much money as possible,” she said. “Don’t be afraid to try something new and to abandon any strategy, service or product that is not serving the business.”

While many cities aren’t optimistic about the future of small businesses in their area, expectations did improve in 10 of the 50 largest U.S. metros:

While it’s difficult to pin down why some metros are more optimistic than others, government support certainly doesn’t hurt.

“Many cities across the U.S. offered similar resources to struggling entrepreneurs, and it’s important for small business owners to see what funding may still be available in their area,” Wylie said.

Sacramento, Calif., and Phoenix were the next most optimistic cities. Like business owners in Charlotte, entrepreneurs in Sacramento and Phoenix had access to local funding opportunities, including California’s Small Business COVID-19 Relief Grant Program and the city of Phoenix’s Small Business Resiliency Grants Program.

Where businesses stand nationally, from operational challenges and financial stress to expected recovery

The Census Bureau Small Business Pulse Survey tracks four indexes, each of which focus on different topics. These findings can begin to give an idea of where small businesses stand: 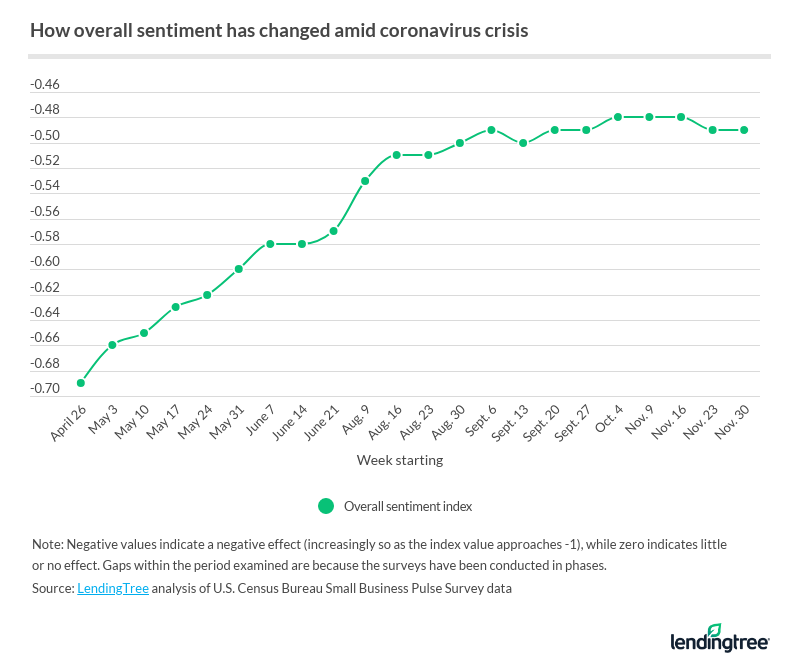 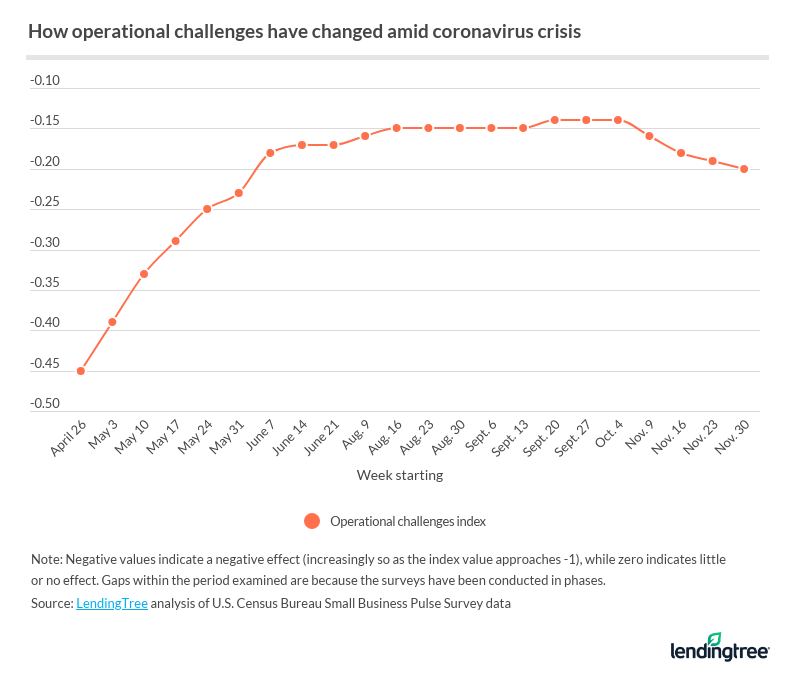 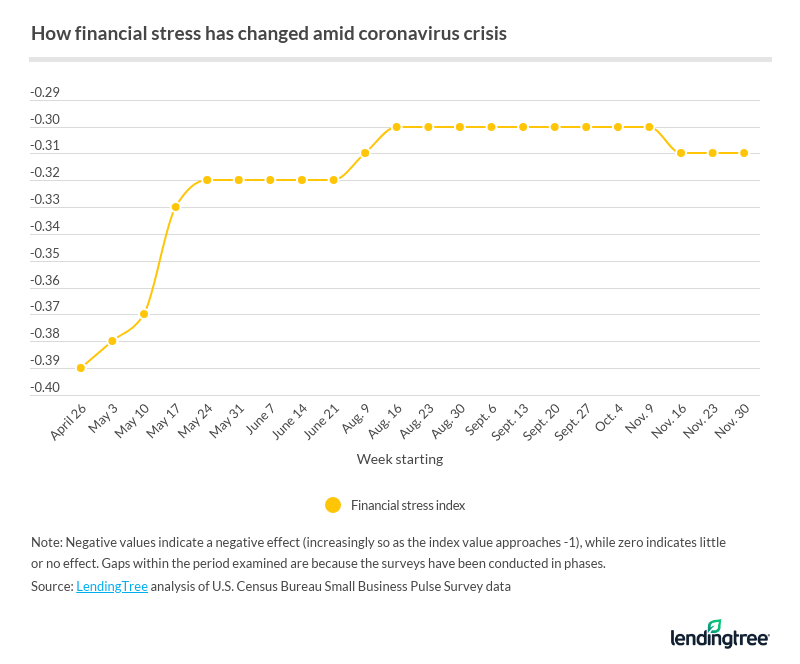 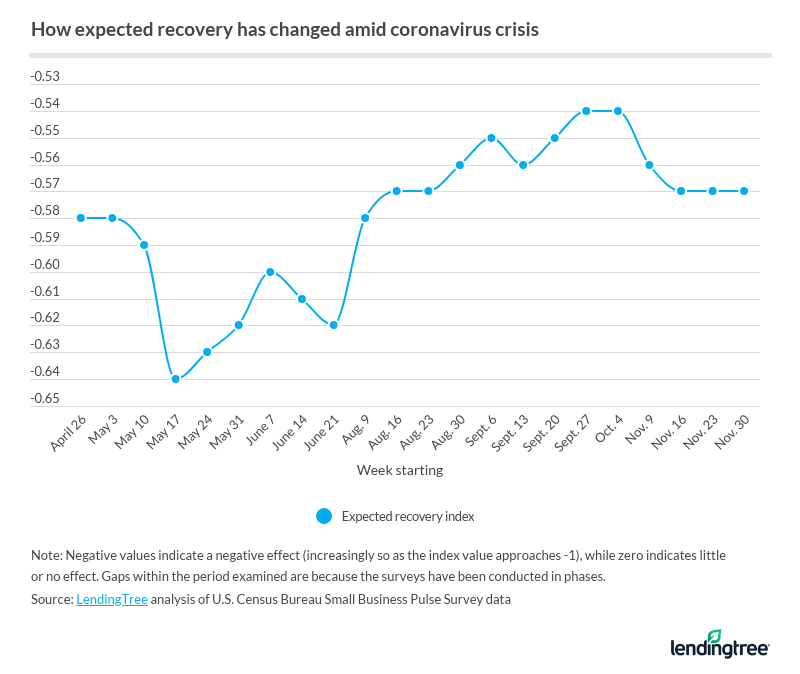 4 changes small businesses can still make to adapt to pandemic

We compared U.S. Census Bureau Small Business Pulse Survey data collected between April 26 and May 2 — the first wave — to data collected between Nov. 30 and Dec. 6 — the second wave. We calculated the percentage of businesses in each period that said it would take at least four months to return to normal operations. For the first period, we included businesses that said they’d never recover. For the second period, we included businesses that had permanently closed, in addition to those that said they’d never recover.