As the effects of the new tax law begin to take shape, some small business owners may find their taxes decreasing in 2018.

Under the new law, the owner of any “pass-through” business entity, which includes sole proprietors, partnerships, LLCs and S-corporations, is able to deduct 20% of their income from federal income taxes. Under the previous tax code, owners were taxed on the entirety of their income. Small business owners also have the ability to write off interest on loans, as well as the full cost of new equipment. And for those businesses that do not fall under the “pass-through” umbrella, the tax on corporations fell to 20%, from 35%.

In a new survey of 1,000 small business owners, LendingTree found the majority of small business owners (65%) expect to see savings as a result of the new tax law, and most plan to use that savings for business debts. The survey was conducted via Google Consumer Surveys March 29-31.

Here’s what we found:

When asked what they plan to do with their tax savings, more than one-third (35%) of respondents said they would pay down debt. 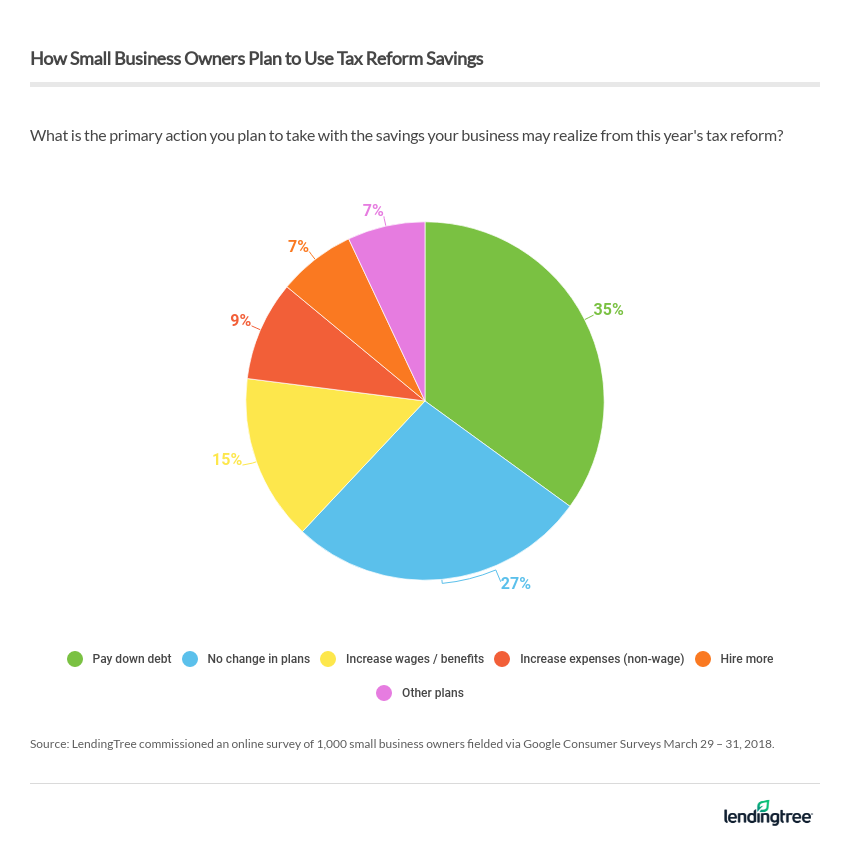 Entrepreneurs feel the weight of debt

It’s hard to blame business owners for earmarking their tax savings for debt. Nearly half of the small business owners we surveyed (46%) said they have business-related credit card debt. Of those with business debt:

While more than half (55.7%) of small business owners tapped their personal savings to start their business, roughly one-quarter (27%) relied on debt.

Among owners who borrowed funds for start-up costs, about 12% took out a business loan, 7.5% used credit cards, 6% used a personal loan and 1% used a home equity loan. 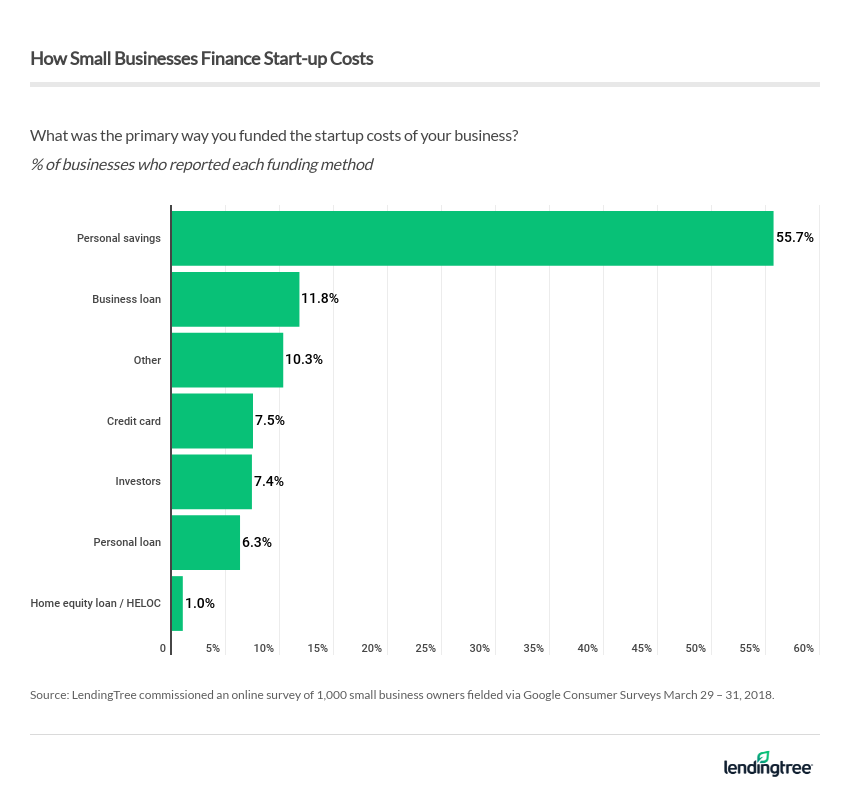 The good news is their funding needs weren’t so great that any decent-sized nest egg would be put at risk.

More than half of business owners who responded to the survey said they started with less than $10,000. For the majority of entrepreneurs, their start-up costs didn’t exceed four figures: 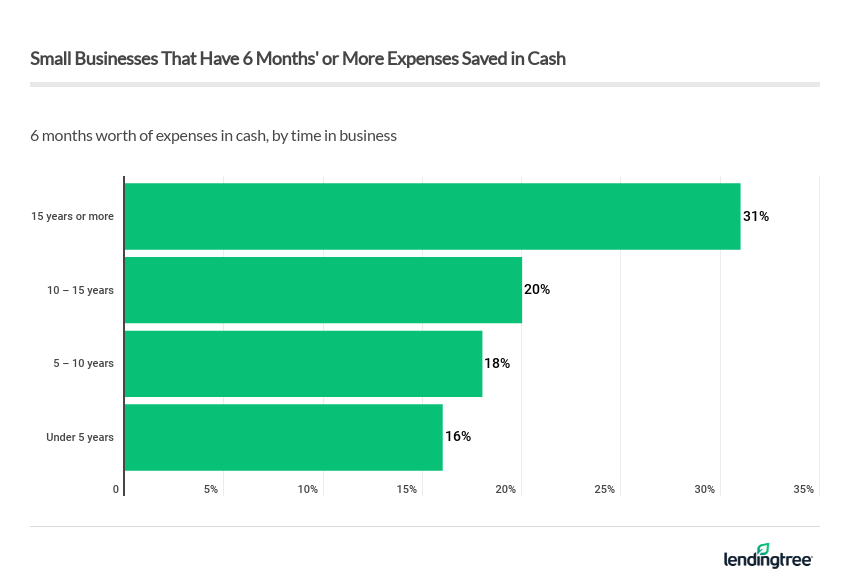 It’s generally recommended for small business owners to stash at least three to six months’ worth of savings for leaner times. We found 55% don’t meet that bar.

Tax savings would come in handy for the 80% of small business owners who report having less than six months’ worth of expenses on hand in cash.

Even more strapped for cash, 70% have no more than three months’ worth of cash on hand and 21% of small business owners don’t have a reserve for even one month’s expenses.

Here’s a breakdown of how many months’ worth of money business owners have available:

Older businesses are more likely to have an emergency fund

How business owners can prepare for tax season 2018

President Donald Trump signed the American Tax Cuts and Jobs Act in December, the most sweeping tax reform legislation passed in a generation. Among many changes for corporations and individual taxpayers, the bill also introduced new ways for business owners to save.

The majority of tax reform changes went into effect at the beginning of 2018. Here are some tips on how business owners can change up their tax strategy ahead of next year’s tax filing season:

Consider increasing your W-2 withholdings. For entrepreneurs who work a traditional nine-to-five job and run their own business on the side, Helena Swyter, a Chicago-based tax consultant for small businesses and owner of Sweeter CPA, recommended increasing withholdings at work to cover what they’ll owe in self-employment tax on their side business. To have more taken out of each paycheck, owners could drop their number of allowances, change their marital status to “married but withhold at a single rate,” or choose a custom amount for the employer to hold at the end of each pay period, Swyter said.

“It will probably result in them setting aside too much money, but that’s never a bad place to be,” she said. “Everyone would like to get a refund.”

File your taxes quarterly. Many small business owners or self-employed workers already follow this strategy — and for good reason, too. Filing quarterly taxes throughout the year helps small business owners avoid getting hit with a large lump sum tax bill in 2019, Swyter said. Quarterly payments are based on earnings made during the periods of January through March, April through June, July through September and October through December, according to the Small Business Administration.

To submit quarterly tax payments, check out this guide from the IRS.

Send contractors 1099 forms. If you pay an independent contractor at least $600, you must send them a 1099 form before Jan. 31 of the following year. Art Steele, a Virginia-based small business tax and law expert, told LendingTree she advises her clients to send the forms to contractors immediately along with their invoice. Passing along forms throughout the year would help business owners avoid scrambling in January to get in touch with contractors, Steele said.

Don’t forget about the health care requirement. Before filing next year, business owners should be aware that they could be penalized for not providing qualified health insurance during each month of 2018. The provision of the Affordable Care Act requiring businesses with 50 or more employees to provide health care coverage doesn’t expire until the 2018 tax season, Swyter said.

“There’s definitely a lot of confusion out there” she said. Several of Swyter’s clients were under the impression that the new tax bill immediately upended the ACA’s health care mandate, but it remains in effect through 2018.

Small business owners who operate a sole proprietorship, LLC or an S-corporation are able to deduct any business expense from the total amount of money they made, as they have in previous years, Steele said, so there’s no incentive for them to itemize.

Most people would likely choose the standard deduction rather than itemizing, Swyter said, which would eliminate an itemized tax form and simplify their return.

“Most people are waiting to see how it pans out,” Swyter said.

As always, consult with a trusted tax professional or accountant throughout the year before engaging in any specific strategy. This material has been prepared for informational purposes only, and is not intended to provide, and should not be relied on for, tax, legal or accounting advice.

Nearly 1 in 5 U.S. businesses fail within the first year, according to the latest data from the U.S. Bureau of Labor Statistics.