About 7 in 10 Americans Have Cried About Money: Survey

If you’ve ever felt so moved by your financial situation that you cried over it, you’re far from alone. According to a recent survey by LendingTree, nearly 70% of Americans admit to becoming emotional over their finances.

While some say they’ve been moved to tears by joyful events, such as a financial windfall or treasured gift, many more Americans say that financially stressful experiences, such as a lost job, mounting debt or a pinched budget, were responsible for their weeping.

The survey’s findings underscore just how universal the experience of crying over money is for people — many of whom struggle with debt and limited budgets. “So many people’s financial margin for error is so slim that an unexpected car repair can be a real hardship,” said Matt Schulz, LendingTree’s chief credit analyst. “Then, if you factor in things like job loss or a medical emergency, that can make things even worse.”

Household debt has also soared in recent years, adding to the stress. According to the New York Federal Reserve, Americans collectively owe nearly $14 trillion to creditors.

Here are some of the most notable revelations from the LendingTree survey. 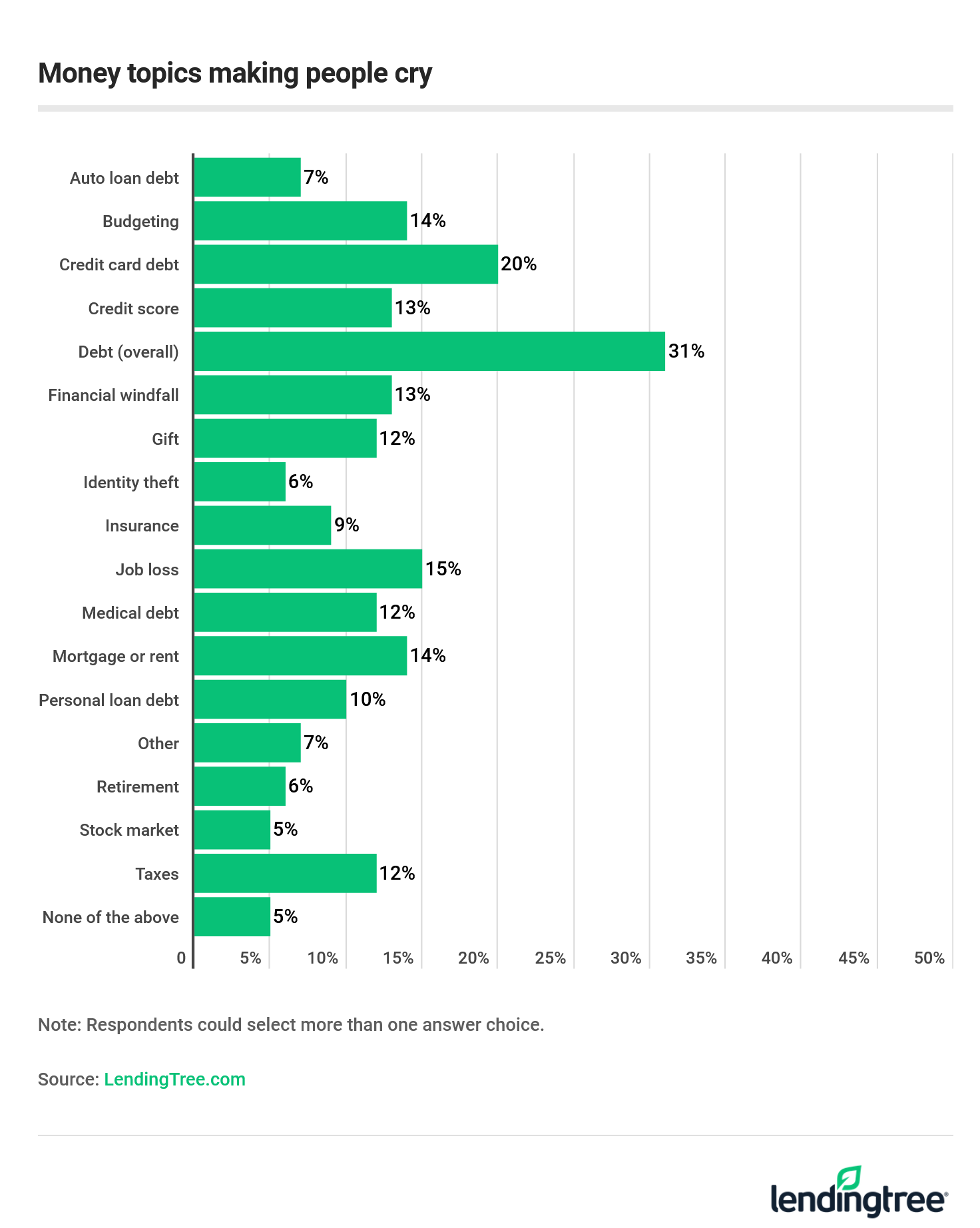 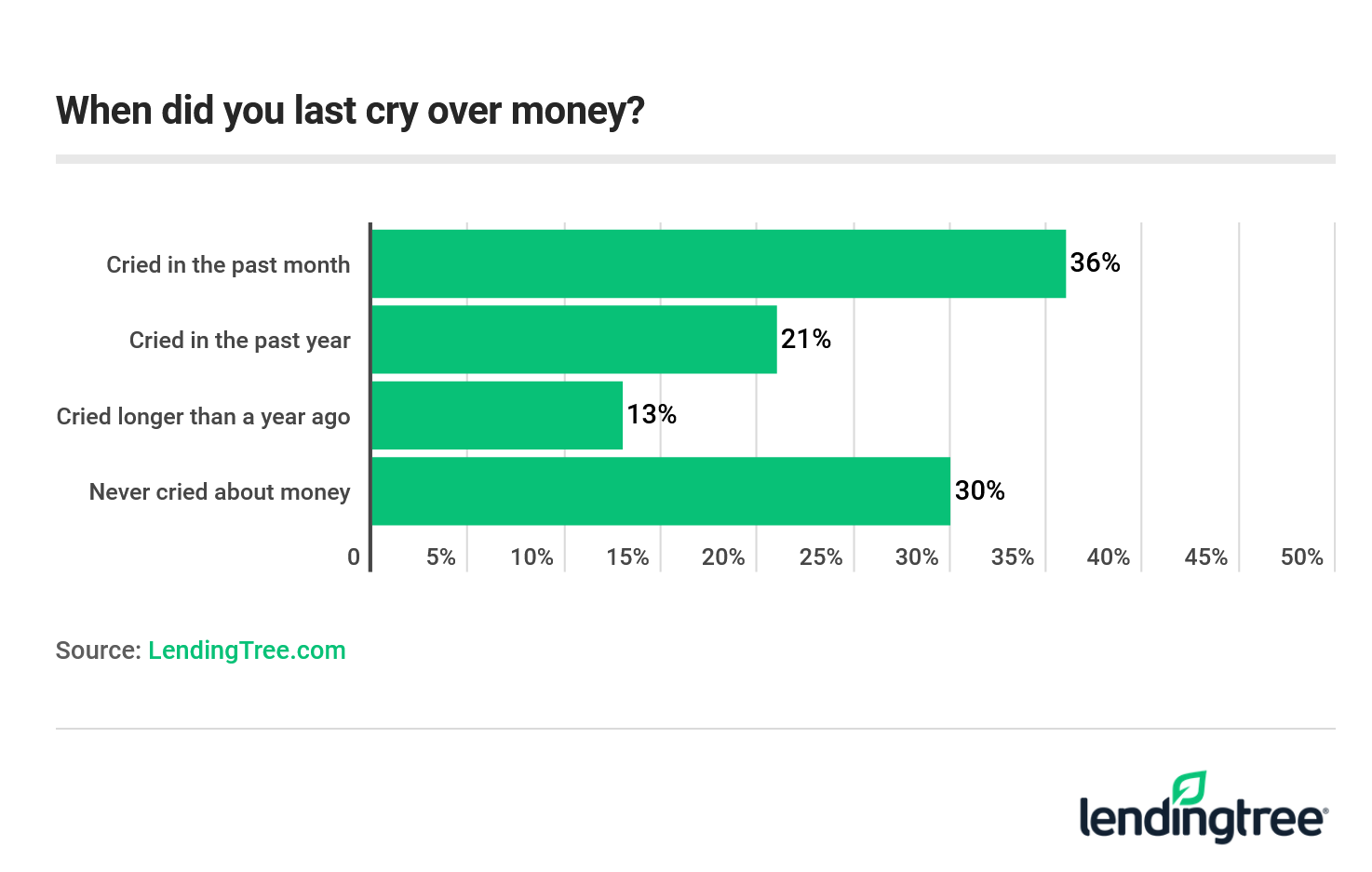 Young people in their 20s and 30s are much more likely than older generations to become emotional over money, the survey found ⁠— perhaps because many are dealing with more acute financial stressors, says Schulz.

Members of both Generation Y and Generation Z, for example, are more than twice as likely as baby boomers to have recently cried about their finances. They are also more likely to say that student loans, personal loan debt, auto loans or credit card debt have, at times, brought them to tears. In addition, millennials are significantly more likely than their baby boomer parents to say they’ve cried over their mortgage or rent payments.

“For Generation Z and millennials, it’s really a bit of a perfect storm,” said Schulz. Often, “they’ve got a lot of debt, don’t make a ton of money and don’t have a ton of experience with money. When you throw those things together, that’s a pretty scary combination.”

Many 20- and 30-somethings are also first-time parents and are raising kids on a limited budget, which may also be contributing to their stress. According to the LendingTree survey, for example, parents of minors are substantially more likely than other Americans to say they’ve recently cried over their finances.

Financial therapist Lindsay Bryan-Podvin says that parents are often more susceptible to financial stress because of the pressures they are feeling. Parents are not only responsible for raising and educating their kids; they also have to financially provide for them. It can also be hard to avoid scary-sounding headlines about the state of the economy, rising college costs and other financial stressors, she added. 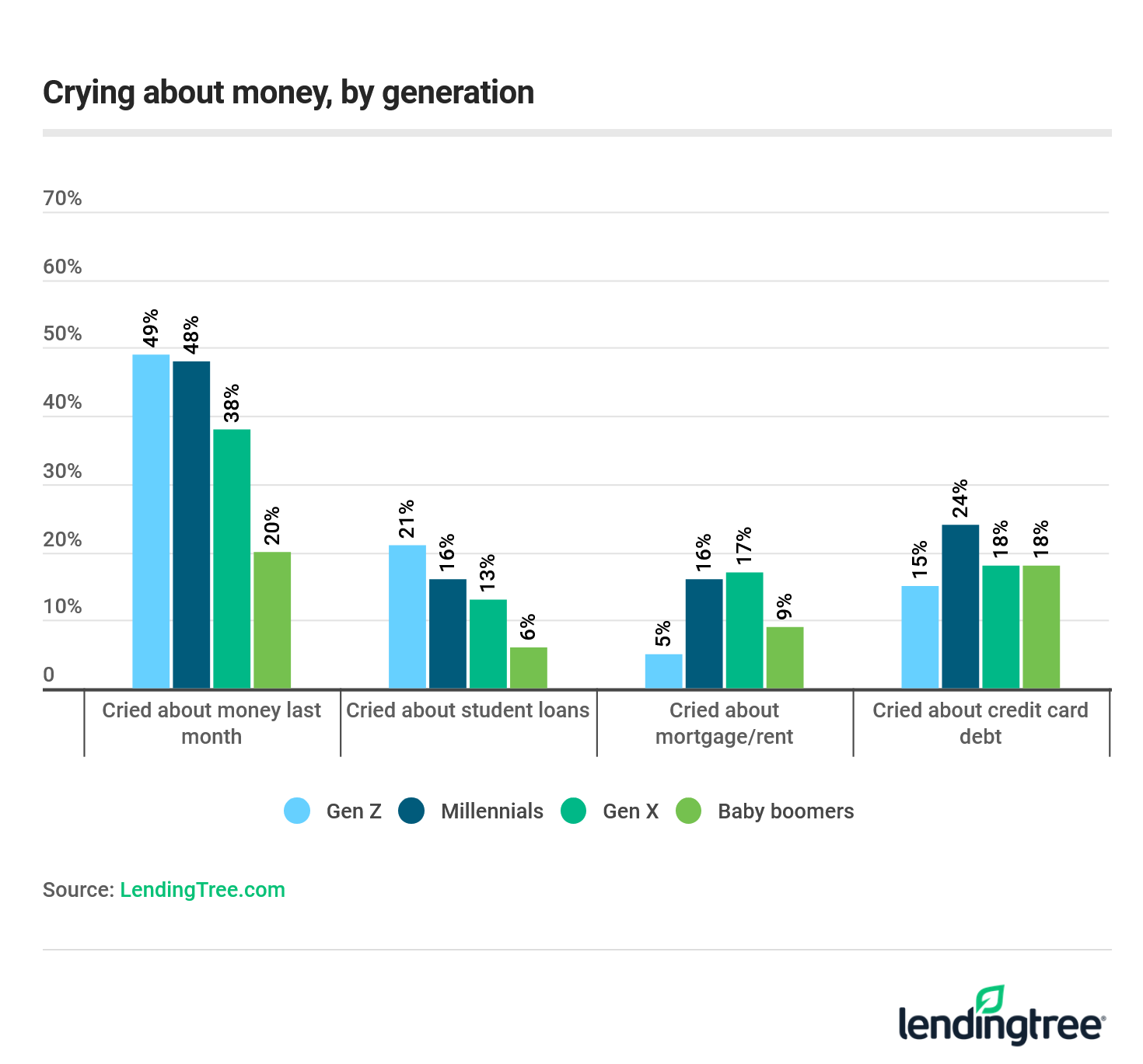 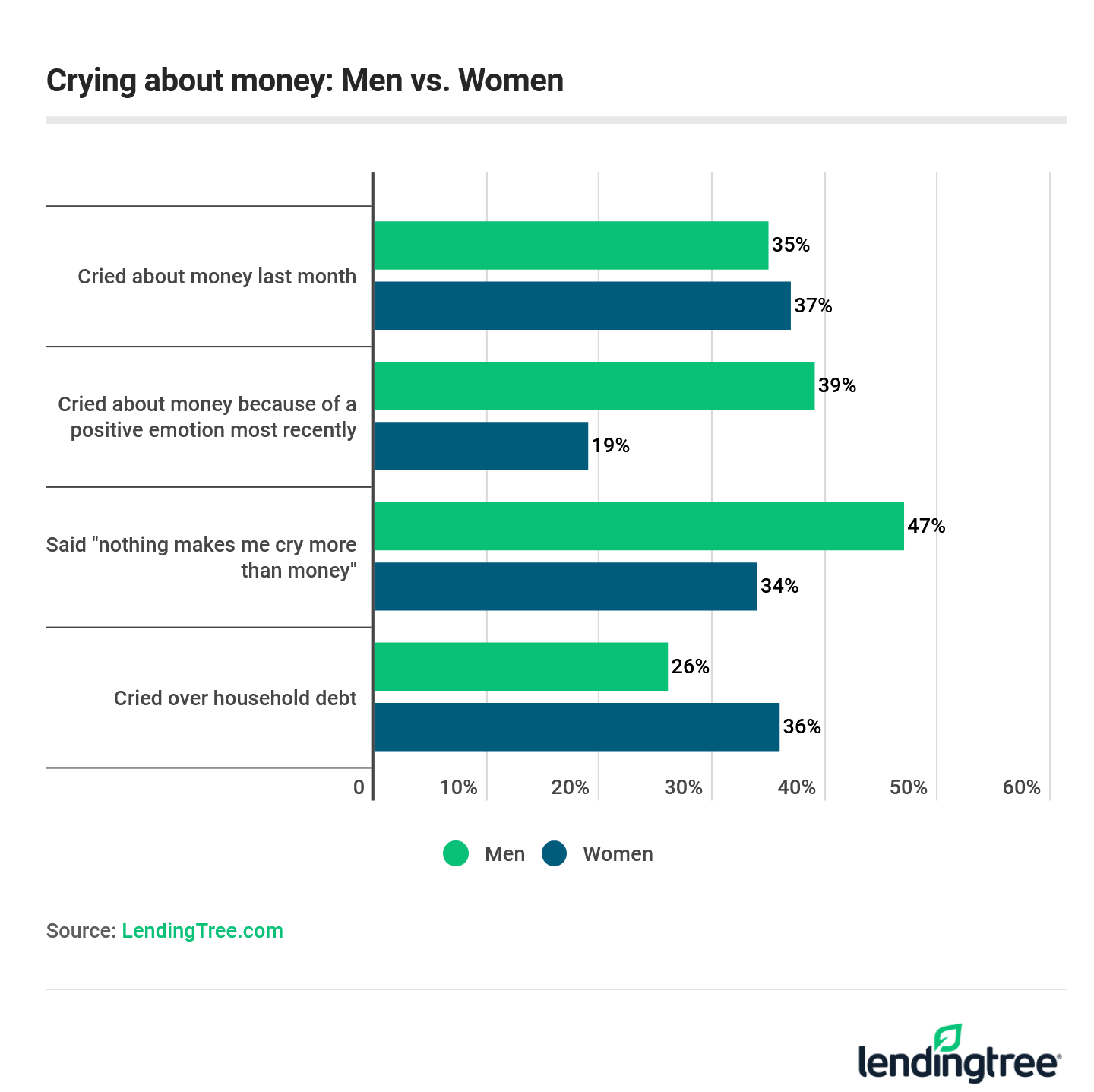 All kinds of debt lead to shedding tears

Debt worries also tend to differ somewhat by gender. For example, men are slightly more likely than women to have become emotional over student loan, car and credit card debt. Meanwhile, women are more likely to have cried over personal loans and mortgage or rent payments.

Several other financial stressors have also pushed people to tears, such as:

Meanwhile, 7% said they had other reasons for feeling emotional. Another 5% said that none of the common stressors listed had ever brought them to tears.

According to Schulz, many people feel unmoored by forces outside their control and, as a result, tend to become emotional about their finances. For example, they may feel as if they are working as hard as they can and yet, “they can’t get a break,” said Schulz. “They can’t make ends meet and they can’t get ahead.” When things feel out of control, it’s natural to feel emotional about it.

Among those who have cried because of money, most say they were brought to tears fairly recently. For example:

Not every respondent cried because they were feeling upset, though. A number of respondents said they were moved to tears by happy events that made their lives richer or less financially stressful. For example:

Take control of your debt rather than it controlling you

If your finances are continuing to cause you financial stress, there are a number of techniques you can use to help cope with your emotions and deal proactively with your money troubles.

For example, financial therapist Bryan-Podvin suggests asking yourself how true some of your worries are. Some of the worst-case scenarios you are imagining may be unlikely to come to pass.

If your worries have some validity, Bryan-Podvin suggests going deeper and asking yourself what you are doing to help combat or prevent them. For example, if you’re worried you’ll never get a raise, ask yourself how true that is and whether you’re doing anything to deserve a higher income.

It’s also helpful to acknowledge what you can and cannot change, says Bryan-Podvin, so that you can emotionally release the things outside your control. You can’t change the economy, for example. However, “you can make yourself a more desirable employee by getting additional training, asking for more responsibilities or asking your manager where they need more help,” she said.

Similarly, you can help yourself feel more in control of your debt by taking small steps to knock it out, adds Schulz. For example, you can call your credit card issuer to see if they’d be willing to lower your APR.

Or, depending on your credit score, you can transfer your balance to a card with an introductory 0% APR, refinance your mortgage or consolidate your debt onto a lower rate personal loan.

Talking with a credit counselor or financial therapist may also help you see your situation more clearly and come up with an action plan.

“Newton’s first law is critical here,” said Bryan-Prodvin. “An action in motion stays in motion. An object at rest stays at rest. If you are ruminating and worrying about things but not taking action, nothing will change.”

Don’t feel embarrassed if you’re occasionally brought to tears by your finances. Most people have cried over money at some point in their lives. However, if talking with loved ones and taking action to combat your money troubles isn’t making you feel better, you may want to seek professional help.

LendingTree commissioned Qualtrics to conduct an online survey of 1,004 Americans. The survey was fielded Sept. 5-9, 2019, with the sample base proportioned to represent the overall population.