More than half of Americans who’ve participated in a bridal party say they’ve felt pressure to spend above what they could afford, according to the latest LendingTree survey of more than 2,100 consumers.

“Weddings cost a fortune, even when you’re not the one getting married,” says Matt Schulz, LendingTree chief credit analyst. That can explain why half of bridal party members say they’ve wracked up credit card debt to afford their wedding obligations.

Learn more about the most costly wedding-related expenses and how much people are spending, as well as tips on how to manage bridal party costs.

Half of bridal party members say they’ve had to turn to credit cards to pay for wedding obligations, citing reasons from high expectations to travel to hefty price tags. 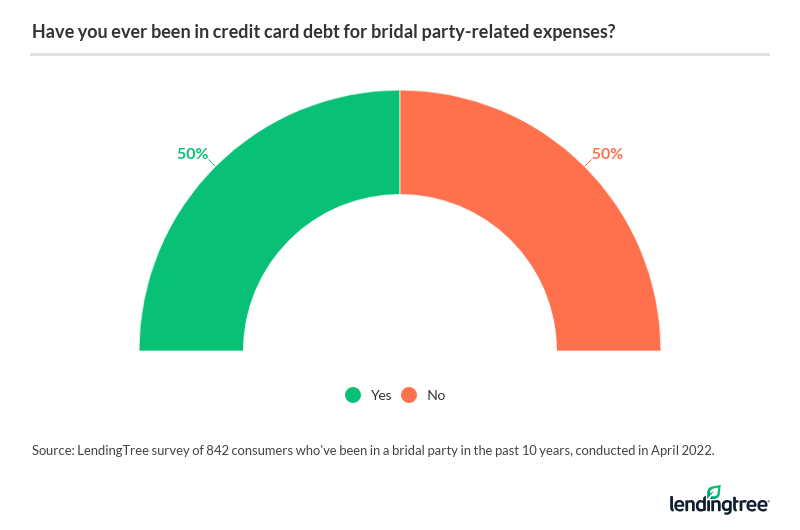 Also, a higher percentage of men have incurred credit card debt than women — 53% versus 47%.

Many people accept going into credit card debt for these events, with the pressure on them to do their part to make the day special.

More than half have felt pressure to spend above their means

In fact, more than half (56%) of bridal party members admit they’ve felt obligated to spend above what they could afford. For 39%, the overspending involved pre-wedding activities. 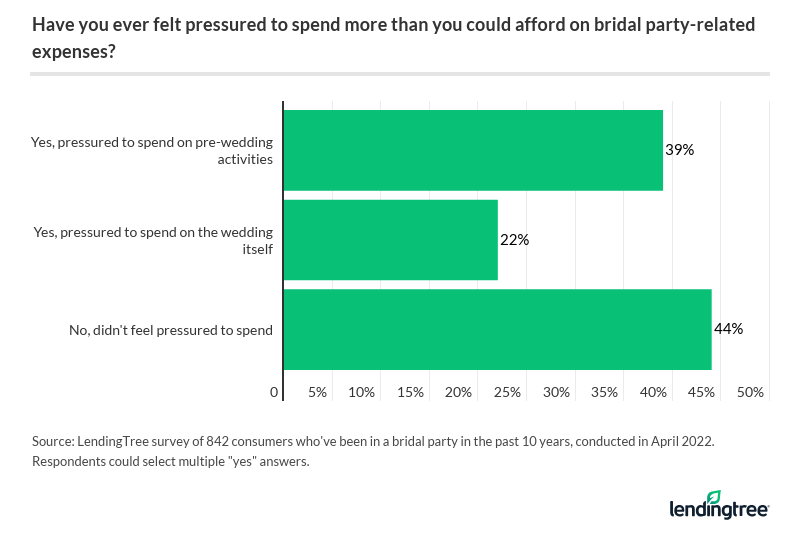 “People feel pressured to spend, in part, because they don’t want to be a killjoy or they just don’t feel like it is their place to say anything,” Schulz says. “That can make a potential bridesmaid or groomsman reluctant to speak up, even if the price of staying quiet is a fair amount of debt.”

Many people also understand how complex planning a wedding can be, so they don’t want to haggle about money and make things even more stressful for the bride or groom.

When asked about the source of the pressure, a slightly higher percentage of people chose themselves than the bride:

Gen Zers and Gen Xers highlighted greater pressure from themselves, while millennials cited the bride. Baby boomers cited themselves and the brides evenly.

Big spending leads to regret for some bridal party members

Nearly 4 in 10 bridal party members say they regretted how much they spent. There could be many reasons for regretting money spent while part of a bridal party, including if the costs ended up being far higher than they initially expected or if the person had a job loss or a medical emergency not long after the wedding and wished they hadn’t spent so much.

“If the marriage itself doesn’t last long, it is understandable that folks would wish they could have some of that money back that they’d spent,” Schulz says.

Another possible reason for all the regret? For those who’ve been in bridal parties over the past decade, about 1 in 10 reported that they’re no longer friends with the bride or groom. This rises a few percentage points to 11% among Gen Xers.

More than half of bridal party members (55%) have paid for a flight for some part of the wedding festivities, with the most popular reason being the bachelor/bachelorette party (27%). Expensive airfare is likely why these pre-wedding parties are the second biggest bridal party expense behind attire.

The bachelor/bachelorette party can be super-pricey, and, often, that’s the hardest thing to say no to, Schulz says.

“The problem is that everyone’s financial situations are different,” he says. “And if the bride or groom has champagne plans while some of the bridal party has a cheap-beer budget, it can cause real tension.” 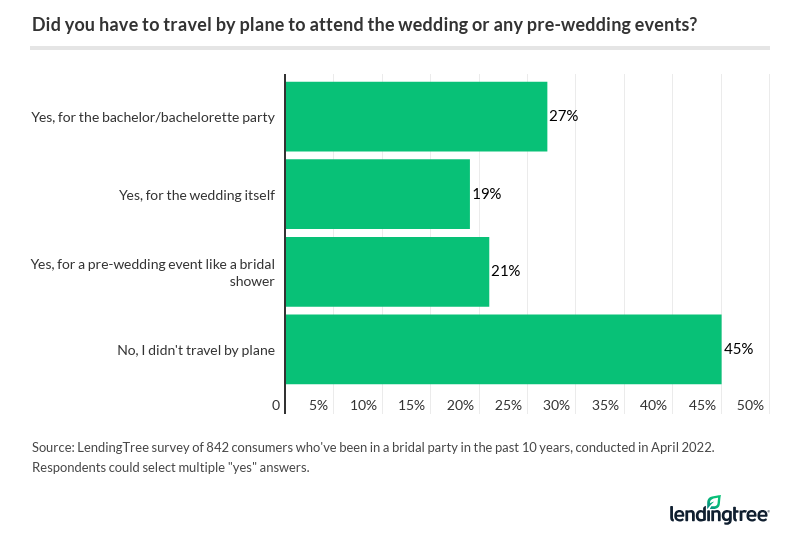 Getting dressed up for the big day is the biggest chunk of the bridal party budget, however. For reference, The Knot reports that bridesmaid dresses average $130 a person, while groomsmen attire averages $170 — and alterations can be just as much. Here’s what bridal party members say cost them the most:

Men differ from the overall trend, with 35% citing the bachelor party as the most expensive, ahead of attire (32%).

Can you turn down an invitation to be in a bridal party?

Overall, 62% of respondents think wedding costs for bridal party members are getting out of hand — and inflation is only going to make things worse, Schulz says. As such, some folks may decide it’s best to politely decline being a bridesmaid or usher rather than get in over their heads, as 19% of respondents did.

“[High costs] lead to hurt feelings, ruined friendships, and a ton of stress and drama that could probably be avoided if those involved simply communicated better and showed a little more understanding of each other’s individual circumstances,” Schulz says.

On a positive note, among those who declined an invite to be a bridal party member, more than two-thirds say the bride or groom understood and it didn’t impact their relationship. 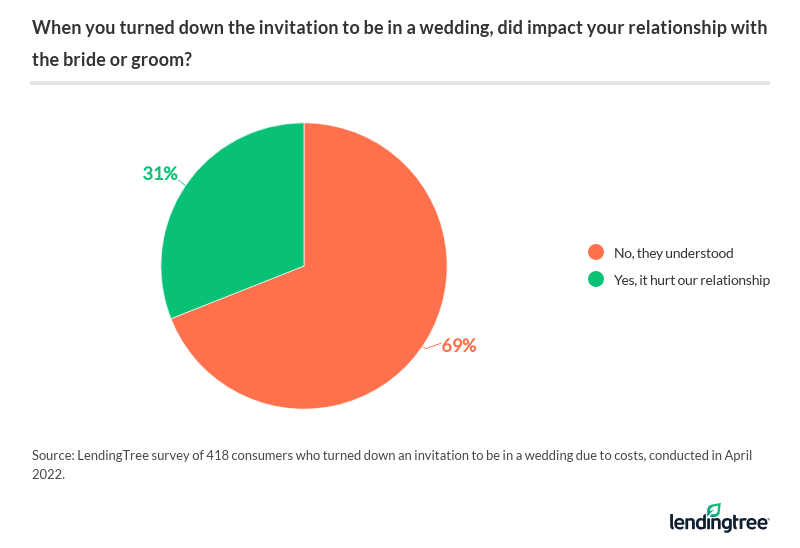 If you decide to stick it out, however, there are ways to make the costs more manageable.

LendingTree commissioned Qualtrics to conduct an online survey of 2,168 U.S. consumers, including 842 respondents who’ve been bridal party members in the past 10 years. The survey was administered April 4-8, 2022, using a non-probability-based sample, and quotas were used to ensure the sample base represented the overall population. All responses were reviewed by researchers for quality control.

More than half who’ve participated in a bridal party say they’ve felt pressure to spend above what they could afford, according to a LendingTree.