Credit card debt is not something that anyone would aspire to, but it can be a far more complicated story than simple overspending. As Matt Schulz, LendingTree chief credit analyst, put it, “There are almost as many causes of credit card debt as people who have it.”

According to a 2019 LendingTree survey, one in three cardholders are in credit card debt due to medical bills. And of those who paid a medical bill with their credit card, almost 10% owe at least $10,000.

And with average credit card APRs for current card accounts hovering around the 15% mark (and far higher for new card offers at more than 20%), those figures can spell serious financial trouble for those who find themselves struggling to pay off their revolving balance — or simply keeping up with the accrual of compounding interest.

In early October, LendingTree conducted an opt-in online survey of 764 credit cardholders, with the sample base proportioned to be representative of the general population. Here are some of the most compelling findings: 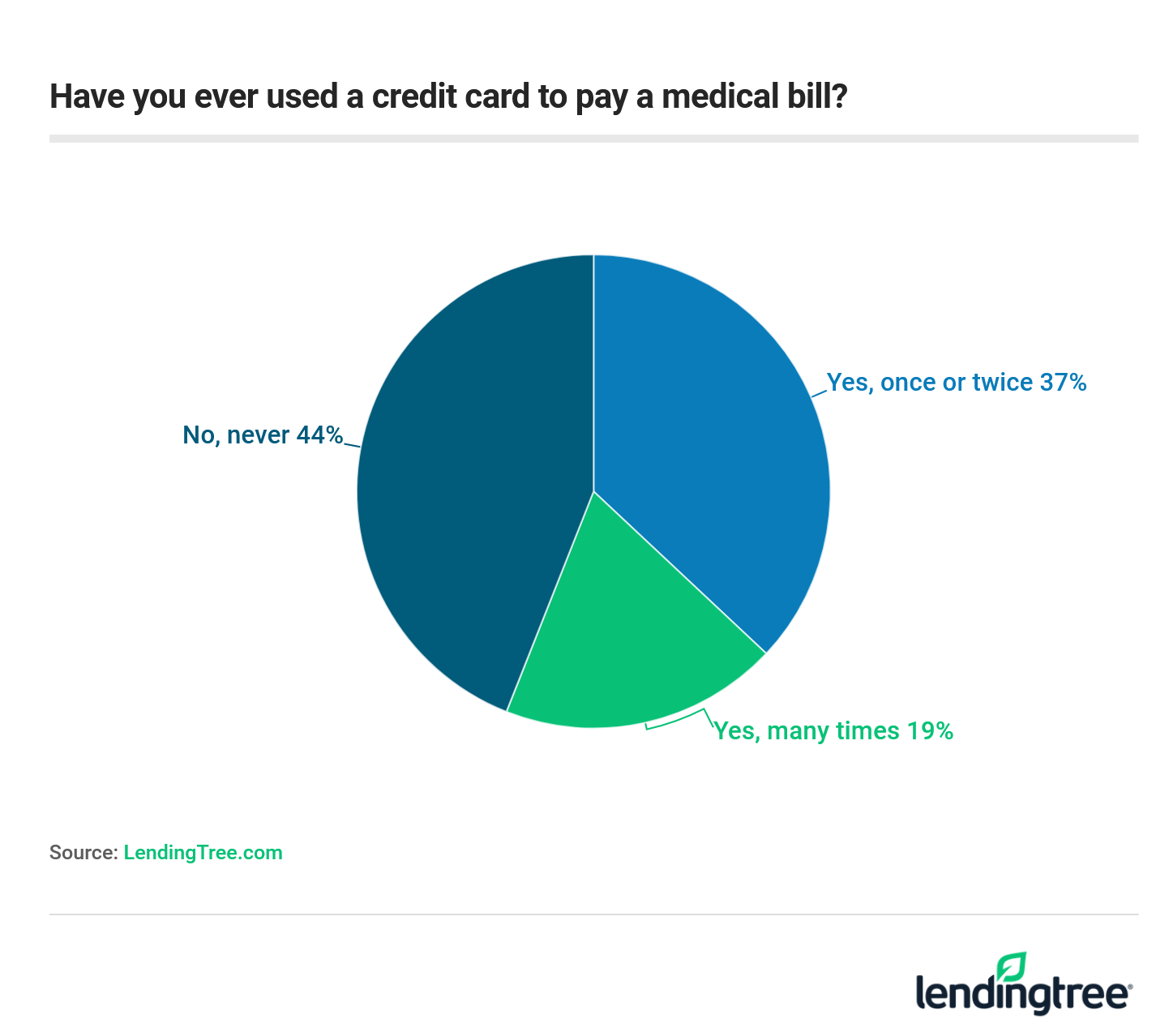 Given the high cost of medical care in America and the unpredictable nature of medical emergencies, it’s perhaps unsurprising that so many of the survey respondents said they’d paid a medical bill with a credit card at some point during their lives. But more troubling, a majority of those cardholders say they’re still feeling the repercussions of this choice — which many of them felt was not a choice at all.

Of the 56% of surveyed cardholders who had put a medical bill on plastic, more than half are still in debt because of that decision. What’s more, about a third of respondents admitted they regretted paying their medical bills with a credit card.

So why did they swipe in the first place? For most, it seemed their only recourse. 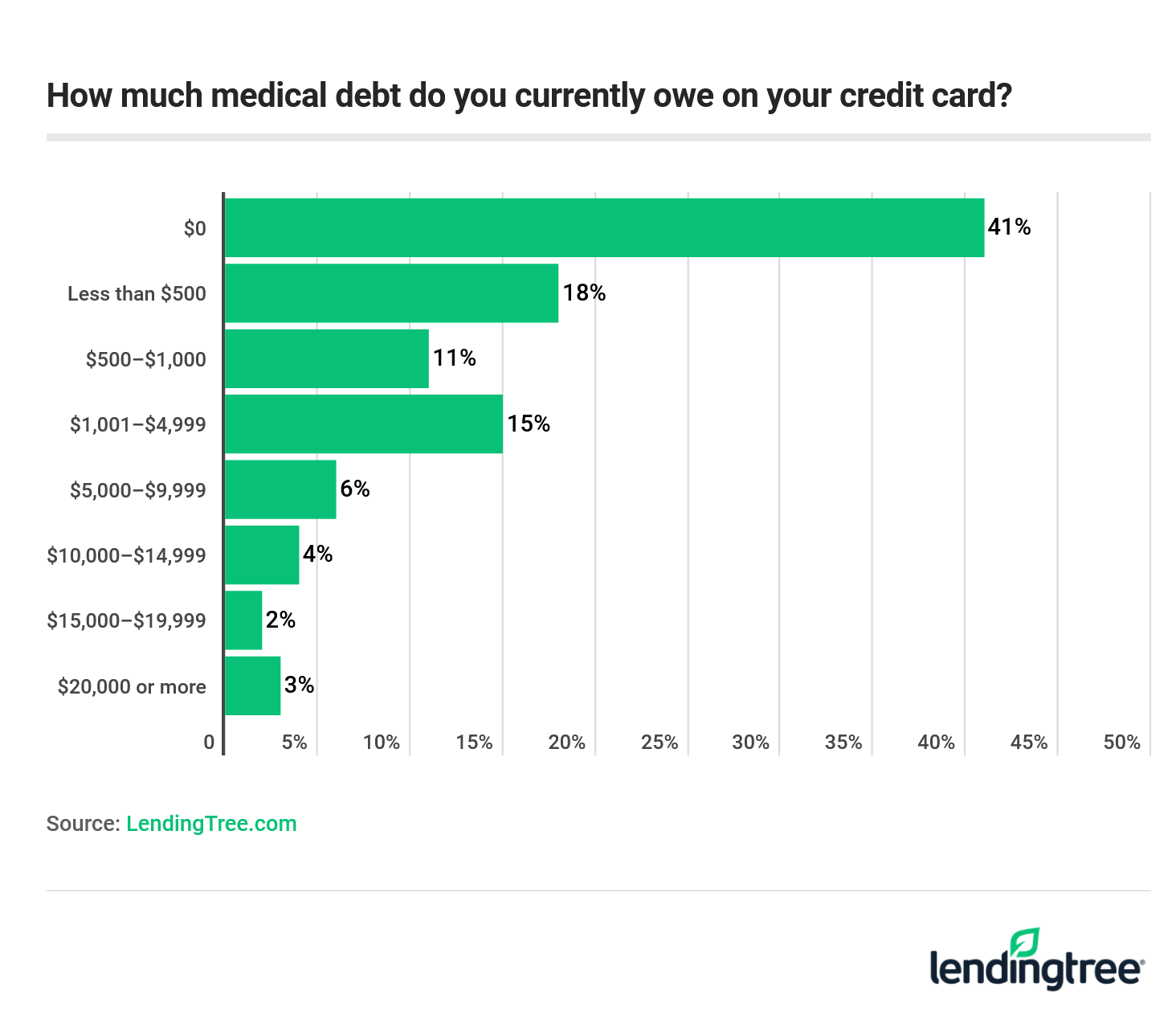 Nearly 6 in 10 thought they had no other option

Almost 60% of the surveyed respondents felt they wouldn’t have been able to afford their medical expenses without turning to credit cards. This was especially true for lower-income respondents, as well as millennials, of whom 76% said they had no other way to foot the bill.

In a world where diagnosis and treatment of a relatively minor injury, like a broken arm, can quickly add up to more than $2,000 (without insurance), it’s not hard to sympathize with this view.

But recipients of medical care may have more options than they think — and given how costly those bills can be over time, especially when accruing interest, it’s worth taking a moment to consider other payment options. For example, some providers may offer payment plans where funds are remitted to their organization directly, and may not even charge you interest for this courtesy.

There are also specialized medical loans, like Parasail’s ProPatient payment plan, that may be able to help you pay your bill over time without accruing interest, so long as your doctor or hospital agree to participate. 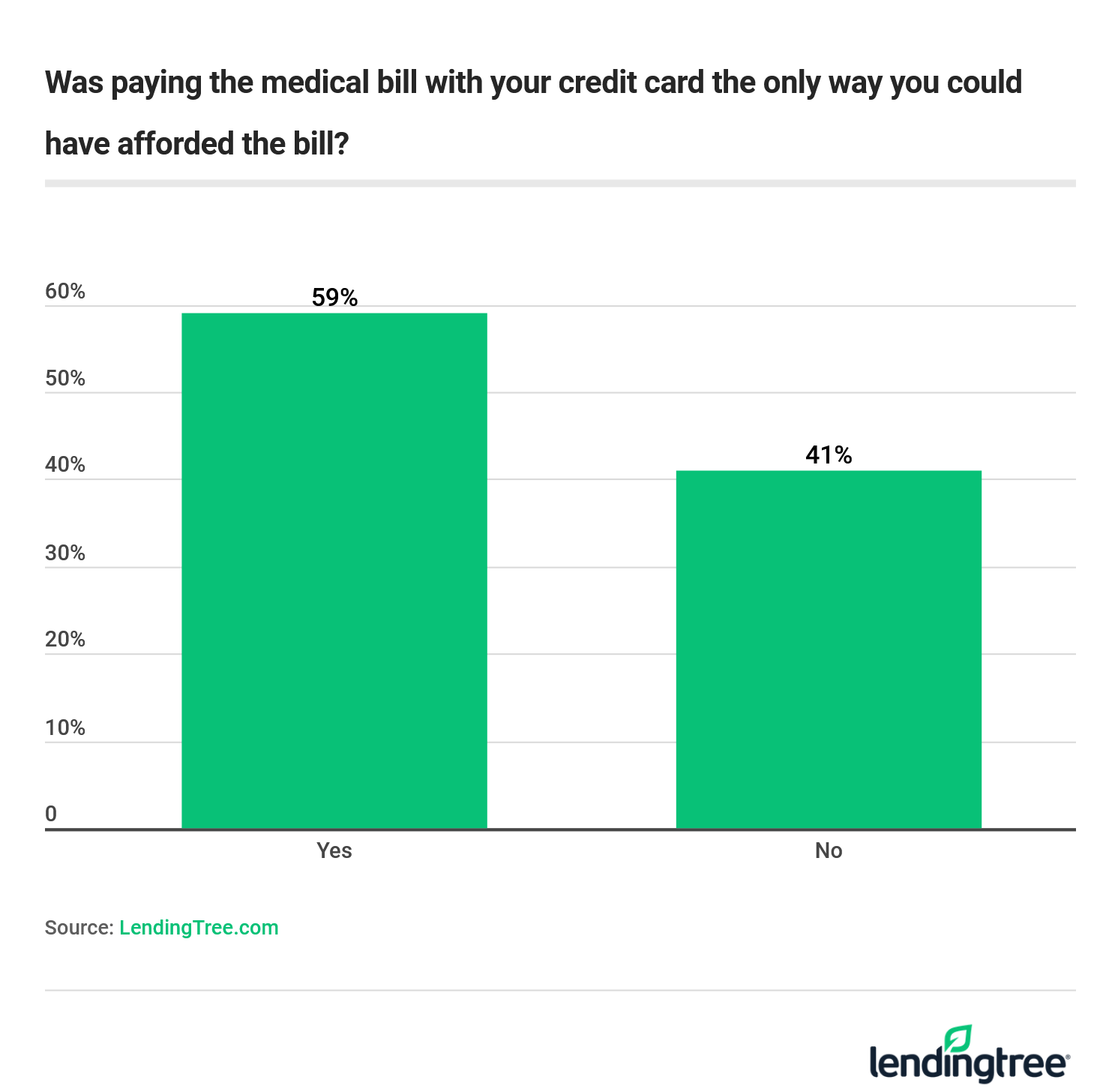 Should you pay a medical bill with a medical credit card?

Nearly 20% of surveyed cardholders said they had a medical credit card — and given how frequently these cards offer deferred interest or low promotional APRs, they’re an understandably attractive option.

But if you find yourself at the end of that interest-free or low-interest period without having paid off your balance in full, you may find yourself facing an unpleasant surprise.

In many cases, there’s a clause tucked away in the fine print stating you’ll be charged the full amount of interest you would have been accruing from the original date of purchase. And given that one of the best-known medical credit card products, , carries an APR of for new accounts, the interest alone could lead to a case of sticker shock that may land you right back in the hospital.

So is it ever a good idea to pay a medical bill with a credit card? What if you’re using your card to earn valuable cashback or travel rewards — as were approximately 60% of survey respondents?

That might be a viable tactic, but only if you’re sure you can pay off your card in full by the end of the month. Otherwise, the interest you’ll accrue will easily eclipse the value of whatever rewards you may have earned. So if you aren’t able to afford the bill in the short term, it’s worth looking into alternative options.

How to avoid taking on high-interest medical debt

For medical expenses you may face in the future:

For medical expenses you’ve already paid for with a credit card:

In any scenario, prioritizing debt repayment may mean adjusting your budget and funneling extra cash toward the project of paying off your medical bills.

That said, exercise caution: If you spend every penny paying off your credit cards at the expense of keeping anything in savings, warns Schulz, you may end up turning to plastic the next time you face an emergency, landing you right back where you started.

While the findings of this survey are grim, all hope is not lost for those facing expensive medical care. Balance transfers, personal loans and negotiation may all be valid options in the fight to lower the long-term cost of medical bills.

That said, medical debt is a serious issue in America, where more is spent on health care than in any other developed country. Although approximately 90% of Americans are insured today, there is still clearly a demand for a more affordable way to pay our medical expenses.

LendingTree commissioned Qualtrics to conduct an online survey of 764 credit cardholders, with the sample base proportioned to represent the general population. The survey was conducted Oct. 1-3, 2019.

According to a 2019 LendingTree survey, one in three cardholders are in credit card debt due to medical bills.