Study: More Than 1 in 3 Credit Cardholders Ending 2019 With More Card Debt Than They Started With

The end of every calendar year is a time for many to reflect on the highs and lows from the past 12 months. Unfortunately, some people might not have made as much financial progress as they likely would have liked in 2019.

Many cardholders are starting the new year with credit card debt 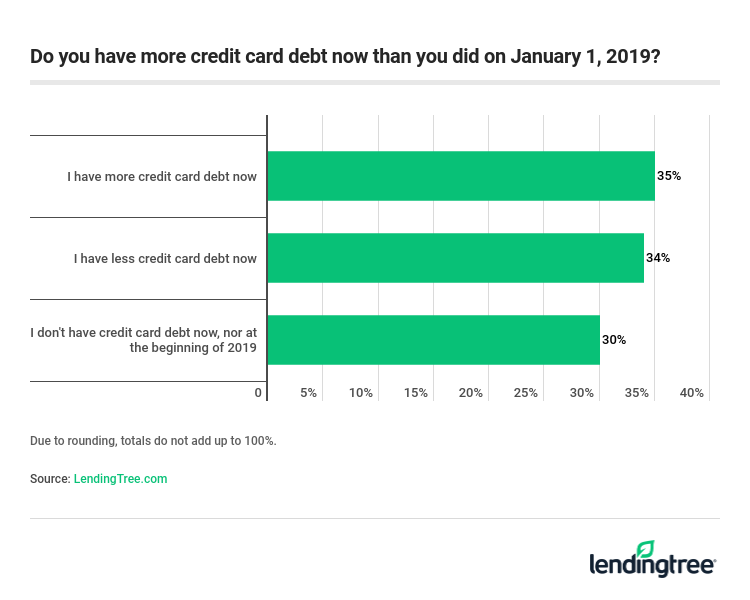 While a new year may feel like a fresh slate, your finances aren’t guaranteed to change for the better when the clock strikes midnight. While 35% of cardholders have more credit card debt now than on Jan. 1, 2019, compared to the other generations, millennials have it the worst – 40% had more debt at the end of 2019 than they had at the beginning of the year.

Credit card debt has been growing pretty steadily since we came out of the recession, said Matt Schulz, chief credit analyst at LendingTree.

“I’m not surprised that so many people have more card debt now than they did a year ago. We have an absolute mountain of credit card debt in this country, more than a trillion dollar’s worth, and we haven’t really seen anything to indicate that we should expect to see this number decrease,” he said. 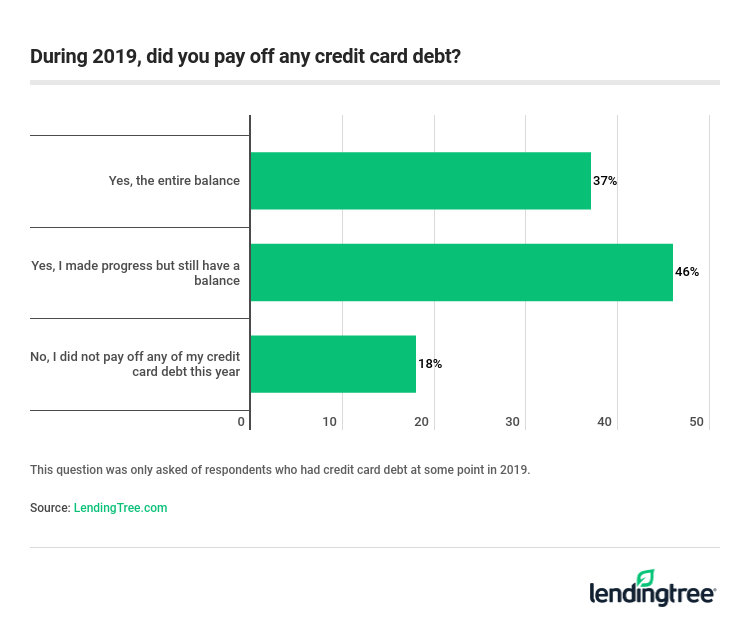 What is more problematic than the high rate of cardholders with credit card debt is that nearly 1 in 5 with credit card debt didn’t make any payoff progress this year. Not paying off your debt has some obvious financial repercussions, such as having to pay interest or risking falling into delinquency or collections. If and when another recession hits, it’s important to have your financial house in order.

“The truth is, both are probably true. But what we’re seeing now, I think, is more people really struggling with debt and needing that credit card to help them get by,” Schulz said.

While it’s easy to chalk up credit card debt as a result of overspending, Schulz doesn’t believe that is the sole reason why people are getting into debt or why they aren’t able to pay it off. He believes that many people are wrestling with student loan debt or personal loan debt and that it can be tough to make progress.

“It takes discipline and it takes action. And an awful lot of people who are in debt feel paralyzed by it and end up not really knowing what to do. And that can end up leaving people in a really tough situation that’s only going to get worse,” he warned. 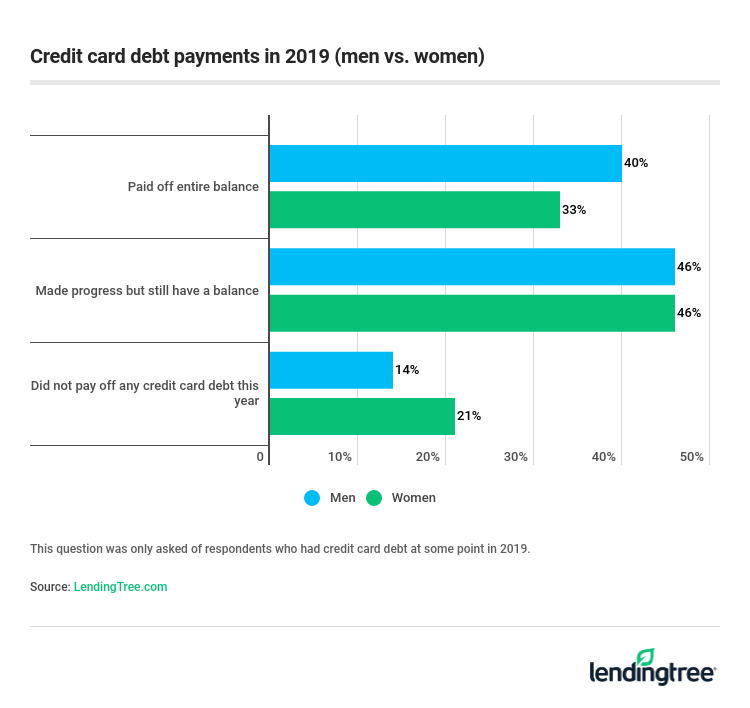 Men were found to be more likely than women to have paid off all of their credit card debt in 2019, while women were more likely to have not made any debt payoff progress. This disparity between those two genders matches up with what we’ve seen nearly every month of the LendingTree Confidence Index.

Why is it that women are struggling more with credit card debt than men? Perhaps because women face a lot more headwinds compared to men, said Schulz. They’re more likely to be affected by the wage gap or to be the head of single family households than men.

“There is just a lot stacked against women financially and that’s something that’s not going to change anytime soon, unfortunately,” Schulz said. He also feels there are stereotypes associated with how women spend that couldn’t be further from the truth.

“In most cases and all the data that we see, women are generally more cautious and more conservative when it comes to their finances and that is basically because they have to be in a lot of cases.”

How to prioritize paying off credit card debt in 2020

A mountain of credit card debt may feel impossible to conquer, especially in light of the survey’s findings, but Schulz believes facing your debt head-on is the best first step to take toward a debt-free life.

“The sad truth is that for some folks, credit card debt isn’t avoidable, whether it happens because of a medical emergency or job loss or other unexpected circumstances. The best way to avoid unnecessary credit card debt, however, is to be thoughtful with your spending and to utilize a budget to make sure that you stay on track.”

Consider these tips for paying off credit card debt in the upcoming year.

Open a balance transfer card. If used responsibly, you may be able to pay off your debt faster by transferring your existing credit card balance to a new credit card that offers an introductory 0% APR for a set amount of time. That way, 100% of your payments will go toward the principal rather than principal plus interest charges. You’ll need to do some math first to ensure you can pay off as much of your debt as possible before the introductory period ends and the interest rate kicks in on any remaining balance. You may not be able to transfer all of your debt, but cutting back on some interest payments can help.

Rework your budget. While you may already have a monthly budget in place that helps you live within your means, you should also be sure to add in debt payments. By setting aside money each month specifically for your debt, you’ll be less likely to spend it and more likely to work toward paying down your balance.

Start a side hustle. If you find you don’t have room in your budget for paying off credit card debt, consider increasing your income by taking on a side hustle. A few hours of working as an Uber driver, selling stuff online, doing freelance work or even dog walking can give you extra income you can apply toward credit card debt. Since you weren’t relying on this income to support you in the past, you should be able to set it aside for credit card payments.

At the end of the day, it’s important to prioritize repaying your credit card debt. Even if you can’t tackle it all in the next 12 months, a finish line can be in sight with proper planning. Chances are life will always throw a few financial curveballs your way. But with the proper strategies, healthy spending habits and a game plan, you’ll be OK. Schulz doesn’t believe credit card debt is going anywhere, so we might as well face it. “Life is expensive in 2019. That’s not going to change in 2020. So it’s really important to make 2020 the year to focus on knocking down some of that credit card debt.”

LendingTree commissioned Qualtrics to conduct an online survey of 791 credit cardholders, with the sample base proportioned to represent the overall population. The survey was fielded November 1-4, 2019.