Card Skimming at the Gas Pump: How Americans Are Reacting

Credit and debit card skimming is a growing threat to consumers filling up at the gas station — so much so that it has made an impact on how Americans pay for gas, according to a recent survey by LendingTree.

Skimming is a type of fraud whereby criminals steal data through bogus card readers they attach to payment terminals at gas stations (the same technique that’s popular at ATMs), which take data off a credit or debit card’s magnetic stripe without the victim’s knowledge. Criminals then sell the stolen information or use it to make purchases online. The victim usually doesn’t find out about the information theft until the arrival of a credit card statement or an overdraft notice.

“One huge driver of this [phenomenon] is the fact that gas station pumps don’t need to be converted to accept EMV cards until October 2020,” said Matt Schulz, credit analyst for LendingTree. “That makes those pumps low-hanging fruit for fraudsters.”

Schulz said skimming is a big issue that’s not going away anytime soon. It certainly has Americans on guard. According to a survey commissioned by LendingTree of American consumers who had purchased gasoline in the last 30 days:

LendingTree found that the younger you are, the more likely you are to claim you’ve been a victim of card skimming at the pump, though not by much. 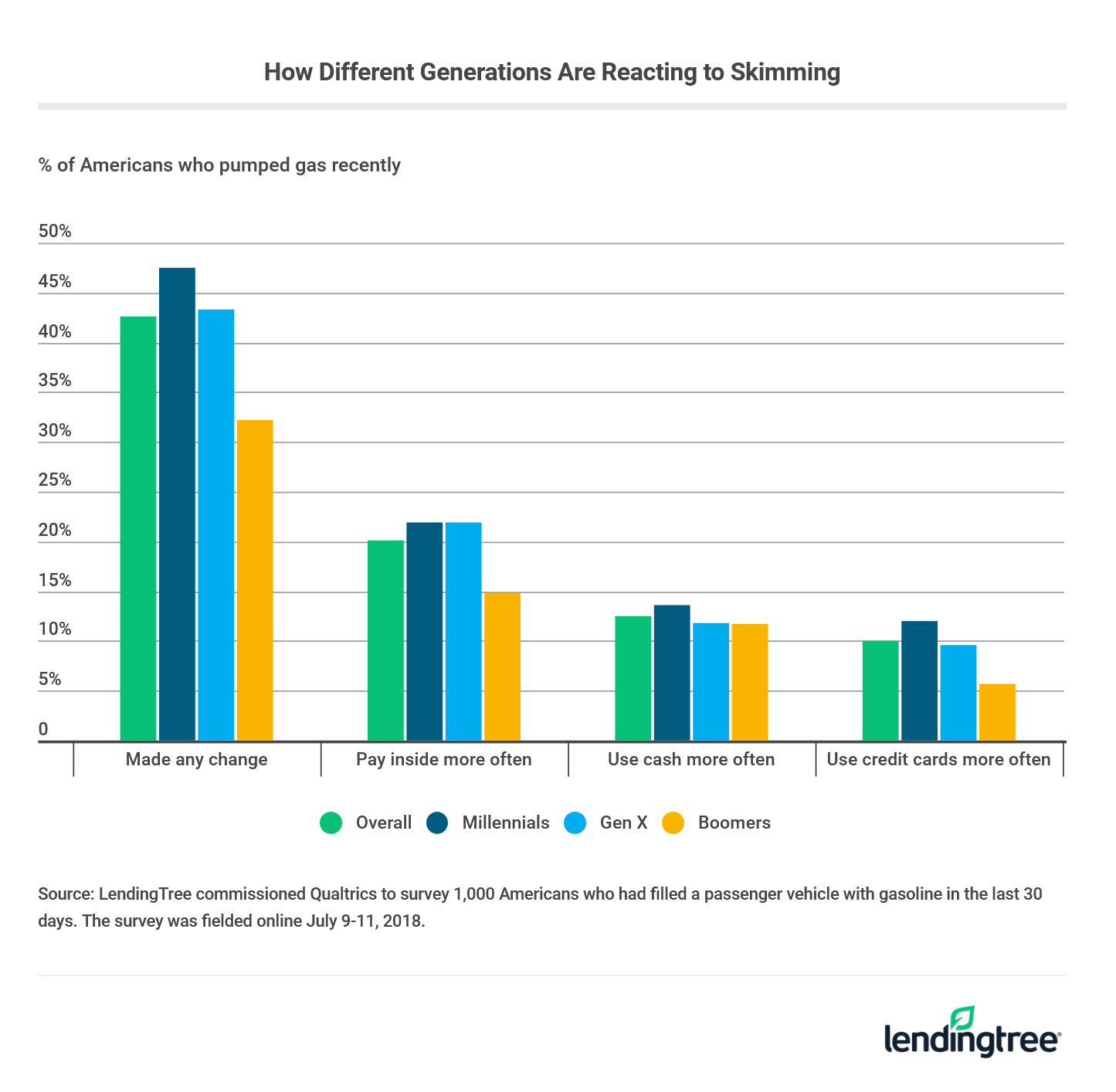 Millennials seem to be the top target of skimmers. Of the millennials surveyed, 21% said they’ve fallen victim to skimming at the pump, while 15% of Gen Xers and 8% of boomers said they’ve had their credit or debit card information stolen at gas stations.

There is no obvious difference between men and women. They have an equal chance of being a skimming victim. Men and women were equally likely to say they had been a victim of skimming.

More people opt to pay inside vs. at the pump

“I think that ordering is really interesting,” Schulz said. “[It] shows that the message that ‘credit cards are safer’ is getting across. It also shows that people are taking this seriously and making changes when necessary.”

Those who have not yet experienced skimming are, understandably, less likely to switch payment methods.

Combined, 38% of non-victims of skimming who are concerned about the risks said they have changed how they pay for gas. Schulz said that’s a really high number.

“It’s not easy to get Americans to change their habits,” he said. 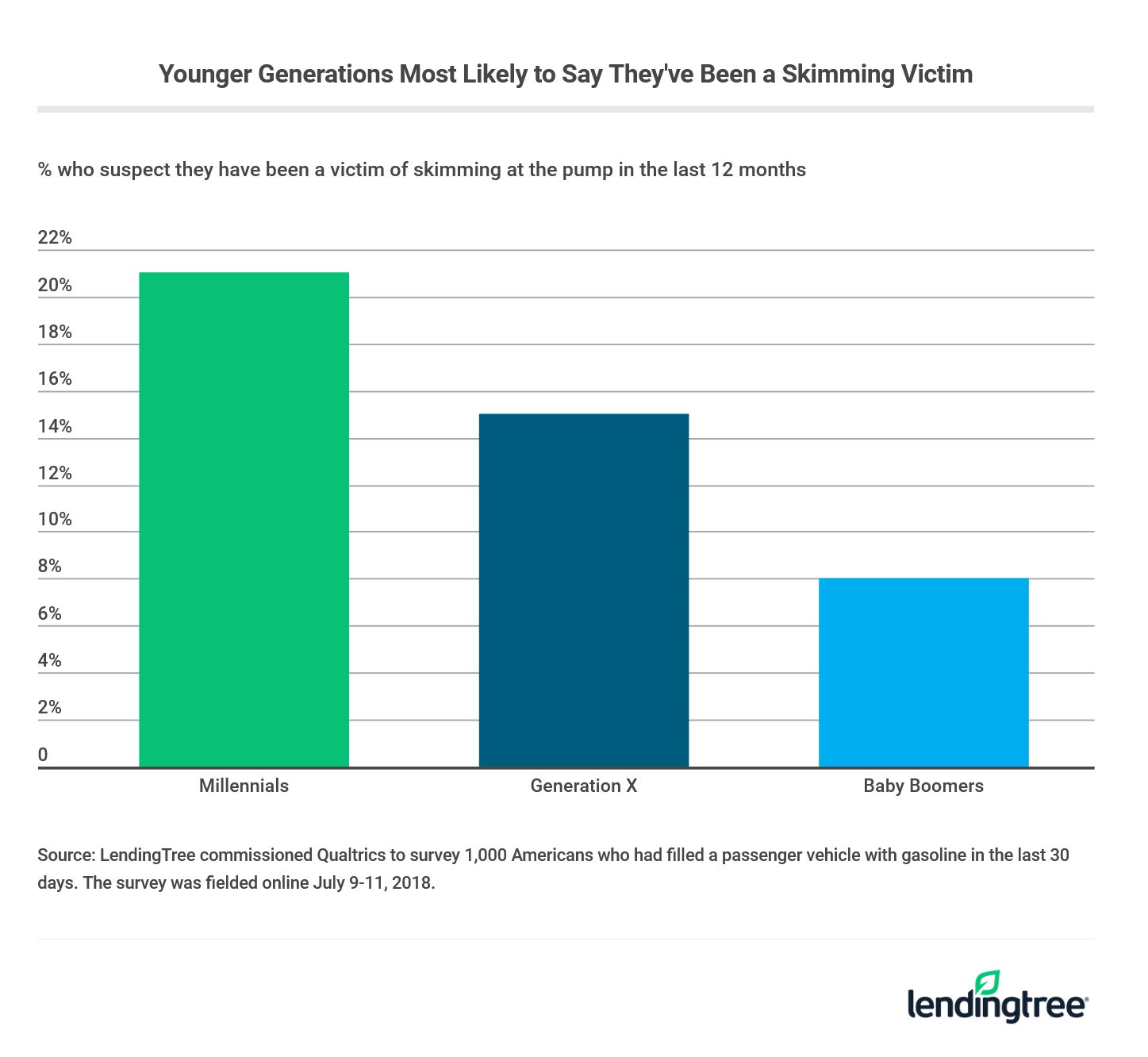 While many non-victims did make changes, those changes weren’t necessarily the same as the ones skimming victims made. Of non-victims who changed the way they pay:Here is a breakdown of the different payment methods those non-victims of skimming have switched to:

Tips on how to protect yourself at the pump

LendingTree commissioned Qualtrics to survey 1,000 Americans who had filled a passenger vehicle with gasoline in the last 30 days. The survey was fielded online July 9-11, 2018.

Card Skimming at the Gas Pump: How Americans Are Reacting

Credit and debit card skimming is seen as such a threat that it has made an impact on how Americans pay for gas.