For the second year in a row, the percentage of American drivers who say they’ve been a victim of card skimming at the gas pump in the past year has grown significantly, according to a new report from LendingTree.

Nearly a third of those who purchased gas in the last 30 days believe they’ve been a victim of either credit card or debit card skimming at the pump. That’s up from 23% in 2019 and just 15% in 2018.

Skimming happens when fraudsters steal a card’s magnetic stripe data by attaching tiny, difficult-to-detect devices to payment terminals. This type of fraud is most associated with gas station pumps and ATMs, as most other retailers have long since switched their point-of-sale terminals to accept smart chip (or EMV) credit cards, which are much less vulnerable to skimming because of the technology in the chip.

Many gas stations have not yet upgraded their payment terminals to accept smart chip cards.

The major credit card networks — Visa, MasterCard, American Express and Discover — required retailers to upgrade their terminals by October 2015. Under the credit card companies’ rules, businesses that didn’t comply would be liable for costs associated with card-related fraud that happened because of their failure to do the upgrade.

Gas stations were exempted from that deadline, however, because upgrading gas station payment terminals often means replacing gas pumps altogether, making the upgrade process far more disruptive, time-consuming and costly than for most other retailers.

The original deadline for gas stations to make these improvements was October 2017, before getting pushed back to October 2020. However, in the wake of the COVID-19 outbreak, it was pushed back again earlier this year and is now April 2021. It’s possible that the deadline could move again depending on the state of the pandemic next spring.

The absence of upgraded terminals has made gas station pumps low-hanging fruit for fraudsters — and as our survey data shows, they seem to be making the most out of the opportunity.

More drivers claim to be victims 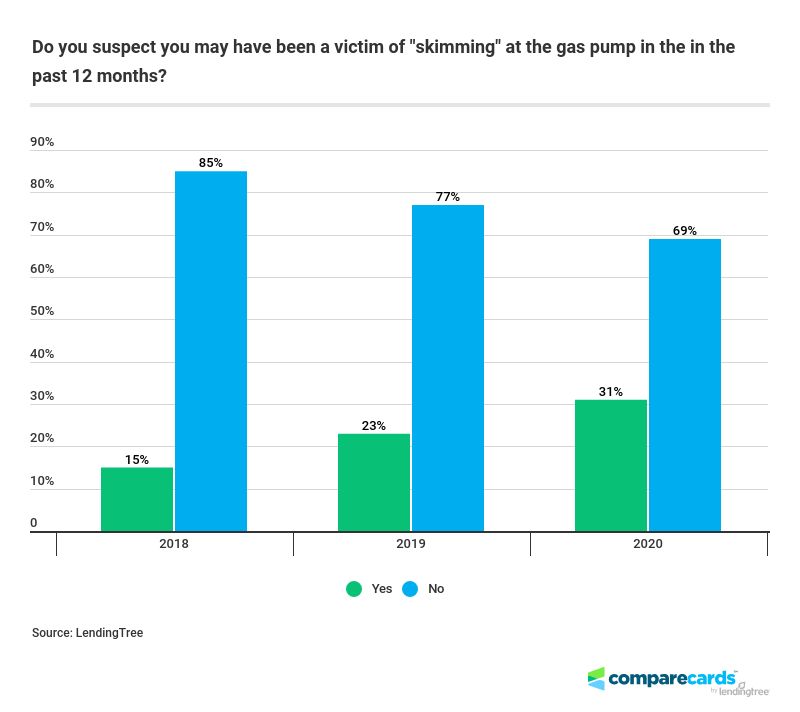 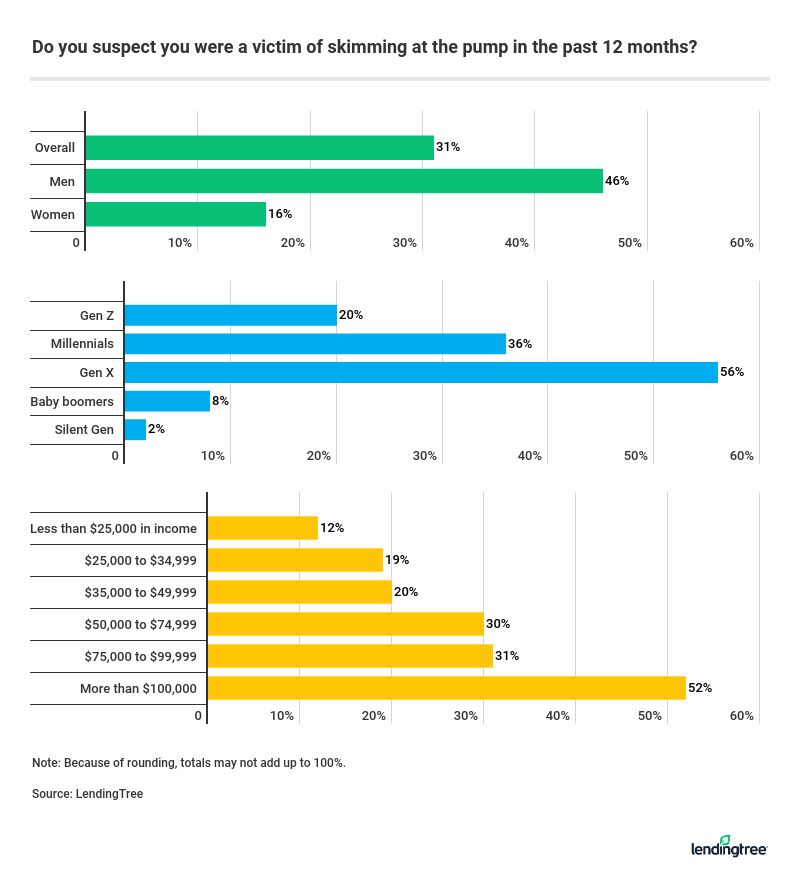 Twice as many drivers said they suspected they were a victim of skimming this year than just two years ago (31% in 2020 vs. 15% in 2018). Some age groups, income brackets and genders were hit far harder than others.

Drivers aren’t just seeing themselves victimized. About one-third of respondents (31%) said someone they knew had been a victim of skimming. That number is down slightly from 33% in 2019, the first year we asked that question, but it is still significant.

Drivers nervous about skimming, but are making changes 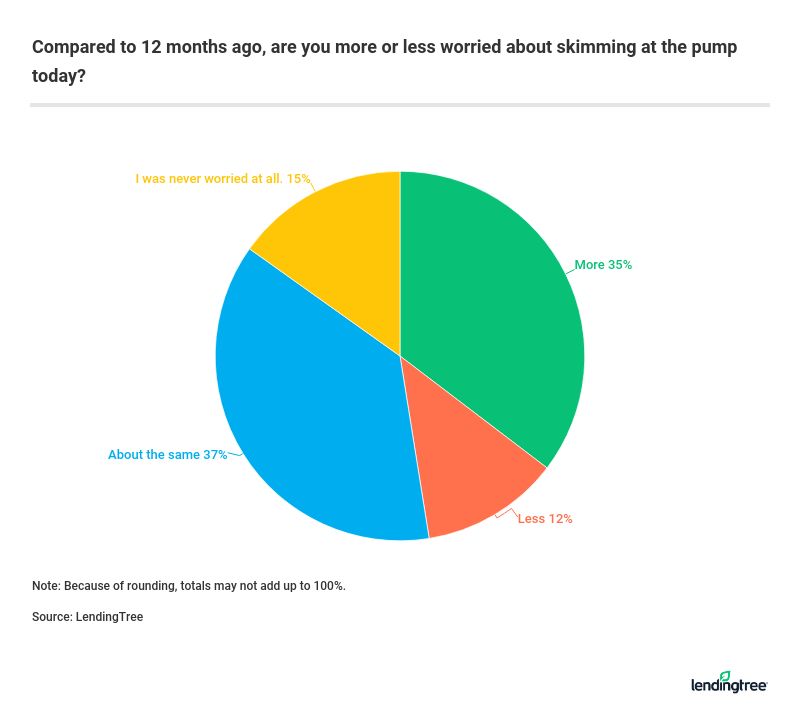 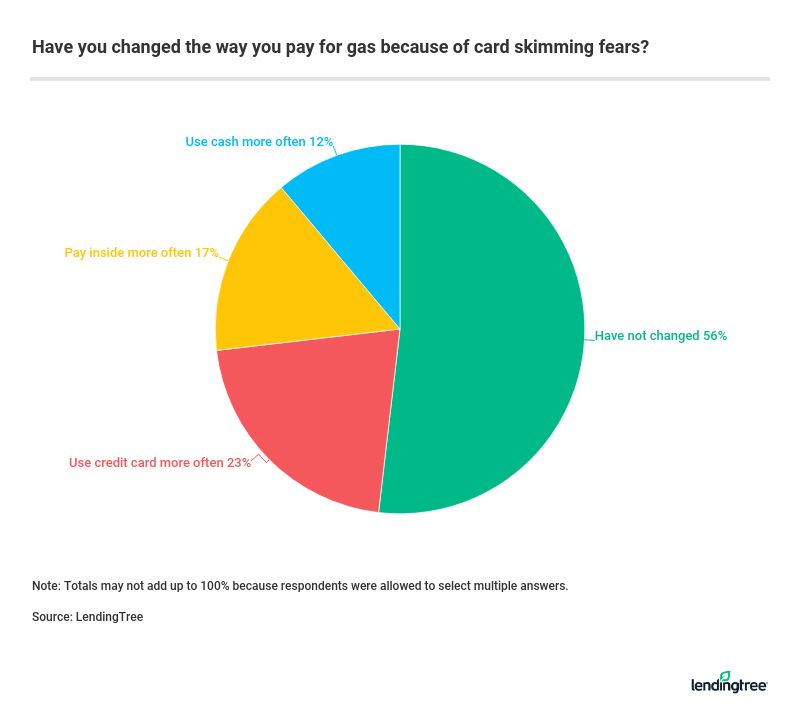 Skimming incidents have made headlines in virtually every town of any size in the United States at some point in the past five years. Those headlines, combined with people’s own personal experiences with skimming, have raised awareness of this type of fraud, and with that awareness has come some jitters.

More than a third of respondents (35%) said they are more worried about skimming today than they were 12 months ago. That’s down from last year, but just by 2 percentage points, showing that Americans’ concerns about skimming are still strong. (Just 12% said they were less worried.) Men, Gen Xers and high-income households were the most likely to say their worries had grown.

The good news is that nervousness is spurring change in many people’s habits.

More than 4 in 10 respondents (44%) said they have changed the way they pay for their gas because of their worries about skimming. That includes 23% who say they’ve begun using their credit card more often for the stronger fraud liability protections than debit cards. In keeping with much of the rest of the survey, Gen Xers, men and wealthier Americans were the most likely to say they had made a change.

Five years ago, when most retailers were converting their payment terminals and most Americans were just learning how to use a smart chip card, it seemed likely that card skimming fraud would be a thing of the past by 2020. That clearly did not happen.

Card skimming is likely to remain a thorn in drivers’ sides well into 2021 and perhaps beyond. Nothing will change until gas stations are able to convert their payment terminals to accept chip cards, and that isn’t likely to be a priority for those businesses until the COVID-19 outbreak is in the rearview mirror.

Here are some tips to help you avoid being a victim of skimming and to minimize the damage if it happens to you:

LendingTree commissioned Qualtrics to conduct an online survey of 1,050 Americans, including 883 who had filled their car up with gas in the last 30 days. The survey was fielded Aug. 14-18, 2020.

Nearly a third of those who purchased gas in the last 30 days believe they’ve been a victim of either credit card or debit card skimming at the pump.