More than a third of Americans say they plan to donate to a political campaign in 2020, according to a new report from LendingTree. And the younger you are, the more likely you are to say so.

The survey showed that about half of Generation Z (49%) adults and 41% of millennials said they plan to donate. That’s far higher than the 25% of baby boomers who said the same.

As the 2020 election cycle shifts into high gear and Americans begin to cast the first votes of the presidential primary season, LendingTree polled consumers about their campaign donation plans for the upcoming year. We asked, among other things, whether they planned to donate in 2020, whether they had ever donated in the past, whether they’d use a credit card to pay for it and what impact they thought their money would have.

What we found is that millions of Americans say they’re ready to give money to help political campaigns, even if they had never done so before.

The survey also revealed that for more than half of those who donated previously, social media was a major driver. 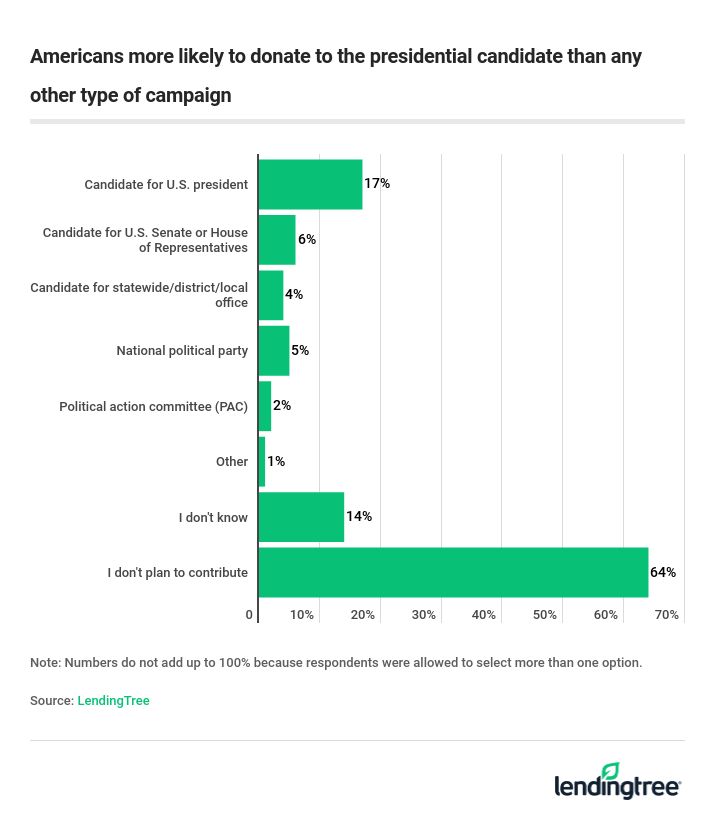 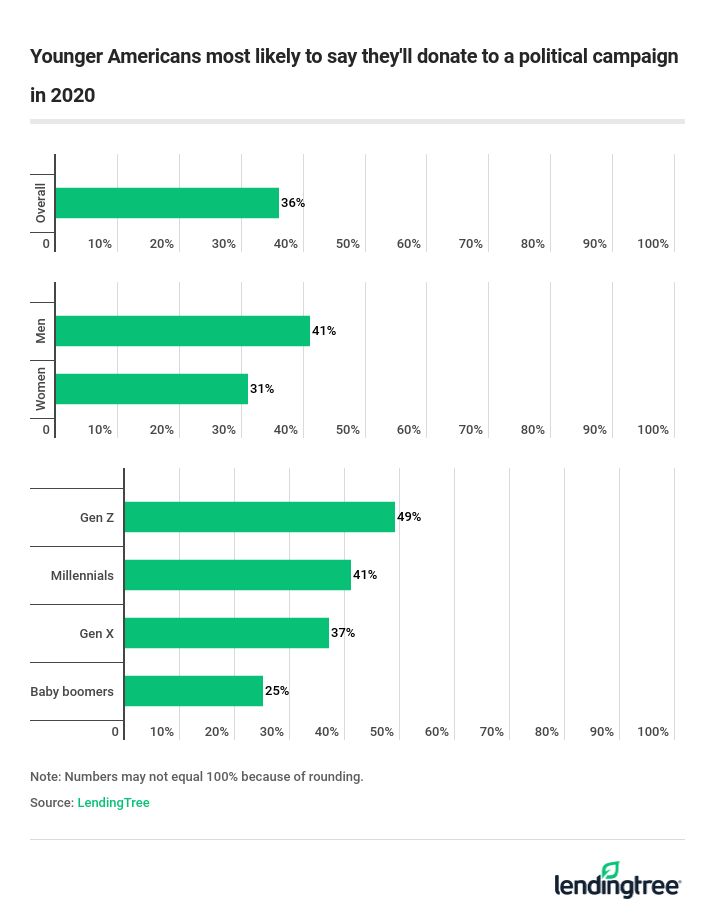 While a diverse mix of Americans say they plan to donate in 2020, some demographic groups were more likely to do so. As mentioned earlier, the younger you are, the more likely you are to say you will donate.

Of course, saying you intend to donate is hardly a guarantee that you actually will in the future.

For myriad reasons, the number of Americans who actually give is likely to be far smaller, and the number who give more than $200 will likely be even smaller still. (The Center for Responsive Politics estimates that just 0.5% of all Americans gave more than $200 to a political campaign in 2016, the most recent presidential election year.)

Why don’t people give? The most common answer (from 39% of those who don’t plan to contribute) is they simply can’t afford to, while another 20% said they’re not interested in politics and 17% don’t trust any of the candidates or parties. 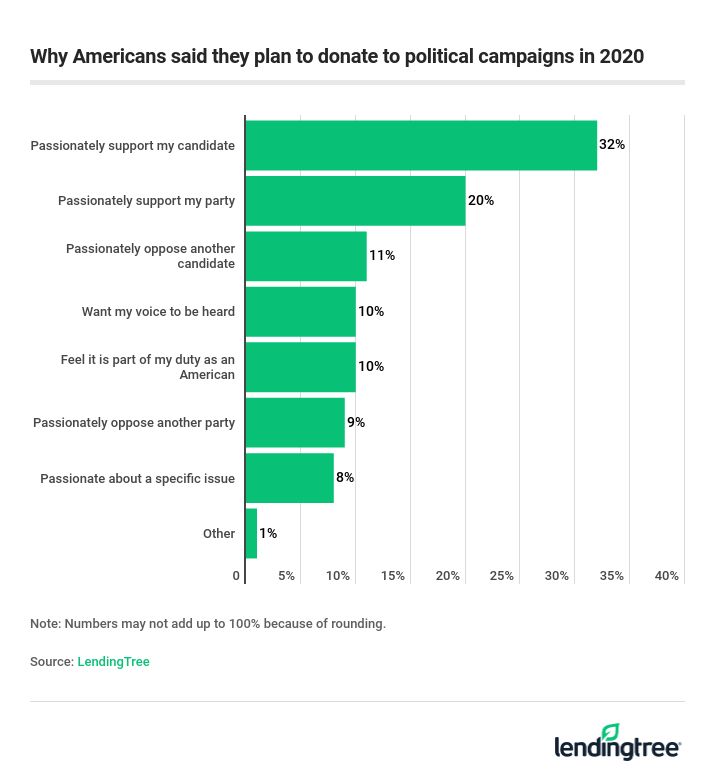 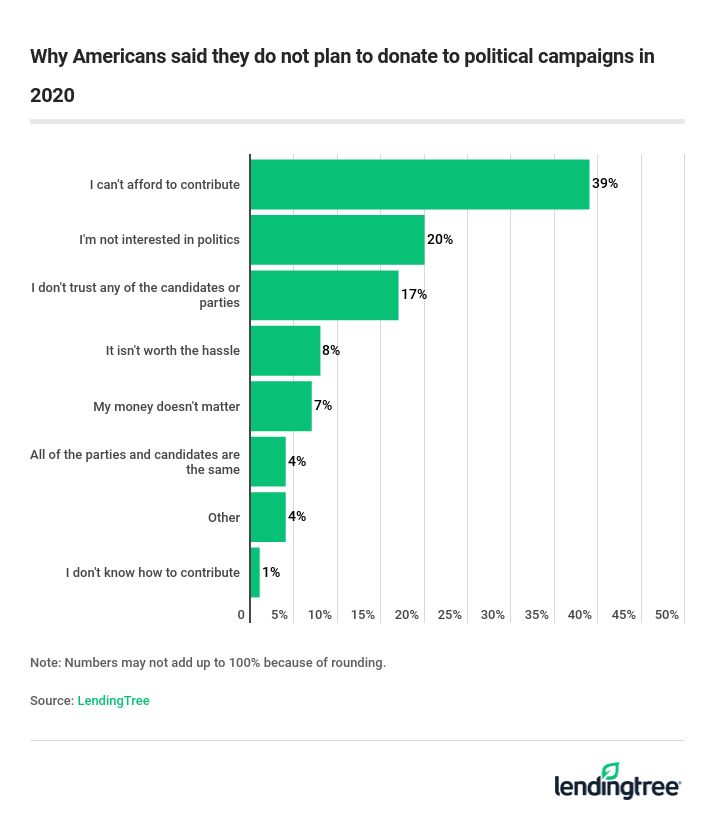 Unsurprisingly, credit cards are by far the most common way to donate to a political campaign, our survey found. Of those who had donated in the past, 43% had done so with a credit card, compared with 25% who did so with a debit card and about 15% who had used either a check or cash. 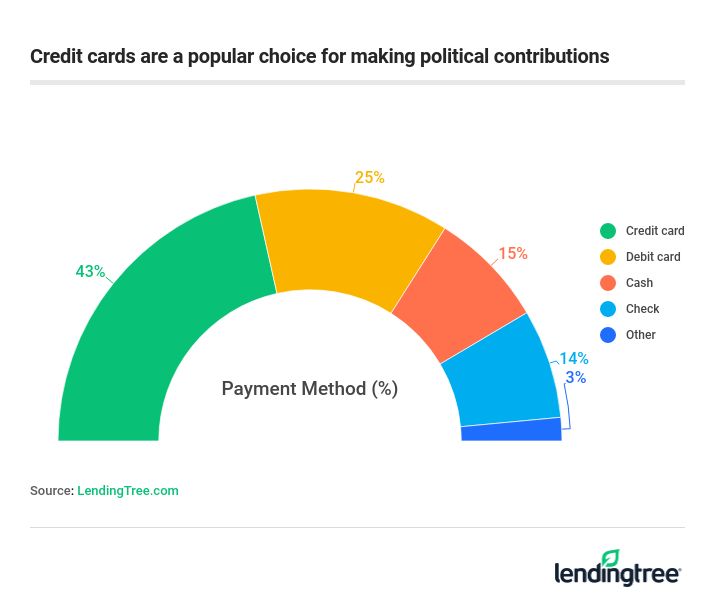 Today, you’d be hard-pressed to find a campaign website that doesn’t feature a prominent link to a donation button where you can contribute. Many campaigns even let you make recurring contributions, donating a set amount each month, up to relevant limits.

Our survey showed that 12% of Americans said they currently have a recurring contribution with a political campaign and another 6% said they have had one in the past.

While virtually all campaigns accept credit card donations because they want to make it as easy as possible to contribute, that ease comes with a cost. Just like any retailer, political parties and candidates pay fees to accept credit cards. Those processing fees are often taken out of the amount of the donation.

An analysis of Federal Election Commission data done by Newsy showed that federal political campaigns paid $51.5 million in credit card fees during the 2016 election cycle. The report also shows that costs will likely go higher in 2020. That’s a huge amount of money that won’t end up in a candidate’s war chest.

However, credit is still the safest choice because if a hacker or fraudster gets your credit card information and uses it, they won’t be spending your real money from a checking account unlike with a debit card.

Social media is enormously powerful, touching every aspect of life in 2020, and politics is no exception. Everyone from presidential candidates to those running for city council in a small town aim to leverage that power to rally supporters to vote and give money.

It appears to be working. Our report found that among those who had donated in previous elections, more than half (52%) said they had done so specifically after seeing a social media post from a campaign asking them to donate. Perhaps not surprisingly, the younger you are, the more likely you are to have said so.

Interestingly, among those who stated they would not donate in 2020, just 1% said they didn’t know how to donate. Though we don’t have any specific data saying so, it stands to reason that the proliferation of political ads via social media has helped drive that number so low.

The bottom line: Donate, but do it cautiously

As you might expect in today’s hyperpolarized America, there’s a thread of skepticism about the state of today’s politics running through our survey results. For example, 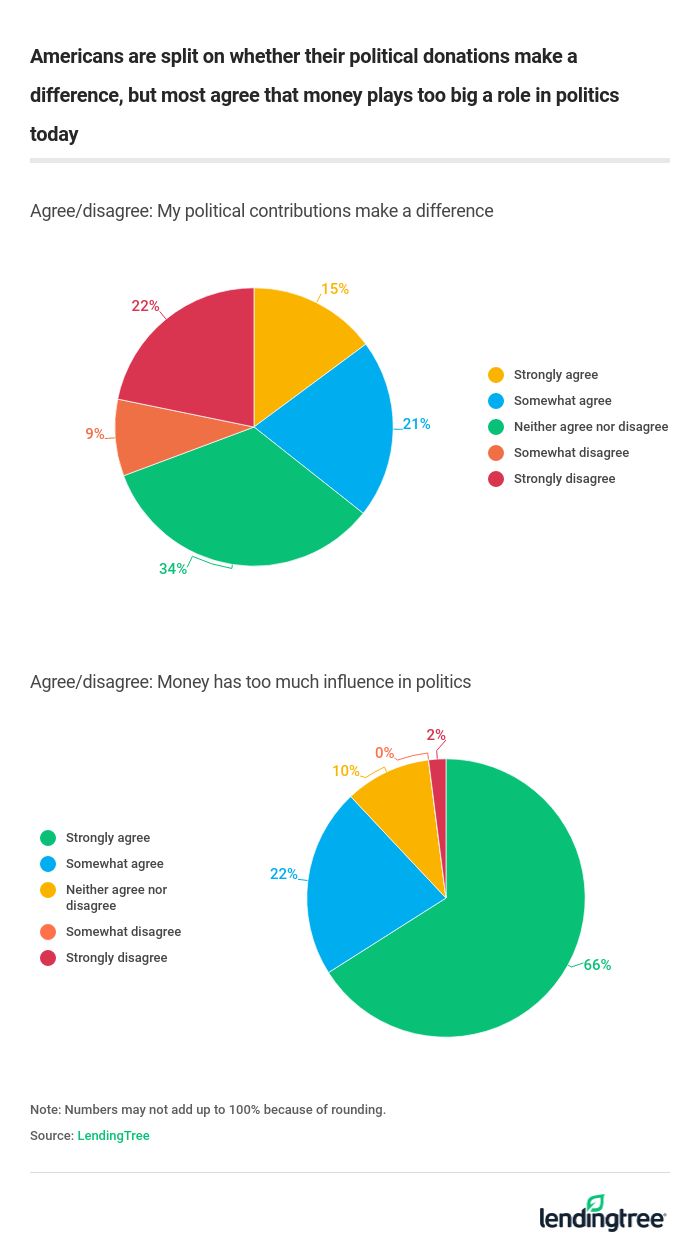 Still, despite those numbers, our survey also shows huge numbers of Americans want to be active in the process. They want to support their candidate, their party or their cause, and they’re willing to put up their hard-earned money to do so.

As with anything involving your money, however, it’s wise to be cautious. Here are a couple of tips you can take to make sure your donation goes as planned.

LendingTree commissioned Qualtrics to conduct an online survey of 1,001 Americans, with the sample base proportioned to represent the overall population. The survey was fielded Jan. 8-13, 2020.

Generations are defined as:

Millions of Americans say they’re ready to give money to help political campaigns, even if they had never done so before.