Parents of Young Kids Expect to Shell Out More Than $300, on Average, This Halloween as More Americans Plan To Spend on the Spooky Holiday

Americans are gearing up for Halloween as the spooky holiday season approaches. But the most unsettling aspect this year might not be the creepy costumes or haunted houses. For many, it’ll be the inflation-led price increases that are impacting their spending plans.

The latest LendingTree survey asks more than 1,600 U.S. consumers about their Halloween spending plans — and whether they’ll be going overboard this year. (Hint: You may want to find the houses of the 1 in 10 consumers who’ll splurge on full-size candy bars.) Here’s what else we learned.

This year, 87% of Americans plan to spend on Halloween. That’s a 16% jump from the percentage of Americans who planned to shell out for the holiday in 2021, according to last year’s Halloween spending survey.

“With the worst of the pandemic further in the rearview mirror, people are excited to get back to spending on the things they love most — particularly the things they maybe couldn’t fully enjoy over the last few years,” Schulz says. “Americans love Halloween, so I’m not at all surprised to see more of us spending money on it.”

In fact, every purchase category we tracked saw a jump this year compared to 2021. Costumes, in particular, jumped in popularity. While 19% planned to purchase a costume for themselves in 2021, that figure rose to 33% in 2022. Similarly, costumes for pets jumped from 9% to 16%. Costumes for kids also rose, from 20% to 25%.

Millennials and Gen Zers are doing it for the ’Gram

Not everyone preps for Halloween simply because they enjoy it, though. In fact, some “do it for the gram.” Overall, 22% have purchased (or plan to purchase) Halloween items specifically to post about them on social media. An additional 21% say they’ve done so for previous Halloweens.

This year, the youngest generations are particularly keen to spend some cash for a Halloween post. Millennials ages 26 to 41 are most enthusiastic at 35%. That’s followed by Gen Zers ages 18 to 25 at 33%. Meanwhile, men (29%) are nearly twice as likely to spend on a social media post than women (15%).

High earners and parents shelling out the most this Halloween

Americans may be excited for this year’s spooky holiday, but virtually everything is more expensive than a year ago. Halloween items are no exception: This year, Americans plan to spend an average of $169 on Halloween.

Some groups are more willing to shell out than others, though. In fact, six-figure earners plan to spend a whopping $340, on average — the most of any group. Parents with underage kids are the only other group willing to spend a similarly high amount, at an average of $309.

Schulz believes passion for the holiday plays a role in increased spending among both groups. But because high earners typically have more room in their budgets for the holidays, he says that enthusiasm is likely a much bigger factor for parents.

“Any parent with young kids can tell you what a big deal Halloween is,” Schulz says. “It’s a day when families can create memories that will last a lifetime. However, creating those memories can be really expensive. Parents and kids alike feel pressure to go bigger and better and more elaborate, and it can cost a whole lot of money to do so.”

Meanwhile, millennials plan to spend $255, on average — the most of any age group. Men also expect to shell out more than women, spending an average of $228 on the spooky holiday.

Consumers are increasingly spending more than they can afford

Despite those triple-digit spending plans, Americans are increasingly spending more than they can afford on Halloween. Overall, 36% of consumers admit to spending outside their means on Halloween — 33% higher than the percentage of adults who said the same last year. 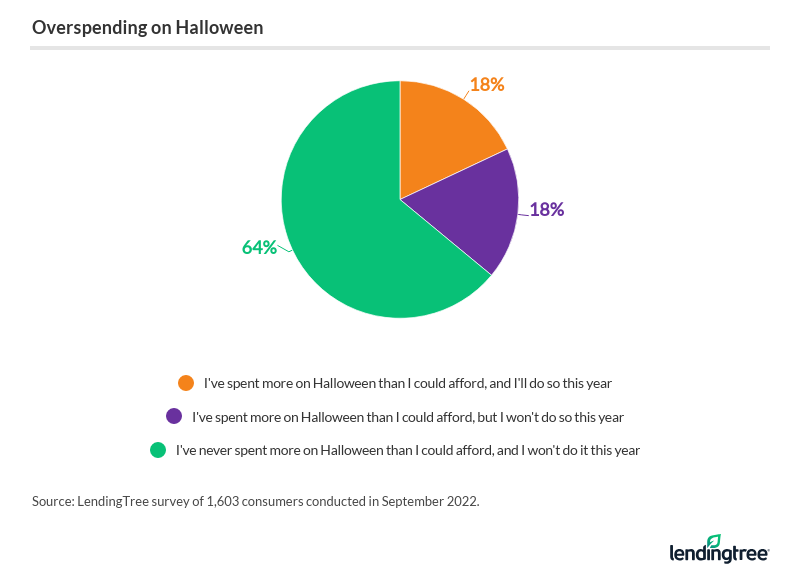 This year, Gen Zers and parents with kids younger than 18 are the most likely to admit to overspending, at 30% for both. Of those who overspent, 44% say they didn’t expect to spend so much, but it all added up — making it the most common reason for going over budget. Meanwhile, 34% say they did so to make their kids happy, which likely explains why parents with young kids ranked so high.

Here’s why other consumers overspent:

It’s not just ghouls and goblins frightening Americans. This year’s biggest jump scare is inflation — and for many, those rising costs mean less treats and more tricks.

Overall, 57% of Americans say inflation is impacting their Halloween spending. Of this group, 23% plan to buy less candy, while 20% have started budgeting now to spend more on Halloween. And 20% say they’re shopping around to compare prices. 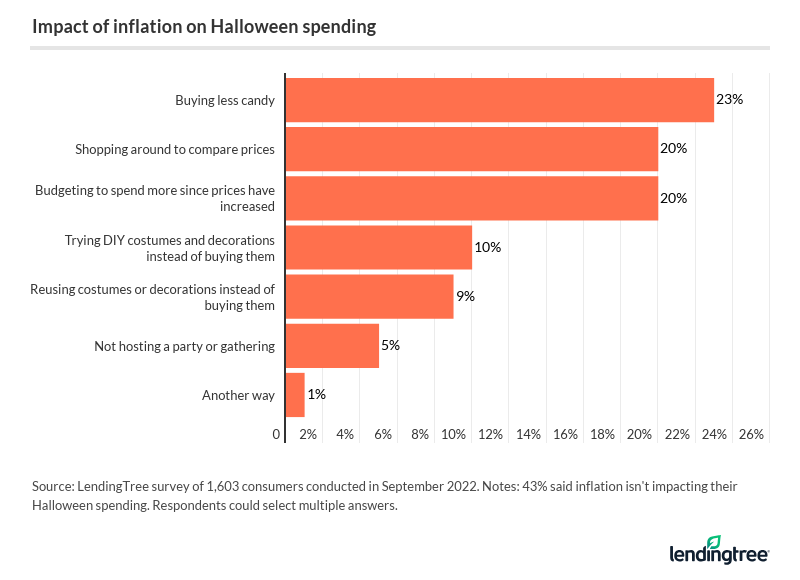 In light of this, Schulz predicts consumers will cut back on spending in some categories more than others.

“Everything is more expensive these days,” he says. “However, consumers may be more likely to skimp on the candy they offer, opting for smaller portions or less-known brands that might be a little easier on the budget.”

On the other hand, some consumers plan to shell out a little more this year. Just about 4 in 10 (39%) Americans say they’re splurging on Halloween, with Gen Zers (63%) and parents with young children (60%) the most likely to do so. Specifically, consumers are most likely to splurge on costumes (16%), decorations (14%) and Halloween-themed activities (11%). 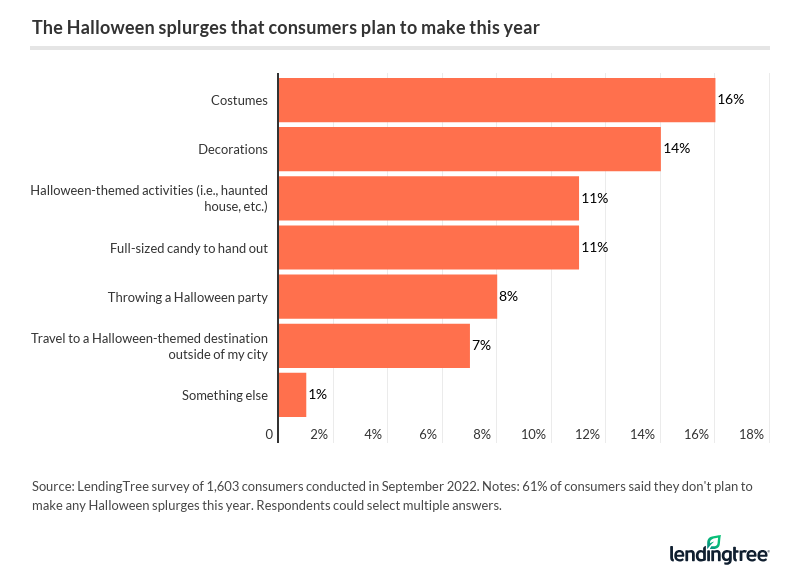 Trick or treat, or Netflix and screams? Americans’ Halloween plans

How are Americans celebrating the holiday? Grab some popcorn: 48% of Americans plan to watch a scary movie this year. But they’re not just watching on the big screens, either.

With the release of new horror content on popular streaming services, including big-budget productions like Hocus Pocus 2 on Disney+ and Halloween Ends (coming Oct. 14) on Peacock, many viewers may stay in this year. In fact, 51% have subscribed or are thinking about subscribing to a new streaming service solely to watch Halloween content. 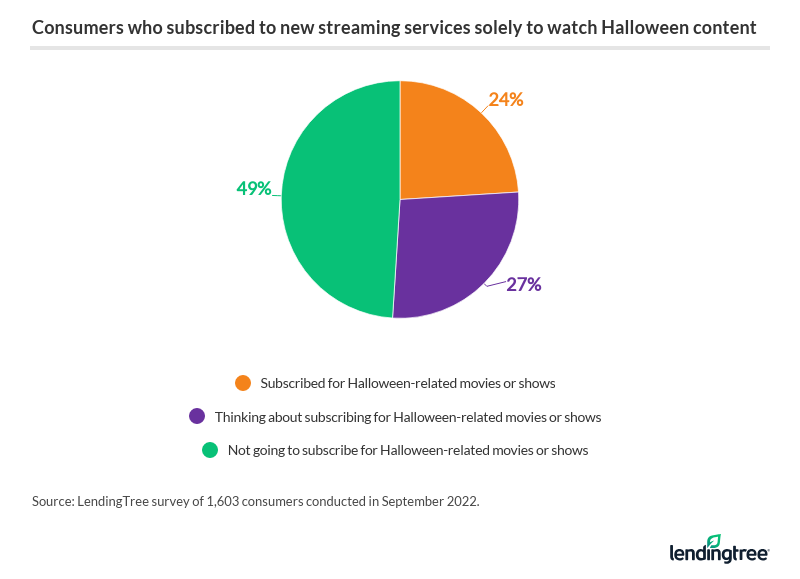 Schulz says consumers may find more value — monetary or otherwise — in turning to streaming services than hitting the theater. But he warns that those who plan to utilize a free trial to get their scary movie fix may forget about fees until it’s too late.

“People love scary movies and shows, and many streaming services offer great Halloween content to watch with friends and family,” Schulz says. “However, it’s very easy to forget to cancel a subscription. If you know that you only want to use a service for a short time, create a reminder in your online calendar or make a note on your old school wall calendar to cancel before the next fee is due.”

Beyond watching horror movies, 48% plan to celebrate by buying Halloween treats — tied as the most popular option — and 44% plan to decorate their homes. Additionally, more consumers plan to go out this Halloween: The percentage of Americans who plan to go trick-or-treating jumped from 19% last year to 32% in 2022.

Additionally, 48% of consumers don’t plan on incorporating any safety precautions into their Halloween plans. Of those who do:

How to splurge on the spooky season without overspending

After a cautious two years, you may be understandably eager to celebrate Halloween again. Though it may be difficult to keep your budget in check, Schulz says you shouldn’t let high inflation put a damper on your holidays. To keep costs down this Halloween without sacrificing enjoyment, Schulz says to:

LendingTree commissioned Qualtrics to conduct an online survey of 1,603 U.S. consumers ages 18 to 76 from Sept. 23 to 24, 2022. The survey was administered using a nonprobability-based sample, and quotas were used to ensure the sample base represented the overall population. All responses were reviewed by researchers for quality control.

75% of Americans will spend money on Halloween this year. The most common purchase is candy, with pumpkins and carving supplies next.

Can going overboard on Halloween make up for a less-than-spectacular year? Probably not, but according to a new LendingTree survey, most parents are going to…

When it comes to Halloween spending, about half of millennials say they’ve done it for the “gram” (Instagram) and other social media sites.