Even in the best of times, holidays can lead to overspending and getting into debt. With the ongoing pandemic, however, time-honored Halloween activities like trick-or-treating and going to public haunted houses may have lost some of their shine as people attempt to be safer — and more physically distant — in public. But does that mean people are saving their money and abstaining from the holiday this year? Or are they simply finding new ways to spend to get into the Halloween spirit?

Here’s what else we found.

75% of Americans spending money on Halloween

Most people said they were planning on dropping some cash on Halloween — and if the first thing that comes to mind when you think Halloween is candy, our survey found that over half of Americans plan on spending money on treats this year. Other common expenditures included pumpkins and/or carving supplies (24%), outdoor decorations (22%) and costumes for kids (20%). Interestingly, men (33%) were more likely to say they didn’t plan on spending money on Halloween than women (19%). 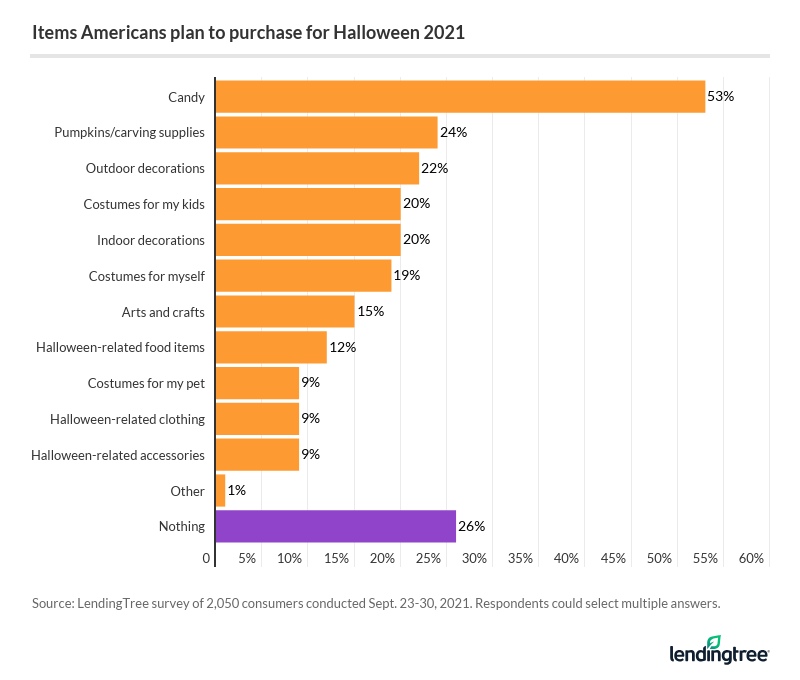 Noting the high number of those planning to spend money to partake in the holiday this year, LendingTree chief credit analyst Matt Schulz says he’s not surprised: “Americans love Halloween. Whether you’re 5 or 65, it’s a great excuse to get a little creative and maybe a little wild. And after what we’ve all been through for the past 18 months, millions of Americans are ready to do just that.”

Of course, it’s important to note that spending doesn’t necessarily translate to going into debt. And there are smart ways to spend. For example, using a cashback credit card can help spenders save on purchases they were already going to make, like planned Halloween-related costs.

We also asked how Americans will celebrate Halloween this year. The top responses were as follows:

Dressing up in costume was less common among older adults, with 40% of Gen Zers and 34% of millennials saying they’ll dress up but only 15% of Gen Xers and 3% of baby boomers saying the same.

Just 12% said they don’t plan to celebrate Halloween due to the pandemic, while about 21% said they wouldn’t celebrate this year for reasons other than COVID-19.

About 3 in 10 plan Halloween splurges, especially on costumes

Among those planning to go all out, costumes (9%) and themed activities like haunted houses (8%) are the top two items they plan to spend extra on. Another potential expense for this time of year is a new subscription to a streaming service to access holiday-related movies and TV shows, as 15% of consumers say they’ll subscribe to a new streaming service in order to watch Halloween content. This trend is most common among Gen Zers and millennials (both 24%), as well as parents with young kids (27%).

Finally, we asked whether respondents had ever spent more than they could afford on Halloween-related items. While most (73%) said no, 13% said they will overspend this year.

“Throughout the pandemic, we’ve heard of people going above and beyond when it comes to holidays and other events to make up for how crummy the last couple of years have been,” says Schulz. “Don’t let your big Halloween blowout turn into debt, though. One evening of fun isn’t worth it if it is followed by months of debt.”

Both parents with kids under 18 and Gen Zers are going all out for Halloween this year — but their motivations differ.

For example, about a quarter of parents with young children say they plan on overspending this year. Meanwhile, 47% of parents say their reason for overspending is to make their kids happy — that’s up from about a third of these parents who said the same in last year’s survey. But it’s important to note that parents could also be dealing with existing debt — from back-to-school spending, for example, as is the case for about a third of parents.

On the other hand, 23% of Gen Zers said they planned to overspend on Halloween this year, with the most commonly cited reason being unintentional spending that added up over time (30%). By contrast, all other generations were more likely to say that they overspent to keep their kids happy.

The other top motivator for Gen Zers’ overspending was to avoid missing out on what their friends were doing (29%). 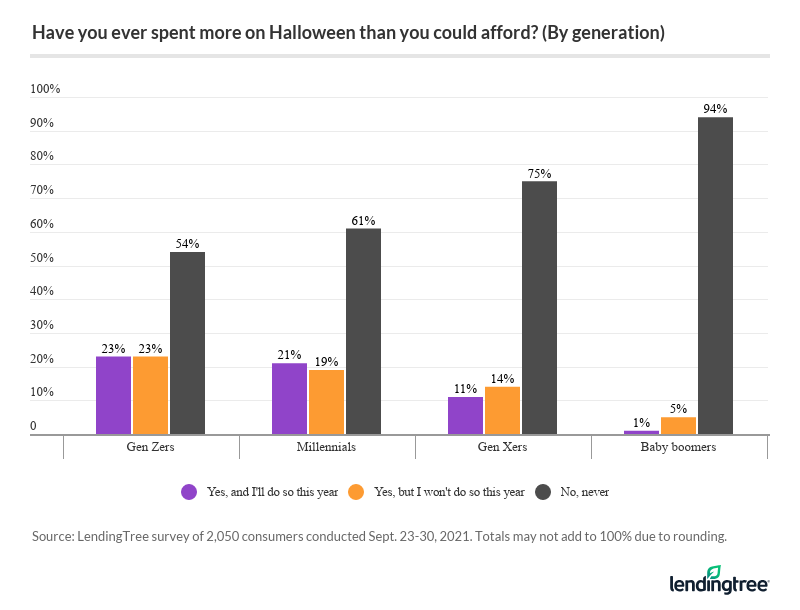 Social media content is also a reason why some people may overspend: About 16% of respondents said they purchased, or planned to purchase, Halloween-related items specifically for social media posts this year. And this is where Gen Zers and parents find common ground — 60% of Gen Zers, as well as 52% of parents with kids under 18, said they have purchased Halloween items for social media.

Holidays can be a tempting opportunity to overspend, but taking on debt can be dangerous. Here are five tips to help you save money this Halloween:

LendingTree commissioned Qualtrics to conduct an online survey of 2,050 U.S. consumers from Sept. 23 to Sept. 30, 2021. The survey was administered using a nonprobability-based sample, and quotas were used to ensure the sample base represented the overall population. All responses were reviewed by researchers for quality control.