About half of Americans with children under the age of 18 have let one of their kids borrow their credit or debit card to buy something online, according to a new report from LendingTree.

Unfortunately, however, if you have loaned your child one of your cards, there’s about a 50-50 chance that you’ve regretted doing so.

Those are some of the troubling findings from LendingTree’s latest report on kids and credit cards. We asked Americans about everything from what they consider to be the perfect age for getting your first card to whether their kids have ever used mom or dad’s cards to buy something without their knowledge.

What we found is that many Americans have been burned by the volatile mixture of kids and credit cards. And, while most Americans feel that you should wait until you’re in your 20s to get your first credit card, they also think that it’s OK to let your kid use your credit or debit card to make online purchases, even though it often doesn’t go well.

52% of Americans with kids under 18 have let their kids borrow their credit or debit card for online purchases.

It’s never been easier for kids to buy. As online retailers keep simplifying the buying process and innovations such as in-app purchases become more widespread, that trend is only going to continue, and it’s clear that millions of American parents have embraced it.

More than half of Americans have let their kids use their credit or debit card to make online purchases, and men are far more likely to have done so. Two-thirds of men (66%) say they’ve done so, compared with just 43% of women. 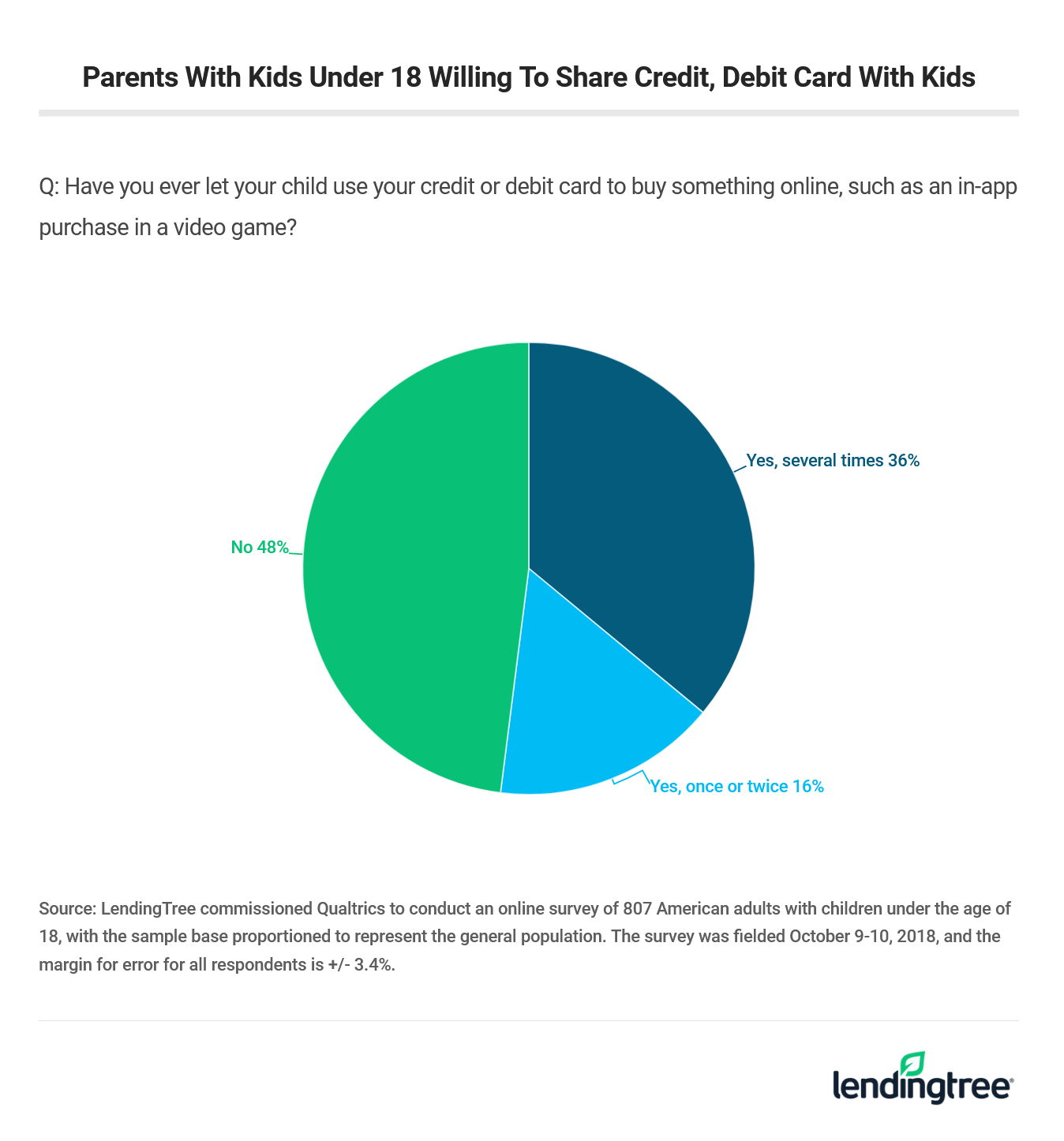 Wealthy Americans are by far the most likely to embrace lending their kids their credit cards. Americans with household incomes of $100,000 per year or more are nearly twice as likely as those with lower incomes to do so (80% to 43%).

Why are these groups more likely to risk lending their kid their card? They’ve got a bigger margin for error. Junior’s surprise credit card spending spree may only be a small bump in the road for an affluent family, but it could be devastating to a family on a tight budget.

48% of those parents have regretted loaning their card to their kid, and men are far more likely than women to say so.

Most parents surely have the best of intentions when they let their son or daughter borrow their credit card or debit card. Perhaps they’re granting their kid a bit of independence in letting them buy something themselves. Maybe they’re rewarding the child for doing extra chores around the house, scoring the big goal during the soccer game or acing that big math test. The sad truth, however, is that when you lend your kids your card, things often don’t go as planned.

Men are nearly three times more likely than women to have regretted lending their credit card. More than 4 out of 10 men (44%) said they’ve done so; meanwhile, just 15% of women said the same. 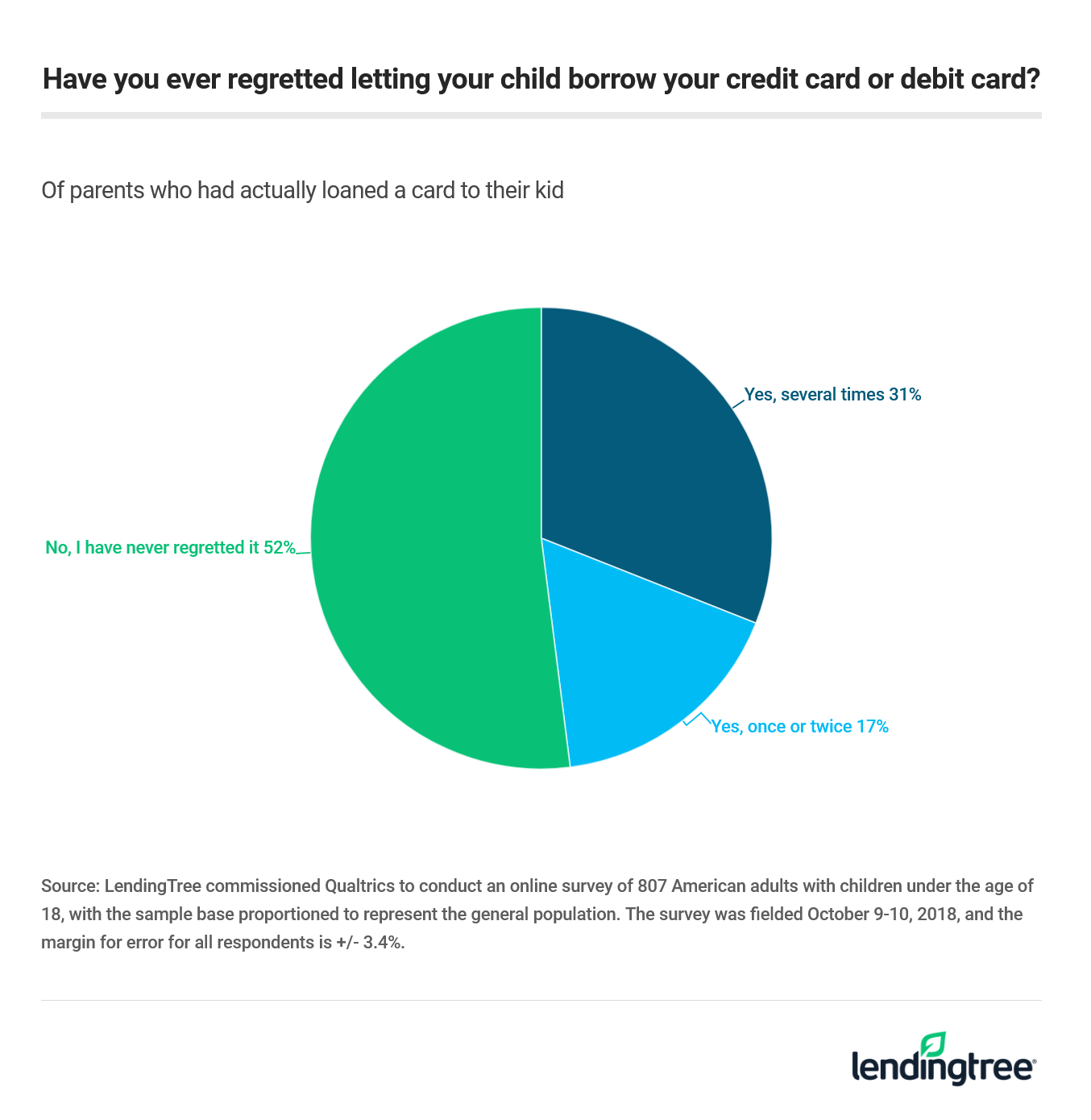 29% of Americans with kids under 18 said that their child had used their card without their permission, and men are the most likely to say they’ve been burned.

Our polling clearly shows that parents who knowingly lend their card to their kids aren’t the only ones getting burned. While most parents want to think the best of their child, the reality is that nearly 3 in 10 Americans with kids under 18 (29%) said their child had used their credit or debit card without their permission to buy something online.

Again, men are far more likely than women to say they’ve been victimized. Forty-four percent of men said so, compared with just 19% of women.

The perfect age to get your first credit card: 21 years old.

When should someone get his or her first credit card? The median answer was 21 years old. That was also the most commonly given answer, though nearly 10% of respondents say they believe people should never get a credit card.

At what age did Americans actually get their first credit card? Again, the median answer is 21 years old. The most common answer, however, was 18 years old, given by 22% of respondents.

That split isn’t too surprising, though. The Credit CARD Act of 2009 made it harder for those under 21 to get a credit card, requiring the young person to either provide proof of income to the issuer or have an adult cosign with them for the card. That means that the days of banks offering free pizza and frisbees to college students who sign up for a free credit card are long past – which is a good thing – but it also means that many people don’t have their first experiences with handling credit until later in life. It’s clear in our polling that many Americans see that as a good thing, too.

7 in 10 Americans said their parents were good financial role models, but younger Americans were most likely to disagree.

Though most respondents said their parents were good financial role models, some groups were more likely to go a step further and call their elders “very good” money role models.

The connecting factor among all those groups is money. Each of the majority cohorts is likely to be more affluent than their counterparts, so it stands to reason that members of that group would be more likely to credit their elders for having taught them well.

Not everyone sang praises for parents, however. The younger you are, the more likely you are to say that your parents/guardians were “bad” financial role models. About 1 in 5 (18%) of those below age 37 — millennials and Generation Zers — said that, while just 13% of Generation Xers and baby boomers said the same. The memory of coming of age in the shadow of the Great Recession likely helped color those generations’ negative views.

69% of parents with kids under 18 said that at least one of their minor children had at least one financial account. Savings accounts were the most common choice.

We asked parents under 18 if any of their minor kids had one or more of the following accounts: a savings account, a checking account, a credit card, an investment account or some other financial account.

More than two-thirds of parents said their kid had at least one of those accounts. Of those parents:

Across the board, men were more likely than women to say their kid had at least one of these accounts. The difference was most stark with credit cards, with 38% of men saying their kid had a credit card account versus just 16% of women.

The wealthiest Americans were twice as likely as other income groups to say they had given their kid a credit card (43% of $100k+ earners versus no more than 20% of folks at any other income level).

Typically, you can’t get a credit card in your own name until you are 18 years old. Even then, it can be challenging given that you must show proof of income or get a cosigner if you are under 21. However, that doesn’t mean that a parent can’t give his or her child access to a card. The most common way to do that is to make your child an authorized user on the card.

As an authorized user, your kid may get a card with his name on it, but all the responsibility for paying that card’s balance is on you, the primary accountholder.

It’s a risky move — especially given how many parents say they’ve been burned by their kids’ purchases — but parents are often willing to do it because making a kid an authorized user can jump-start a kid’s credit history. That’s because when you are added as an authorized user on a credit card, typically, the payment history associated with that account will also appear on your account. If the card’s primary account holder has excellent credit, sharing that credit history can help a kid go from having no credit to good credit very quickly. (Card issuers’ policies vary on how they handle authorized users, however, so be sure to understand what you’re getting into before you make that move.)

The bottom line: How do you mix kids and cards?

As any parent can tell you, there’s no one-size-fits-all answer when it comes to kids, and that’s certainly true when money is involved. Some 10-year-olds are mature enough to handle a credit or debit card to buy themselves a toy on Amazon, while some 17- and 18-year-olds are so untrustworthy that you wouldn’t dare let them within 100 feet of your plastic. Our survey clearly shows that a lot of parents have taken a chance on their kid and been burned.

If you’re considering making your kid an authorized user on your credit card, it is your responsibility to sit down with your kid and make sure that he understands what that means and what the consequences will be if things go south.

You should have a similar conversation if you lend your kid your credit card. Clearly communicate expectations, boundaries and consequences. It’s much easier to have that conversation in advance when all is well than to do it after disaster has already struck.

If something bad does happen, such as your kid using your card without your knowledge or permission, communication is still the key.

Obviously, much will depend on the depth and severity of the incident, but in any case, consequences need to be clear, as does your disappointment in their actions. You can also use the incident as a teachable moment, helping the child fully understand the ramifications — financially or otherwise — of his actions.

Despite the inherent risk, it’s good to introduce kids to money concepts and conversations early in life. Yes, your sons and daughters are going to make mistakes, and unfortunately, they may even try to take advantage of you sometimes. But the most important thing is to let the kids make those mistakes while the stakes are low and to teach them the consequences for those mistakes. That way, ideally, they’ll learn from what they did and carry that with them when they’re older and their financial decisions really do matter.

LendingTree commissioned Qualtrics to conduct an online survey of 1,500 Americans, with the sample base proportioned to represent the general population. The survey was fielded Oct. 9-10, 2018, and the margin for error for all respondents is +/- 2.5%.

About half of Americans with children under the age of 18 have let one of their kids borrow their credit or debit card to buy something online.