With Inflation Soaring, Half of Americans Think Loyalty Programs Are More Important Than Ever

Everyone loves a bargain or a deal — even more so during a period of rising prices — which is why 8 in 10 Americans are members of at least one loyalty program. In fact, half of consumers say that retail, food and other loyalty programs are more important than ever, according to the latest LendingTree survey of nearly 2,100 Americans.

The top reason to sign up? The ability to earn points, say three-quarters of respondents, translates to discounts, freebies or other perks.

Keep reading to see which loyalty programs are the most popular, which demographics are most likely to sign up, and get expert tips for deciding if a loyalty program is right for you.

Loyalty programs reward and incentivize customers to shop with a particular store or brand. Consumers can usually get perks, discounts and other benefits for signing up or registering as a member — and for free, in many cases. Loyalty programs are prevalent across multiple industries, including retail, travel, food and dining and more.

As people look for ways to save money to offset rising prices, 50% of consumers say loyalty programs are more important than ever.

“They’re right,” says Matt Schulz, LendingTree chief credit analyst. “With the cost of seemingly everything getting more expensive by the day, the perks that can come from a loyalty program can be really helpful.”

Whether you’re talking about free shipping, a free sandwich, discounts on cat or dog food or anything else, every little bit can help.

Loyalty memberships by the numbers

Loyalty programs are super-popular with Americans — 8 in 10 say they’re members of at least one. That percentage jumps to 94% among those with an annual household income of $100,000 or more, compared with 73% who make less than $35,000.

“Unfortunately, that means that many of the folks who most need the help that some of these loyalty programs offer aren’t taking full advantage,” Schulz says.

Loyalty programs are the most popular in the following categories:

“It’s great that people aren’t just taking advantage of high-profile, big-ticket loyalty programs, such as those offered by hotels and airlines,” Schulz says. “The truth is that smaller, regular purchases at grocery stores, restaurants, pet shops and drugstores can add up to real meaningful rewards in a pretty big hurry. With rampant inflation, that matters.”

Loyalty programs do draw repeat customers, with 72% of members saying they shop more at companies with loyalty programs. However, that doesn’t necessarily mean people spend more. 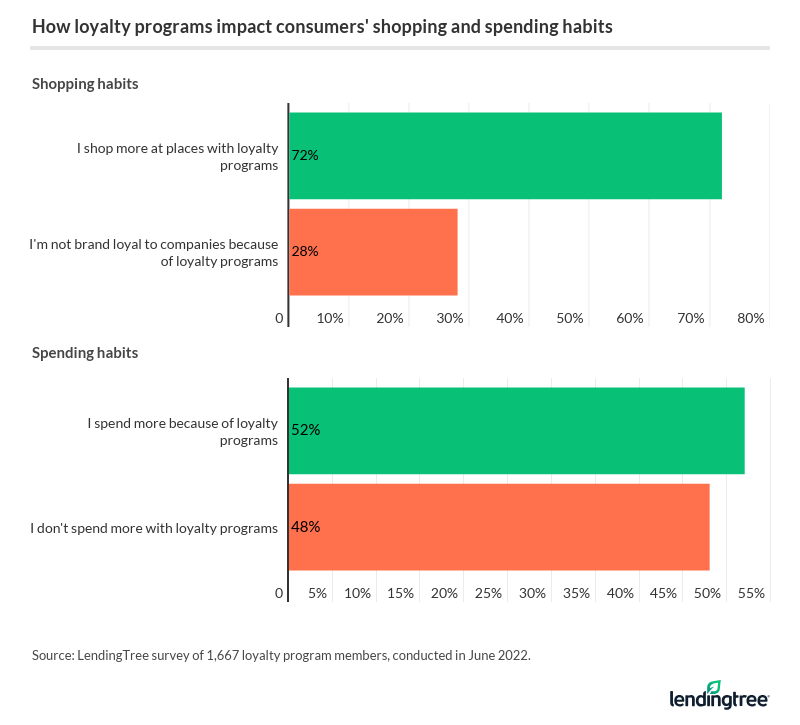 And that may indicate that shoppers are using these programs wisely, Schulz says.

“Retailers love loyalty programs because people who sign up for them are more likely to become regular customers,” he says. “That return business makes these programs a big win for retailers, even if customers don’t go overboard and spend extra when they’re there.”

Considering that a May 2022 LendingTree survey found that 1 in 4 Americans were boycotting a product or company, brands need to do all they can to stay on customers’ good sides.

“Over the years, many companies have gotten smarter about what they offer in these programs, doing a better job of catering to the specific needs and wants of their customer base in a way that more general rewards programs can’t,” Schulz says. 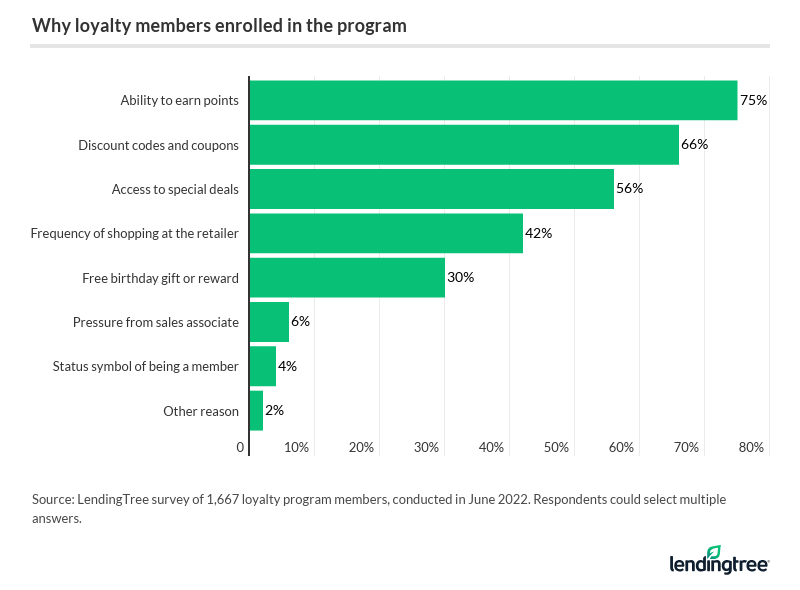 But just because someone joins a loyalty program doesn’t mean they’ll be loyal forever, as respondents shared various reasons why they might leave. Interestingly, more consumers would leave a loyalty program over a perceived lack of rewards (52%) than those who would leave because of a data breach (41%).

“News of data breaches has become white noise to millions of Americans,” says Schulz, adding that some people barely even notice.

On the other hand, a great loyalty program can certainly drive someone to change the businesses where they spend their money.

“Better discounts, shorter routes to earning free stuff, exclusive deals — these are all things that can help someone extend their budget and could absolutely get people to change their habits,” he notes.

Half of loyalty program members signed up at checkout counter 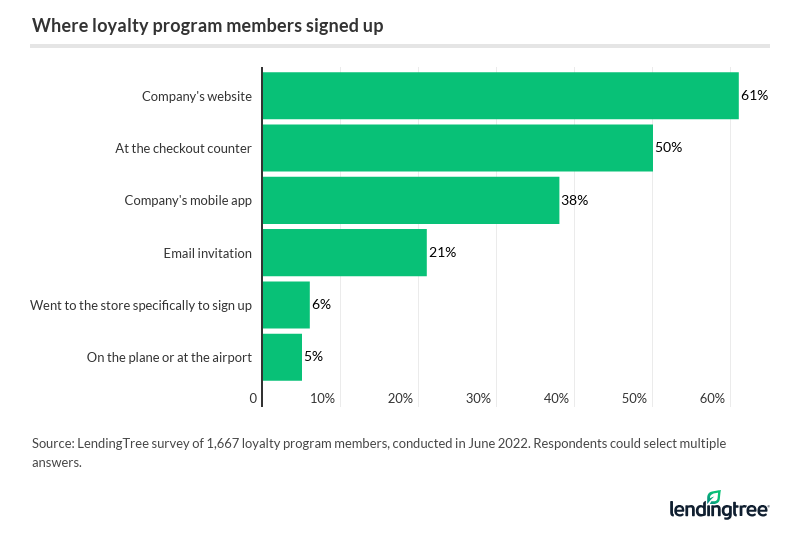 Ultimately, people sign up in the most convenient way for them, and not because they feel pressured — just 5% of Americans say a sales associate talked them into joining a new program. The other reasons given for joining a loyalty program include:

Are loyalty programs right for you?

Joining a loyalty program is often a no-brainer, especially if it doesn’t cost you anything but a couple of minutes to join. Scanning your loyalty card or giving your phone number or email can equate to special discounts and savings.

That said, you don’t have to join every loyalty program — as an example, if you only make a one-off purchase. Here are three things to keep in mind when signing up for a loyalty program:

LendingTree commissioned Qualtrics to conduct an online survey of 2,082 U.S. consumers, fielded June 10-14, 2022. The survey was administered using a nonprobability-based sample, and quotas were used to ensure the sample base represented the overall population. All responses were reviewed by researchers for quality control.

With Inflation Soaring, Half of Americans Think Loyalty Programs Are More Important Than Ever

Everyone loves a bargain or a deal, which is why 8 in 10 Americans are members of at least one loyalty program.