Nearly 2 in 3 Americans don’t know that your payment history is the most important factor in determining your credit score, according to a new report from LendingTree.

Your credit score is enormously important. A lousy one can cost you thousands of dollars over your lifetime in the form of higher interest rates on credit cards, autos and mortgages among other things.

With that in mind, LendingTree surveyed Americans on their knowledge and opinions of credit scores. The questions ranged from the basics of credit scoring and some of the myths that surround them to what they would give up in order to get a great one.

The survey results made clear that while many Americans have dutifully checked their credit score in the recent past and know how important it is to their financial health, most of us still aren’t sure about what factors and behaviors play into the making of a credit score.

Confusion reigns about what matters most with credit scoring

Whether the credit score comes from FICO® or its competitor VantageScore, the factor that carries the most weight in determining your score is the same: your payment history (or how often you’ve paid your bills on time).

Ultimately, the goal of any credit score is to help lenders decide whether a potential borrower is likely to pay them back in a timely fashion. With that in mind, it makes sense that credit-scoring formulas put such a large emphasis on your ability to pay your bills on time. Of course, past results are no guarantee of future performance, as the saying goes, but payment history has long been the biggest factor in credit-scoring formulas, and there’s no reason to expect that to change anytime soon.

When calculating the formula for your FICO Score, payment history makes up 35%. The other factors that play into the formula include: amounts owed, including your ratio of debt-to-available credit (30%); length of credit history (15%); the mix of types of credit you have (10%); and how much new credit you have (10%). To gauge survey respondents’ understanding of credit-scoring basics, we listed the above factors – as well as your debt-to-income ratio, which is not included at all in formulas – and asked them to pick which one mattered most.

The chart below shows how their responses broke down: 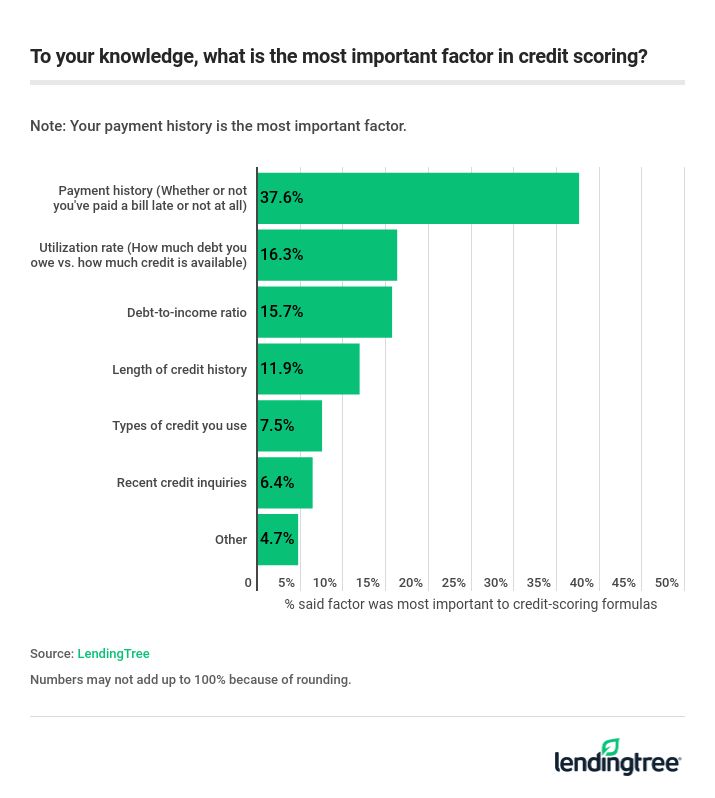 It is encouraging that nearly two-thirds of respondents picked one of the three best answers. However, fewer than 4 in 10 respondents (38%) picked the exact right response, and nearly 1 in 6 respondents (16%) picked one that isn’t a factor at all – debt-to-income ratio.

The power of myth

Credit-scoring myths are everywhere, and over the years, they’ve proven incredibly difficult to dispel. Two of the most common are that checking your credit score will hurt your credit and that carrying some debt will help your credit score. Our survey results are further proof that these two myths are alive and well. 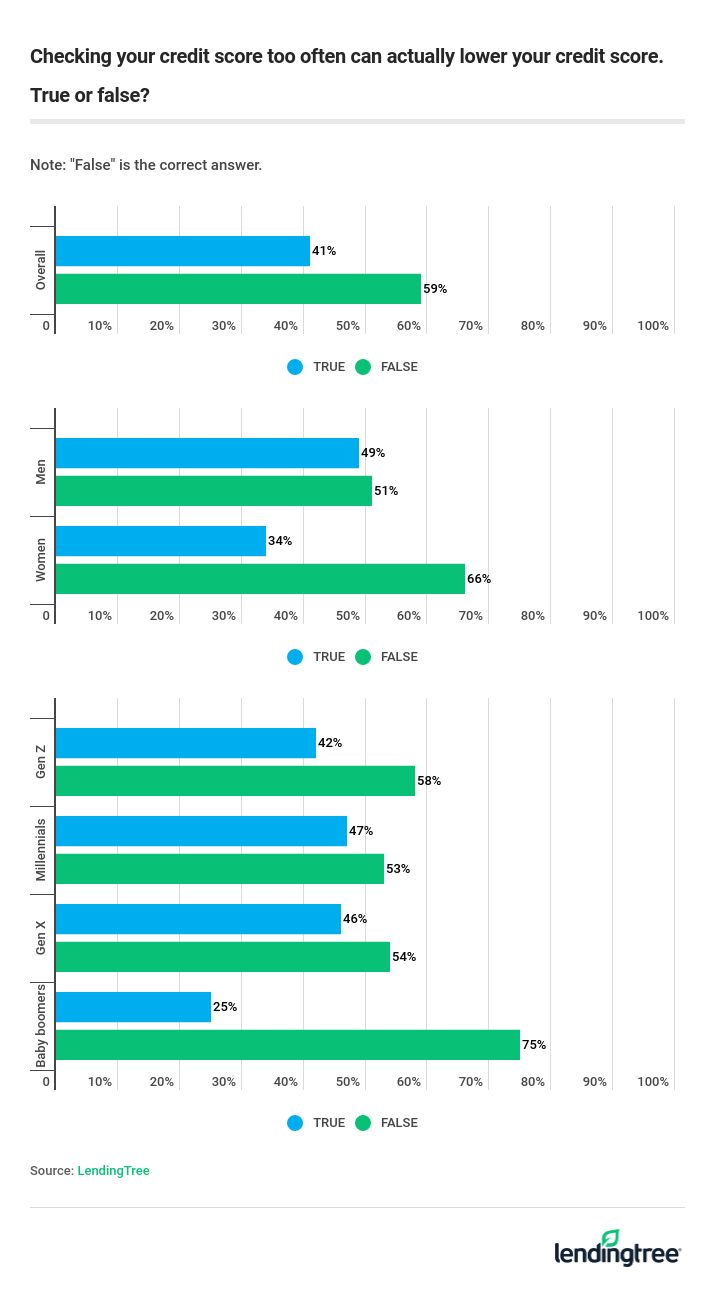 Another myth we’d like to bust is that you should hold off in paying down debts because paying off your debts too quickly could hurt your credit score. With an installment loan, for example, you should pay your bill on time every time, and even consider paying the balance off early, if you’re within your means to do so. With a credit card, your focus should be on paying your balance off as soon as possible and if needed, consider a balance transfer credit card if you’re facing a high APR with your current credit card. The objective for anyone with a credit card is to pay your balance off each month, in full. If you can’t do that, pay as much as you can in order to keep your debt-to-available-credit ratio (also known as your credit utilization rate) as low as possible. Low utilization and timely payments are two of the best ways to improve your credit score.

What we’d give up for great credit

There’s no magic to getting a good credit score. It’s about doing the right thing over and over for years. It’s about paying bills on time every time, keeping balances low and not applying for too much credit too often.

But, just for fun, what if there was a magic spell conjuring great credit? What if you were granted a permanent 800 credit score in exchange for giving up one leisure activity forever? As the below chart shows, most Americans would be happy to try. 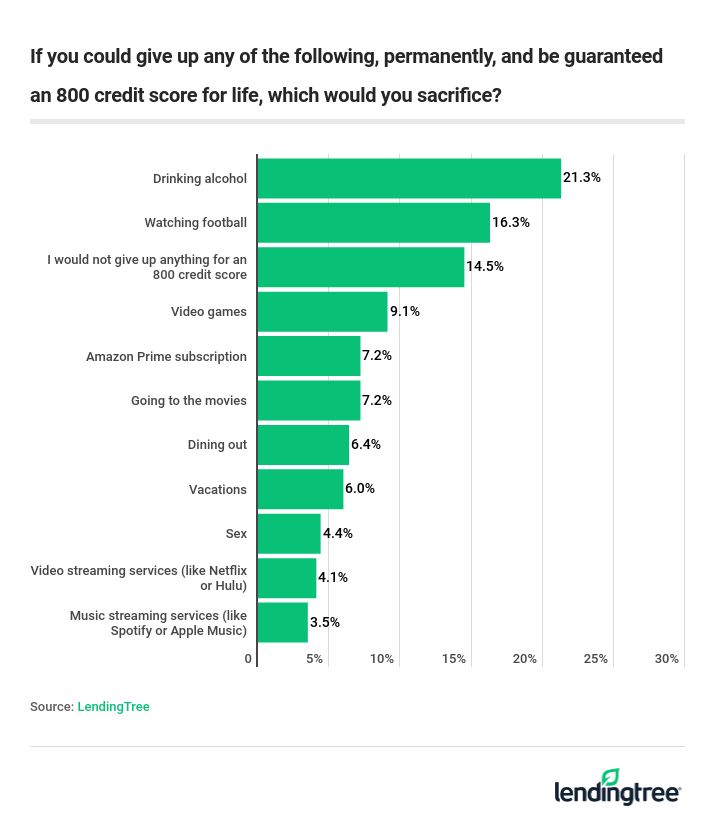 More than 8 in 10 respondents (86%) said they’d give up one of the options we provided in order to have an 800 credit score for the rest of their lives.

The three most common sacrifices for men and women were similar, though there were a few variations. For men, surrendering alcohol was most popular (24% of men chose that), followed by giving up watching football (12%), playing video games and having an Amazon Prime subscription (9% each). For women, watching football was the most commonly-chosen sacrifice (20%), followed by drinking alcohol (19%), playing video games (9%) and going to the movies (7%).

Whether you have a great credit score or not-so-great credit, taking the time to learn a bit more about what factors are considered in calculating your credit score is a good idea.

It’s not about knowing every little detail or every tiny nuance that can move the needle. If you simply know the broad strokes of credit – things like why it matters, what the biggest factor is that influences your score and why some common myths are false – you’ve strengthened your foundation for future financial success. Then, the next time you apply for a credit card, a car loan or a mortgage, you’ll be able to make a more informed decision and feel more confident in being approved at the best possible rate – and there’s no price tag you can put on that.

LendingTree commissioned Qualtrics to conduct an online survey of 1,241 Americans, with the sample base proportioned to represent the overall population. The survey was fielded Feb. 7-12, 2020.

Nearly 2 in 3 Americans don’t know that your payment history is the most important factor in determining your credit score.