North Carolina cardholders generally fall in the middle of the pack nationally when it comes to credit card debt, according to a new report from LendingTree.

However, Tar Heel State cardholders fare a bit better when compared to their neighbors in the southeastern United States.

LendingTree reviewed anonymized credit report data from more than a million of its registered users to get an overview of credit card debt in America today. Data included overall debt totals, card ownership, utilization and delinquency rates and the propensity for maxing out credit cards.

In all of these categories, North Carolina cardholders fared reasonably well. They were never among the highest on any one list, nor were they ever among the lowest. While their situation isn’t dire, there remains plenty of room for improvement.

Below is a breakdown of credit card debt statistics in North Carolina. We compared the state to others throughout the nation, including a special focus on those states that share a border with the Tar Heel State. However, we also looked at data for the state’s biggest metropolitan areas to see how they compared to one another. (Spoiler alert: If you’re from Fayetteville, N.C., you may not want to look.)

Finally, we reviewed some of the most commonly asked questions around credit card laws in North Carolina. There can be big differences among the states when it comes to those regulations, so we provide some answers below. 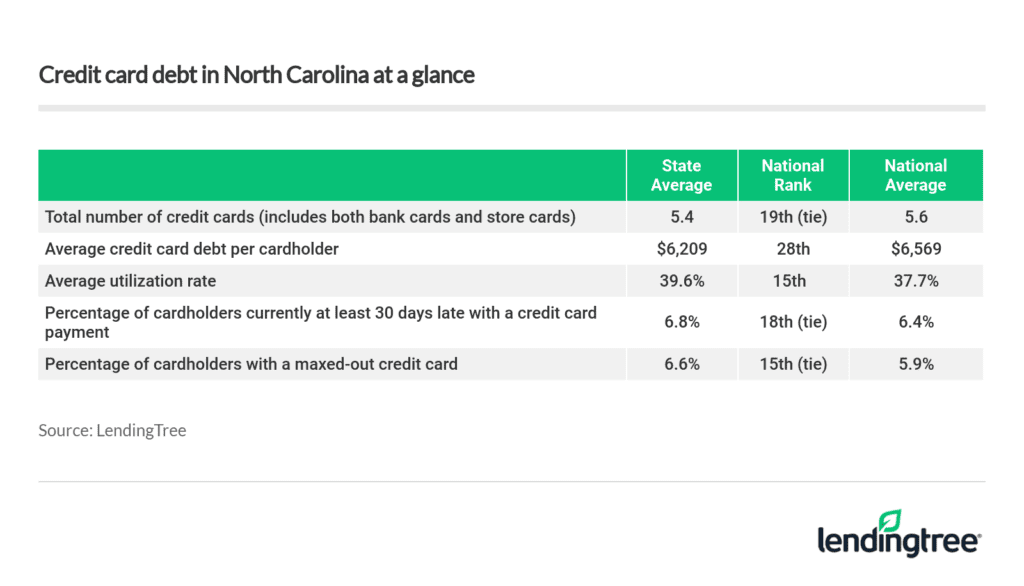 How much credit card debt does the average North Carolinian have?

That’s well below the national average of $6,569 and ranks the Tar Heel State 28th in the nation.

What percentage of North Carolinians are currently at least 30 days late with a credit card payment?

Despite the state’s relatively low debt total, North Carolina comes in above the national average (6.4%) when it comes to late payments. The state’s cardholders rank 18th nationally.

How many credit cards does the average North Carolinian have?

The state comes in just below the nationwide average of 5.6 cards per cardholder.

That is definitely higher than any credit expert would recommend, but it is the reality in North Carolina. It is troubling because your utilization rate — your balance compared to your available credit — is the second-most important factor in the FICO credit-scoring formula. Only your payment history matters more.

What percentage of North Carolinians currently have a maxed-out credit card?

That’s well above the national average of 5.9% and puts Tar Heel State credit cardholders in tie with Texas for 15th place nationally.

Given the state’s high utilization rate, it shouldn’t be surprising to see that it also has a higher-than-average percentage of maxed-out credit cards. However, it is still troubling.

How do North Carolina cardholders compare to their neighbors?

While North Carolina residents rank in the middle of the pack nationally in most categories related to credit card debt today, they fare a bit better when compared to their closest neighbors.

We compared North Carolina to the states it borders — Georgia, Tennessee, Virginia and South Carolina. While those five states are similar when it comes to card ownership, North Carolinians rank second-to-lowest in the group for overall card debt, utilization rate, late payments and maxed-out credit cards.

The most eye-opening stat? Virginia’s average credit card debt is $7,442. That’s about $1,200 more than North Carolina.

Which North Carolina cities have the most and least credit card debt?

Wilmington cardholders have the highest credit card debt of any of the biggest metropolitan areas in North Carolina, just edging out Charlotte. Greensboro and Durham are at the bottom of the list — the only two of the state’s biggest cities to have less than $6,000 in card debt. 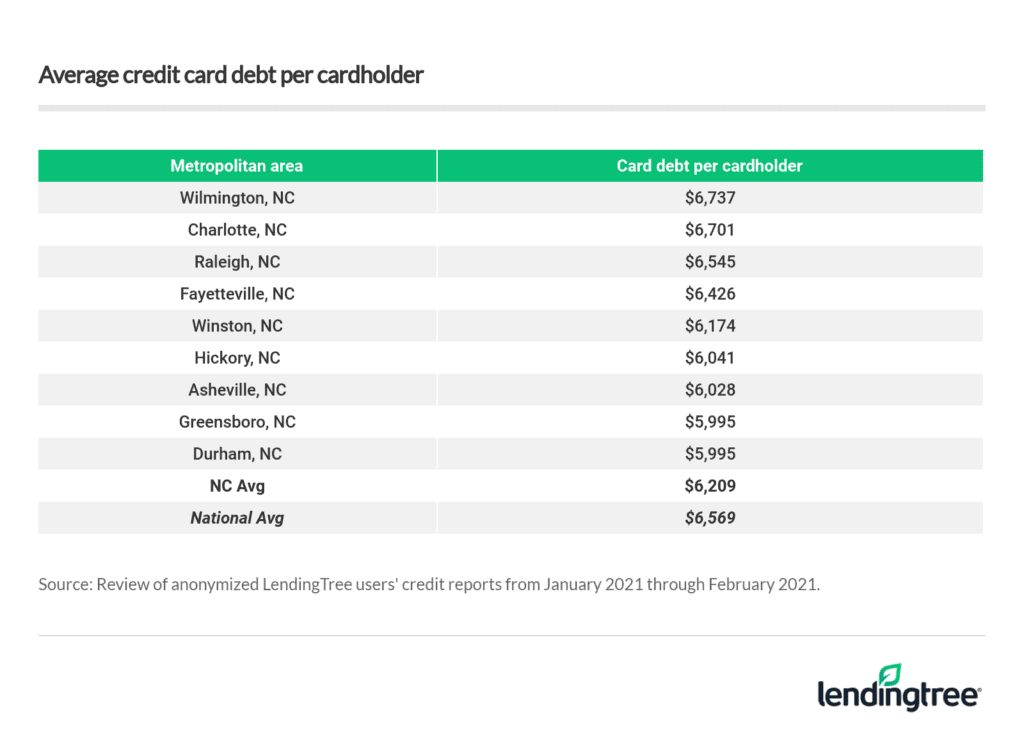 Which North Carolina cities have the highest and lowest percentage of cardholders who are at least 30 days late with a card payment?

That bodes poorly for Fayetteville residents when it comes to their credit scores. The single-most important factor in FICO credit-scoring formulas is your payment history, meaning how consistently you pay your bills on time. Just a single payment that is more than 30 days late can do considerable damage to your credit score, so your best move is to avoid paying late whenever you can. 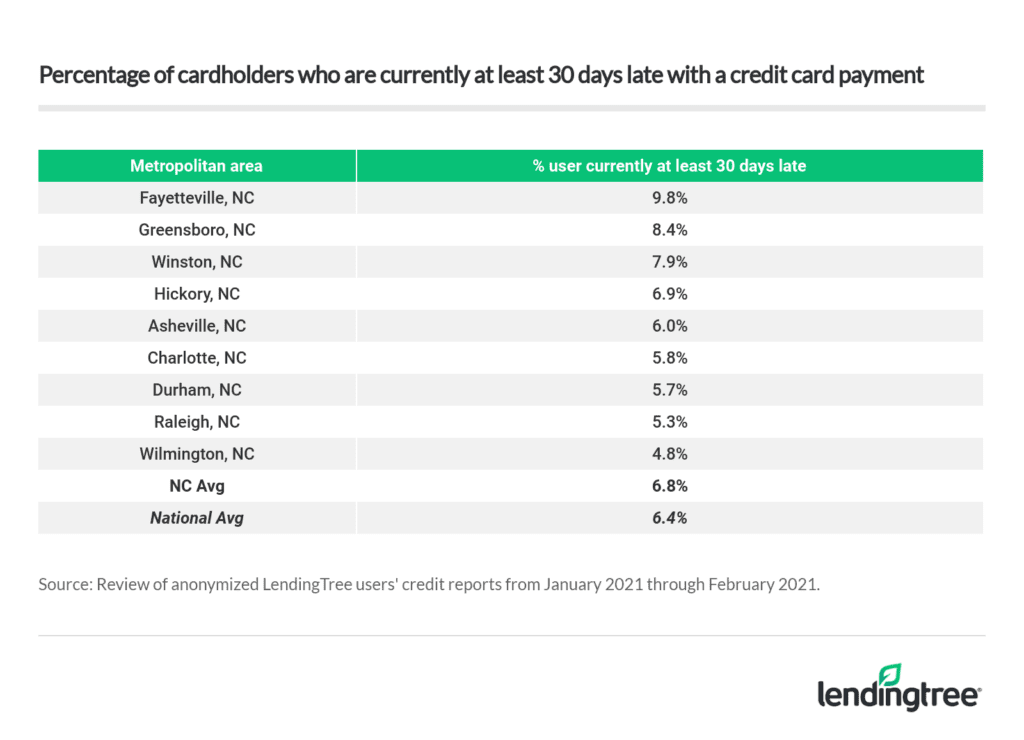 Which North Carolina cities have the most and fewest credit cards?

There’s not much difference between the top and bottom of this list, but cardholders in Hickory have the most cards on average (5.8 per cardholder), while Asheville cardholders have the fewest (5.2). 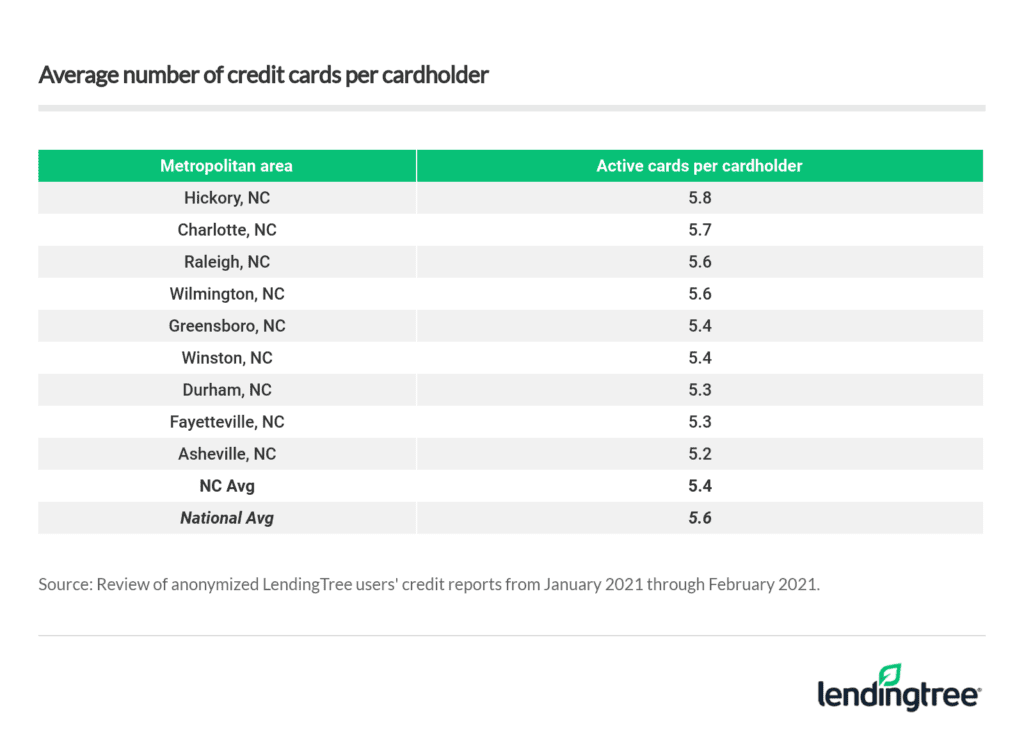 Which cities have the highest and lowest credit card utilization rates in North Carolina?

More bad news for Fayetteville cardholders. That city’s residents have the highest utilization rate among the Tar Heel State’s biggest metropolitan areas at 48.3%.

Meanwhile, cardholders in Wilmington have the state’s lowest rate at 32.4%.

A 48.3% rate like the one seen in Fayetteville means that city’s residents’ balances equal nearly half of their available credit. That is likely to take a major toll on your credit score — since, again, your utilization rate is the second-most important factor in FICO scoring formulas — but it also leaves you very little margin for error financially. 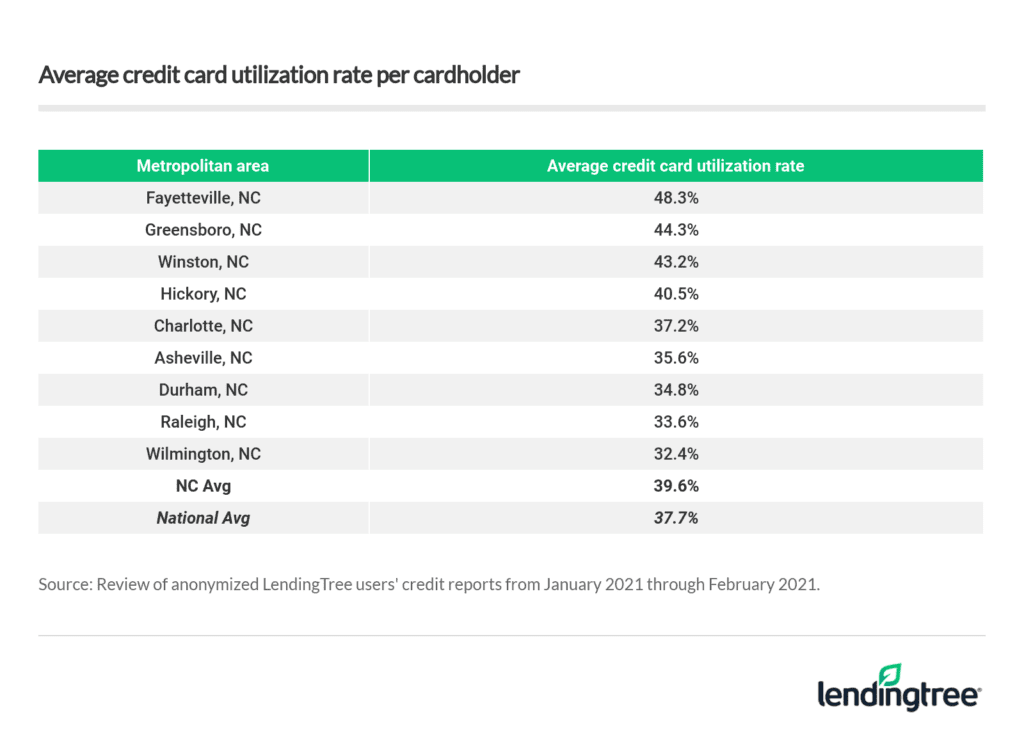 Which North Carolina cities have the highest and lowest percentage of cardholders with a maxed-out credit card?

Cardholders in Fayetteville are the most likely to currently have a maxed-out credit card. That’s not surprising, given the city’s high utilization and delinquency rates, but it is still eye-opening. About 9% of Fayetteville cardholders have a maxed-out card, while the average for the rest of the state is 6.6% and the national average is just 5.9%.

The state’s lowest percentage can be found in Raleigh at 5.0%. 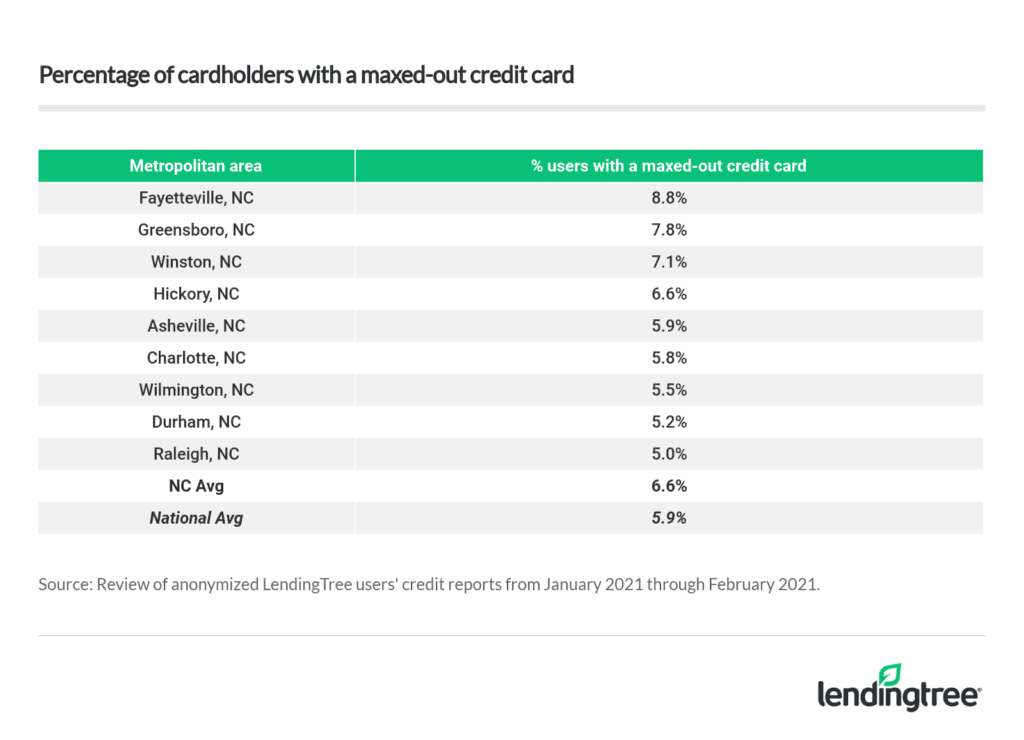 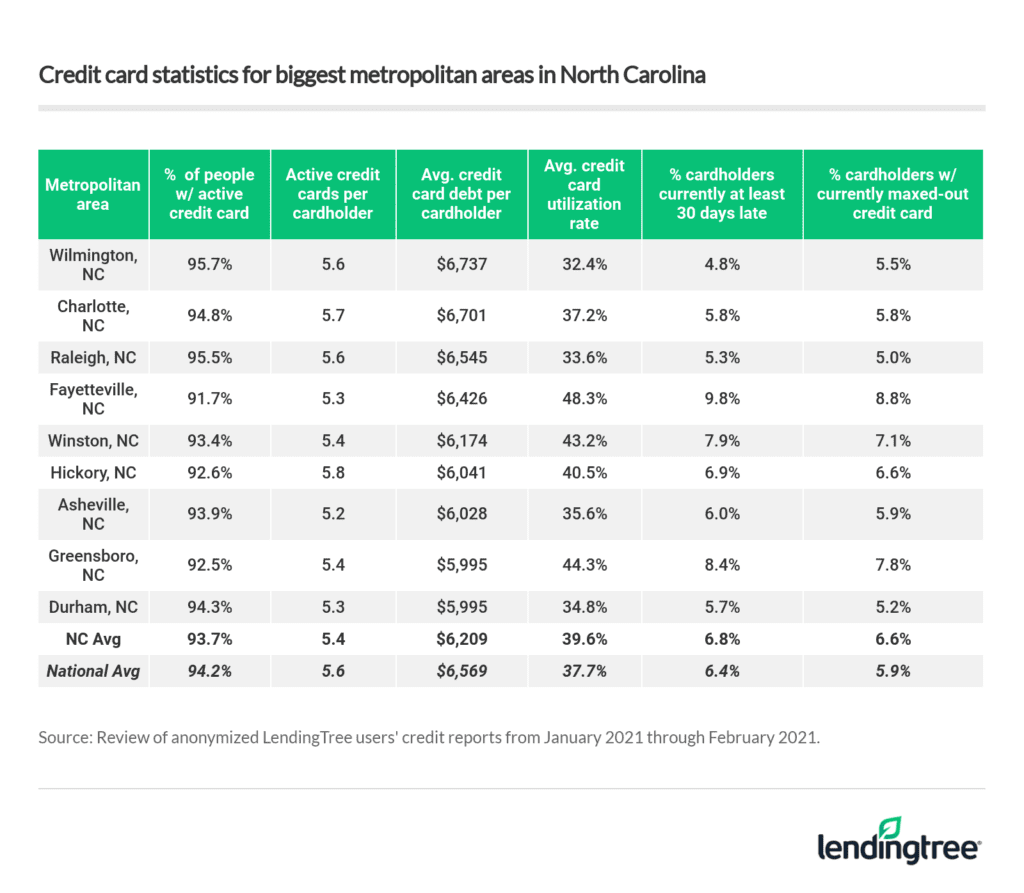 There can be big differences in credit card laws from state to state. Below are answers to some of the most commonly asked questions about card debt in North Carolina.

What is the statute of limitations on collecting credit card debt in North Carolina?

However, it is important to understand that collectors can still ask for the money owed even after the statute of limitations has passed and that any subsequent payment on that delinquent account can restart the clock and make that debt fair game for collectors once again.

Can your wages be garnished for credit card debt in North Carolina?

No, they cannot, generally speaking.

North Carolina is one of the few states that doesn’t allow for wages to be garnished for credit card debt, even after a court judgment.

However, creditors may be able to get a judgment allowing them to garnish funds directly from your bank account.

That means that merchants in the state are able to tack on an extra fee for customers who choose to pay with a credit card.