Despite an overall reduction in credit card debt in the U.S. during the coronavirus pandemic, the percentage of cardholders in America’s biggest metros with balances of $10,000 or more has risen slightly since 2019, according to new data from LendingTree.

Once again, the metro with the highest percentage is Bridgeport, Conn.

LendingTree analyzed anonymized credit report data from more than 2.5 million LendingTree app users to see which of the 100 largest metros have the most credit cardholders with five-figure balances. What analysts found is that most of the metros with the highest percentages of people with five-figure credit card debt are clustered along the East Coast, while the metros with the smallest percentages were most likely found in the Rust Belt or the South.

That doesn’t mean that everyone’s debt went down, though. LendingTree’s latest report shows that the percentage of Americans with five-figure credit card debt grew from 15.5% in 2019 to 17% in 2021.

The growth wasn’t huge — just a percentage point and a half — but it’s still significant, especially during an economically volatile time like the one we’re currently facing.

The 5-figure credit card balance capitals of the U.S.

Just like in the previous report, Bridgeport, Conn., led the nation’s biggest metros in the percentage of cardholders owing $10,000 or more in card debt. Other big East Coast cities — Washington, D.C., Miami and New York — weren’t far behind, nor was Oxnard, Calif. 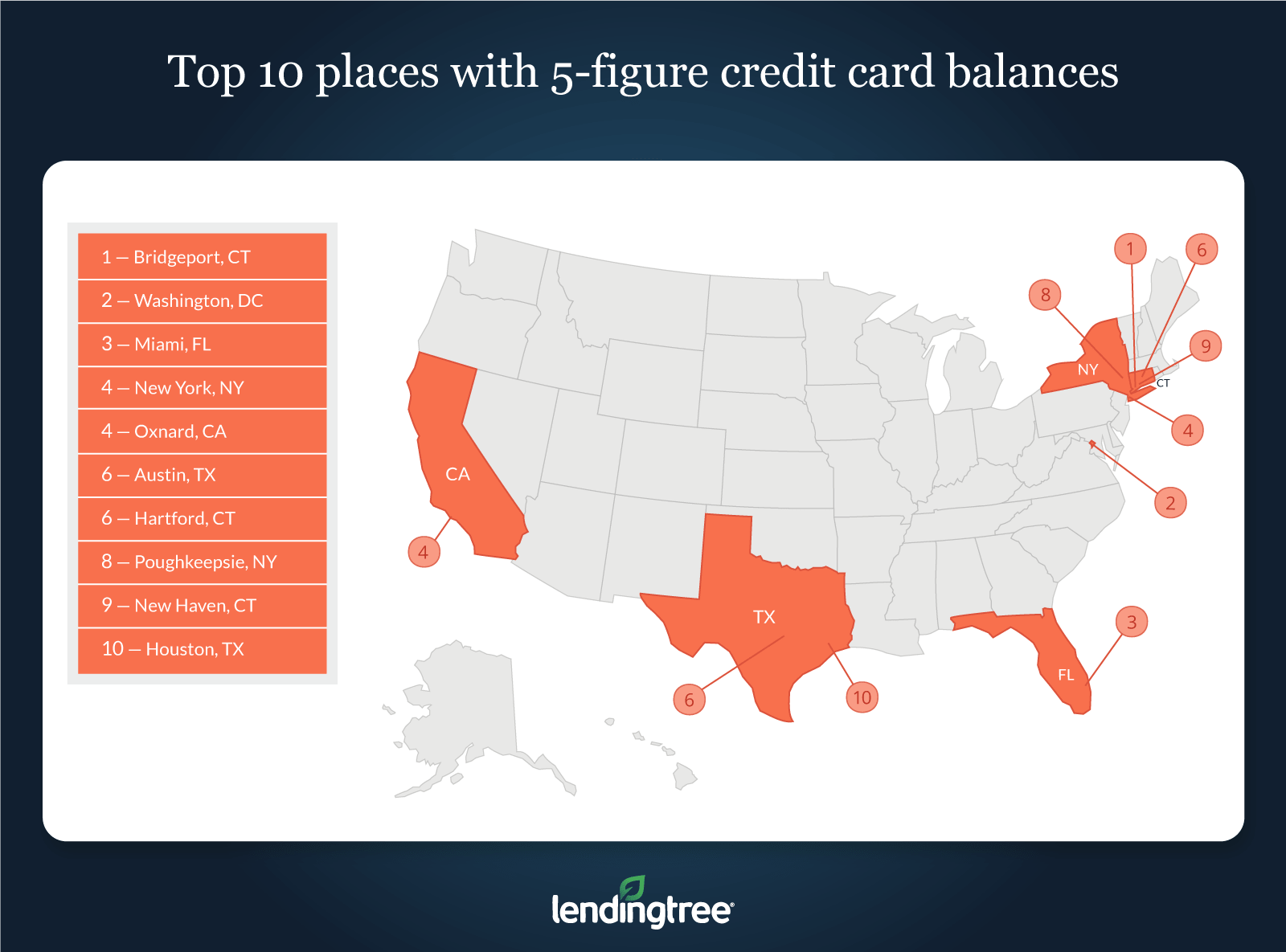 Bridgeport’s metropolitan area includes Greenwich, Conn., one of the wealthiest communities in the nation. Washington, D.C., and New York have some of the nation’s highest per capita incomes. Even Miami, which has a lower average income than many metros of its size, has a significant high-income population.

Still, it’s not just all about income. The truth is that the pandemic has amplified the financial hardships facing millions of Americans, leading many to rely more than ever on credit cards and pushing them to max out the cards they have.

A February LendingTree report showed that the percentage of credit cardholders with a maxed-out credit card shot higher in all but one of America’s biggest metros at the end of 2020. And if you’re maxing out credit cards, it may not take long until all those cards add up to five figures in debt.

While the saying goes that “everything is bigger in Texas,” that hasn’t traditionally been the case with salaries in the Lone Star State. The big metros in Texas have generally trailed behind the big coastal metros in that measure.

However, right now Texas is booming. Many of the state’s big cities have seen explosive growth, both in population and job creation. That has sent incomes shooting higher in some places. According to the Federal Reserve, for example, per capita household income in Austin grew from $51,484 in 2015 to $61,977 in 2019.

With that, according to LendingTree data, has come a big jump in the percentage of folks with big credit card debts.

That’s not the type of growth that Texas is looking for.

5-figure debt is rarest in the Rust Belt

Not all cardholders are seeing the growth that’s happening in Texas, though.

The metros with the lowest percentage of cardholders carrying five-figure balances — Toledo, Ohio, and Grand Rapids, Mich. — both headed the other direction.

These aren’t giant decreases, but they matter. 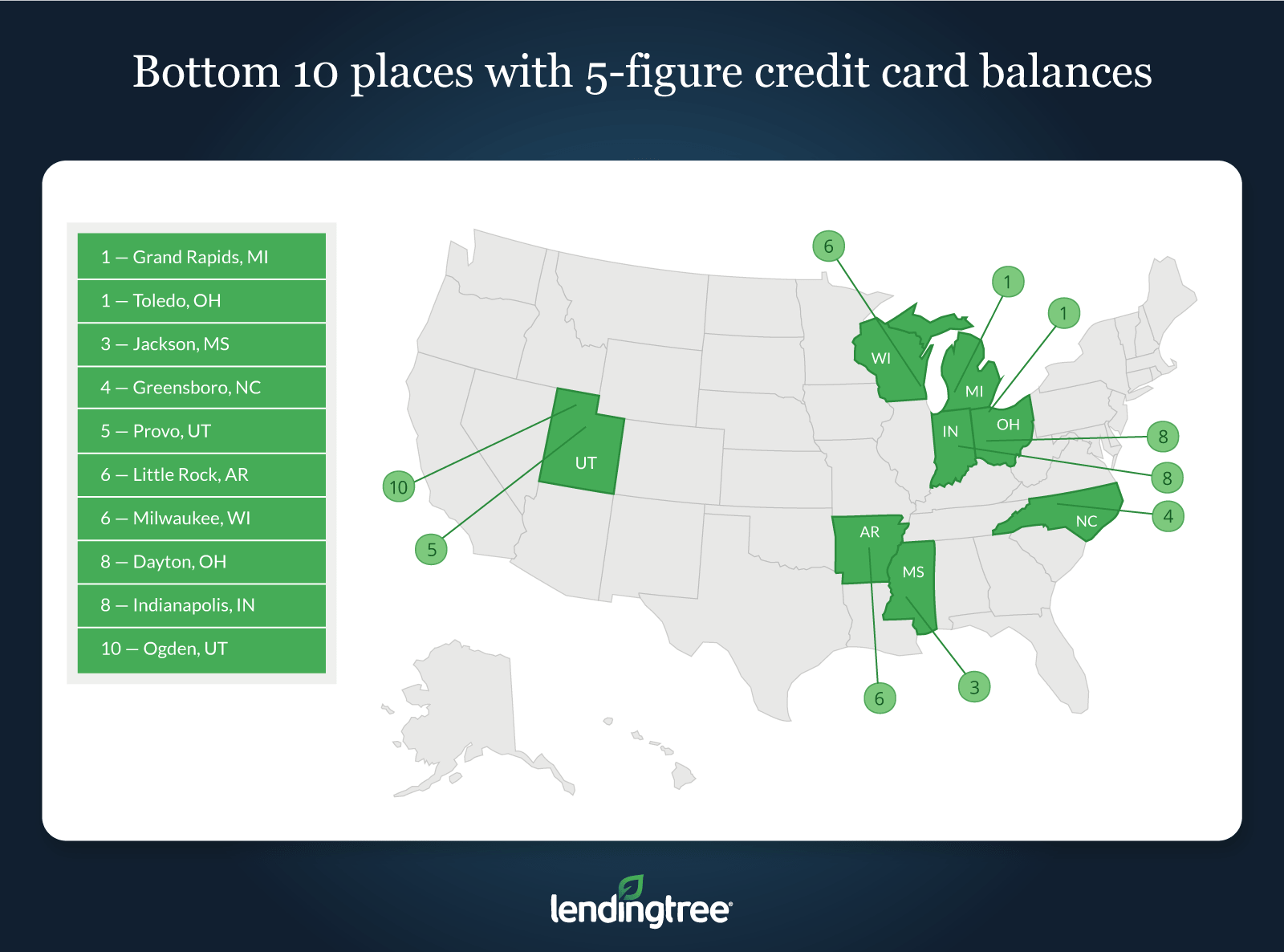 Again, income likely played a big role here. Most of these places have lower incomes than other bigger American metros.

However, it’s important to understand that high debt levels are only one indication of credit cardholder health. For example, 33.1% of cardholders in Milwaukee were maxing out their credit cards in December 2020, according to the previously mentioned LendingTree report. That was the highest percentage among the nation’s 100 biggest metros and a stark contrast to their strong showing in this five-figure debt report.

No matter where you live, focus on paying down that debt

I’ve been in the five-figure credit card debt club while living in a big, expensive city. It’s awful, and it pretty much consumes your life until you escape it. It took me about five years — and a couple of significant pay raises — to finally eliminate that credit card debt. More than 20 years later, the memories of that struggle are still fresh, and I hope never to return to that place.

If you’re still struggling with credit card debt, the worst thing you can do is nothing. Yes, life is crazy expensive in 2021, especially in places like New York, Los Angeles and Washington, D.C., but there are still steps that you can take to help yourself.